Tanner is a veteran combatant and cyborg. As such, his right arm is replaced by a powerful metallic, bionic arm, capable of near-superhuman feats of strength, as well as providing for a powerful projectile shooter in one of the fingers.

Despite these being very expensive equipment, Tanner somehow keeps three spare bionic arms at home, ready to replace any damaged ones. Tanner is often seen maintaining his bionic arm in good condition and he knows its workings in minute detail.

Tanner’s body has, furthermore, been modified to produce high amounts of endorphins, whenever he is heavily damaged or tortured. This is to keep him active as long as possible in combat and to make it impossible for enemy forces to extract any type of information from him.

Tanner has also been modified with a gas detector and analyzer. He is capable of detecting small presences of gas, providing a type of early warning system against gas attacks. His modified sense of smell is so acute that he can even detect differences in hot metals, and so, for example, could recognize and identify any particular vehicle, by smell alone on distance.

As a surviving vet Tanner is skilled in various military matters, armed and unarmed combat, demolition and driving.

Tanner is a cyborg and war veteran of the Genetic War. His rank was somewhere below Sergeant. He participated in several campaigns and was, like others, rebuilt for combat during the end of the war in ’08 after he had been severely damaged. He is also said to have a colorful past.

Tanner now works as a cab driver and bodyguard for hire in Zero City. This is one of the few domed and cloaked cities left on the continent, where it is always night time. Well, almost always, as Tanner arranged for it to let in sunlight one hour each day.

He insists that he is very good at being a bodyguard, but his track record speaks otherwise as his clients tend to die. He managed to build a romantic relationship with one of his clients, Alanna.

At one point, his reputation grew gaining the attention of Cen-Com, the city council. He was seen as the prime candidate for an exploration mission outside the domed city, and was coerced into taking the mission or loose all his civil privileges and rights. 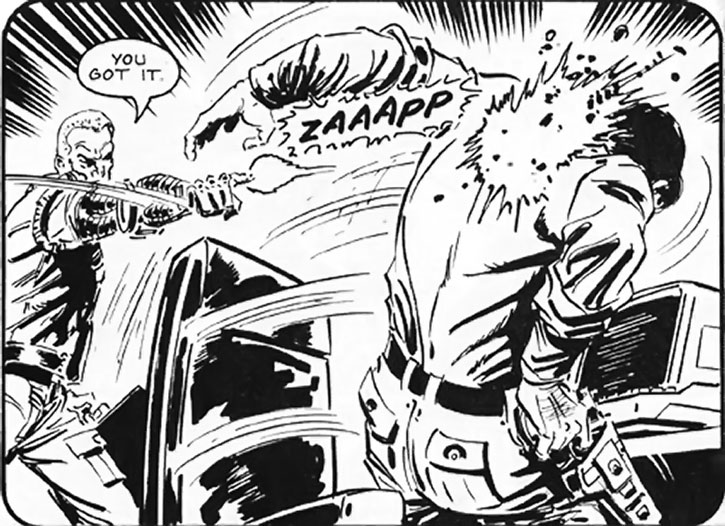 The mission was, of course, a suicide mission arranged by Mr. Nemo, a very influential man in the city and foe of Tanner.

The teammates assigned for this mission was a standard model combat android named Risa Pirea and a Rambo-like clone warrior named Gut 8. The android got her personality from the legendary radical feminist warrioress Risa Pirea, while Guttmeiner 856434, was an old clone until then kept in cryo-sleep, and a dumb war-oriented psychopath with super strength.

Tanner sent his goodbyes to Alanna, as it was clear that this was a dangerous mission.

Leaving the dome, passing through a savage jungle, and a shopping mall, the team encountered a group of freedom fighters. These freedom fighters, the Minervans, were a society based on Risa Pirea’s ideas. They fought the tyranny of Lord Mordred and his terrible airship.

Lord Mordred, however, was in reality the original Rise Pirea who had started a new life with more profitable ideas after the genetic wars.

The team, accompanied by Adoria — the security chief of the Minervans — snuck aboard the ship next time it appeared to demand taxes. But they were all detected and gassed.

The original Pirea was about to interrogate Tanner as to the exact location of Zero City since this offers an interesting target for future raids, when Adoria and Gut 8 broke free of their confinement. This distraction allowed Tanner and android Pirea to break free as well. As they all joined forces they easily overwhelmed the ship’s security forces.

Android Pirea, disillusioned and broken by seeing what the original Pirea had become, readily killed the human, ending the tyranny of Lord Mordred. Android Pirea planned to permanently turn off her own power after this, but was informed by Mordred’s former counselor that she, by killing the old leader, would now be expected to become the new leader of the airship.

Android Pirea, realizing the good she could do with such firepower, agreed to stay.

Tanner, having realized that he was sent to die by his old foe, Nemo, wanted to return to Zero City. The airship now set course for the domed city, and Tanner and gang climbed into the control tower on top of the dome, surprising the sleeping guard there. Tanner set up a connection to Nemo and threatened to level Zero City unless Nemo agreed to face Tanner one on one.

Nemo got one hour to arrange the meeting. He used this time to kidnap Alanna as an hostage. However, this was anticipated, and Android Pirea took care of the would-be kidnapper.

Failing his plans, Nemo agreed to then come meet Tanner. They met, but Android Pirea immediately recognized Nemo as a fellow robot and decapitated him. This, however, activated the countdown of the robot Nemo’s explosive body.

Ever ready, Gut 8, lifted up the robot and ran away with it, in order to protect the others from the detonation. Gut 8 thus sacrificed his life to protect his friends, but mostly Adoria, with whom he had fallen in love.

Intent on ending Tanner once and for all, Nemo, in his hidden base, donned a large combat armor. He soon ran into Tanner, who had figured out where the base was. Using the combat armor Nemo managed to delay Tanner and friends, until he could sneak away once more. However, while fleeing through the sewer system, he was eaten by a mutant giant worm.

With the threat of Nemo ended, Android Pirea and Adoria returned to the outlands and their new life with the airship. Meanwhile Tanner and Alanna remained in Zero City.

This old soldier still easily finds employers and so, he keeps on working with whatever comes along to this day.

Tanner is a large man with a crew cut and a cyborg right arm. He wears combat fatigues, a sleeve-less military jacket and a pair of black boots. Since his right arm is a weapon in itself, he carries no additional weaponry.

Tanner is a cool, stoic man. He has a sense of morals, and cares for the innocent, although he talks as if he doesn’t. His humor is caustic and cynic. He is also a casual killer and will kill anyone that threatens him.

He relaxes by reading books, and watches movies, which is very rare in Zero City.

He insists on following agreed upon rules, but, when facing overwhelming odds, he will try to escape to fight another day.

Tanner is also fond of quoting old movies. In fact, he is much like the archetype often portrayed by Clint Eastwood’s tough guy characters.

Alanna: “You’ve got to help me ! They’re after me ! They tried to kill me ! Quickly, step on it !”
Tanner: “Not until we have checked your credit card and CenCom has accepted your economy.”

Leroy: “What can I tell you ? I am impressed !” (Tanner has just killed a murderer)
Tanner: “And I’m impressed by you. Your co-habitee has just been killed and you are cold as a fish, as if you just watched a show.”
Leroy: “As I told you, I’m a New Age Neo-Buddhist. And there are more like her.” (Tanner punches Leroy out)

Tanner would fit perfectly in the post-Apocalyptic times of Kamandi and Hex.

Tanner would have been yet another military man, and could have met up with some vigilantes before the war. He would have been a candidate for support, recon and strategic planning work in other countries, working for either the US Army or the Suicide Squad.

His enhancements would probably have been provided for by LexCorp, STAR Labs or similar during World War III.

Advantages:
Misc. Advantage (Tanner’s body will produce high amounts of endorphins if he is heavily damaged or tortured, resulting in a sense of euphoria, and so any and all Interrogation attempts through a Physical pressure Maneuver or torture will have no effect whatsoever on him, 5 points). 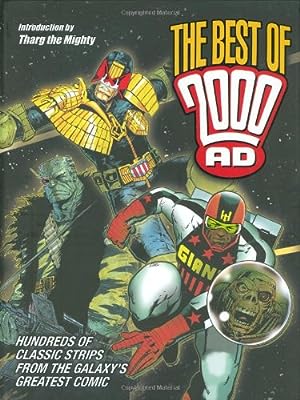 2000AD graphic novels in general, since AFAIK no Night Zero story was reprinted 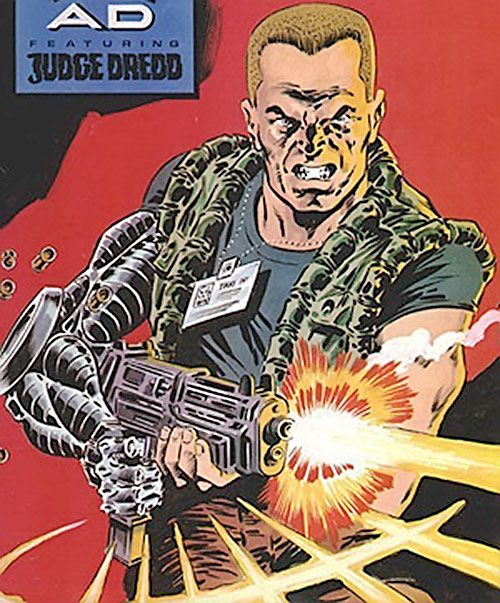 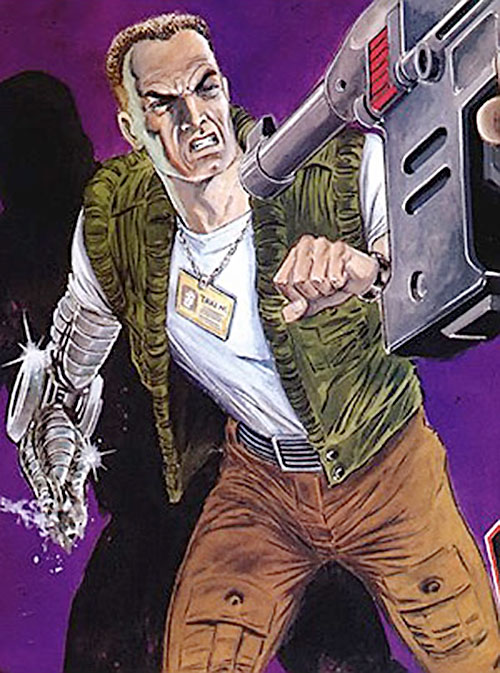 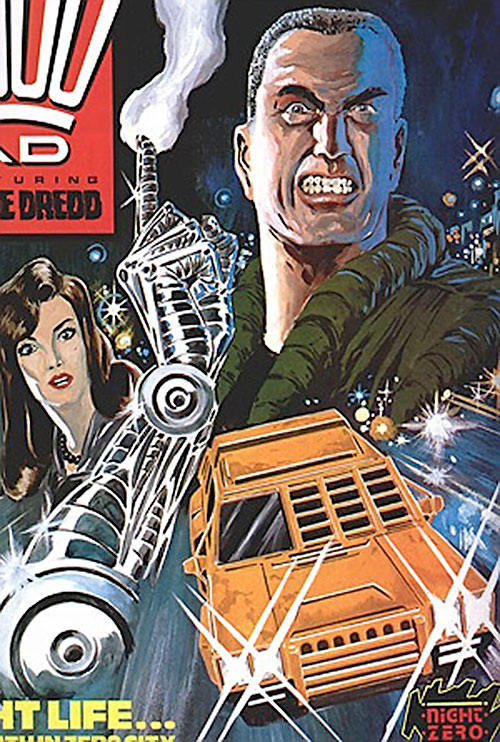 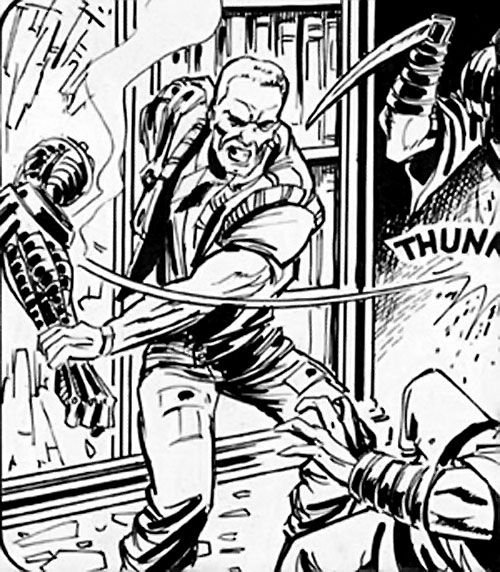