Nightcrawler (Kurt Wagner) was one of the 1975, international, All-New All-Different X-Men. This team would become the premier super-hero team for many years, and shape the Bronze Age of Comics .

Nightcrawler is a German mutant with teleportation and agility powers. His current profile is a gisted profile. It was primarily intended to benchmark his game stats back in the late 1990s or early 2000s (I forget).

Nightcrawler has a peculiar physiology. He can cling to surfaces, melt into shadows due to his fur’s characteristics, and has a 3½ feet prehensile tail. This tail, combined with an inhumanly flexible spine, allows him near-superhuman prowess in acrobatics.

Nightcrawler can also teleport, which is his main mutant power.

Kurt is the son of the shape-changer Mystique. She got rid of him shortly after his birth by throwing him off a cliff while being chased by a mob. According to some, his physique can be explained by his mutation adapting to the conditions he met after being born. 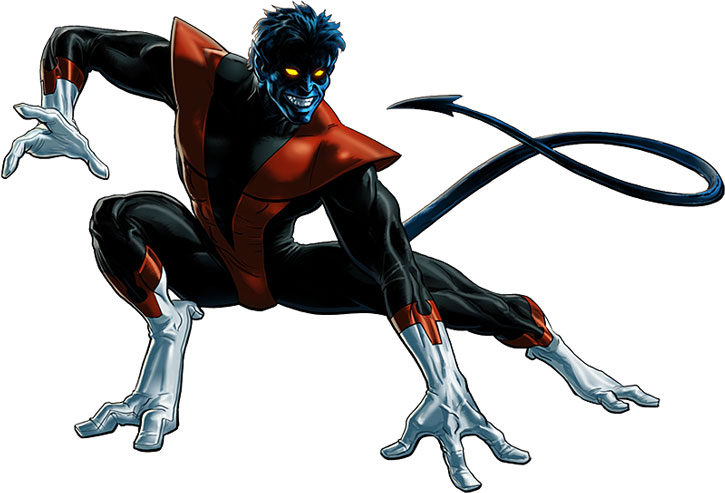 He was found by avowed witch and Romani queen Margali Szardos. She raised the boy with the body of a demon like she would have her own son. Kurt became part of the small, old school circus Margali lived with. Kurt became the circus’ star acrobat and aerialist, and grew close to Margali’s children, Stefan and Jermaine (the latter better known under the pseudonym Amanda Sefton).

Seeing him in shock over Stefan’s body, the villagers believed he had killed both Stefan and Stefan’s victims. They attempted to lynch him. Kurt was saved by Charles Xavier, and joined a new generation of X-Men. He was code-named Nightcrawler, and became a key member of the group. 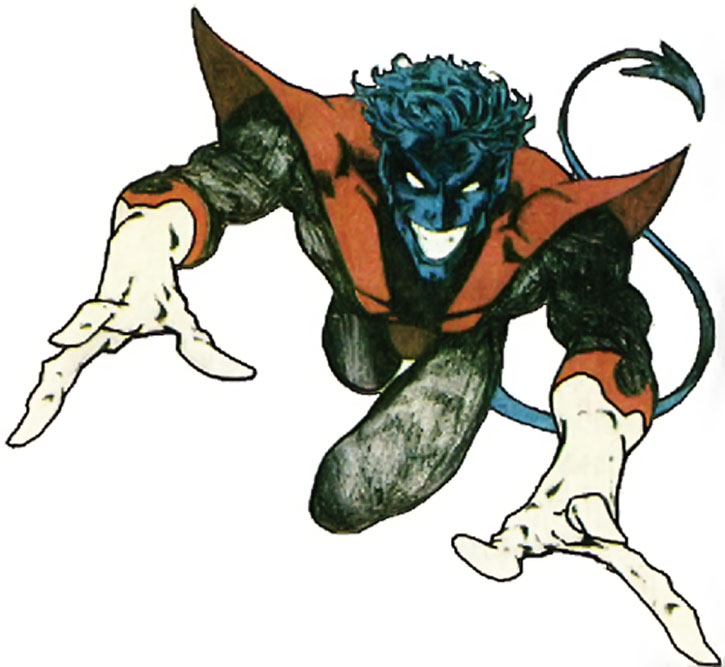 During one mean fight with the Marauders, Kurt was wounded and sent to Muir Island’s medical unit. He was still bed-ridden when he learned the X-Men had died in Dallas. Kurt went through a severe guilt trip, but was spurred into action when the Phoenix made it back to Earth, prompting the creation of Excalibur.

He’s been a member of the group since day one, and has become its leader.

Kurt has shining yellow eyes without pupils, dark indigo skin/hair and a pointed tail. He has 3 fingers on each hand and 2 toes of abnormal size on each foot, pointed ears and fang-like canines. 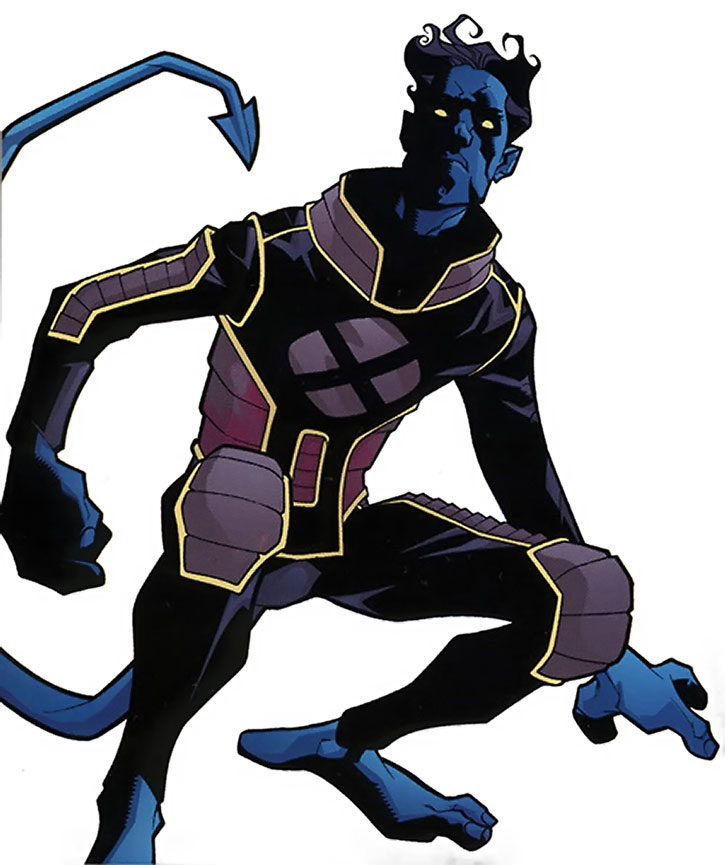 Kurt currently has a buzzcut and a goatee, both of which look good. He wears a red floating toga, and red and white fingerless gloves on his hands and feet. There is a sword with a big hand guard strapped to his back.

Since taking charge of Excalibur and getting close to Amanda again, Kurt has become noticeably more businesslike and ruthless. He’s tired of the anti-mutant prejudice, and sees Excalibur as a constant preemptive strike against hatred and bigotry. He’s a competent and aggressive officer, good a snap decisions and morale-strengthening remarks.

Kurt still has a private life, however. He’s still with Amanda Sefton (in fact, they’ve grown much closer than before), still loves the swashbuckling culture (especially Errol Flynn), and is still a practicing Catholic.

Simply, the later two aspects are less visible than during his career with the X-Men. He no longer acts like a comedian to cover his own uncertainties and sensibility, since he’s considerably tougher.

(Helping with a birth in the field) “I’m helping her to deliver. Trust me. I’m a priest.”

“All I am is a man trying to live his life the best he knows how and be true to what he was taught.”

“If I’d had a normal life, I’d quite cheerfully go mad and fall over right now. But as I’ve lead an utterly ridiculous life, I’d have to say that we’re apparently surrounded by alternate timeline versions of ourselves.”

“I want property damage from you, Pete, and lots of it. Make a mess, get them running around in a panic. Oh, and try not to get shot.”

In the DCU, Kurt’s mutant background would make little difference. His appearance, alone, would isolate him far more than his genetic background. However, his affinity for darkness, skin color, and ears are somewhat suggestive of partial Talokian heritage.

By contrast, his life in the circus is very likely to have brought him in contact with the likes of Dick “Nightwing” Grayson and Boston “Deadman” Brand.

After killing Stefan, Kurt was saved from the angry mob by Raven, who recruited him into the New Teen Titans. There he was reunited with childhood friend Grayson. As Nightcrawler, Kurt stays with the Titans for a time, but is injured in the final battle with Trigon, and retires, for a time, to recuperate.

Unfortunately, his wounds were not entirely physical, as his soul had suffered greatly. With few places to turn, Kurt was sent to England to seek out Jason Blood’s assistance. While he is away, Kurt is unable to participate in the Crisis, nor is he able to do any more than watch on television as the Titans disintegrate in its wake.

With no home to return to, Kurt fell in with a new team of Outsiders, led by brother of Kurt’s former teammate Terra, Brion “Geo-Force” Markov. It also included former teammate Raven and several unknowns. It was based in a British lighthouse, but travelled across much of Europe.

This new team was off to a shaky start against Apokoliptian Warhounds during the Legends incident. Shortly after that the robotic Widget dropping them into what appeared to be myriad alternate dimensions, but which is now known to be Hypertime.

The Outsiders managed to return to their “Home Hypertimeline,”. They were sent on a series of missions, though with encroachments of Hypertime occurring throughout the Lighthouse. On resolving this difficulty, the source became apparent: the team’s Raven was not native to our universe.

Worse, she was being chased by a boy known as Feron, who planned to claim Raven’s powers and her birthright as Trigon’s son. 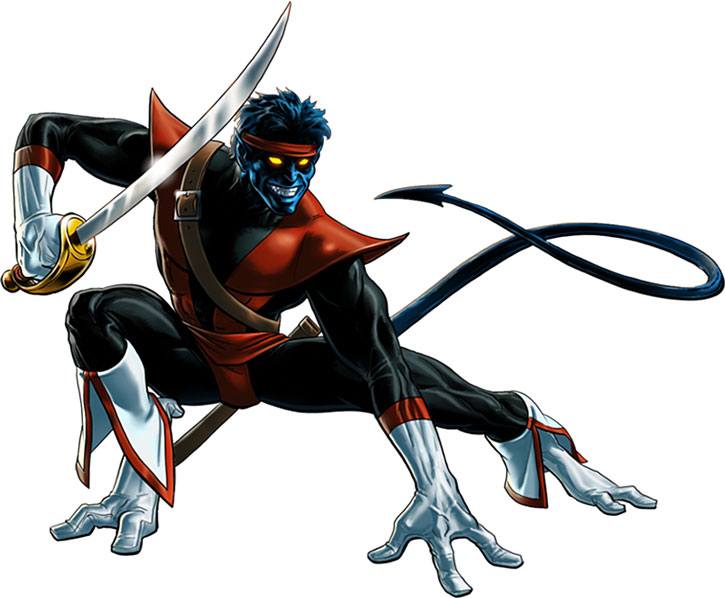 This alternate Raven would leave shortly after the team’s victory, but returned shortly thereafter. Her displacement in Hypertime rendered her sensitive to disruptions in the timestream, and was able to note the actions of Waverider.

Tracing him to his source, she found the world controlled by Monarch, and so transported the Outsiders to that future, to act as freedom fighters for a time, before returning them to their home time. The lighthouse destroyed, the team relocated to Brion’s homeland, Markovia.

Since that time, the Outsiders have disbanded (and reformed, and disbanded, and may yet reform again soon), and Kurt moved back to the United States, has served as a reserve member of the Justice League for some time, and is occasionally called upon by Oracle when Gotham City or Blüdhaven can use the extra assistance.

Bonuses and Limitations:
Medicine (Medical treatment) can be used to heal BODY but also SPI (+1).

Drawbacks:
Exile (voluntary, from both Germany and the carnie culture), MIH of aggressive bigots and sadists, MPR (extremely thick fingers), Strange Appearance, Partial Attack Vulnerability (sonics, -1CS RV), Mistrust (mutant – see below). Between the “death” of the X-Men in Dallas and their public return, he had Guilt.

Equipment:
During his Excalibur days, Nightcrawler had a Rapier [BODY 08, EV 04 (08 w/Martial artist)].

Nightcrawler has numerous limitations on his main Power – Teleportation. Those are :

This schtick is nearly unique to Nightcrawler. It involves grabbing a target and doing a quick succession of teleports in a single Phase, covering less than 3 APs of distance, in order to have the teleportation shock stun the opponent. The teleportation shock for all involved parties is raised by 5 APs.

Nightcrawler will usually “brace” for this by spending HPs on LDD against his own Power.

Wagner has a “True Faith” advantage most often found in other Genre, such as Gothic Horror Genres. This Advantage marks him as being touched by God, and possessing enough faith in the Lord to actually affect some of the works of the Adversary.

Value for that Advantage varies according to Genre – whether it’s useful very often or very rarely. In Nightcrawler’s case it is a 5pts Advantage, since it comes into play so rarely.

Kurt’s Mistrust only earns him 25 points (half-value), since he seems much less Mistrusted than most fellow mutants due to his cute inhuman looks and style. His whole British career was nearly free of the effects of Mistrust. Even in the USA the police was often not as aggressive as it would for his colleagues. Still, Kurt as experienced his share of mutant-hating and Sentinel assaults.

For much of his X-Men career, Kurt’s DEX was 06 and his STR 03, and he didn’t always had True Faith. DEX 07 and STR 04 were definitively witnessed during the period where he sported a buzzccut. 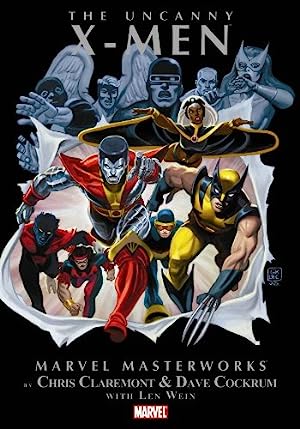 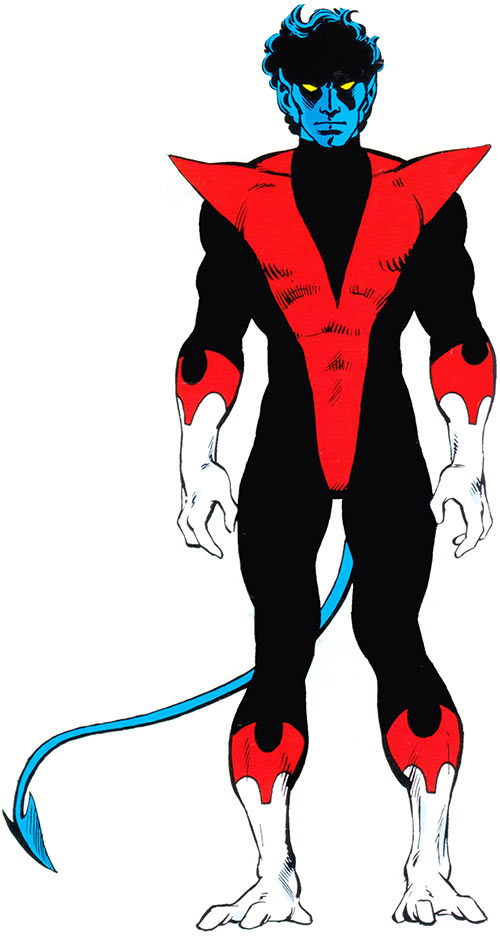 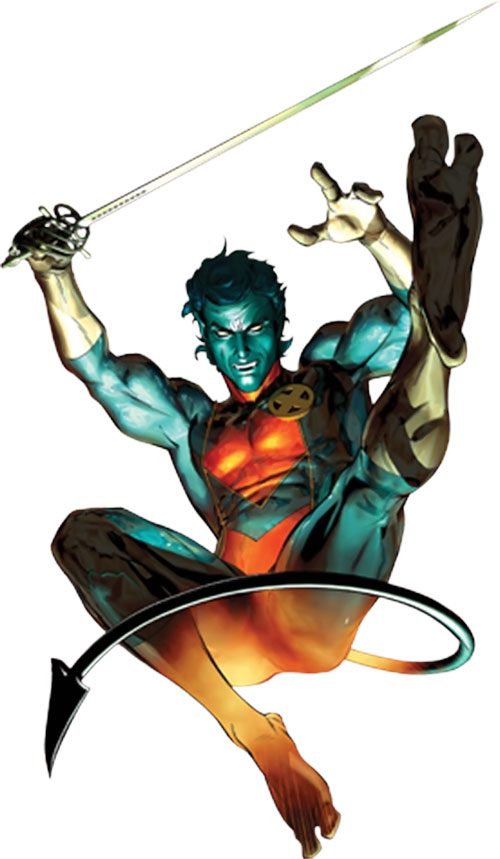 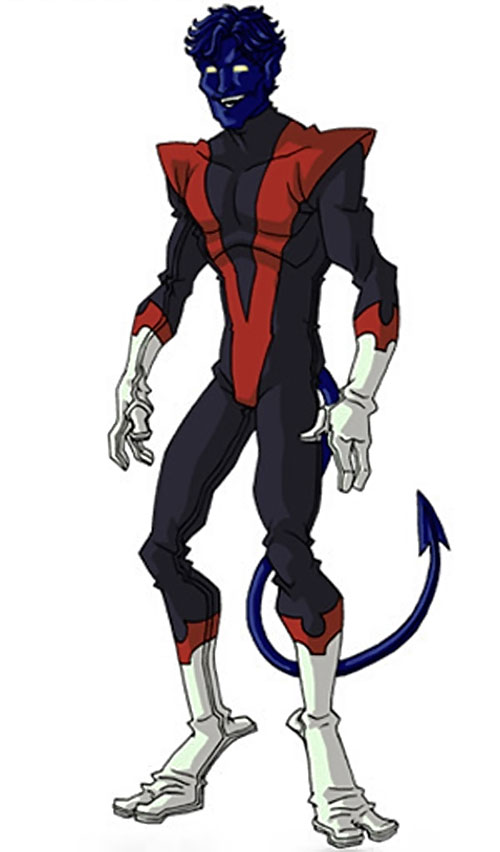 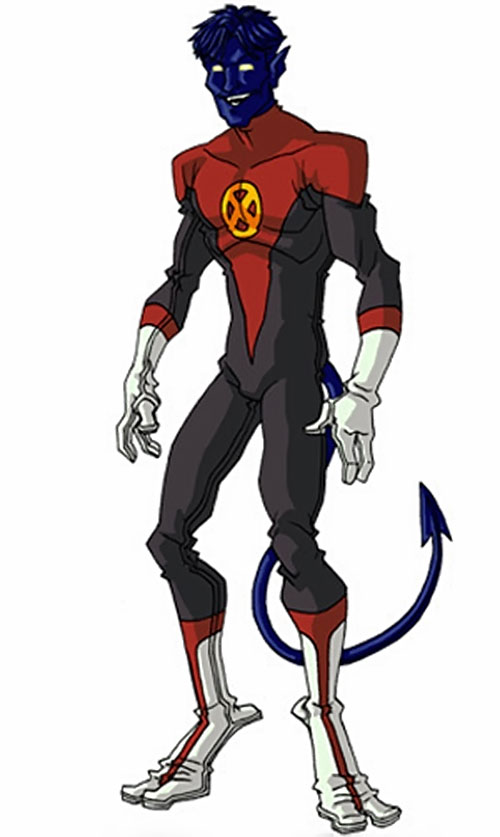 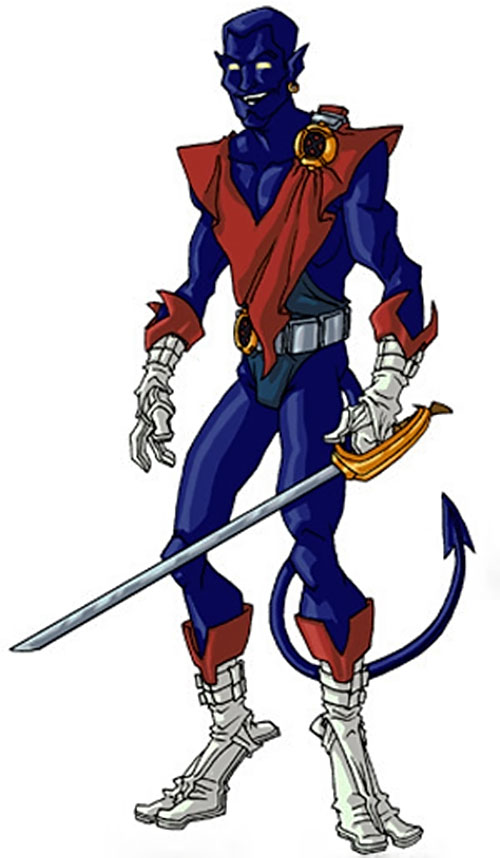 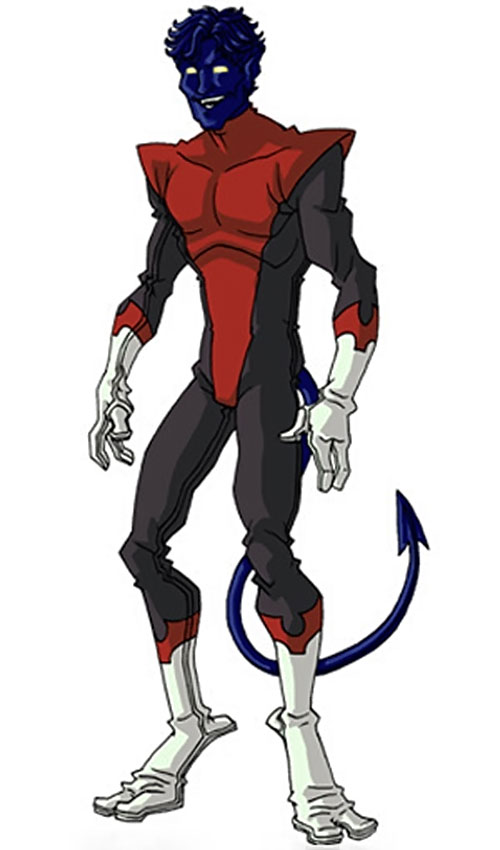 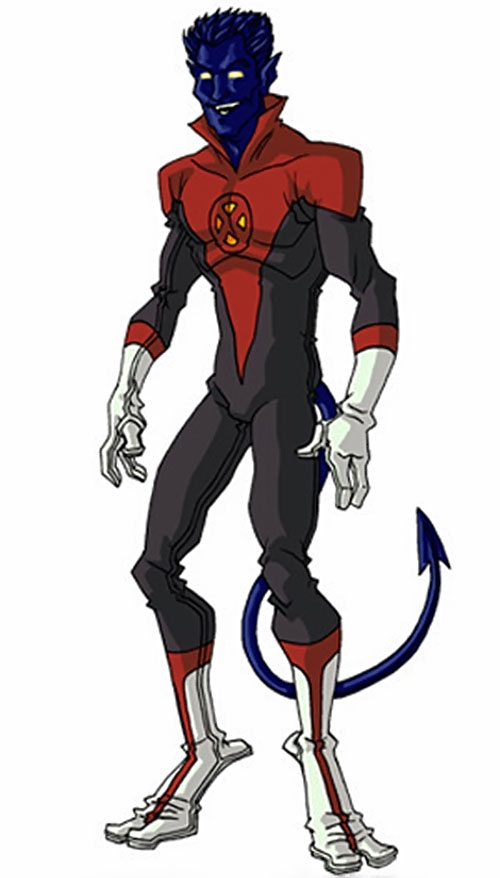 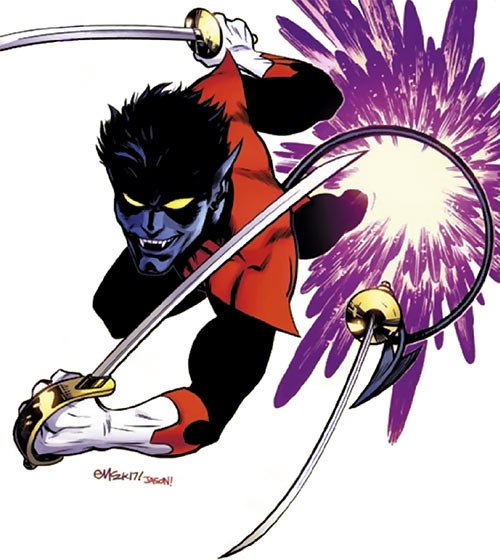 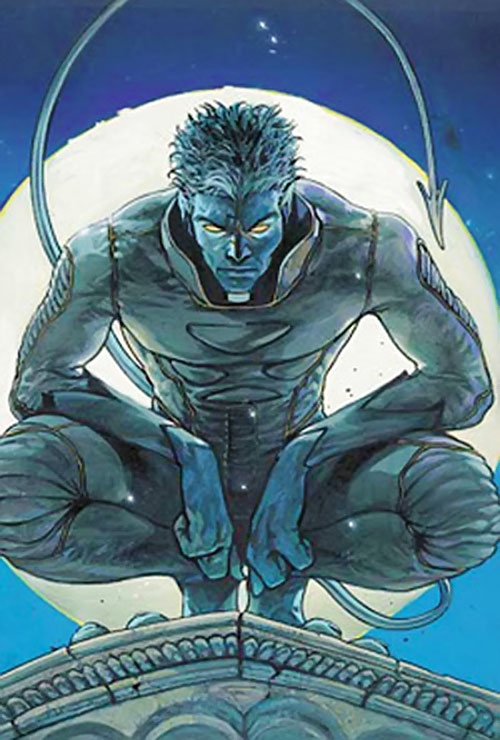 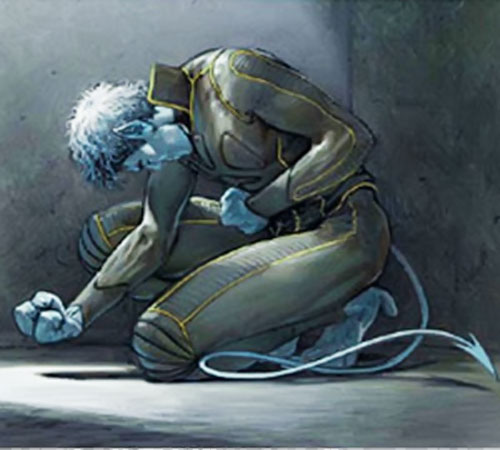 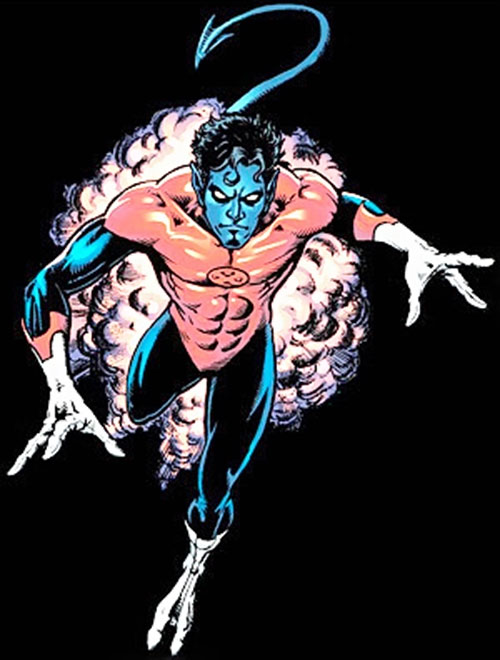 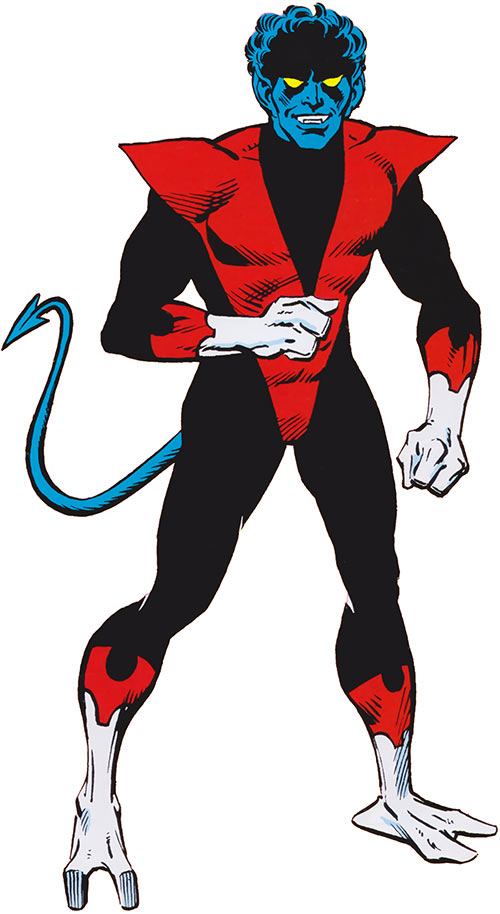 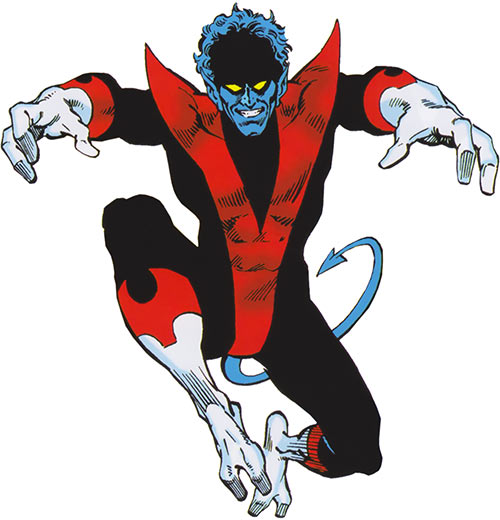 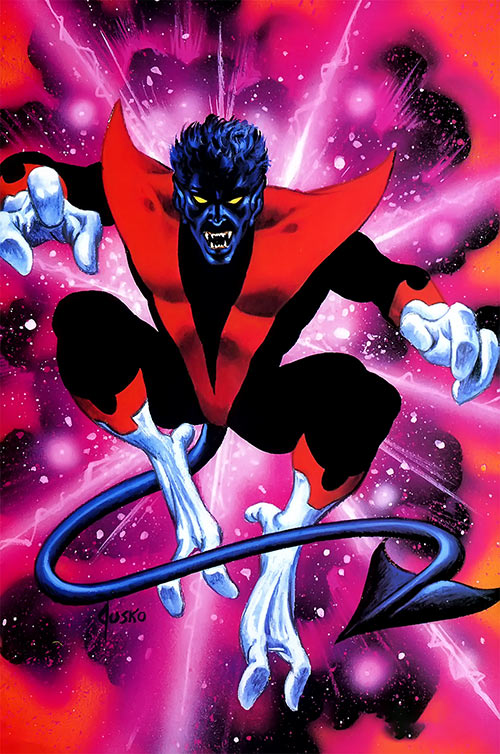