There have been a number of parodies or echoes of leading DC Comics characters in the Marvel Universe.

These usually are associated with the Squadron Supreme. Living in another reality (“Earth-S”), the Squadron has clear Superman, Batman, Wonder Woman, etc. equivalents.

The Squadron Supreme’s forerunner was the Squadron Sinister. These four characters debuted in a 1969 Avengers story. They were :

I shall become… a hawk

This article covers this version of Nighthawk. Specifically, it covers a short, liminalA transitional or initial stage of a process 1969-1974 span. Look, I almost never get to write “liminal” so give me that one.

After this span, Nighthawk is redefined into a more textured, more distinctive character than just “faux Batman”. So having a separate coverage of this earliest state is clearer. Especially since the character sheet is different.

And it’s also useful for people who want to imagine a version of Nighthawk that developed differently.

This means that this article doesn’t use *any* material from after Defender Vol. 1 #14. It’s *solely* the earliest takes on this character.

The Nighthawk seen in 1969 was the equivalent of a more serious, grimmer Batman.

It is therefore likely that he drew from the brief “New Look” Batman era of the mid-1960s. Which came just before the hugely successful Batman TV show ran with a much campier, funnier take on the concept.

As to the original Squadron Sinister storyline, it echoed the “Patriotic Crimes” tale of the 1940s Injustice Society. Roy Thomas  , who seems to have been the primary writer for those Avengers issues, is known for his work in bringing back such Golden AgeSuper-hero comics from the late 1930s to the early 1950s elements.

We also have some embarrassingly old notes about 1970s/1980s Nighthawk. They’re kept around because some people find them useful, but this here entry is a first step in replacing them with a real profile. 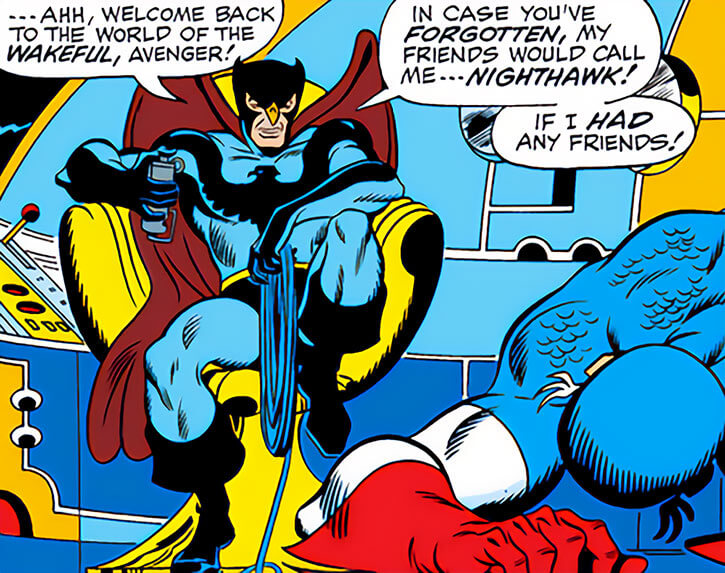 Kyle Richmond has been endowed by the Grandmaster with peak human athletic power. He :

The Grandmaster presented him as being “super-athletic”. This wording might imply superhuman levels, but in practice he seemed to operate on the tier just below Captain America (Steve Rogers)’s. Which, mind, is plenty !

I am the night ! I am not necessarily vengeance !

Nighthawk kept noting that these abilities were “night-spawned” and “night-born”. So even by his first real appearance, we could hypothesise that during the day his physical prowess was far less impressive.

We later learn that this was achieved via an alchemical compound permanently “doubling whatever physical power I had” but only “while the Moon was bright”.

Nighthawk leveraged this with a sports training program, including polo and gymnastics. Since any gain in strength, speed, etc. he achieved would be magically doubled during the night.

So, during the day, he likely still is an okay athlete.

Where does he get all those wonderful toys ?

The Grandmaster further issued Nighthawk with :

We further see Nighthawk using the following equipment, which doesn’t seem to come from the Grandmaster. 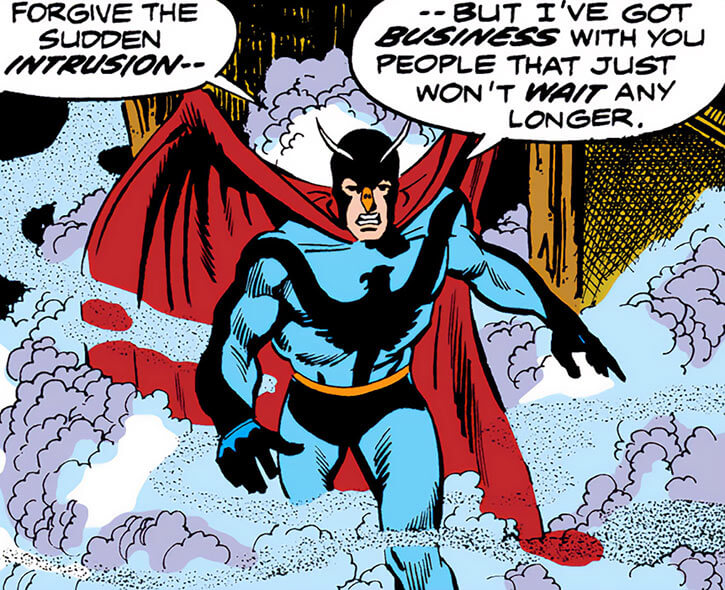 The Grandmaster challenged Kang the Conqueror to one of his cosmic games, with the fate of the Earth in the balance.

Kang’s champions would be his enemies, the Avengers. The Grandmaster created his champions on the spot, via his “far-off home […] a planet of living computers”. These altered and enhanced several Earth-616 men into the fighters whom the Grandmaster had envisioned.

We would later learn that the Grandmaster’s creations were based on Earth-S’s Squadron Supreme, who debuted about 15 issues later. And that unlike the other three, Hyperion was created from scratch, without altering an existing bloke.

A view to a Kyle

Mr. Richmond described himself as a “bored and boring tycoon”. He eagerly embraced his new identity as Nighthawk, caring little that he was fighting to destroy the Earth.

Nighthawk fought Captain America. He would win if Cap couldn’t prevent him from destroying the Statue of Liberty.

But he clearly underestimated the Star-Spangled Avenger, and was promptly taken down.

We soon learn that Richmond is some sort of wealthy chemist, living in an upstate New York mansion.

There are indications that he was burnt out and/or depressive. With his mansion having become musty, him drinking too much and doing very little, plus loneliness and poor self-image as an immature playboy.

Which likely meant that the wealth was inherited. Or, perhaps, the result of an early, fortuitous discovery.

However, he unexpectedly found a book of alchemy in his library, and became obsessed with a specific formula therein. He brewed the compound, which gave him his nocturnal Nighthawk abilities.

Richmond soon learned that this had been orchestrated by the Grandmaster. But by that point he already had been physically training for months, to become even stronger at night.

(Therefore, implicitly, when the Grandmaster created his Squadron Sinister, he had his “living computers” act in the past. So that Nighthawk and the others would already be ready for action in the present.)

From there, he was summoned by the Grandmaster to join the Squadron Sinister and fight Cap. 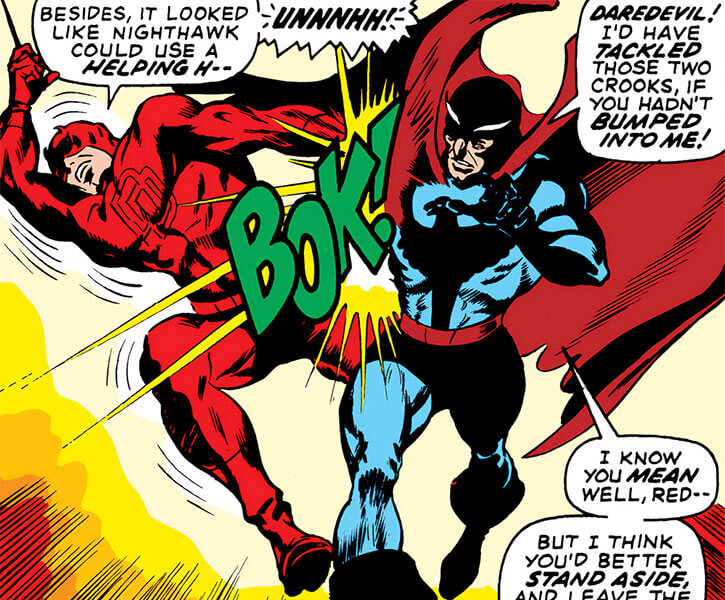 Nighthawk apparently fled before he could get arrested.

Though he had given Cap his name, the police seemingly left him alone. Richmond later mentions that he has a secret identity to protect, so it seems that Cap forgot to tell the authorities.

A few months later, Nighthawk hit New York City. His plan was to :

To the Devil with ye

The plan worked for a bit. In part because Daredevil sought not to act brashly. And in part because his popularity with New Yorkers had always been wobbly.

But Nighthawk was arrogantly sloppy. He only sought heroic optics and didn’t bother with the rest. Such as bringing the criminals he defeated to the police.

Once Daredevil got wise to him, he tricked Nighthawk into boasting about his plan whilst near a hidden microphone. His words were broadcast to the public, tanking his newfound popularity.

His confidence deflated, Nighthawk only narrowly escaped before dawn. 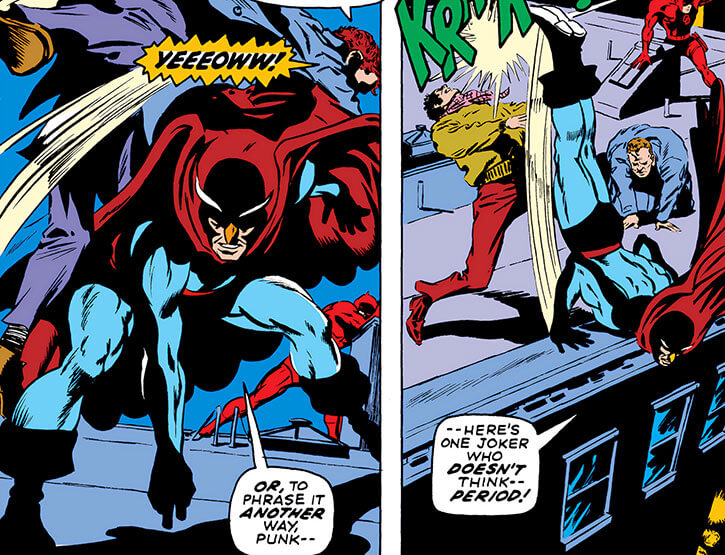 But in 1974, he received a letter threatening to expose him as Nighthawk. He thus had little choice but to attend the rendezvous in the message.

The Squadron Sinister was back, and wanted Nighthawk to rejoin. They were now working for the alien Nebulon. Nebulon wanted Earth, and the Squadron had agreed to melt the ice caps and flood the planet so he could make use of it.

Unlike with the 1969 plot, Richmond was horrified. He refused to help, but the Squadron and Nebulon prevented him from warning the Avengers.

However, Nighthawk heard the Avengers discussing the Defenders. He correctly assumed that the Squadron didn’t have preset measures to prevent him from contacting this low-profile non-team.

His gambit paid off. Though Nebulon and the Squadron eventually teleported him away, Nighthawk had just enough time to warn the Hulk (Dr. Bruce Banner), the Valkyrie (Brunnhilde) and Dr. Stephen Strange about Nebulon’s plans and allies.

Early on he was bombastic, arrogant and in love with his own voice. Nighthawk cared not one wit about the destruction of Earth, being confident that the Grandmaster would “provide for his champion”.

Daredevil called him a self-centred, lazy megalomaniac. Which seems about right. For instance, Nighthawk had convinced himself that only the Grandmaster could stop him. And that he had fought Cap “to a standstill”. And that Cap had only won because of his shield.

Nighthawk tries to sound masterful, but that comes across as boyish and hackneyed. This is less apparent for onlookers impressed by his physical prowess, but the lines themselves are corny clichés and stock would-be hip expressions.

This forced, vacuous, half-arsed character to Nighthawk’s 1970 bravado made his 1974 face turn easier to understand.

“Those who speak of me in the dead of night call me… NIGHTHAWK !”

“Like they say in the shoot-em-up’s, this town isn’t big enough for the both of us ! So why don’t you make like a banana — and split !” 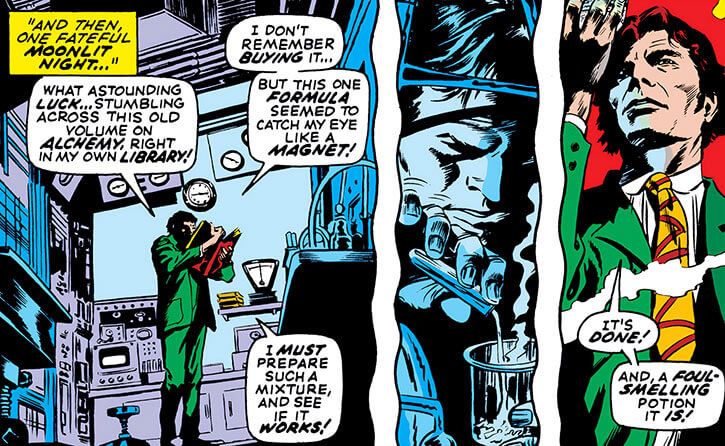 Power Loss (during the day, specifics unknown at this point).

My sense — which you trust because I am wise and charismatic — is that between 1969 and 1970, Nighthawk had his first change of character sheet.

Notably, it seems unlikely that the Grandmaster — who knows what he’s doing — would send against Captain America a guy who can’t even fight Daredevil.

Doing separate profiles for the 1969 appearance and the 1970s would be over-enthusiastic. But having two sets of stats in one writeup, and splitting the information between 1969 and later, remains simple enough.

Since I’m splitting, I can embrace the different vibes between appearances, rather than draw an average between them.

And heh, if you want to create a version of Nighthawk that use *solely* the 1969 material (before the Daredevil Vol. 1 #62 stuff, which makes it much harder to use Nighthawk as a credible Batman expy) well the writeup allows for that.

So you’ve got that going for you. Which is good.

Ain’t enough material to bench his non-RV Mentals and Mysticals. But going with the writeups.org “somewhat conservative values accounting for what’s actually demonstrated” approach is likely incorrect for a guy who’s clearly an equivalent of a Silver AgeSuper-hero comics from the late 1950s to the early 1970s DC character.

So I referenced the Second Edition DCH values for Hawkman, who feels like the intuitively correct power level. But minus one AP, and with markedly lower Hero Points given how his fight with Cap went.

Ditto for using blocky Skills rather than sticking to demonstrated Subskills. It goes for a Silver Age DC Universe statting vibe, based on old Mayfair material. 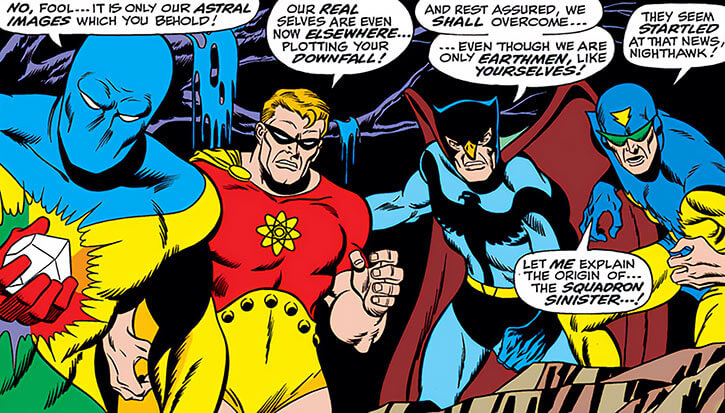 Power Loss (during the day, see below), Secret Identity.

With this character sheet we shift to a more conservative, based-on-what-was-observed statting style. The Skills are still blocky though, from lack of material.

This is because we can cleanly benchmark him against Daredevil and other well-established characters. Rather than “seems almost on par with Cap, but was abruptly and literally hoisted by his own petard” being all we’ve got to work with.

Plus, the narrative style switches from “cosmic duels !” to “this guy is fast and agile but kinda pathetic”.

Perhaps the Grandmaster had supercharged the alchemical formula with a bit of power cosmic. And perhaps that charge eventually ran out as he turned his attention elsewhere.

We don’t see Kyle Richmond active during the day during that span, so there’s nothing to benchmark him with.

Having all Skills and Attributes collapse to 03, with maybe a few 04s (in DEX, Acrobatics, Martial Artist) seems about right.

The dizziness drug he injected into DD was weird :