Nighthawk uses a combination of high-tech weaponry, intellect, skills, stealth, fighting prowess, brutality and fear to overcome his foes. He employs his great wealth for various projects to help out the black community in his civilian identity.

Nighthawk is an athletic male clad in a dark costume with an intimidating hawk motif. He is extremely well-trained, fast and confident in his body language.

As Kyle Richmond he is a fit, bald, black male with a strong, confident personality and a fine suit.

The senseless murder of Kyle Richmond’s parents was a traumatic event that left him scarred for life, and eventually turned him into a hero more feared than the criminals he polices.

Kyle is an African American entrepreneur that employs his wealth to train, and develop advanced weaponry and devices to aid in his campaign on crime as a vigilante. He apparently follows militant principles of Malcolm X and regularly quotes him. He is actually a racist, a racist against all non-blacks, and then in particular against the whites, and will thus only combat crime that targets blacks.

Nighthawk is brutal in his crime fighting and has little compunction in killing those he believes aren’t worth the bother of due process. His force of personality is easily strong enough to regularly engage with superhuman beings as an equal.

Although he sometimes works with the Squadron Supreme, he tries to limit their interaction to a minimum, preferring the ruthless solo vigilante route. He perceives Hyperion as ignorant and naive as to racial bias, and fellow African-American hero, the Blur, is seen as a sell-out or an “Uncle Tom”.

The rest of the Squadron is just wasting their talents on nonsense missions that serve to keep the status quo. Thus, his hardliner agenda has left him with very few friends in the heroic community. Nevertheless, justice has to be served!

“I don’t do inter-dimensional exploration because we didn’t know there were other dimensions to explore until four seconds ago.”

“A long time ago, my dad heard Malcolm X speak at a church in Memphis. He said that during the slave days, you had the House Negro, and the Field Negro. The House Negro lived in the master’s house, ate the same food as the master, lived in a warm room, usually in the basement. If the master got a cold, he was right there to help out, all cheerful and friendly because he wanted his own life to be good and that meant making the master happy. The Field Negro ate whatever scraps the dogs didn’t eat, lived out in a cold shack was beaten and kicked—And when the master got sick, he prayed every day the master would die. Didn’t matter if the master was technically a nice guy or not. The master represented the system, and it was the system he hated. Our backgrounds may not line up, but as much as I like Stan, he’s a house Negro. And I’m a field Negro. And that’s never going to—[realizes Stanley has heard the conversation] change…”

Redstone: “Who sent you ? What else came with you ? I just broke two of your ribs. Three. Four. Answer my question. Or I take eyes next.”
Nighthawk: “…go fuck yourself… hear that…? … that’s a sonic boom… company’s coming…”

Nighthawk: “What mattered was bringing him to justice, in a court of law, where the families of the people he killed could get some fucking closure.”
Hyperion: “We never could have brought him in alive ! The only way to bring him into a courtroom is if we dragged in his body and propped it up on the judge’s desk !”
Nighthawk:”… You know what ? I got no problem with that. No problem at all.”

Notes:
Nighthawk has the Gadgetry skill as it is assumed that he actually designs and builds his own inventions, instead of employing a secret cabal of scientists and engineers, although this has not been shown. The name of his company may be Richmond Industries. 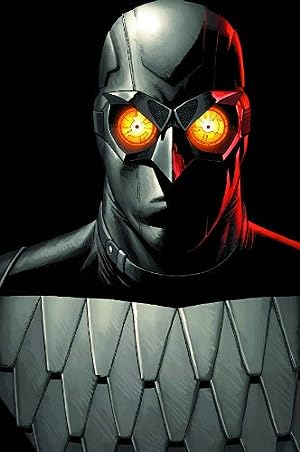 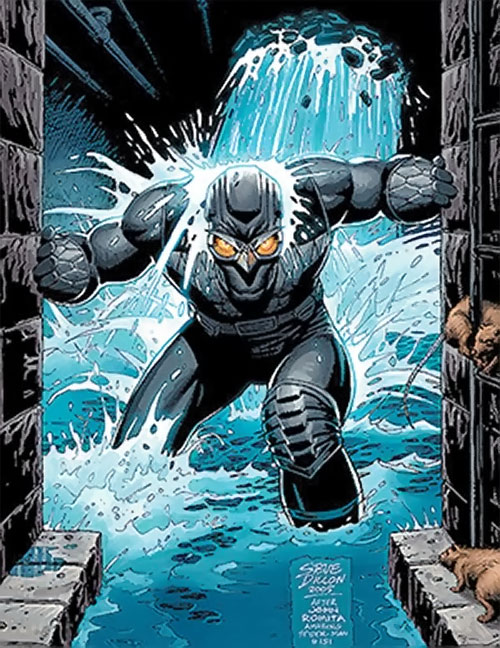 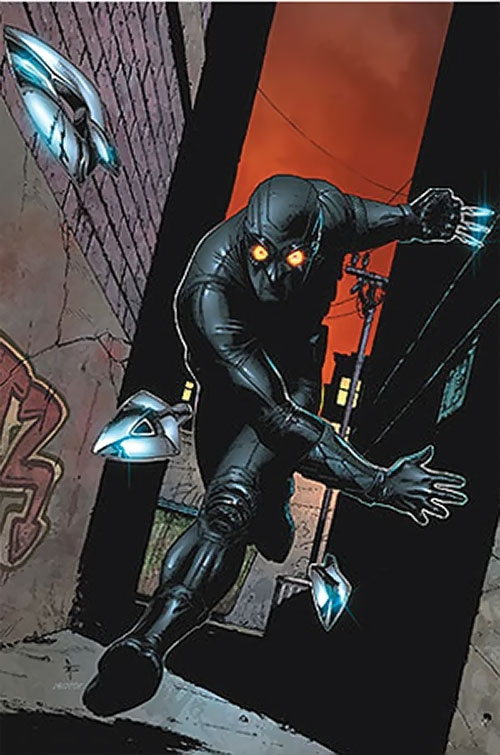