Nightwind can generate and manipulate wind. This allows her, among other feats, to hurl opponents around with whirlwinds and to fly.

She supposedly can also discern thermal patterns, which facilitates her manipulation of air masses.

She’s familiar with basic air-and-space vehicles common on 30th century Earth. As a long time Legion Academy student, she’s presumed to have taken Legion combat courses. By the time she becomes an instructor at the UP Militia Academy, she’s advanced her martial and military skills considerably.

Berta Skye Haris was born on Earth in the late 30th century. She grew up longing for membership in the legendary Legion of Super-Heroes.

Berta’s powers are the result of a genetic anomaly found in certain female descendants of her bloodline. These anomalies endow them with the ability to generate and manipulate wind currents.

While possibly tied to the hormone cycle, the exact genetic cause of this power has not been established. Nor has the exact method of genetic transfer. According to Berta, she was “given” her power by her grandmother when she was very young.

There are rumors that Berta is actually from a small tribe on another planet where everyone has the power to control winds, but the truth is unclear.

In October 2983, she tried out for the Legion as Nightwind. She was rejected in favor of Blok. Her powers were considered worthwhile, but her cockiness and inexperience came through clearly during her try-out.

She assumed that an attack by the Starburst Bandits was simply a staged test. As a result, she did not treat the threat seriously and was knocked out without ever being a factor in the battle. Indeed, she was lucky to escape serious injury.

Upon the suggestion of Wildfire, whom she greatly admired, she enrolled in the Legion Academy, along with her fellow rejectees Lamprey and Crystal Kid. Although she desired the honor and recognition of Legion membership, she was very happy at the Academy. She made good friends (Lamprey became her roommate), studied, and had opportunities to meet many of the Legionnaires.

She treasured most her friendship with Wildfire, which she and Lamprey have kept up, becoming confidantes of sorts for him. This occasionally caused argument with other students like Comet Queen and Laurel Kent, who did not like his abrasive personality.

Some time after beginning her studies at the Legion Academy, Nightwind made a conscious effort to appear more mature and deserving of Legion membership. She cultivated a somber, pensive manner and new, conservative costume. She hoped to impress the Legionnaires with her seriousness.

In the alternate timeline created by Glorith of Baalduur, Berta finally achieved Legion membership. Unfortunately, this occurred during the most tumultuous time in the Legion’s history. Nightwind was inducted on March 17, 2990, several months after the Magic Wars caused the economy of Earth and the United Planets to collapse.

The Collapse sparked a new Khund invasion, and the resignation of several key Legionnaires. It also cleared the way for infiltration of Earthgov by the Dominion, planting the seeds of long-term strain between Earth and the LSH.

One effect of this strain was the closure of the Legion Academy on June 7 2990. That made Nightwind the Academy’s last official graduate. Berta served a solid, if undistinguished, tour of duty until the Legion was forced to disband in July 2992.

When the Legion disbanded, she was contacted by her former Academy teachers, Luornu Durgo (formerly Duo Damsel) and Chuck Taine (formerly Bouncing Boy). Berta was offered a teaching position at the United Planets Militia Academy on Xolnar, chartered with training infantry (many of them possessed of superpowers) to fight off the Khund invasion.

She accepted, along with her roommate Lamprey and their classmate Jed Rikane (formerly Power Boy). Berta soon became the toughest and most successful trainer there.

Unfortunately, on March 14 2995, Berta and an entire squad she was leading on a reconnaissance mission were ambushed. They were slaughtered by Khund invaders. The Legion and the UP Military eventually beat back the Khunds, and Berta was buried with full military honors on Xolnar.

Her exact heritage – human, alien, or otherwise – is unclear. Her appearance is certainly not Terran-standard, though it is not odd by 30th century standards. She has bright yellow skin, eyes that are solid white (no visible cornea or pupil), and hair of a light gray or grayish-white. 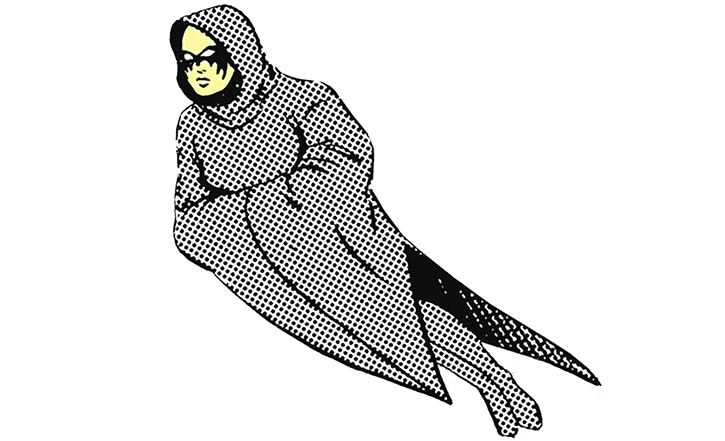 When Nightwind first tried out for the Legion, she wore a standard – and ugly – dark magenta bathing-suit type super-heroine costume. It came complete with knee-high boots and a cape of the same color. The cape had scalloped edges like Batman’s. She has a belt and bracelets of some gray gemstones, and a big “N” on her belt, for Nightwind.

Later she adopted a more sober appearance. She wore a gray cloak with hood that covered her hair and gray bodysuit including full-length gloves and boots. She also acquired black designs on her face – somewhat similar to the designs Dazzler used to put on her face when performing at a disco.

In Nightwind’s case, the designs may have been makeup or tattoos. My theory is they’re natural, and Nightwind was covering them with makeup during her first Legion try-outs.

As a part of the UP Militia Academy, Nightwind wore a military uniform and had her head shaved completely bald.

In her first few appearances, Nightwind is flighty and quite flirtatious. She was excited just to be around the Legionnaires, and perhaps hoping to influence the (mostly male) Legionnaires to let her on the team.

It’s hard to get a read on her personality after that. She later adopts a somber and serious manner, but there are strong indications that this is a façade. It was likewise intended only to impress the Legion and improve her chances to join the team.

To her credit, she was genuinely touched by Wildfire’s origin story and the tremendous sacrifices demanded by his life, and the hardships he faced before attaining LSH membership. This inspired her to work and persevere until she also achieved membership. Unlike many rejected Legion applicants, she never demonstrated any resentment, and never gave up on her dream.

This paid off for her in the “Five Year Gap” timeline. This period is almost entirely unchronicled, and there are few hints as to what her stint with the Legion was like or how it changed her.

The brief glimpse we got of her life on Xolnar at the UP Militia Academy showed a woman who, at least outwardly, was commanding and self-assured. She was still dedicated to serving the common good. One is tempted to wonder if Nightwind had truly found herself, or was still trying to project the image she thought she ought to.

“How did you break those pistons, big boy ?”

“This is probably just some kind of test, right ?”

Lamprey: “This is the best part of being at the Academy, Nightwind. Maybe we’re not Legionnaires – yet – but we do get to watch them so closely.”
Nightwind: “Only on monitors, Lamprey. And after the way Wildfire has treated us, I’d far rather be close to him personally.”

No particular inspiration. I have vague memories that Nightwind may have showed up in post-Zero Hour continuity as a Legion cadet. I will say that I think Nightwind had a lot of potential as a Legionnaire, for two reasons.

First is that she would have been one of those rare Legion women with significant physical power, which would likely have given her some prominent exposure. A second, better reason is her (perhaps imagined by me) identity issues. She could have been good fodder for self-examination and self-doubt stories.

I could see “weaker” characters like Phantom Girl or Shrinking Violet holding the more powerful but less secure Nightwind in quite a lot of contempt.

In the Five Year Gap timeline, it would have been interesting to see how Black Dawn (and Wildfire’s rumored death) affected her. And whether she resented not being tapped to rejoin the reforming LSH.

For this reason, in my own timelines I tend to have her roommate Lamprey (also an instructor on Xolnar, with useless Aquaman type powers and even less on-panel exposure) die in the Khund attack and have Nightwind survive. Callous, aren’t I ?

Equipment:
LSH Flight Ring (see the Legion Equipment writeup for details – Nightwind only has this during her time as a student at the Legion Academy).

Nightwind has advanced her stats in several areas by the time of the Five Year Gap timeline.

Nightwind has very few appearances, and most of those are only for a few panels, so I’ve made some extrapolations in her Skills. 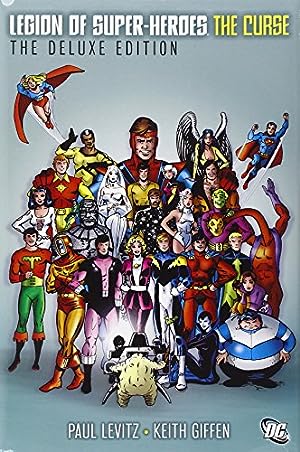 The Legion of Super-Heroes – The Curse 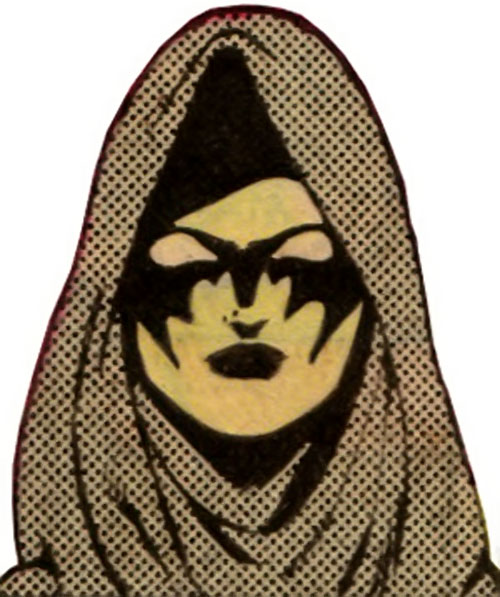 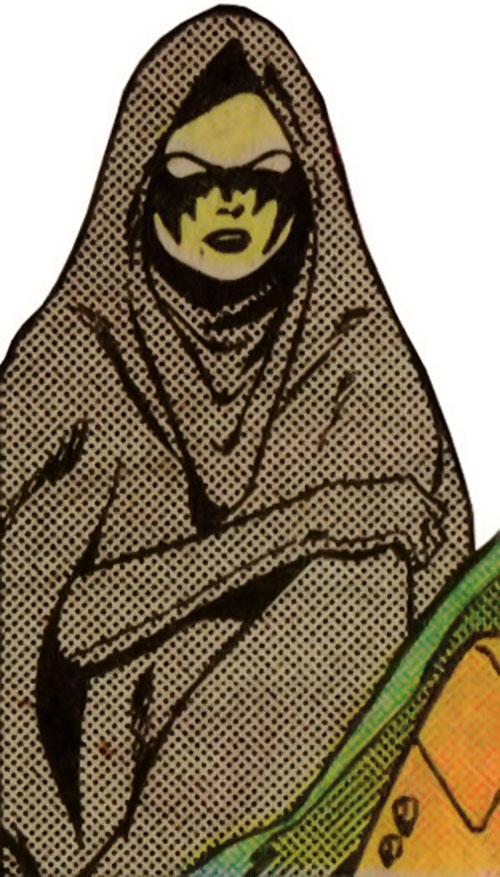 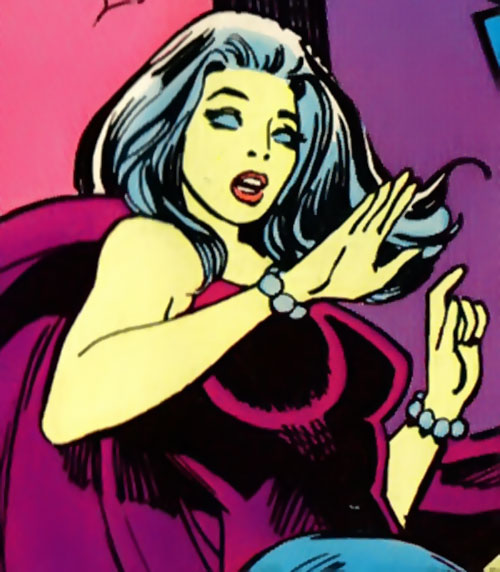 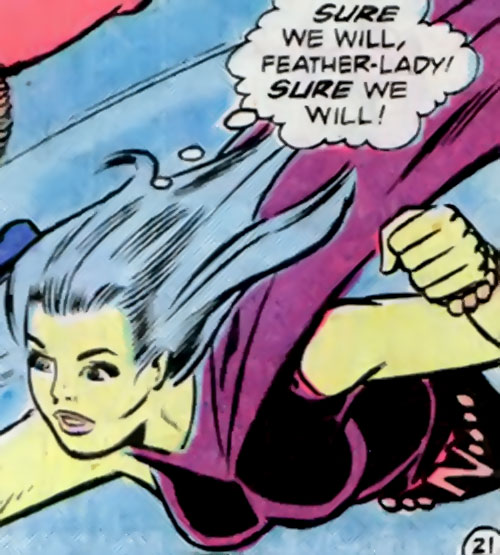 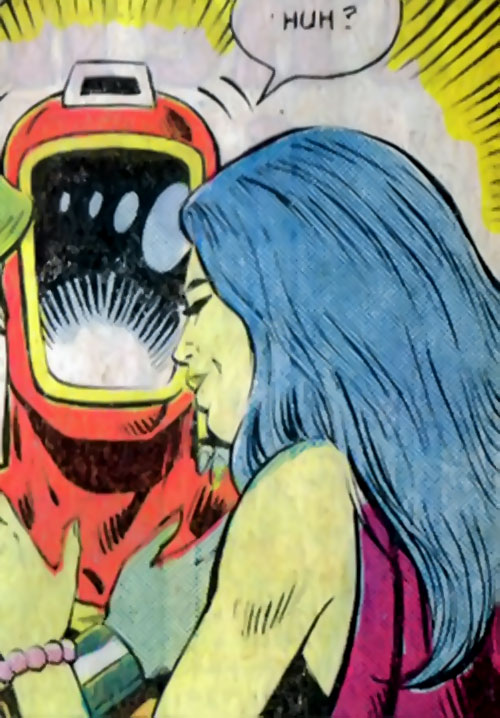 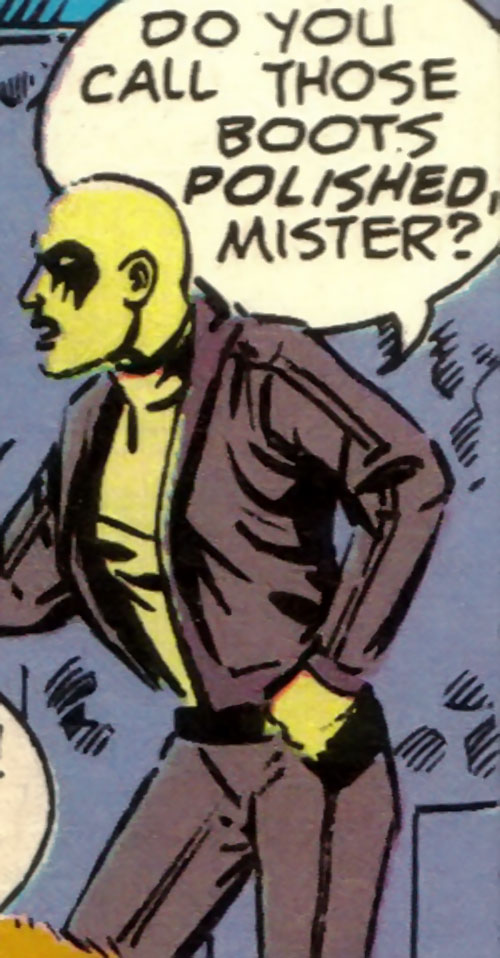 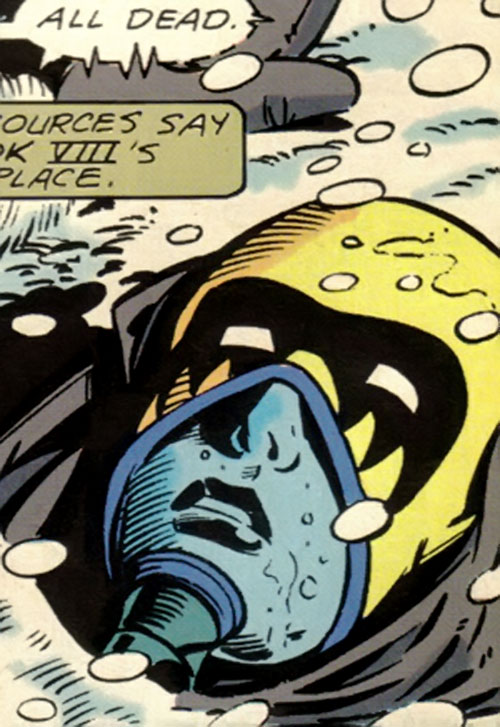