This profile is largely a placeholder (using a Marvel text). It is meant to host the shared background between the pair, so information doesn’t get pointlessly repeated between the two profiles. It was just there for years but lo, there is hope ! The gals now have the first chapter of their revised profile – links above.

This profile will thus get replaced by chapter 2 once that rolls around.

Nightwing Restorations is a PI outfit, mostly made up of Misty Knight and Colleen Wing, whose names were merged to create Nightwing (so, no relation). It’s been operating for more than ten years, and specializes in missing persons.

The two women, nicknamed the “Daughters of the Dragon” (which they do not appreciate much) mostly work in New York and the East Coast.

They are made even more remarkable by their connections. Their friends include many martial artists (such as Iron Fist or the Sons of the Tiger), mutants (they know the X-Men pretty well), superhumans, cyborgs (Misty Knight is very active in the cybered community) and such. Some of those will occasionally participate in their cases.

The first picture has the early 1980s looks for Misty and Colleen. The second has the mid-2000s looks.

Colleen Wing grew up in the mountains of northern Honshu in Japan. Hhe was raised by her maternal grandfather, Kenji Ozawa, the head of Japan’s Secret Service. Colleen was trained in the warrior arts of her samurai ancestors after her mother died.

Wing eventually moved to New York City, where her father taught Asian History at Columbia University. Soon caught in the midst of a gun battle on Manhattan’s Upper West Side, Colleen was saved by Mercedes “Misty” Knight. Knight was a member of the NYPD’s 11th Precinct bomb Squad, and quickly became Wing’s best friend.

Later, responding to a terrorist attack on a bank, Knight lost her right arm when the bomb she was retrieving exploded. Outfitted with a hi-tech cybernetic arm, Knight was depressed at the prospect of a desk job and resigned from the force. However, Wing encouraged her to become her partner in a detective agency.

Collectively known as the Daughters of the Dragon due to their martial arts prowess, Knight and Wing formed Nightwing Restorations. It was a private investigation firm located above the Golden Dragon Restaurant in New York’s Chinatown.

Colleen Wing was kidnapped by enemies of the Iron Fist (Daniel Rand-K’ai). Her father had foretold the Fist’s coming, and Knight eventually Rand. They banded together to rescue Colleen, and Misty and Danny became romantically involved.

When an agent of crimelord Emil Vachon assassinated Ozawa, Knight and Wing traveled to Hong Kong to investigate. Howbeit, they were captured and taken to Vachon’s volcano fortress in the South China Sea. Vachon attempted to drug the duo and force them into service as his concubines. But they resisted his control, and Wing ultimately slew Vachon in a swordfight.

Later, Davos the Steel Serpent, the son of Iron Fist’s mentor, stole Iron Fist’s powers. The Daughters teamed-up with Spider-Man to confront the villain, who was finally defeated as a result of his inability to control Iron Fist’s stolen powers.

Alter Iron Fist formed the work-for-hire partnership known as Heroes for Hire with Luke Cage, the Daughters frequently aided the mercenary heroes on their missions.

The earthquake-generating arms dealer Moses Magnum then threatened to sink Japan if the nation did not declare him its absolute ruler. The Daughters helped the X-Men and Sunfire (Shiro Yoshida) defeat him.

In 1981, Knight was visited in her office by Angie Freeman, a close childhood friend of Knight who had become a reporter and novelist. But Angie’s brother Tom had befriended a vampire who agreed to purge New York’s Upper West Side of criminal activity. The monster’s condition was that one local would join him as a fellow vampire every 5 years.

Angie was the first to be sacrificed as a vampire. Although the original vampire died in a fire, the agreement was still in force and Angie sought to transform Knight into a vampire. Fortunately, Wing tracked down Knight to the catacombs beneath Freeman’s townhouse and helped her resist Freeman’s control.

As Knight pierced Freeman’s heart with a wooden slake, Wing beheaded her with her katana, effectively ending Freeman’s existence.

Knight’s relationship with the violent King caused a major rift in her friendship with Wing. Aided by Dr. Druid, Colleen travelled to K’un-Lun with Iron Fist and Cage to find a cure for the radiation poisoning plaguing Iron Fist. Meanwhile Knight remained by King’s side.

When K’un-Lun’s evil Black Dragon (Chiantang) followed the trio back to New York, the mystical beast was shot by King and beheaded by Wing. They then cremated Black Dragon’s head and stored the ashes in Nightwing Restoration’s office.

Master Khan, still posing as King, then arranged for the alien Super-Skrull (disguised as super-powered child “Bobby Wright”) to kill Iron Fist and frame Cage for his death. But unknown to all, the real Iron Fist had already been captured by the extradimensional  H’ylthri race. The being killed by the Super-Skrull was merely a duplicate.

The Super-Skrull then impersonated Iron Fist. He briefly joined forces with Knight in the jungles in the Savage Land, but his true identity and Master Khan’s convoluted scheme were soon exposed. Reunited, the Daughters traveled with Namor the Sub-Mariner to the dimension of K’un-Lun, where they rescued the real Iron Fist from his H’ylthri captors.

With business slow, Knight began working as a paralegal for the law firm of Nelson, Murdock & Sharpe. Meanwhile Wing offered Cage work as an operative for Nightwing Restorations, but Cage declined. Knight then teamed with Spider-Man, Cage, and Iron Fist to defeat the Scorpion, who had kidnapped J. Jonah Jameson.

After the battle, a distraught and disillusioned Iron Fist disappeared on a world-spanning quest to find meaning for himself. The Daughters followed him to the Himalayas, saving him from a wolf pack. Along with his mentor, Lei Kung the Thunderer, the Daughters accompanied Iron Fist to K’un-Lun. There he defeated a resurrected Steel Serpent and regained direction in his life.

I go checking out the reports, digging up the dirt

The Daughters were soon hired to help the team apprehend biotechnician/geneticist Professor Wolfgang Hessler. He was a creator of powerful bio-weapons, who worked in St. Eboar’s Monastery in Symkaria. Unwittingly manipulated by the Master, the Daughters and their allies soon battled Silver Sable’s Wild Pack, which was protecting Hessler.

Although the Master ultimately obtained Hessler’s technology, the Heroes for Hire defeated him, but at a great cost to Iron Fist. Soon alter, the Daughters participated in a mystic ceremony conducted by Brother Voodoo to replenish Iron Fist’s life force.

Alongside Iron Fist and Cage, the Daughters were next hired by CEO Getulio Villa-Labos. The job was to protect DaCosta International’s San Francisco office from Reignfire, whom Villa-Labos believed to be Roberto DaCosta (aka Sunspot).

Knight was later attacked by the New Men’s White Tiger, Iron Fist’s Heroes for Hire teammate. The Tiger was jealous of Knight’s relationship with Iron Fist, but Knight convinced the uplift  that she could not win Iron Fist’s love by eliminating the competition.

You get to meet all sorts in this line of work

Next, Wing accompanied Heroes for Hire to Madripoor to investigate allegations of piracy in the South China Seas. She helped defeat Lionmane, the Chinese general secretly in charge of the piracy operation, and his associates —the Cat and Sai.

Later, the biochemist Nightshade broke into Nightwing Restorations. She defeated Wing and obtained the cremated remains of Black Dragon’s head, which she used to resurrect the monster.

In 2004, Cage was critically injured during Nick Fury’s “Secret War”. Knight and Wing provided protection alongside Iron Fist while Cage recuperated at the Night Medical Center, a treatment facility for street-level superheroes.

Helper(s): The History section in this version is from Marvel and will have to be replaced. 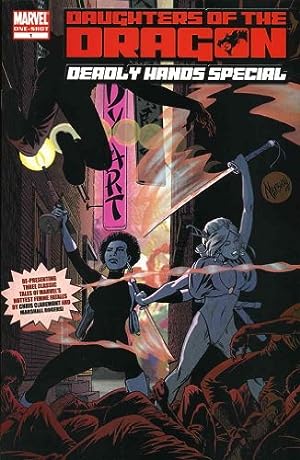