Originally possessing no observed powers or skills, Nikita discovered she had the ability to call upon a powerful dragon guardian when in danger. The dragon is a huge (at least 150‘) specimen, which can fly, breathe fire, and is dedicated to protecting Nikita.

She shares a mental link with Rascal, which allows each of them to sense the other’s whereabouts. This is actually an ability of her people to form a permanent bond with a life mate, which Nikita unknowingly formed with Rascal. This link may also have the effect that should one of them die, the other does too, as seems to be the case with Nikita’s parents.

Born in another dimension , in which she was a princess, the young Nikita was witness to the genocide committed by Monster X. It left her with constant nightmares. When her parents fled with her to Earth, her father had her memories suppressed. This left her with only a strange reaction to seeing red X’s, similar to the scar on Monster X’s head.

Unaware of her alien origin, Nikita tried to live a normal life. That was despite he father’s vast wealth and dubious international repute as a technologist.

She attended college in the US, which was where she first met Rascal. The instant attraction between them quickly deepened, with an unnatural mental bond forming between them. They would later learn was due to Nikita’s heritage.

This relationship was frowned upon by Nikita’s father, exacerbating the gulf between her and her parents. This led her to want nothing more to do with them. The pair gathered a group of super-powered misfits around them, which they called Strikeback. It was formed more as a mutual defence pact than a proper team.

While Rascal and Nikita were celebrating her 25th birthday on the rooftops, they were attacked by mercenaries hired by Nikita’s parents. The mercenary Doberman managed to get away with Nikita while his flunky Rottweiler kept Rascal busy. Nikita was taken to a local warehouse used as a staging ground by the mercenaries, where her mother was waiting.

The warehouse was thrown into chaos when Rascal led the other members of Strikeback (Purity, Sherman, Short Fuse and Jade Cobra) and Midnight Devil there. A few of the mercenaries, learning how much Doberman had been offered to take her to Dragonryder Island, decided to take her there themselves to collect the reward.

They got her on board one of the vehicles, but Jade Cobra and Midnight Devil had also managed to sneak on board. Misinterpreting Midnight Devil’s quip to mean that he could fly the vehicle, Jade Cobra proceeded to kill the mercenaries, only to learn they no longer had a pilot. The plane came down near the Grand Canyon. Doberman and some of his more loyal mercenaries soon caught up.

They did their best to flee, but it ended up with Nikita and Jade falling into the Canyon. They were saved when an enormous golden dragon caught them. The dragon stirred faint memories in Nikita. After she asked it to set her and Jade down, it did, soon disappearing. They were soon overwhelmed by Doberman’s forces, and taken to Dragonryder Island.

When she woke and confronted her father over the kidnapping, he revealed that he and his wife would soon die. He also told Nikita the truth about her origins, offering to have the memory block removed. She agreed, and was sedated while the procedure took place. 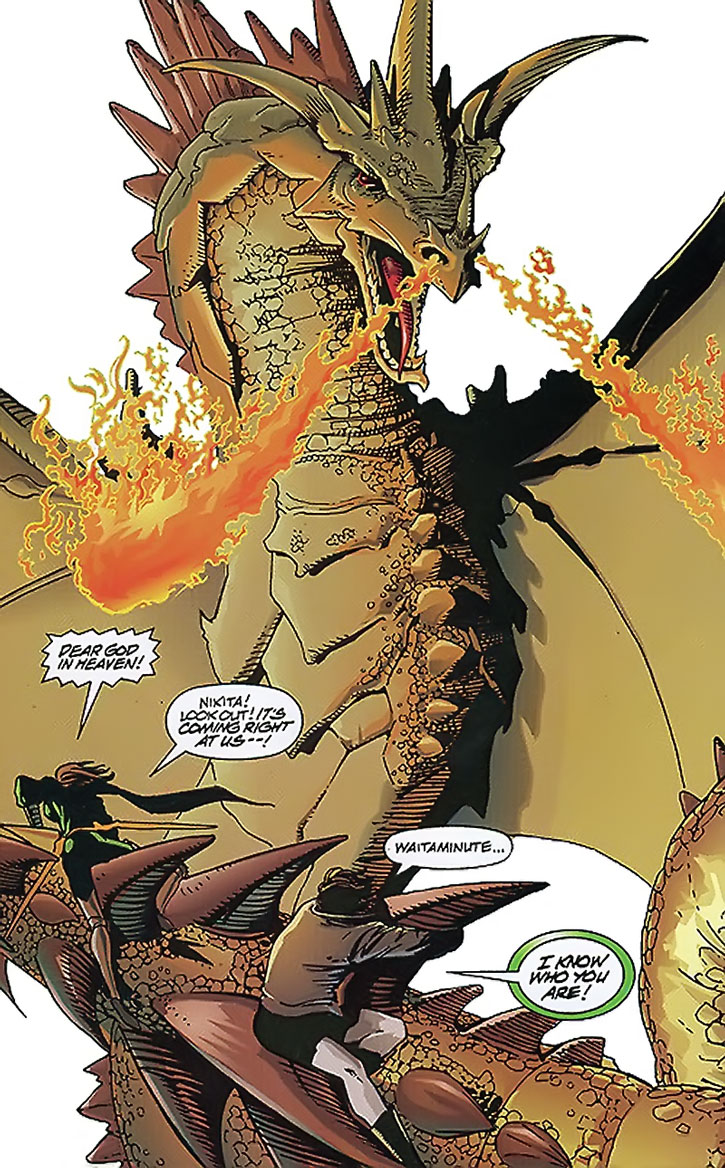 She woke to pandemonium, as the rest of Strikeback, led by Rascal, had stormed Dragonryder Island. But they accidentally released the locks which prevented Monster X from coming through from her home dimension.

Remembering the dragon which appears when she’s in danger, she puts herself in Monster X’s path. This did summon the dragon, who fought Monster X long enough for him to be dealt with.

The fighting done, Nikita announced that she’d be returning to her home dimension with her parents to find out where she’d come from. But she promised to return.

Independent and adventurous, Nikita rebelled against her father’s authoritarian nature. Her stubbornness caused a significant rift between the two.

Having learned her true history, she began to accept Mars’ actions a bit. She was curious enough about where she came from to accompany her parents back there.

“Listen you condescending freak, I am so tired of all you goons knocking me out, tying me up, pushing me around, and brutalizing me and my friends ! I’ve had it — and I’m not going to stand for it anymore !”

Bonuses and Limitations:
Animal Summoning only summons her dragon (-2), and only when her life is in imminent danger (-1). 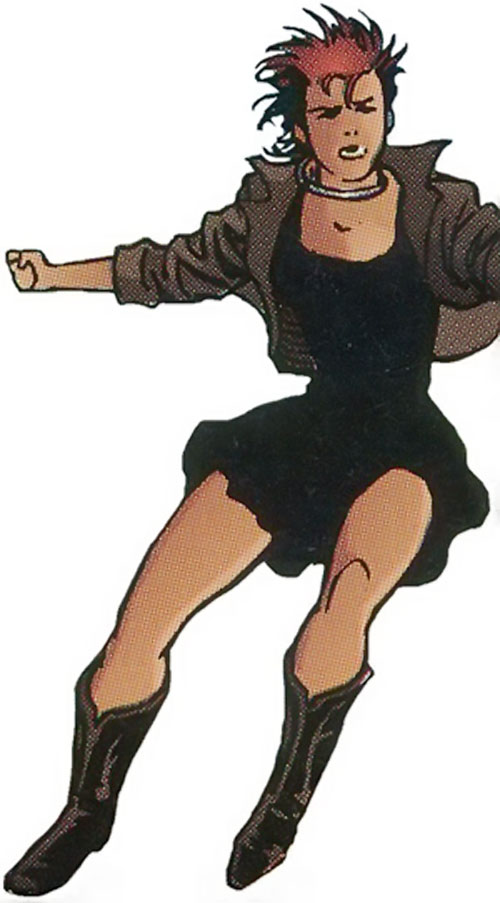