Aegeus was a two time enemy of Wonder Woman in 1982. He was armed each time by a different enemy of the Amazons from Mount Olympus.

In his “mundane” life, Nikos Aegeus had only the knowledge and skills of any random terrorist: gun usage, verbal scare tactics, evading authorities, and the like.

Upon meeting Bellerophon, he was issued the bridle to control Pegasus and the thunderbolts of Zeus, capable of both destruction and teleportation. Both of these weapons he lost in his retreat from Paradise Island.

Ares then issued him the Daggers of Vulcan, which can create portals to anywhere on Earth, as well as their normal murderous uses. These daggers can be summoned to Aegeus’s hands and are the only known weapons that can damage Wonder Woman’s lasso and bracelets. 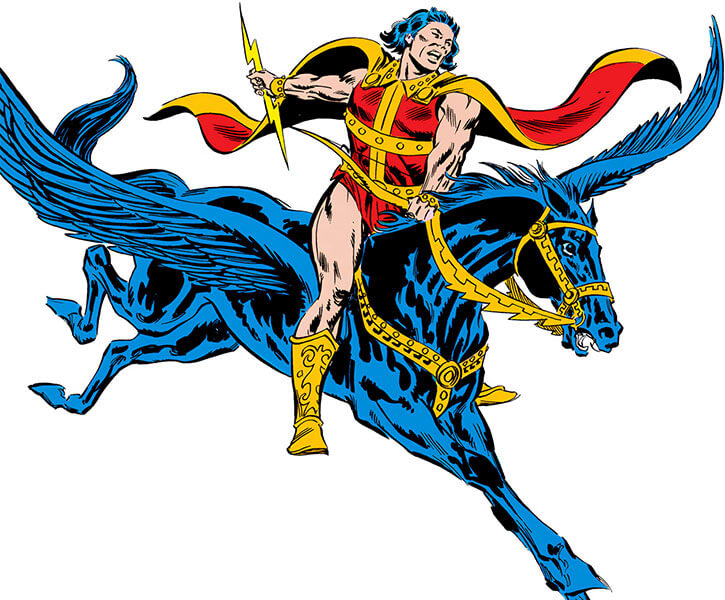 Nikos Aegeus was an ordinary terrorist at first. But he and his followers inadvertently took refuge on the original Themiscira, where the Amazons lived before relocating to Paradise Island.

On Themiscira, Aegeus met a single resident, Bellerophon, whom he unchained. Bellerophon, in turn, gave Aegeus a magical bridle with which to tame the winged Horse Pegasus, and several thunderbolts from Zeus.

In return, Bellerophon commanded that Aegeus find and take over Paradise Island, and use the Purple Ray there to restore Bellerophon’s sight, and with it his full powers.

Aegeus kidnapped Steve Trevor and tried to force him to reveal the location of Paradise Island. But Steve could only lead Aegeus to the clouds that always protect the Island from visibility. Aegeus could sense from there the way to find Paradise Island, however, and tried to invade.

Steve was able to hold him off with a hang-glider until Wonder Woman arrived and lassoed Pegasus, commanding him to throw Aegeus. Aegeus used a bolt of Zeus’s lightning to teleport himself to Mount Olympus. 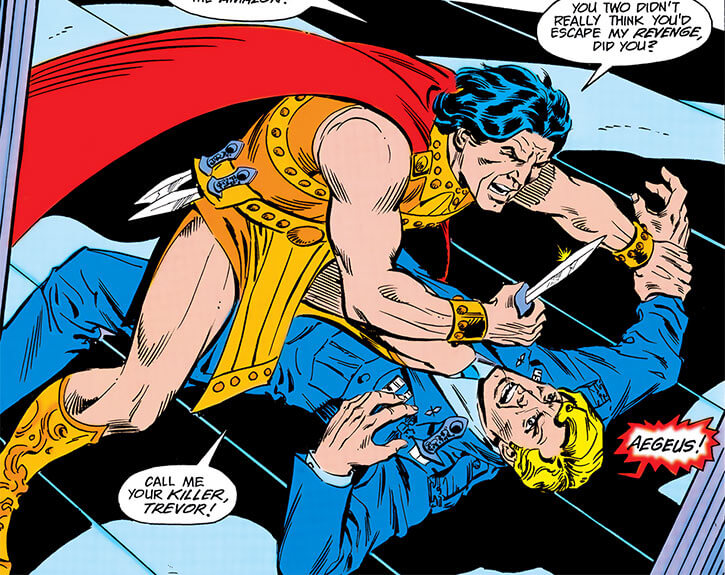 Once at Olympus, Aegeus met Ares, who re-armed Aegeus, this time with the Daggers of Vulcan.

First he stabbed Steve with one of his daggers before escaping while Wonder Woman took Steve to the hospital. His dagger was the first to cut Wonder Woman’s magic lasso and her left bracelet.

Later, Aegeus tried to kill retired senator Russell Abernathy in the hospital. But Wonder Woman released him at the behest of Keith Griggs in order to save the arms talks between the USA and the USSR. Griggs revealed that Aegeus was “working for a US Intelligence operative.” when he went after the retired Senator.

Aegeus is a broad shouldered brick. He speaks in the 1930s facsimile of medieval mannerisms.

As an ordinary terrorist he wore simple shirts, slacks and ersatz blazers.

As an agent of the evil side of Olympus, he wears a red vest and loincloth with gold trimmings.

As an ordinary terrorist, Aegeus was a practical man who did what he had to to get the job done, though he revelled in the power of his position.

Once magically armed, however, his thrill in using his new weapons overcame him completely.

“Beware, you winged merchants of destruction ! Your puny weapons and armaments mean nothing– to one who wields the thunderbolts of Zeus ! Beware the wrath of AEGEUS !”

This steed was lost at end of first appearance.