Nimrod is the ultimate Sentinel robot. It is the epitome of Sentinel technology and as such bears the latest artificial intelligence and weapon systems of the 21st century.

It is able to manipulate high intensity energy fields. This gives it the abilities to:

Nimrod possesses a very advanced artificial intelligence. It is capable of critical combat tactics and evaluation, although it is not a very fast thinker. A multitude of sensors including a futuristic Cerebro, telescopic eyes and a powerful radio transmitter and receiver makes it effective at tracking down its prey.

Its robotic body construction is the toughest possible. Powerful engines grants it superhuman strength and endurance. It can also change its appearance to resemble that of any human, something that comes in handy living among them.

Lastly it is equipped with a powerful learning program. It enables him to defeat any opponent after combat analysis. It is even capable of temporarily removing any psionic  powers the targets may possess.

As a mutant hunter it, of course, is programmed with all available information about any dead or living mutant known. No sense in trying to get away… you won’t be able to.

Nimrod is the result of Project Nimrod. It aimed at creating the most powerful Sentinel robot yet in a dystopic future reality, Earth-811. It apparently killed Ariel of the future timeline and went back after Rachel Summers to the current timeline.

There its first experience was the sight of a fishmonger being mugged. Responding to its programming it immediately terminated the mugger and befriended the worker. It took on a human form to blend in with humans better and took company with the worker.

Nimrod decided that mutants who were classified as outlaws by the government should indeed be exterminated. He fought the Juggernaut and the X-Men, but was defeated by Rogue. After this defeat, it successfully escaped and later resurfaced to fight the X-Men and the Hellfire Club.

It escaped again and upgraded itself after each defeat to become more formidable in the future. At the present it still continues its career as a vigilante crimefighter in NYC.

Nimrod later evolved into a different threat under the name “Bastion”.

Nimrod is a huge combat/hunter robot. It is clearly robotic in nature. It possesses a white silverly exterior made of an unknown alloy covering its entire body. Its face is completely red with sensors resembling human eyes, nose and mouth. In the chest it has a red triangle which is used as the focus for many beaming powers. No clear weaponry is visible.

This being looks far more powerful than any Terminator and anyone in the vicinity quickly realizes that trouble may be present. In its human guise is resembles a big black male clad in ordinary worker’s clothing.

Nimrod is the ultimate in Sentinel technology. As such, he sees mutants and most superhumans as criminal renegades to be hunted down and probably killed.

However, his time trip has caused him to reconsider his goals and methods. He is still considering his options, hence he has not yet begun any open war on mutants and superhumans.

He obeys his commands to protect normal humans. He will break off attacks if such harm would result from his actions. Nimrod usually uses a civilian identity that resembles a human black male and which enables him to go around unnoticed by its fellow humans.

The DC Universe is full of robots in one form or other. Mutant hunter-killer robots, OTOH, are quite rare. Nimrod could be Project Nimrod created at STAR Labs with the purpose of protecting humans but gone awry.

Another possibility is to have Lexcorp create him and send him to exterminate the metahuman community (the leap is not great from hunting mutants to hunting metahumans ; just some slight reprogramming).

To complete the picture it could actually be from a future Lexcorp, STAR Labs or other corporation with any kind of hunter-killer mission in our timeline, sort of like a Terminator.

Connections:
None, although the Sentinels would help it if they knew of its existence. The citizenry of the local neighborhoods are also likely to help it as they see it as a vigilante hero.

Equipment:
None, is in itself a gadget. 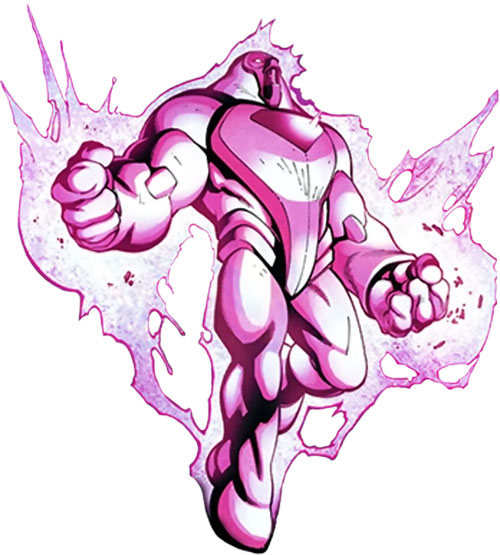 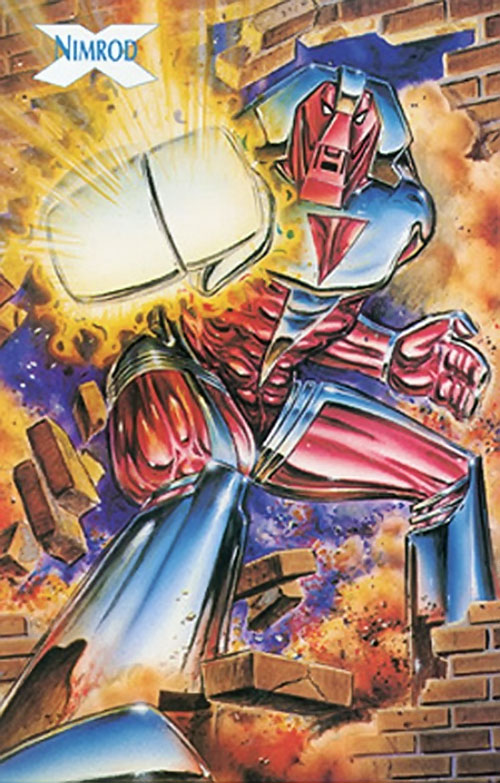