That’s right – simply “the ninja”. It was 1974, so there weren’t many of those running around in comic books yet, and simply being a ninja was distinctive. That gives him an archetypal, old-school elegance.

This early character was part of Iron Fist’s original story line – returning to the US to have his revenge. The Ninja returned in 1981 for a weird storyline about the past of K’un-lun, the secret city Iron Fist was raised in.

The Ninja is an awesome martial artist, especially with medieval Japanese weapons. He is more than match for a young Iron Fist, himself one of the greatest masters of kung-fu in the world.

The Ninja easily defeated one of the Sons of the Tiger, even though Bob Diamond was wearing his amulet at the time.

He has quasi-supernatural skills in the art of intrusion and other ninja-type endeavours. The Ninja can go anywhere and is incredibly stealthy.

As a mystical entity, the Ninja also has supernatural powers. He can inhabit the body of the owner of the Book of Many Things and turn it into a replica of his own, complete with weapons and ninja uniform.

In fact, this is the only way the Ninja could act in the physical world when trapped in the Book of Many Things. Otherwise he could also appear as a ghostly, silent vision.

He can disappear in a cloud of smoke or just fade in the shadows, teleporting himself (and, if desired, others) for up to several miles. The Ninja can, of course, see in pitch darkness.

The Ninja has on occasion made his fist or sword glow much like the iron fist. Howbeit, this seems to just be a special effect when putting extra effort behind an attack.

He also mentioned that part of the astral plane was his own personal dimension, crafted for him by Master Khan, where he reigned supreme. However, no significant effect was observed.

The man now only known as the Ninja was the greatest samurai of his generation in medieval Japan. He was called death by his contemporaries.

His cruelty and his taste for casual murder eventually made him a criminal. Though he killed all who tried to arrest him, he was now a ronin .

Drifting, the killer eventually found a new master, the powerful sorcerer Master Khan. Khan convinced the samurai to turn to the “dark arts” of the ninja, and then imbued his servitor with actual mystical powers.

During his studies at the side of Master Khan, the Ninja read the Book of Many Things. This is a famed, unique mystical tome. In the Book he found, among many secrets, a great revelation – how to enter the hidden city of K’un-Lun even when it wasn’t physically reachable from Earth.

K’un-Lun was a thorn in the side of his master, and its destruction would be a boon to Master Khan. Furthermore, it was a treasure trove of powerful martial arts secrets.

Attacking from another dimension, the Ninja surprised the defenders of K’un-Lun. He went through them like a scythe. All fell before his blade and terrible skill, all except one – Lei-Kung the Thunderer, who would later train Iron Fist.

The defeated Ninja was bound with iron manacles, since iron weakened mages of Khan’s order. K’un-Lun’s ruler, Yu-Ti, condemned him to be deprived of his physical form and mystically bound into the Book of Many Things, which was then added to k’un-Lun’s vast libraries.

Locked into the Book of Many Things

Much later, one of the infrequent visitors from Earth stole the book. He didn’t get far – attackers on Earth killed him as he fled. They had been waiting in ambush to rob anyone bearing K’un-Lun treasures. 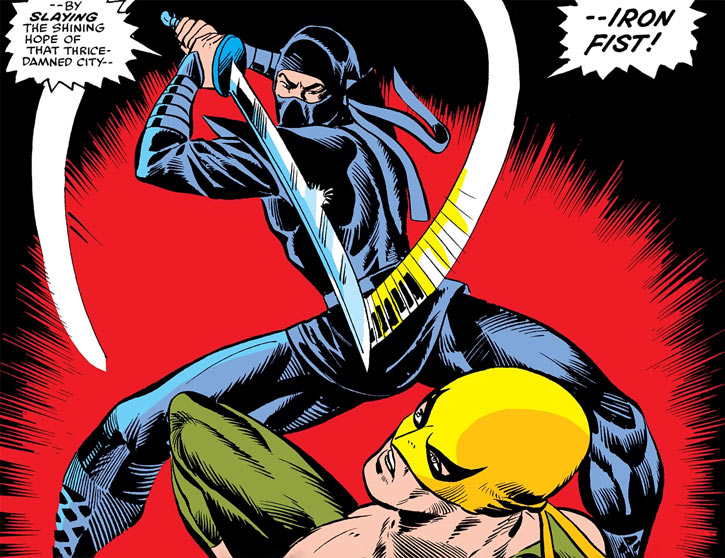 The mystical powers of the Ninja had increased while he was trapped in the Book. Thus, he mentally influenced one of the brigands. Hearing that the masters of the Cult of Kâli were godlike magicians, the Ninja arranged for the book to end up in the possession of the Cult. There, it was renamed the Book of Kâli.

However, the reputation of the masters was greatly exaggerated. They weren’t competent enough to use the book. They simply kept it as a sacred relic without using it, forbidding any cultist to touch it.

The Ninja was furious, and magically triggered an earthquake. He couldn’t fully control it and the temple collapsed, burying the Book for decades.

The Book was eventually found by Professor Wing, an archaeologist and historian specialized in “the mysteries of the Orient”. Since he seemed considerably more knowledgeable that the Kâli cultists, the Ninja hoped he could free him from the Book. Soon, Kâli cultists came after Wing to reclaim the tome.

The power of the Ninja had increased further. He could now physically possess Professor Wing and turn him into a duplicate of himself. Furthermore, the scholar did not remember about those possessions.

This proved quite sufficient to protect the professor. But the Ninja didn’t want to take any risks and needed a bodyguard to protect Wing when he couldn’t.

Professor Wing determined that K’un-Lun was about to interface with the Earth dimension. He sent his daughter Colleen to greet the man who would emerge from the fantastic city.

Despite his hatred for K’un-Lun, the pragmatic Ninja saw that Iron Fist would be an excellent bodyguard against the Cult of Kâli. He silently and stealthily assisted Iron Fist in his revenge against Harold Meachum, thrice saving the youth’s life so the Wings would have a protector.

The Cult of Kâli nevertheless kidnapped the Wings. They bound the professor in iron shackles, unwittingly preventing the Ninja from possessing him. The Ninja directed Iron Fist to the cultists’s hideout, and as soon as Wing was unshackled he possessed him and fought alongside Iron Fist and Colleen Wing.

During the fray, the Book was destroyed.

To his utter surprise, the Ninja wasn’t destroyed along with it. Yu-Ti had lied, and destroying the Book simply destroyed the Ninja’s prison without killing him. Fuming with hatred of K’un-Lunese and their tricks, the Ninja decided to kill Iron Fist and took him to the astral plane.

There the Ninja defeated Iron Fist, who was at a disadvantage due to the peculiar environment. However, the Ninja was so glad he had recovered the power of speech that he launched into a long expository tirade without checking his kill. Iron Fist, having adapted to the astral plane, renewed their duel.

When the iron fist and the Ninja’s sword collided, and unexpected explosion wrecked the little pocket of the astral plane. Iron Fist was regurgitated back on Earth. The Ninja was nowhere to be seen.

The Ninja survived and renewed his allegiance to Master Khan. With his star henchman back, Master Khan was able to locate the various jade tiger amulets owned by the Sons of the Tiger.

The Ninja recovered the amulets, nearly killing Bob Diamond in the process. With his deadly agent handing him the assembled amulets, Master Khan summoned the jade tiger.

In turn, the magic tiger opened a dimensional rip leading to k’un-Lun, so Master Khan could destroy the city at last. While the wizard prepared, he summoned the Ninja to start weakening the K’un-Lunese defences.

Master Khan and the Ninja were eventually faced with Iron Fist, Power Man, Lei Kung and a small army of K’un-Lun warriors. Iron Fist defeated the Ninja in a duel. Master Khan, knowing the value of a good servant, banished the Ninja to safety.

The Ninja hasn’t been seen since.

The Ninja is a silent badass and a stone cold killer.

Originally he never spoke, and would find indirect ways to convey a message. For instance, to tell Iron Fist that he was wanted for the murder of Meachum, he wiped his bloody sword on a newspaper with headlines about Iron Fist being wanted and tossed the paper to him.

Once he regained the power of speech he talked a mile a minute for a while, but by his next appearance he had gone back to being silent and relentless. Like all good ninja should be !

Drawbacks:
Power Loss (Powers reduced to zero APs when bound by iron, or against a target bound by iron), MPR (the Ninja cannot speak)).

Rituals:
The Ninja has mentioned using rituals to summon an earthquake, and rituals for influencing the mind of the one holding the Book (which he did before he became able to possess the owners), but has never been seen using them. It is possible they only work through the Book of Many Things, and when the Ninja is in his own dimension.

He also had a ritual to enter another dimension (presumably the astral plane) and locate and reach K’un-Lun from there, with the Book as a material component.

After the Book was destroyed, the Ninja lost his Personality Transfer and Spirit Travel Powers – and possibly his Immortal Advantage. He could, however, exist physically like any person can, and recovered his power of speech (losing the MPR).

Eventually, he renewed his Connection with Master Khan (as a Low Connection), which he had lost during his time within the Book.

Some of the skills are speculative. I stuck with the “1970s super-ninja” theme when filling the gaps. 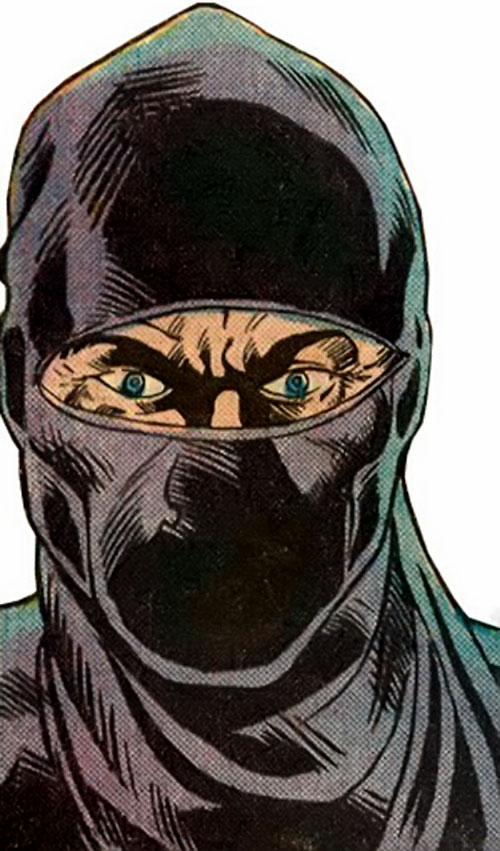 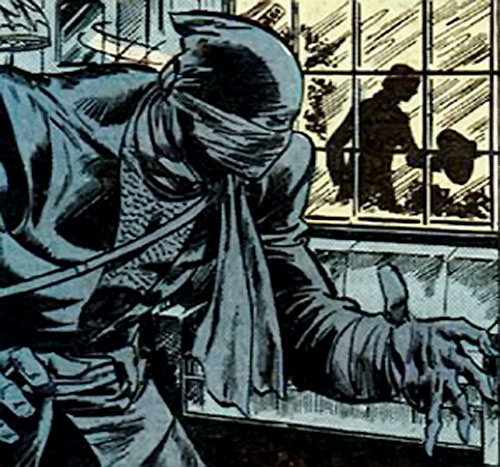 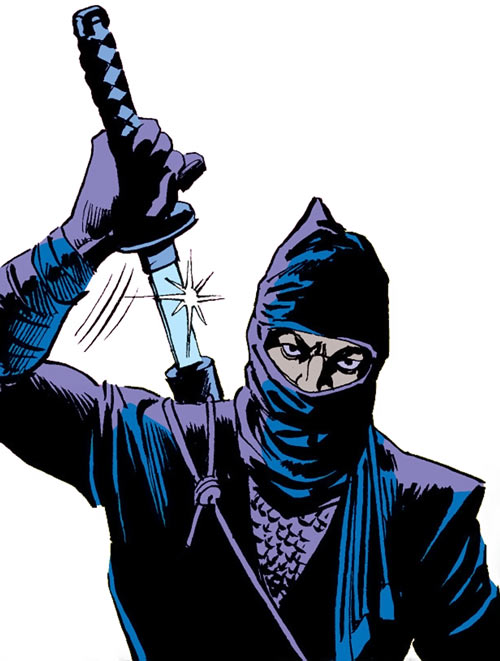