Hollis Mason was an experienced police officer who trained constantly in order to keep himself in peak physical shape.

He’s also a good mechanic. However, his expertise with cars lies with models long obsolete within the Watchmen-verse.

Born in 1916, Hollis Mason spent his early years on a farm in Montana. His grandfather, whom he was named after, was a highly religious and moral individual. Although young Hollis disliked the man, growing up with him left an indelible stamp upon the boy’s morality.

Upon moving to New York with his mother and father in 1928, Hollis was confronted by the sheer darkness and horror present in the city. The things the young boy saw raised an ethical revulsion within him that he was never able to shake off.

Whenever it became too much to handle, his main escape lay within the black-and-white world of pulp  novels, where the purity of the hero was never in doubt and evildoers were always punished.

Hollis’ sense of justice eventually led him to attend the police academy, and he joined the New York Police Department in 1938.

Later that year, inspired by Superman comics and the real-life exploits of the Hooded Justice, Mason decided to become a costumed hero himself. After he devoted all of his free time to physical training, one of his fellow officers took to sarcastically calling him “Nite-Owl”. Mason decided that it had a nice ring to it.

Nite Owl and the Minutemen

After a few successful months as a costumed adventurer, he answered an ad in the Gazette asking other heroes to come forth, and subsequently became a member of the Minutemen. Nite-Owl would prove to be one of the most effective members of the team, with his police training and hand-to-hand combat skills proving indispensable to the group.

During World War II, Mason’s occupation as a police officer exempted him from the draft. He and the other remaining Minutemen stayed in America, where they fought domestic threats.

In 1949, the Minutemen broke up for good. Nite-Owl continued working as a solo costumed hero.

In 1954, during the HUAC hearings, the former Minutemen were called upon to reveal their secret identities to a representative. Mason complied and passed.

Around this point villains became less flashy in spite of their strange names. They took to such underground crimes as drugs and vice – which often left Mason feeling rather ridiculous as the only costumed person in the room.

Crimes also began taking on a rather sordid and depressing edge. Mason would later attribute this to all the optimism which America had felt post-WWII wearing thin and leaving an ominous feeling in the air.

At some point just prior to 1962, Mason obtained his dog sidekick Phantom. However, at 46 years old and feeling it, he saw himself as superfluous in a world with Doctor Manhattan. He publically retired as a superhero and a cop and wrote a memoir, entitled Under the Hood, wherein he made numerous controversial comments and revelations concerning his former career.

Mason became a mechanic and opened his own garage post-retirement. Unfortunately, Doctor Manhattan’s ability to synthesize lithium made electric cars viable and cheap, rendering Mason’s skills nearly useless and causing his retirement to be considerably less pleasant than he’d hoped.

Shortly after he retired, Mason was approached by Daniel Dreiberg, a young man who had eagerly followed his exploits and who sought to follow in his footsteps as the second Nite-Owl. Impressed by Dreiberg’s zeal, as well as the technology he intended to bring to bear in the war against crime, Mason was more than glad to acquiesce. 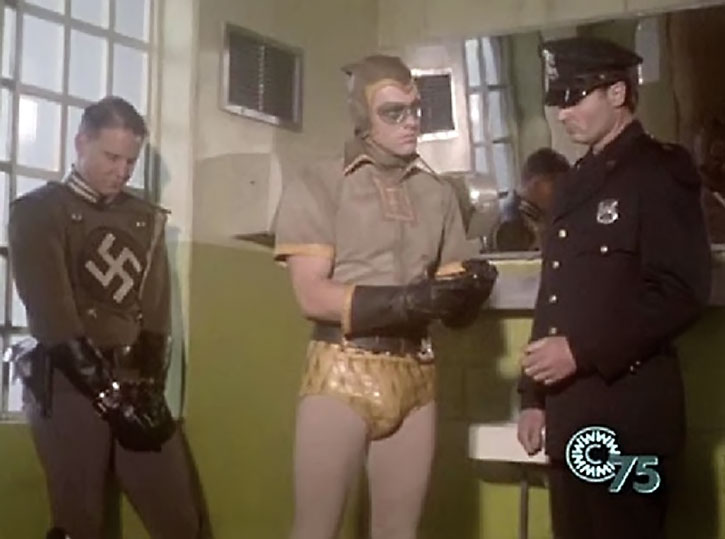 This marked the beginning of a close friendship, and Dreiberg would frequently visit Mason, looking up to him as a mentor.

(In the DC Heroes RPG Who Watches the Watchmen module, Captain Metropolis attempted to force the Crimebusters to come together in 1966 by secretly arranging to have their loved ones kidnapped. In Nite-Owl II’s case, the victim was Hollis Mason. If this is considered canon, all the victims were rescued, the Crimebusters *still* didn’t form, and Metropolis apparently got off scot-free.)

During the events of Watchmen, Mason kept up his cordial relations with Dan Dreiberg and Sally Jupiter. However, he was regarded by Rorschach as a possible suspect in the murder of Edward Blake.

Tragically, after Nite-Owl II and Silk Spectre II sprang Rorschach from prison, a group of Knot-Top Gang members heard that “Nite-Owl” was responsible for the breakout. They broke into Hollis Mason’s apartment and beat the old man to death.

Hollis Mason was a sharp-featured man who began his superheroic career in his early 20s and continued into his mid-40s.

Nite-Owl’s costume was designed to leave the arms and legs as free as possible, and consisted of a tough leather tunic, light chainmail briefs, and a leather-over-chainmail headpiece. His belt buckle is a crescent moon symbol. A brown domino mask completed the outfit.

Like Superman, his inspiration, Hollis Mason was an optimistic, confident and down-to-earth figure. He remained so no matter what hard knocks life threw at him. Lawrence Schexnayder even described him as a Boy Scout at one point.

He was unique among the Minutemen, and possibly among the characters of the series as a whole, in that his reasons for becoming a costumed adventurer were wholly altruistic. They were not born of psychological issues or the desire to make money.

This makes him the most well-adjusted and mentally stable of all the characters in Watchmen, which admittedly isn’t saying much.

Mason appears to have gotten along well with all the Minutemen (even the standoffish Silhouette), and seems to have taken a role in mediating conflicts among them. However, he despised the Comedian, whom he never forgave for his attempted rape of Sally Jupiter, and whose cold-hearted brutality repulsed him.

After his retirement, Hollis looked upon his career as Nite-Owl as something to be proud of and a little embarrassed about. He was honored when Dan Dreiberg took up his name, and regarded the younger man as a better crimefighter than he had ever been.

(1939)
[As the Minutemen are squabbling.]
“C’mon, what’s all this discord I hear ? Meeting’s over ! Listen, everyone meet in the lobby in five minutes. We’ll go back to the Owl’s Nest for a beer.” 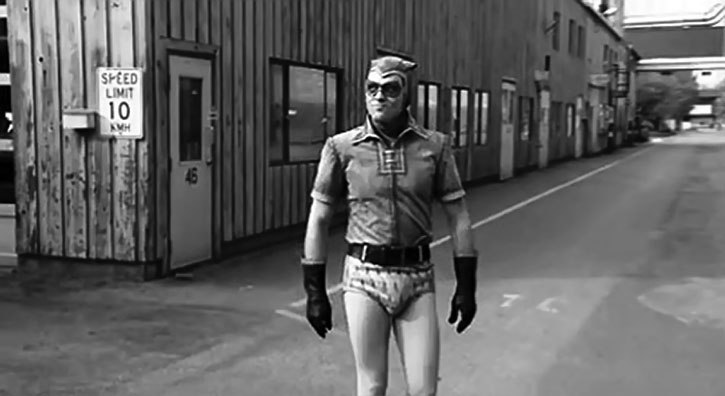 [Excerpt from Under the Hood]
“I can’t answer for anybody else, and I suspect that all our answers would be different anyway, but in my case it’s fairly straightforward: I like the idea of adventure, and I feel bad unless I’m doing good. I’ve heard all the psychologists’ theories, and I’ve heard all the jokes and the rumors and the innuendo, but what it comes down to for me is that I dressed up like an owl and fought crime because it was fun and because it needed doing and because I goddam felt like it.”

(1985)
Sally Jupiter: “You ever try on your old duds ?”
Hollis Mason: “Nah… it’s different for guys. I’d feel stupid… although all the kids ’round here are preparing for Halloween next week, so who knows, maybe I’ll dig out the old threads and go trick-or-treatin’.”

Nite-Owl’s early life and career remain much the same, with Mason being inspired to take up the cowl by pulp and radio characters such as The Spider and the Green Hornet as well as real-life heroes such as the Crimson Avenger and the Hooded Justice.

Early in his career, Nite-Owl I occasionally found himself working alongside Hawkman, Hawkgirl, and the Black Condor (aka Richard Grey, Jr.). The quartet briefly considered forming an official group, but it didn’t work out, due largely to distance issues.

As in Watchmen, he joined the Minutemen, and served until their temporary breakup in World War II. At this point he joined the All-Star Squadron alongside those Minutemen who hadn’t been drafted.

Toward the very end of his career, Nite-Owl I worked with Katar and Shayera Hol, the Hawkman and Hawkgirl from Thanagar. They got along well due to their common link of being police officers.

As in Watchmen, Mason retired after over 20 years as a hero and was replaced by Daniel Dreiberg. Dreiberg would himself permanently retire after marrying Silk Spectre and having children, for whom Hollis was the godfather.

Recently, while visiting his former A2S teammate Jack Weston, aka Minute-Man, the ninetysomething Hollis Mason was killed by agents of the Fourth Reich as he futilely and feebly attempted to defend his friend. His death has prompted his young goddaughters to take on the mantles of Nite-Owl III and Silk Spectre III in order to avenge him.

Nite-Owl obtained this faithful dog fairly late in his career. If the “Phantom” we see in 1985 is the same dog as this one, than he’s unusually long-lived.

Sadly, he seems to have been killed alongside his master.

As of 1985, the retired Hollis Mason’s once-impressive physical skills have declined considerably. It’s a safe bet to assume that his physical stats are probably 2/2/2, and it seems likely that he’s lost Acrobatics, Thief, Martial Artist, and possibly Weaponry entirely.

On the upside, his Gadgetry may have risen slightly, due to experience.

His Connections have also taken a hit. With every other member of the Minutemen dead or institutionalized, Sally Jupiter is his last Connection from the group. After twenty-odd years of retirement, it also seems unlikely that he retains his NYPD and Street Connections.

By Civanfan (based on Ray Winninger for Mayfair).

Source of Character: Watchmen Graphic Novel, the Who Watches the Watchmen module by Dan Greenburg, the Watchmen Sourcebook and Taking out the Trash module by Ray Winninger (from which I cribbed most of the History and stats, though I disagreed with a few.) 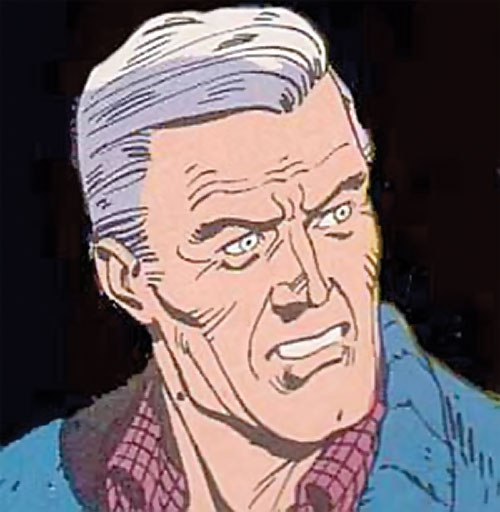 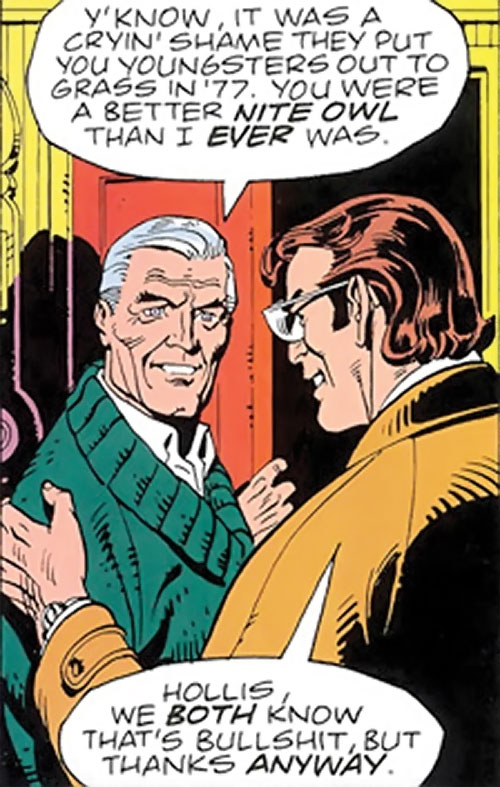 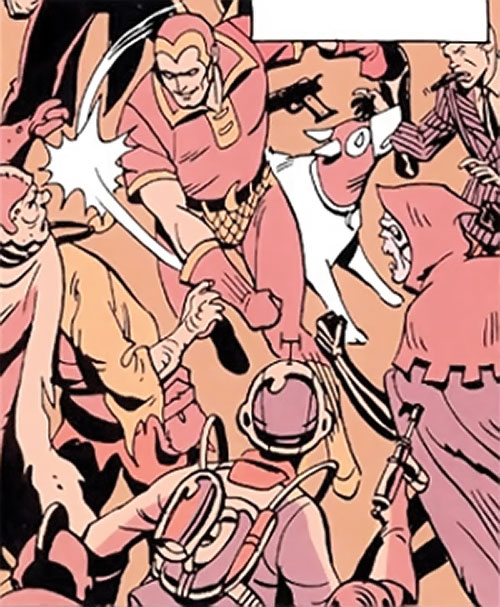 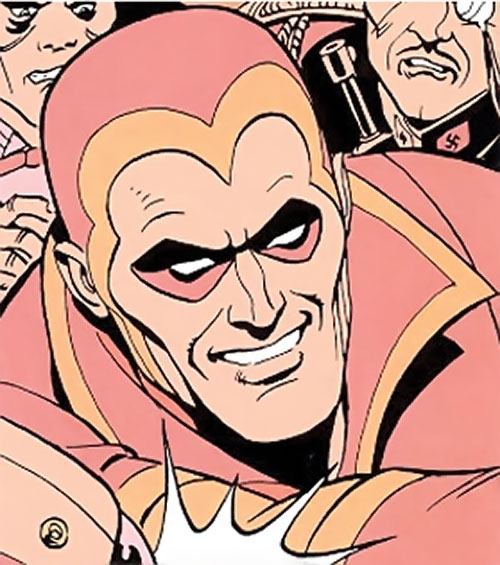 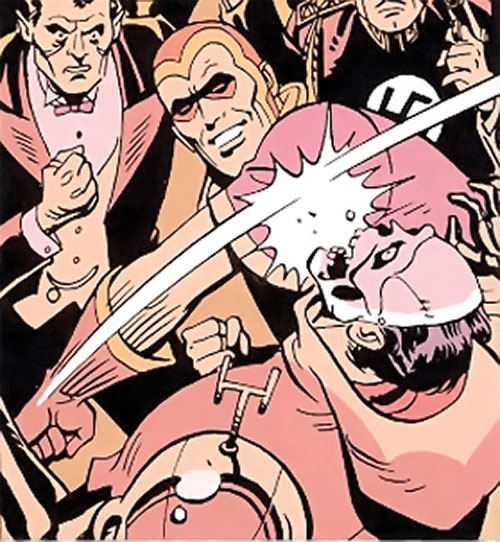 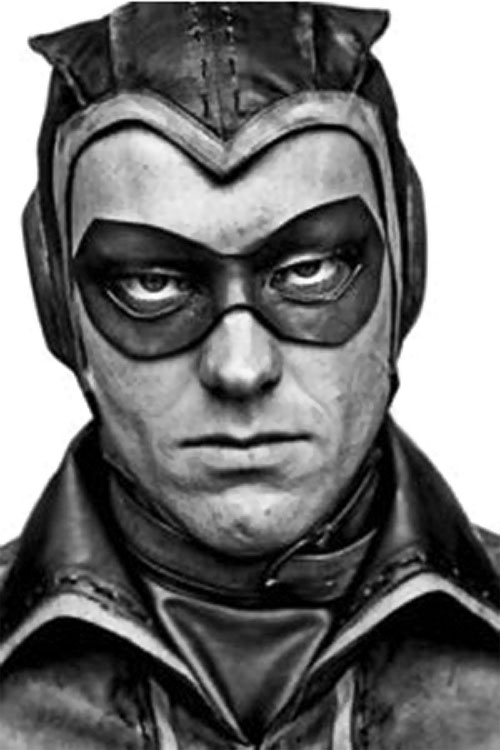 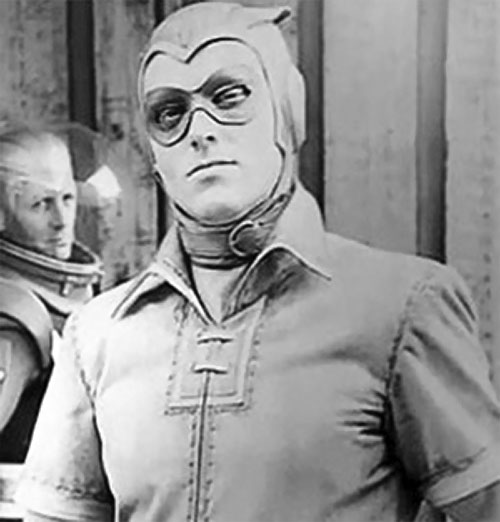