Nite-Wing is a very aggressive brawler with a very large capacity for violence. He’s especially good with bats, steel clubs and the like.

He works out obsessively, and is remarkably strong and muscular. Once flushed with adrenaline he’s also pretty fast. Thus, he has proven able to brutally subdue men armed with firearms without being shot.

While uneducated, he has a mean cunning that is critical in his line of work. And he certainly knows how to outmaneuver less confident opponents using his environment.

As a baby, Tad was discovered under a parked bus during a cold winter night. His parents were never found. He was thus raised by the Blüdhaven Child Services. That meant a corrupt, unprofessional environment that barely acknowledged his presence and treated him harshly.

He was named Tad Ryerstad. Tad for tadpole as he was on the short side, and Ryerstad after a local brand of beer.

He was adopted when only a few months old in abnormal circumstances. The adoptive parents had no visible mean of support and were obviously unfit for raising a kid. For instance, it was not uncommon for the man to beat his wife. As they lived their bleak life, mostly ignoring him, young Tad retreated into comic books. He especially loved General Glory and Tarantula comics.

Although his adoptive father said he was a salesman, he was actually a fence. As a result, he was arrested when Tad was about 10. He quickly cut a deal with the cops, becoming an informant. He entered a routine of being busted, squealing and getting out of prison a few days later.

This in turn led to a great amount of fighting with his wife and various domestic violence calls from the neighbours.

Tad, meanwhile, really wanted to be a super-hero. He didn’t want to be a loser punk like his dad. In fact he wanted to punish them, as well as everyone who ever hurt him or laughed at him for being a withdrawn, sullen son of a petty criminal. He knew the cops were corrupt from watching his father deal. This meant that he had to find justice outside of the law.

At 12, he anonymously warned a dangerous pusher that his father was ratting on him. As a result, his adoptive father was quickly executed by the mob. Tad with satisfied with such rough “justice”. He thought that he had done something heroic. But he didn’t realise his mother would be arrested as an accessory to her husband’s crimes.

Tad started bouncing through foster homes. It didn’t go well at all. Ryerstad had “unsolved issues of rage”, and was a vicious, violent teenager. At about 14 or 15, he just walked away after a brawl with yet another adoptive family during Christmas. The child services made but the most cursory effort at finding him.

Who robs the robbers ?

Within days, he walked straight into a small group of young thugs beating a guy in a Santa Klaus costume. He savagely assaulted them with a nearby shovel.

His mean of sustenance quickly became assaulting suspected criminals with improvised blunt weapons, taking their cash and running away. Seeing himself as a soldier in a lonely war against crimes, he started :

He once became associated with a neo-Nazi movement with a “take back the streets” platform. But Tad quickly saw that they were amateurs, ideologues and losers. He denounced them to the police after using them to get revenge on a few childhood humiliations.

I shall be that hero !

Tad lived alone in a squat near Parkthorne Avenue. Though he couldn’t read well, his cultural diet consisted mainly of cheap comic books and paperback novels. These usually were about pulp  heroes and he-man super-spies. Once he managed to get a stolen TV, he also subsisted on tons of cartoons, watching them all.

Tad still wanted to be a great man and a hero, too. But having grown up alone on the mean streets, he was actually a brutal sociopath. His idea of being a hero was to be brutal toward all kinds of criminals, to gain the admiration of the adoring masses.

His views ossified around the idea that most heroes were bleeding-heart nancies and that dealing with criminals involved beating them so hard they would be scared for life.

At 16 or so, he started his crusade around his squat. He beat up homeless people, beat up graffiti-spraying kids and made them clean the walls, beat up some pushers and hustlers.

He also beat up innocents. That included a man who was just waiting for his brother to pick him up with his car – Tad though he was a pusher. He also assault a Black guy who was taking his two White nephews to the movies. *Obviously* a Black guy with two White kids was some kind of kidnapper.

The eye of the spider

At one point, Tad met the ageing John Law. Law was the author of several of the pulp fiction novels he had enjoyed. He also had been the Tarantula several decades ago. Although the old man didn’t like Tad at all, the youth was fascinated with Law having been a real, live super-hero.

Ryerstad decided he would be one himself. Not just a vigilante anymore, but a costumed vigilante. His “costume” was a mask, a hockey jersey, fatigues and combat boots.

He wasn’t finding a name, however. But at that moment, a giant bat flew in and… no, wait. Wrong story. At that moment, he saw neon signs on the local grocery claiming it was “Open All Nite” and selling “Hot Chicken Wings”. Thus Tad became Nite-Wing. He wrote his name with appliqué on his jersey.

Nite-Wing’s career almost was very, very short. He spotted four gangbangers engaged in crime, approached and appeared on top of a nearby low wall. Nite-Wing proclaimed that evil doers should beware blah blah while striking an action pose. The four kids were very unimpressed and gunned him down.

Thanks to his sturdy constitution, Tad survived. He was rushed to the nearest hospital. However, when it became known a masked vigilante named Nite-Wing was in the hospital, every criminal faction in Blüdhaven, starting with the police, started converging on the hospital.

They all thought that they had cheap shot at killing Nightwing. This actual hero had been in town for some week and had started doing serious damage.

Learning that he was supposed to be in the hospital, Nightwing rushed in. He managed to repel all killers with a semi-conscious Tad in his hospital bed. Then he sent Ryerstad to Dr. Leslie Thompkins’ in Gotham, where he made a full recovery.

It was only a speed bump for Tad. He came back to Blüdhaven and resumed his Nite-Wing crusade. However, he was arrested when he triumphantly brought cops clobbered criminals and their guns.

Somebody mentioned that to police chief Redhorn. The deeply corrupt chief decided to use the vigilante as his weapon. It would allow him to gain traction against his criminal associates, and make some power for himself.

Redhorn made a big show of covertly freeing Ryerstad and wanting him to be the Batman to his Gordon. Then he gave Tad the white-hot files he had accumulated over all of Blüdhaven’s underworld.

Nite-Wing, living in his own simplistic world, eagerly hunted down some of these criminals in his own style. He tortured two mobd associates to death by dragging them behind their car. Then he graduated to killing one of the Blockbuster’s wiseguys by ramming his car in a concrete pillar with a garbage truck. Ryerstad was ecstatic.

Redhorn was not. What was meant to be simple harassment and taking out some lower level mobsters turned to explosive, out of control murder with astonishing speed.

I’m just working for the Man

Redhorn sent Nite-Wing to kill another criminal. But it was a trap set up by the police to get rid of this loose canon. Nite-Wing bumped into Nightwing and mad-dog killer Torque when investigating the ambush site. Torque nearly blew them up before fleeing, then the two vigilantes were attacked by a waiting SWAT team.

When Nightwing remarked the SWAT had been there *way* to fast and something was up, Nite-Wing realised Redhorn had tried to kill him. He went to his home. Redhorn tried to gun Ryerstad down and failed. Nite-Wing let him live, being a hero and all, but took all of Redhorn’s files with him.

Reading the neon writing on the wall, Redhorn left on the next day on a very long fishing trip someplace far away.

Nightwing, unaware of Tad’s true nature and only seeing his obvious eagerness at being a big hero, agreed to train him and take him as a partner. But he asked him Tad forego the Nite-Wing name, to avoid any further confusion. Tad started showing some talent for physical training, but his big contributions where the files he produced.

Nightwing had these scanned and uploaded to Oracle’s immediately. Now the crimefighters had trial-grade dirt on Blüdhaven’s head honcho – Blockbuster.

But Blockbuster captured Tad and Nightwing, and began to torture Nightwing. This is when Cisco Blaine, a deep cover FBI agent who had worked his way up to being a Blockbuster lieutenant, came in. He saved Nightwing but some time later Ryerstad, convinced Blaine was a criminal, beat him to death with a metal bar. Nightwing arrested him for the murder of a Federal agent.

In prison, Ryerstad allied with Torque. Torque had a cunning and destructive plan to get out of jail. And it worked, with Tad’s help. Both fled to a hideout in the subway. Tad finally realised that Torque was a criminal mastermind, and confronted him. In the melee, Torque was shot twice in the chest by his own gun. He died as Tad fled.

But problems continued. Chief Redhorn was murdered after returning to Blüdhaven, and Nite-Wing was framed for it. Desperate to prove he wasn’t a cop-killer, Tad summoned Nightwing. He used a large searchlight to shine a Nightwing logo ‘pon passing clouds, like in Gotham.

Nightwing knew Tad was innocent of that murder. His own investigations had determined Tarantula (Catalina Flores) was the murderer. He cut a deal with Nite-Wing and sent him, wired, to Tarantula’s home. Nite-Wing promised that he wouldn’t attempt to resist arrest later on.

Tarantula suspected that Ryerstad was wired, and the situation degenerated into a fight. Tarantula attempted to kill Nite-Wing while yelling in order to give the impression she defended herself from an attempt at rape. Nite-Wing disarmed her, but their fight lasted long enough to be interrupted by the police.

As they were taken away Tarantula was angry enough to yell that “he couldn’t prove anything”. That gave some weight to Nite-Wing’s accusations.

As per deal with Nightwing, Nite-Wing let himself be arrested to properly face accusations of having murdered the chief of police.

A short but very muscular guy who look a bit like a young Guy Gardner. The later is because of their shared admiration for General Glory, expressed through their haircut.

Tad really, really wants to be a hero. He is sincere, even naïve about it. Unfortunately, for him being a hero means :

Never having had any education, he spends his time eating junk (food a child would love), watching cartoons, doing pushups and “patrolling”. It’s all pretty sad, really.

Tad does not use guns, because his favourite comic book heroes don’t.

“Stop right there, evil-doers ! You will now face justice at the hands of… Nite-Wing !” 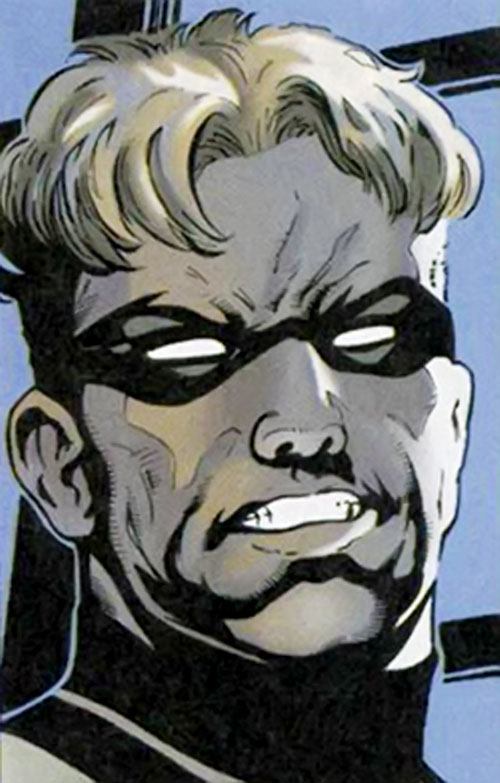 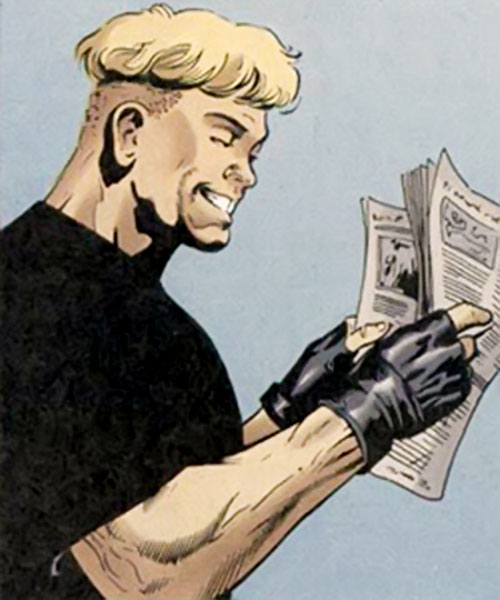