During a 1983/84 adventure, the Black Widow (Natalia Romanova) ran into a cadre of stock killers, straight from a B-list action movie.

Like the rest N’Kama was a central casting type… but he was a little bit cool. And we’re not exactly awash with Zulu characters in super-hero books.

N’Kama is “the greatest of the Zulu warriors”.

He uses his great skills in tracking and stalking to hunt human preys for a fee.

In practice he was just a fighty extra, but a little development could go a long way. 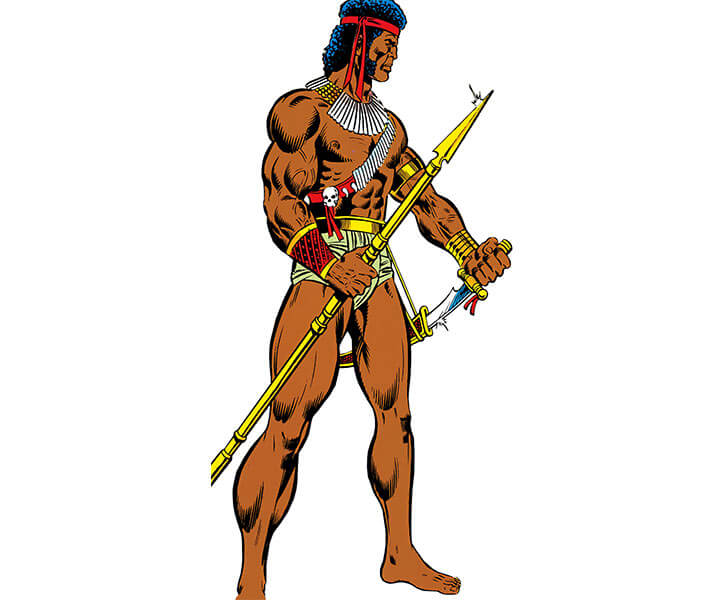 N’Kama was part of an international group of assassins assembled by Damon Dran, the Indestructible Man.

They were to capture the Black Widow as a part of an elaborate plan to destroy S.H.I.E.L.D..

Although they briefly managed to capture her, she defeated them all… except for the Iron Maiden. 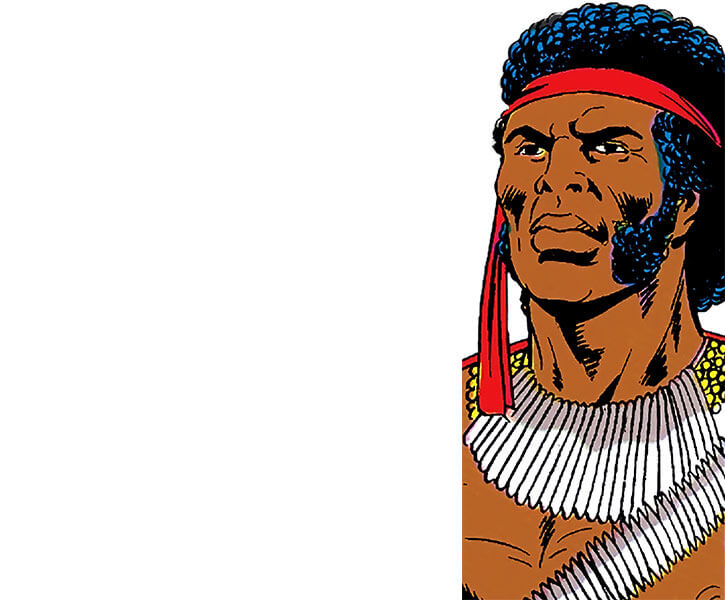 N’Kama does the “noble savage prince” routine from some 1960s jungle movie.

He’ll fight honorably. For instance, though he successfully ambushed the Black Widow, he purposefully missed with his spear instead of skewering her by surprise. So she’d get a fighting chance.

He’ll spend most of his time commenting on the skill and fierceness of pretty much any skilled and/or fierce opponent.

Your objective when playing N’Kama is to use as many metaphors and parallels containing African wildlife as you can squeeze in. And then add a few more. Preferably about lions.

The rest of the time, hang around standing while holding your spear and looking proud. Like a lion !

(So, yeah, feel free to make characterisation improvements if you use him in a story.)

“This one is more dangerous than a cornered lioness !”

Maybe he fought Congo Bill at one point ! Or some other dated and embarrassing character.

If you instead develop him as a more credible character, N’Kama may have been involved in Manhunter’s war against the Council.

N’Kama is a low-cinematicThe level of power and (un)realism found in a spectacular action movie. fighter, but since he’s just a mook his durability was lowballed.

Raising his BODY by 1 AP, and his Hero Points to 020 or so would make him more able to go the distance. For instance if he’s a solo opponent rather than a member of a team.