While ostensibly trained in armed combat, he’s even more skilled at avoiding it. He will generally only get involved after it’s over, at which point he’ll kick whoever’s down and, preferably, unconscious.

He can fight if absolutely necessary. But it’ll always be dirty, and usually effective.

He’s a competent pickpocket and petty thief, and extremely stealthy. At one point he sidled past the alert bodyguards of the Low King of the dwarves, and only Vimes noticed his approach.

He’s also an amateur folk dancer, and keeps up to date on the latest advances in weapons technology.

Growing up on the streets of Ankh-Morpork – which were safer than home on the occasions when Sconner wasn’t in tanty – Nobby became what’s politely referred to as an urchin.

In addition to petty theft he was a useful source of information and spying for a number of well-to-do patrons.

Nobby got caught up in the troubles, but always managed to avoid most of it befalling him directly.

As he grew up he joined some army or other, though he’d often change mid battle if it looked like he was on the losing side. Not that he actually got close to the battle while it was going on, preferring to wait till it’d moved along so he could loot in peace.

Finishing his time in the army (quite possibly having served in every available regiment, if only briefly) he joined the Ankh-Morpork Watch. It’s state of neglect by this time is evidenced by the fact they accepted him, and he generally patrolled alongside Sgt. Fred Colon.

On learning he was the Earl of Ankh, Nobby was introduced into high society. High society found him disturbingly mesmerising, but due to his rank everyone treated him well.

He started to enjoy it until a cabal of nobles tried to recruit him into a scheme to overthrow Lord Vetinari and install Nobby as king. (This’d been why his earldom was fabricated, to play on the rumours of royalty within the Watch, using someone more pliant than Carrot.)

Petrified at what Commander Vimes would say, Nobby leapt through a window and legged it back to the common life.

Nobby and Colon were recruited by Lord Vetinari to escort him on a secret mission – since he valued their stupidity. They travelled in Leonard of Quirm’s submersible, covertly exploring underneath the risen island of Leshp.

They then travelled to the capital of Klatch, with whom Ankh-Morpork was at war. They reconnoitred in disguise, Nobby dressed up as a veiled woman.

Nobby found the experience liberating. When they returned home insisted on dressing as women when it was called for to entrap unlicensed thieves – even if female Watch officers were available.

This only lasted until she tried making distressed pudding for him, which was nothing like the distress his mother could inflict on a pudding.

Visiting the goblin caves near the Ramkin country estates, Nobby caught the eye of the goblin girl, Shine of the Rainbow. She moved to Ankh-Morpork, where they now live together.

Four foot tall, bandy legged, with the muscle tone of an elastic band, Nobby finds it hard to convince anyone he actually is human. Even a note signed by Lord Vetinari doesn’t do it.

He tends to speak out of the corner of his mouth, due to the cigarette usually stuck in the other corner. He smokes incessantly, cigarettes becoming dog-ends almost immediately in his hands, and remaining so until lodged in the elephant graveyard of cigarettes behind his ears.

While he lies as easily as breathing (which in Ankh-Morpork can admittedly be a challenge) if under any pressure his anxieties show on his face, which can be an open book – albeit one that’d be banned in many countries.

When out of uniform he tends to be a bit of a fashion peacock, dressing flashily.

A staunch coward and thief, Nobby avoids trouble until it’s over, but might stay out of sight nearby if it looks like there might be pickings worth nicking afterwards.

Easy-going and friendly, despite his kleptomania Nobby is a useful Watchman, if only for teaching new recruits the things it’d be useful to know on the job but wrong to teach them.

He’s lazy rather than stupid, and doesn’t put much effort into detectoring, but will often gently tease his closest friend Sgt. Colon, who’s never sure he’s being had.

Captain Vimes: “What are you doing ?”
Nobby: “Searchingthebodiessir. For incriminating evidence, and that.”
Vimes: “In their money pouches ?”
Nobby: “You never know, sir.”

Captain Vimes: “Corporal Nobbs, why are you kicking people when they’re down ?”
Nobby: “Safest way, sir.”

“You two can bloody well stop that. Why shouldn’t I know a lady when I sees one ? She gave me a cup of tea in a cup fin as paper and a silver spoon in it. And I gave it back to her, so you can stop looking at me like that !”

Nobby: “I bin in there once. Checked the door one dark night and it just came open in my hand.”
Sgt. Colon: “Eventually, I expect.”
Nobby: “Well, I had to go in, didn’t I, to check there was no miscreanting going on.”

Vimes: “Our Corporal Nobbs has taken him off to the Watch morgue this morning, probably nicking any small items of personal jewellery he had on him, but that’s just Nobby’s way. He’s got a criminal mind has our Nobby. But I’ll say this for him: he hasn’t got a criminal soul.”

Nobby: “Well, I always came back with my shield. No problem there.”
Colon: “Nobby, you used to come back with your shield, everyone else’s shield, a sack of teeth and fifteen pairs of still-warm boots. On a cart.”
Nobby: “We-ell, no point going to war unless you’re on the winning side.”
Colon: “Nobby, you were always on the winning side, the reason bein’, you used to lurk aroun’ the edges to see who was winning and then pull the right uniform off some poor dead sod. I used to hear where the generals kept an eye on what you were wearin’ so they’d know how the battle was going.”
Nobby: “Lots of soldiers have served in lots of regiments.”
Colon: “Right, what you say is true. Only not usually during the same battle.” 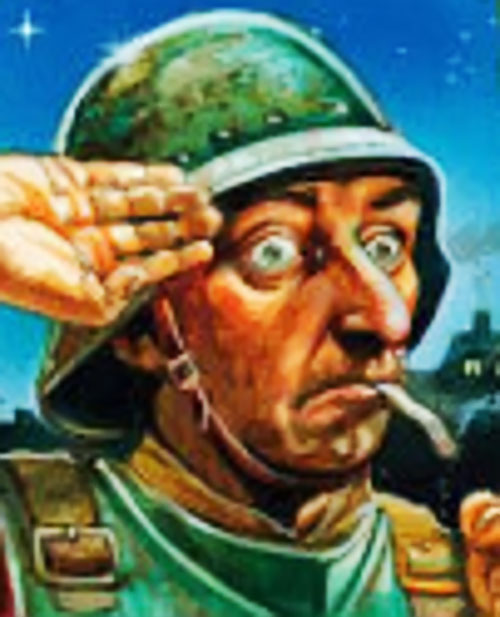 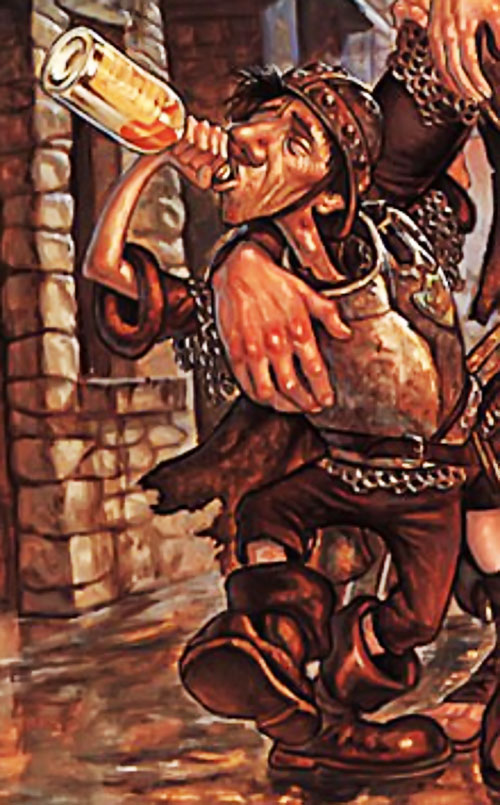