This “base camp” article is primarily intended to avoid repeating basic information in the individual profiles. For a more detailed exploration of the setting, you’ll want the Nocturnals: The legend artbook, and the Nocturnals RPG supplements for Mutants & Masterminds.

Our Nocturnals articles do not *quite* have S P O I L E R S about the storylines themselves. But everything else gets discussed.

The titular Nocturnals are a team of inhuman vigilantes. They are led by Nicodemus “Doc” Horror, a two-fisted scientist. The Nocturnals deal with Things Man Was Not Meant To Know , unacceptably disruptive crime, callous conspiracies, exceedingly predatory undead factions, and other shadowy threats.

Their genre mostly arcs back to the 1930s pulps litterature. These cheap novels were are important stage in the evolution of American genre stories. They played an important role in such genres as :

Among the pulps influences in Nocturnals, the reader can recognise :

As can be inferred from the title, most stories take place during the night.

Post-1940s tech is played down. While it probably exists, the characters aren’t normally seen with smartphones, laptops or the like. Interestingly, we once see a gaming console – though the controller is a 1990s one, the television has 1950s styling. We also see a cell phone in a 2017 story, but it’s a 1980s plastic brick.

Likewise all the cultural references are older ones, and tend to be vintage horror movies and fantasy books. The most recent I noticed was Racoon joking by riffing on the 1968 Night of the Living Dead movie . Even little Eve’s favourite books are from the 1930s. Though there’s also one reference to video game tropes that prolly doesn’t make sense before the 1990s.

They also have a relationship with hybrid criminal the Raccoon.

Most stories also take place in Pacific City. It is in the Pacific Northwest, in Northern California near Oregon. It is a small coastal city among the beautiful woodland of this region.

Pacific City (or “P-City” to the locals) is described as a “gray zone”. That it, it is the sort of unimportant, sleepy place nobody ever pays attention to. At best they’ll stop there for a quick bite during a long coastal drive, and soon forget about it. Pacific City has but limited interactions with the rest of the world. No highway leads to it.

This also means that it can exist in practically any setting from the XIXth to the XXIst century. Or further, given its unchanging small town vibe. It could trivially be moved up North in Washington (somewhere on the Southern parts of Route 9).

It would even take very little for it to be found in Southern Italy, or along the Southern Brazilian (or Northern Argentine) coast. Or it could actually slide between a set of dimensions , rotating every few months.

There’s some Jeanne Added on as I’m writing this. And it’s a pretty good tonal fit, actually.

In some ways, the world of the Nocturnals has power dynamics resembling an heroic-fantasy world. The action takes place in the shadows and off the beaten track, so there isn’t a clean rule of law and central power. It’s more akin to fiefdoms.

During the late 1800s, a rail baron named Villard was the big man in the Pacific City area. He gradually went mad as he investigated weird science and the occult. Villard’s name is forgotten now, but his long-since-abandoned facilities were taken over by Doc Horror and his Nocturnals.

An early player in the stories is the Narn K corporation, a division of the Halcyon Corporation. These have a major lab in Pacific City. The K’s main asset is their weird science, allowing them to :

Narn K has extensive government and mob contacts to go with their vast wealth. Thus, they can do pretty much what they want. Its board is run by one Dr. Lamia Fletcher.

Narn-K appears to have been destroyed, and Fletcher and her board slain. But their assets had to go somewhere, and they may have had competitors.

Organised crime is strong in Pacific City, and perhaps elsewhere. It seems possible that mobs had pulp-novel-like masterminds running them, whereas the police didn’t.

P-City is known to be a special case. One of the biggest crime lords from the Prohibition era, Ferro Zampa, took control of it. It became known as a safe haven for mobsters, as long as they toed the line drawn by Don Zampa.

In P-City, the mob also had preferential access to Narn K’s resources, such as synthetic gunmen and dog-based hybrid guards. However that may have been unique – a result of Narn-K’s agents going to extra lengths against Doc Horror.

The law enforcement is generally out of their depth, and they know it. The mobs are more moneyed and better-connected. In Pacific City, the police is almost cosmetic.

Part of the issue is that the vast majority of people live in denial about their world’s actual nature, and what goes on during the night. That includes many cops. And if they were to insist about the existence of supernatural threats, they’d run into strong hostility. Up to and including institutionalisation.

However, when the problem is just too visible — such as a zombie plague — action will be reluctantly taken. For instance, the state police once came to Pacific City to help exterminate said zombies. Then people will go back to pretending it’s over and will never happen again.

This denial might have seemed forced back when Nocturnals started. Like a watered-down version of Delirium in the Werewolf: The Apocalypse 1992 RPG. But climate change issues now provide an example for this dynamic. 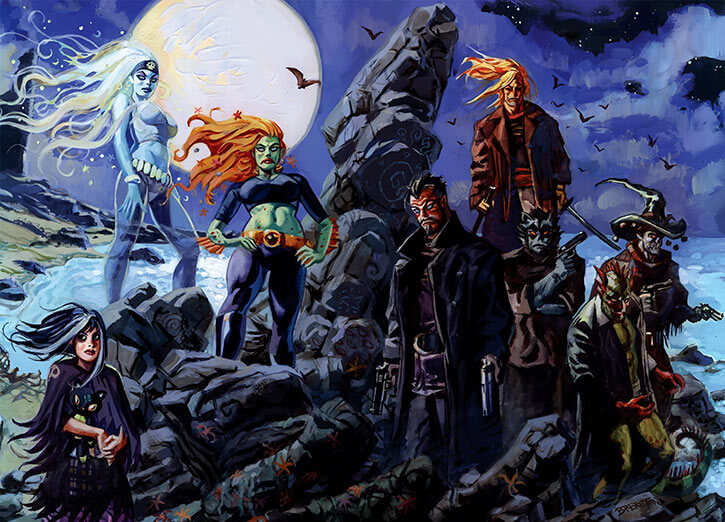 The Crim are a malign race with lots of tentacles, and magical powers. Their youngs, who look like deformed red squids, can attach themselves to bodies and take over.

The Crim are from Doc Horror’s homeworld, the Black Planet. They warred against Horror’s species for thousands of years, won, and pursued him to Earth.

Their usual technique is to have a small number of agents take over key government officials – like the Aetherials in Grim Dawn.

Adult Crim are difficult to kill. But Doc Horror came up with weapons who could do so. Back on the Black Planet, he made a weird science raygun pistol. Later on he built gateway bullets for Earth handguns.

Crim presence on Earth was modest. It was led by Fane, a former colleague of Doc who had sided with the Crim. On Earth, he worked with Narn-K. Fane, and the Crim youths and agents he had taken along with him, were eventually destroyed.

Vampire clans have their own territories, and usually are the stay-at-home sort. They are ruled by a government called the Nation of the Bloodless, who hates it when there’s trouble. The Nation will eliminate unruly clans.

The vampires find their roots in Ancient Egypt – apparently with Queen Nitocris, of the Sixth Dynasty .

There is a *lot* of vampire clans out there. Thousands, with presence in every major city.

Going off the beaten path might lead to running into fairy-tale-style monsters. Such as wicked witches, or bridge trolls.

How frequent these creatures are is unclear. Apparently, the presence of Evening Horror acts as a beacon, which means supernatural encounters are far more likely in her vicinity.

Furthermore, the P-City area was long dominated by a trio of undying witches, though only one of the three sisters is still around. Their children account for a good part of the non-human population.

There’s also a fair few lost civilisations. A species of piscine or amphibian humanoids predated mankind, but they and their secrets are now thought extinct.

One of their megastructure, near Pacific City, was hijacked after their extinction but crayfish-like humanoids. These Skerrl creatures used necromancy to prolong their existence, but they were destroyed by the Nocturnals.

Not all supernaturals are malign, of course. For instance the bridge troll was nice enough. Eve attended a secret boarding school for a while, run by a vampire headmistress. And there also was at least one coven of witches working to keep infernal creatures away from Earth. These coordinated with Doc Horror. 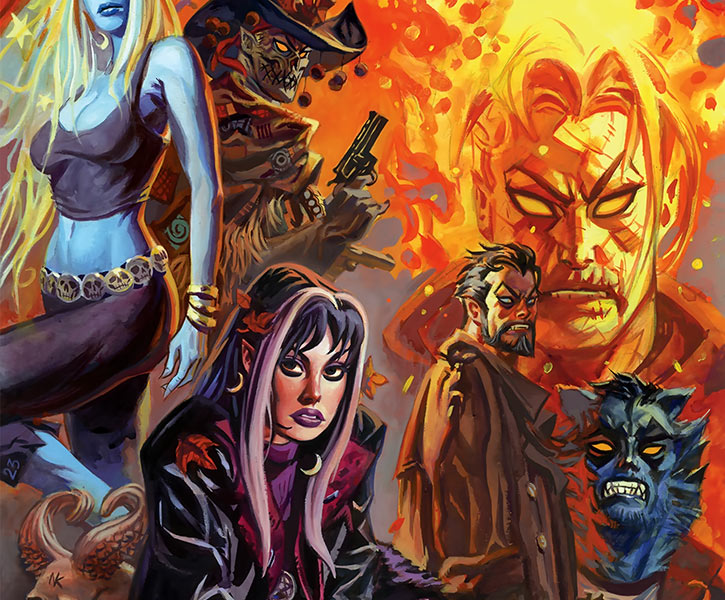 The Nocturnals are markedly superior to run-of-the-mill ghosts ‘n’ ghoulies, or ordinary criminals. But the power level of such opponents seems modest. Most vampires and goblins do not seem to have genuine combat training, though they sure seem confident when bullying and predating upon helpless ordinary people.

When running into something more akin to a super-team, such as the Hideous League or Rictus’ Murder crew, the Nocturnals seemed slightly outgunned. In particular, the Murder would have likely killed several Nocturnals under less favourable circumstances.

Therefore, the individual writeups go for a cinematic action hero level for the combat experts, such as Firelion or Starfish. Plus powers, but the levels for these seem closer to pulpish than super-heroic.

There’s a blink-and-you’ll-miss-it mention that Gunwitch carries a tracker, which is capable of emitting a distress signal.

Presumably all Nocturnals were given one by Doc. With the likely exception of Polychrome, who’s not routinely material.