Nocturne inherited formidable acrobatic skill from her father, and is a highly trained hand-to-hand combatant. She can open small apertures to the dimension her father uses as a medium for his teleportations, from which come blasts of energy. While she refers to those as “hex bolts” in homage to her mother, they are not mystical in origin.

Nocturne might have wall-crawling or night-blending abilities from her father, or occult training from her mother, but these were not demonstrated during the observed run.

Nocturne can also “jump” into another person’s body, taking possession of them. Her own body disappears inside the target’s body for the duration. Those possessions can last for a long, long time (reportedly a lunar cycle). Neither Nocturne’s nor the target’s mind can be probed or read during a possession.

After possession, the subject stays unconscious for 12 hours. Even Wolverine’s powers did nothing to lessen that duration.

The dialogue regarding the maximum length of her possession ability is unclear, so the lunar cycle maximum duration is debatable. It also has some unclear limitations, as she doesn’t use it often and usually on persons who have been knocked out beforehand.

Nocturne is an X-Woman from an alternate timeline. In her world, Professor X retired and let Wolverine and Nightcrawler become the leaders of the X-Men.

Talia was the daughter of Nightcrawler and his wife and team-mate the Scarlet Witch, and was intensively trained to become a capable super-hero. She became a member of the large set of X-Men teams, comprising both hardened veterans and highly trained second generation mutant heroes such as herself.

However, something reportedly went wrong with a part of the timestream. Information started to propagate, that would erase some anomalies but also some timelines. Furthermore, it would triggers retcons  in numerous realities.

Thus, in Nocturne’s timeline, Nightcrawler would retroactively be killed during an early fight with the Hellfire Club by his own mother, Mystique. Nocturne would thus be erased from the multiverse, since that world made her birth impossible.

Nocturne was recruited into a small group of youths from threatened timelines, assembled by a halfling-like being called the Time Broker. The Broker said that he could send them to alternate timelines to rectify anomalies, thus making sure the retcons never propagate to wreck their lives.

The youths agreed to the deal, and started dimension-hopping as the EXiles – accomplishing sometimes cryptic missions on numerous alternate Earths.

Some of those missions were especially hard on Nocturne. Once they had to kill Jean Grey, who in that reality had truly become the Dark Phoenix during the fight with the Imperial Guard and was going to consume the galaxy. ”Aunt Jean” had been one of the main persons who helped raise young T.J.

Nocturne fell in love with John Proudstar, the eXile known as T-Bird. In her native reality she had been the lover of her dimension John’s Proudstar’s brother, James. They kept their romance a secret, but T.J. eventually got pregnant.

During a particularly harrowing adventure, John Proudstar was left in a coma, possibly brain-dead. The shattered Nocturne was forcibly teleported from him when they were sent on a new mission. Nocturne later lost the baby – presumably she had her pregnancy aborted following the loss of John.

Nocturne left the Exiles during a mission on Earth-616, where she traded places with Beak. She had intended to join the X-Men to be with the 616 version of her father, but instead took an opportunity to infiltrate the latest Brotherhood of Mutants established by Black Tom Cassidy.

After a series of misadventures that dragged her through Mojoworld, Nocturne rejoined the X-Men and is currently serving with the latest iteration of the mutant team Excalibur.

T.J. often wears light outfits showing a lot of blue skin. She’s also partial to wearing plain bandannas and will nearly always keep her feet bare. Her way of moving is quite reminiscent of her father’s, including constant acrobatics and gargoyle-like poses, but she stands upright more often than Nightcrawler does.

Nocturne has a tail much like her father’s, though hers is retractable. Whether it is prehensile is unknown, but it’s certainly useful for balance when she performs acrobatics.

Nocturne is a carefree, well-adjusted young woman in her 20s. She is free, lighthearted, very open, and energetic. Some of this energy is used for the X-Men, some for her private life, some for her rock band, the Butt Monkeys.

Underneath her amusing dialogue and combat skills, however, she has a big heart – she’s as much a lover as a fighter. She tends to feels very strongly about the people she loves (she loved the headstrong James Proudstar very much despite fighting with him all the time), and the loss of family, friends or lovers is devastating for her.

“Relax. I rarely ambush people in my underwear.”

“You are a *rock star* ! A massive, hundred thousand seat coliseum, heavyweight fucking rock star ! You knocked out the *Hulk* !”

Put Nocturne in L.E.G.I.O.N. She is a good fit with the early group, and it has a nifty symmetry with Kurt being originally designed for the Legion of Super-Heroes.

Advantages:
Misc.: Nocturne is immune to the detrimental effects of being a passenger of Nightcrawler’s teleportations (1 pt).

The stats assume that almost none of the persons encountered in alternate realities had significant HP totals. 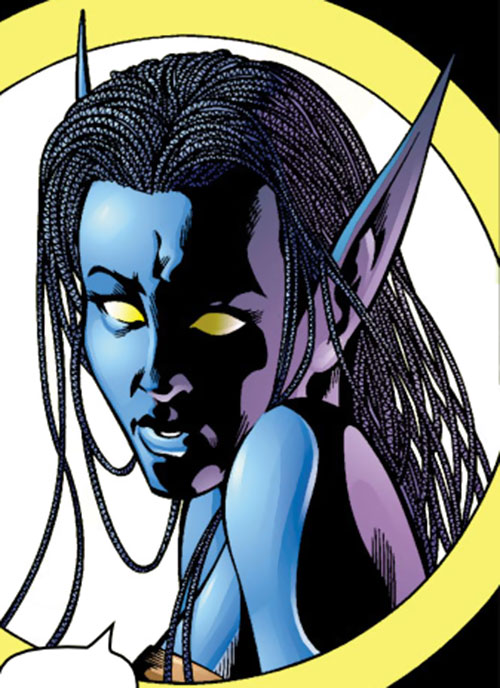 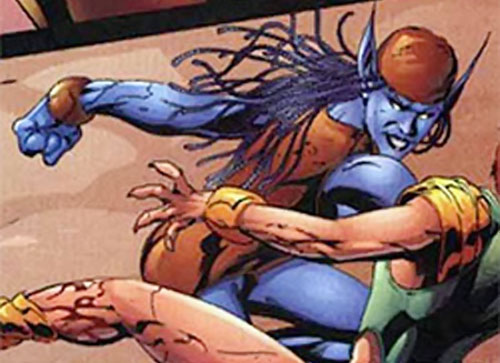 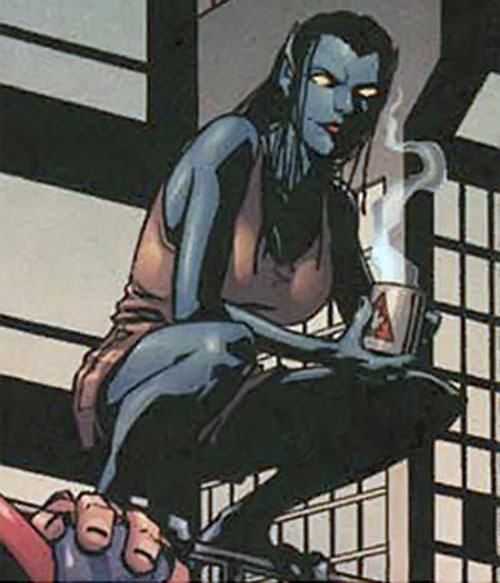 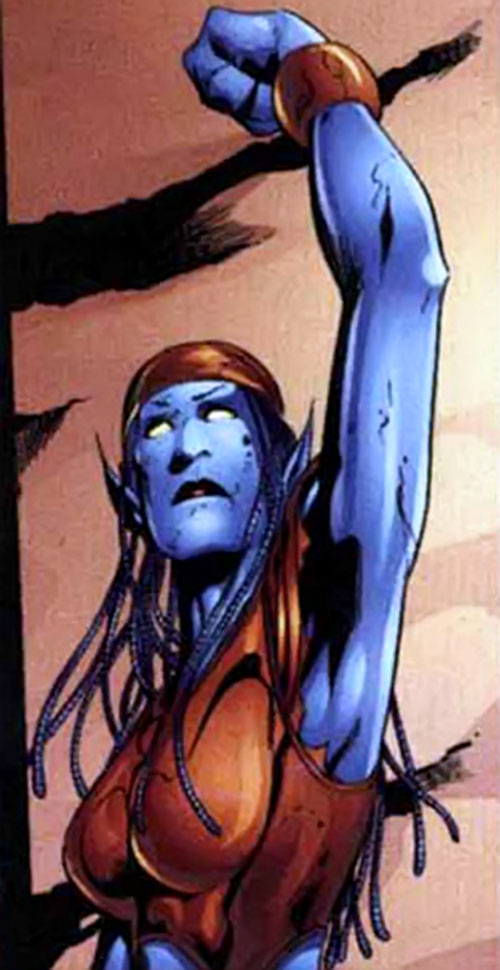