Nocturne has enhanced strength and speed. She is highly aggressive in combat and this, combined with how fast she moves, even allows her to slash very difficult targets such as Spider-Man. Her nails have mutated into very sharp claws, and she has bat-like wings allowing her to fly at considerable speeds.

Her hair, though normal-looking, is prehensile, much like Medusa of the Inhuman’s (though it is shorter). She has demonstrated the ability to handle two objects (people, actually) at once with just her hair. Nocturne can easily lift and/or strangle an adult male with her locks.

She also seems to have some minor regenerative abilities, but this may have been an artistic mistake.

Nocturne does not seem to be clearly alive or dead, but in any case she has a very powerful presence.

Nocturne also has empathic powers. She can psionically  broadcast her emotions, and can even perform mental attacks as blasts of raw, indistinct emotions stunning her targets.

This ability to shoot mental beams of emotion can also be used to project thoughts. While this is not articulated language and is restricted to a single concept, it can convey complex notions. For instance she emitted a burst at Spider-Man expressing her “Angela Cairn-ness” to “tell” him who she was. 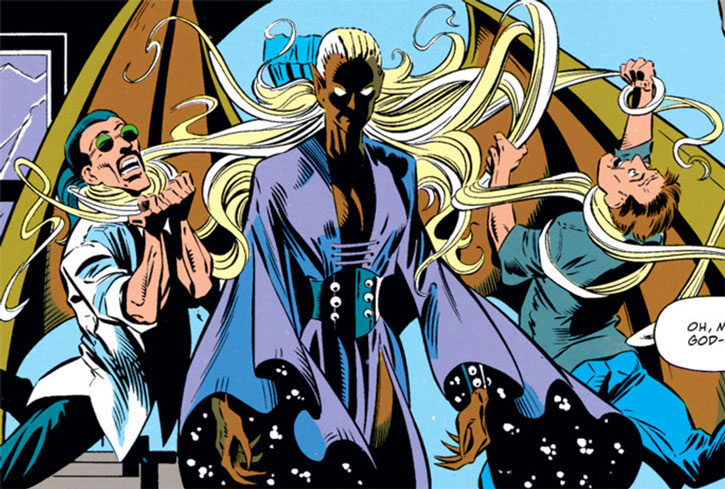 Apparently she can communicate longer if she touches the forehead of the person. She later demonstrated empathic healing capabilities.

Purists can experiment with making her mute again in their campaign and restrain her communication to empathic blasts. It’s easier to do in RPGs than in most media.

Detective Cairn was a NYPD plainclothes officer, with a reputation for being tough as nails. As a woman of complex minority heritage, she was used to being on the business end of a large amount of prejudice. She coped by developing her hardass attitude, by smoking a lot, and through her deep, long friendship with Jackie Kessler, a uniform.

In 1993, Officer Kessler was one of the six NYPD officers killed by the mutate Vermin. This death devastated Angela. While on a leave, she investigated further murders that seemed connected to the band of horrible, bestial mutates Vermin had been running with in the New York City sewers. While her intent was unclear even to herself, she likely thought a melange of closure and vengeance.

However, during this off-duty investigation, she was ambushed and knocked out by an horrible, insane mutate. Like the rest of Vermin’s “friends”, she was the product of terrible experimentation on human subjects by Baron Zemo in a hidden New York City lab.

The deformed thing tortured and experimented on Cairn for hours with Zemo’s discarded machinery, until Cairn died. Disappointed, the mutate dressed her in a ’funeral gown’ from the lab and threw the corpse into the nearest river.

After several days, however, the eerily mutated Cairn emerged from the ocean.

Confused, shocked and going insane, Cairn flew around until she found her apartment. Seeing herself in the mirror but failing to scream as she no longer had a voice, she entered a frenzy and thrashed her apartment before running into Spider-Man. 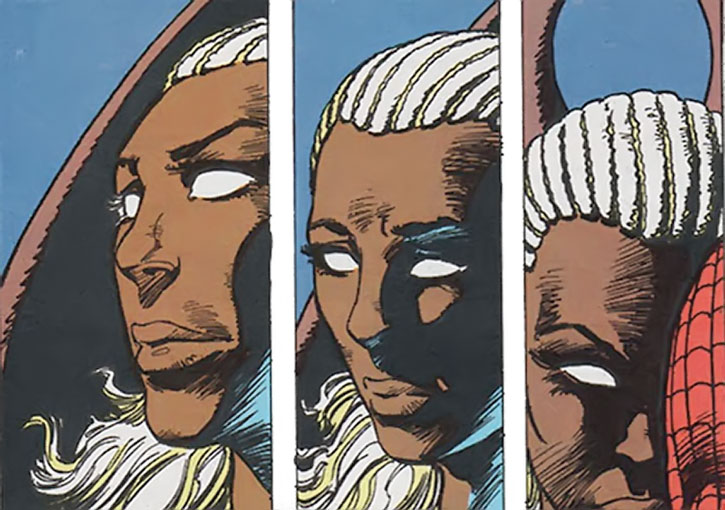 Spidey had been looking for the detective to ask her about the Vermin case. She savagely assaulted him, flying away after wounding him, but he tagged her with a tracer.

Returning to the wrecked Zemo lab, she ran into the mutate who had tortured her and transformed her. Spider-Man intervened before she could kill her tormentor, Spider-Man intervened. The insane mutate failed both to convince Spider-Man that she was the real Cairn (despite her shape-changing powers) and to have Cairn kill her.

I, I live among the creatures of the night

Spider-Man told the police about the lab. He also explained to Cairn that he was hoping that the authorities could use the tech there to revert the mutates’ state. But the former detective decided to instead silently fly away. She was feeling more free as Nocturne, existing outside of society and its expectation, than as Angela Cairn.

Still struggling with her new state and in long-term shock, Nocturne spent several weeks gliding around. She helped victims of random crimes, scaring and beating up muggers and the like. Having no need to eat and seemingly ignoring the cold, she could exist painlessly as a homeless person.

Meanwhile she was declared missing and presumed dead, a likely victim of the mutate at Zemo’s abandoned lab. Unable to face her mother, Angela continued her existence in the shadows, using her emotion blasts as a sort of makeshift Penance Stare (like the Ghost Rider’s) to punish criminals.

Feeling increasingly alone despite her good deeds, Nocturne eventually ran into a severely wounded Puma. He was lying dying in an alley. She healed him, and the largely animalistic Puma decided to stick with her. Together they continued Nocturne’s vigilante activities, terrorising some drug dealers.

The empathic Nocturne later sensed that Spider-Man was experiencing emotional difficulties. She decided to confront him. 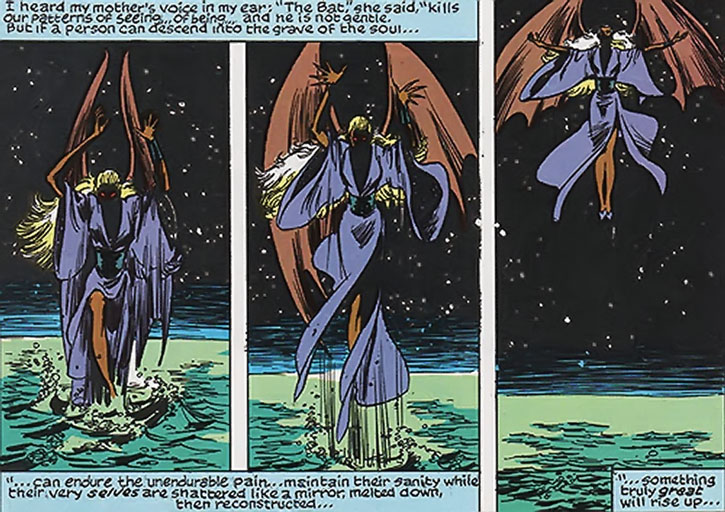 However, as Nocturne (now able to speak to a limited extent) discussed with Spider-Man, Puma savagely attacked the hero, who was tied to his most painful memories. Nocturne was badly wounded by one of the Puma’s blows. The Puma fled, and after Nocturne recovered she convinced Spider-Man to help her track the near-beast down.

This proved sufficient to shock Puma back to his human form and mentality. Nocturne then flew away, again refusing Spider-Man offer to have the Ravencroft doctor who had Zemo’s lab gear to examine her for a possible cure.

Angela has mixed African-American, Cuban and Native American blood. Her aged mother looks Native American, but might also be mixed race. Her mutated eyes are solid white, but seem to reflect light a bit like cat’s eye. But the “backlight” of reflected light at night or in the darkness is clearly red or even blood red.

Spider-Man once commented that her wingspan was about 11 feet.

As a detective with New York’s Finest, Cairn had a reputation as a tough-as-nail, chain-smoking, hard-charging officer. She seemed more concerned with stopping the perps than with their civil rights. Though some assumed she was a Dirty Harry type, she was actually highly dedicated to the ideal she shared with Kessler – that the law was here to defend the powerless and the abused.

She felt a certain empathy for those. Cairn herself had to fight hard and always wear a demanding mask to overcome the prejudice that corseted her entire life.

Kessler is described as Cairn’s partner. Howbeit, she’s a uniform whilst Angela is junior detective. It is not impossible for such a partnership to occur. For instance they could have been on the same task force for months or years (where detached patrol officers and detectives might very well work together long term). Or Cairn might have been assigned to a long-term job matching Kessler’s beat.

From various hints (photos of Kessler in Cairn’s place, Angela’s crushing, feeling of oppression and being too constrained by society, her empathic reaction when two homophobic thugs start beating a young gay man, some references to the closet, etc.), I would assume a stealth double entendre and the partnership being a romantic one.

(This was confirmed 17 years later (!). And thus also well after this profile was written.)

Now mutated as sort of of inhuman (though beautiful) vampire bat creature, Nocturne II is an outcast. She already found it difficult to function in society as a human, but now it’s just too much. She has rejected her Angela Cairn identity, and now only calls herself Nocturne.

She is a New York City homeless person. But of course she doesn’t need to eat, doesn’t feel the weather, has clothes that do not seem to get stained or damaged, and can soar whenever she wants. 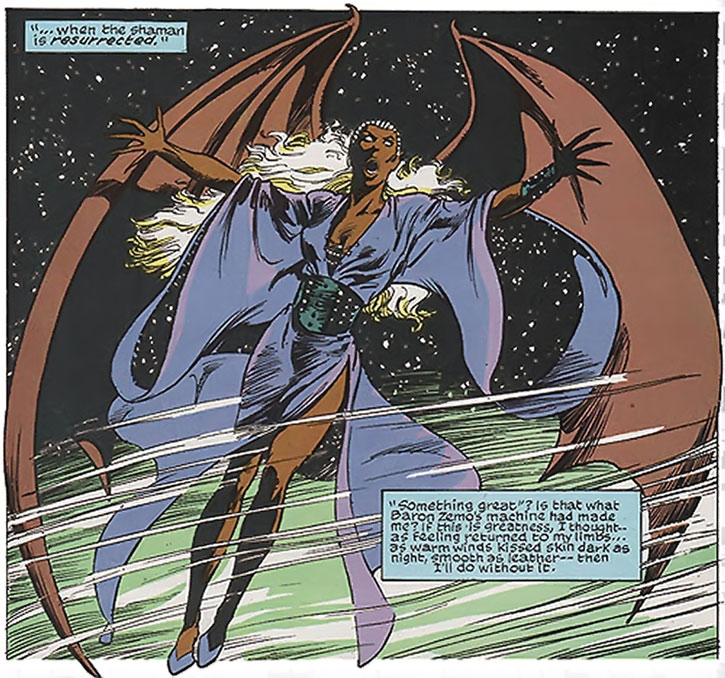 She’s still protecting the defenceless (and in particular various minorities). As a result, there are probably urban legends making the rounds about a giant bat vampire chick with claws.

Nocturne is a silent empath (or a mostly silent one, after she becomes able to talk again). Thus her world is a different one, and she is particularly concerned with strong emotions such as loneliness, distress, despair, etc.. She strongly senses those, and they are her primary way of knowing people, beyond even sight.

Nocturne’s mother taught her about the traditional animal spirits of her unspecified Native American culture. Thus Cairn knows about mythological associations of the spider totem, the bat totem (her own – symbolising painful, destructive ordeal and rebuilding to a greater state), etc..

This belief seem to be accurate in the Marvel Universe, as Spider-Man discovered years later. It is unknown whether Nocturne ever ran into Morlun.

(Caption) “So I screamed a silent scream… and went a little mad.”

(Caption) “You see, the mutate was right : Angela Cairn wasn’t free, she was a prisoner of other people’s images and expectations. She was a butterfly, forced to spend her life in someone’s else cocoon. But now the cocoon had burst, once and for all. Angela was gone – and Nocturne was born. Then I was free. It was time to test that freedom, to taste it… and ride it high above the world.”

She would have gained her powers from a similar mad scientist – Hugo Strange, for example, in Gotham City. She might make an interesting foil to Batgirl.

In the alternative, she might be one of the Hybrid. Or she may be a strange byproduct of exposure to the Man-Bat serum in unusual circumstances.

Bonuses and Limitations:
Thief (Stealth) is also useable when flying.

Advantages:
Familiarity (Unspecified Native American folklore and totem animals ; Classical music ; Classic world literature), Life Support (No Need To Breath, Eat or Drink), Misc.: It is probable that Nocturne is not affected by effects that only affect living beings.

Drawbacks:
Distinct Appearance, SPR (Completely mute ; later becomes a MPR (speech is painful and done with an eerie voice)), Exile (voluntary, from mainstream society). Formerly has a MIA toward Nicotine.

Equipment:
Nocturne’s robe does not seem to be made of normal material, and its inner lining produces a starfield effect. It is likely made of unstable molecules.

There is little reason to assume Angela has lost her police skills as Nocturne, though they might have atrophied for lack of use. See our entry for stock police officers if you want to add those competencies to her character sheet.

The night vision is largely speculative. It is never clearly demonstrated.

Helper(s): Our previous version was written by Doug Barnes, based on Ty States at rivendell.fortunecity.com/battlespire/85/annual3.htm (defunct). Most of the DCU history section is still his. For v2 – Roy Cowan (police lore), Darci. 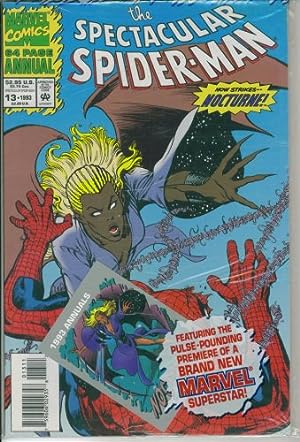 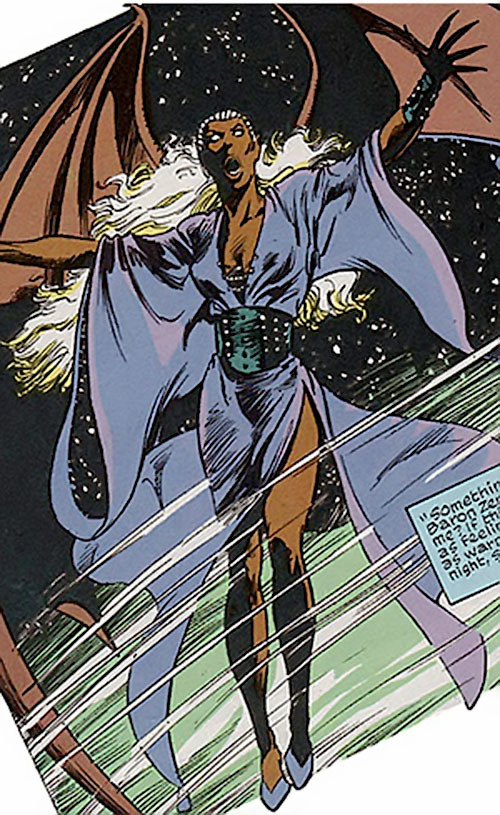 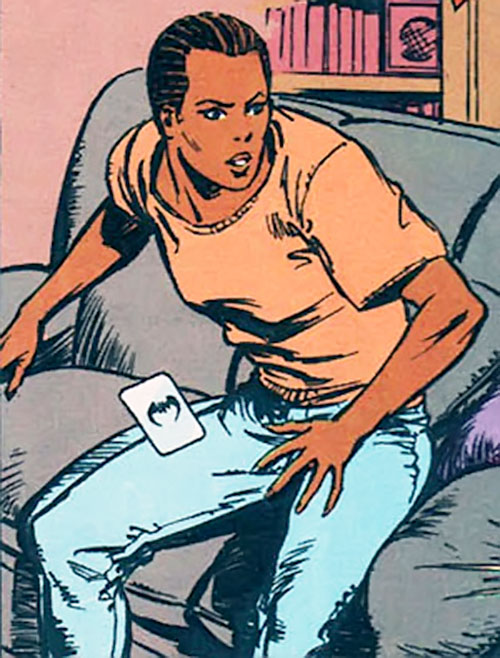