After Night Thrasher (Dwayne Taylor) had kick-started his powers again, Kid Nova only had a portion of his former Nova powers. He was reduced to a flying brick , meaning :

After being imbued with The Nova Force again and being promoted to First Centurion Prime, he got back his former powers (FTL  flight, Nova Corps’ suit). He also learned to project gravitational blasts.

Back to normal life

Richard Rider gave up his Nova powers to be allowed to get back to Earth. Once there, his life took a depressing turn. His former friends all graduated high school and moved to college. But since he had dropped out of school to be Nova, he couldn’t keep up with them.

Lacking a qualification, he took odd jobs to make ends meet. When Night Thrasher abducted him, he was flipping burgers at the local McDonald.

Founding member of The New Warriors

For details of his adventures among The New Warriors, please see the team’s profiles, starting with New Warriors (year one).

Nova, being a short tempered hothead, had numerous issues with Night Thrasher’s leadership. As a token of good will, Dwayne Taylor offered Richard a revamped version of his former Nova suit. It was not as powerful, though. Yet it made Richard confident enough to loose the “Kid” from his “Kid Nova” alias, to be Nova again.

The “Poison Memories” story arc directly involved Rider’s family. Therefore his parents, although proud of what he was doing as Nova, gently kicked him out of their home.

For some time afterward, Richards crashed at The New Warriors’ headquarters.

His brother Robert still expressed his support to Richard’s heroic deeds, even though he had been maimed by gangbangers.

After their encounter, Supernova (Garthan Saal) left Richard dead. Air Walker resuscitated him, but without his Nova powers. Saal had stolen all of it.

A depowered Richard Rider nevertheless accompanied The New Warriors. With the help of Air Walker and Firelord, he bravely fought Supernova. In the end, Richard was imbued with all the Nova Force in the universe. It nearly drove him mad.

Richard spent the Force to revive Xandar’s World-Mind. This allowed the mega-computer to launch its cloning facilities and repopulate the dead planet.

Adora, Xandar’s queen, gave back his Nova powers to Richard as recognition for his deeds. She then promoted him as Prime Centurion of The Nova Corps, Protector of Terra. Rider also got his full Nova suit back.

Richard then went back to his life on Earth. He caught up with his high school friends. They moved in together as room-mates. His brother further convinced Richard to found the Nova Express Delivery Service. 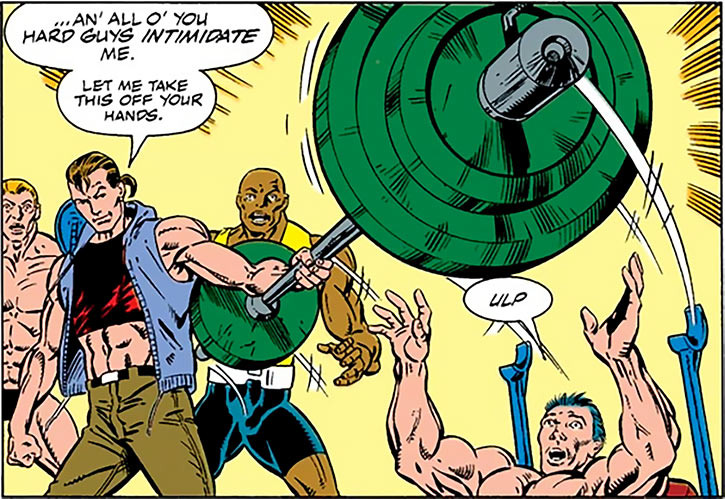 Meanwhile, Xandar fell under the heel of the Shi’ar Empire. The Shi’ar dispatched a commando, backed up by Gladiator, to put Nova to the test. They wanted to ascertain whether he was up to the task of Protector of Terra.

He had to deal with Laura’s room-mate, who was a Punisher-wannabe, rapists-killing vigilante calling herself Tailhook. In the end, Laura protected her friend: she jumped from the roof of a building, forcing Nova to save her instead of preventing Tailhook’s suicide.

When the Death Storm happened on Earth-616 , Richard deflected it.

While defeating the Death Storm, Nova had to ignore Adora’s call to arms against Kraa. She thus dispatched Garthan Saal to bring him back so he could face trial. After a short fight, Nova complied. Under Shi’ar pressure, Adora demoted him and removed his Nova powers. She appointed Garthan Saal as Protector of Terra, which Richard took as an insult.

During Richard’s journey back to Earth, Volx, the Dire Wraiths queen, impersonated a Xandarian pilot and crash landed the starship on Earth. Garthan Saal went after her. Depressed, Richard desperately tried Night Thrasher’s trick to get back his powers. He jumped from a building. Turbo (Michiko Musashi) barely caught him before he fatally hit the ground.

Depowered and frustrated, Richard pressed Hindsight to find where Undertow held Namorita. He insisted on going with The New Warriors when they attempted a rescue mission. But this initiative failed.

A brave depowered Richard also went with them to defeat Volx. During the battle, Garthan Saal died of his wounds. Saal again surrendered the Nova powers back to Richard, whom he deemed worthy.

Nova struggled to stay in the super-heroes business. Every time he went after a rampaging villain, another, more popular super-hero, interfered and got all the credit. 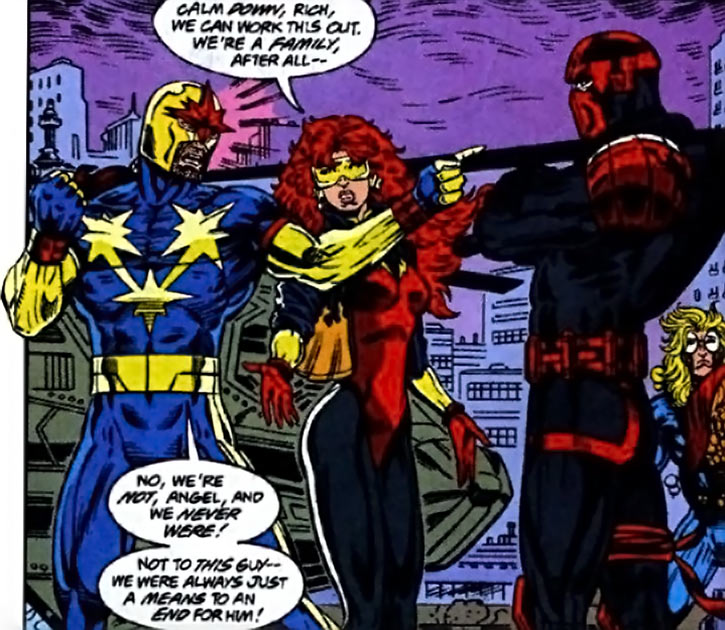 He kept up with his high school gang, still his room-mates. When Namorita experienced her latest gruesome physical transformation, he turned his back on her. She repaid him by having sex with one of his room-mate, just under his nose (so to speak). Namorita never forgave Richard for abandoning her.

He got closer to his former high school flame, Ginger Jaye, now married to an abusive husband. When she called for help during one of her husband’s tantrum, Richard nearly killed the man. Now, Ginger was pregnant with her husband, and she had so mixed feelings about her former boyfriend nearly killing her abuser.

The unfortunate Ms. Jaye ended up in the street, as she had to sell her house to pay for her crippled husband’s medical bills. Richard’s parents took her and her baby in their house.

Nova agreed to join Speedball’s new New Warriors, out of pity for his old friend. It didn’t last long. For the last issues of both New Warriors volume 2 and Nova volume 3, the writers did some kind of meta writing involving Marvel Comics’ editorial crew and Hollywood producers.

Nova took part in the Reality TV Circus version of The New Warriors, in the book’s third run.

Nova left the New Warriors well before the Stamford explosion. See Speedball’s writeup for details about this disaster.

Instead, Richard went into space to fight The Annihilation War .

Richard Rider is a fit young man in his early 20s. He wears his hair in a pony tail. He likes to keep a 2-day stubble, and has a ring on his left ear. He dresses in 1990s streetwear, usually with a cap turned backward.

Kid Nova wears a sleeveless brown leather-like jacket, exposing his arms. He has pants of the same fabric with a large golden stripe on the side of each leg. He has a golden girdle and golden boots. He wears large, leather-looking wristbands. He has his emblematic golden helmet with a red star on the forefront and nose (earning him the “Bucket Head” nickname).

With Taylor’s help, he reverts to his former blue and gold Nova suit. 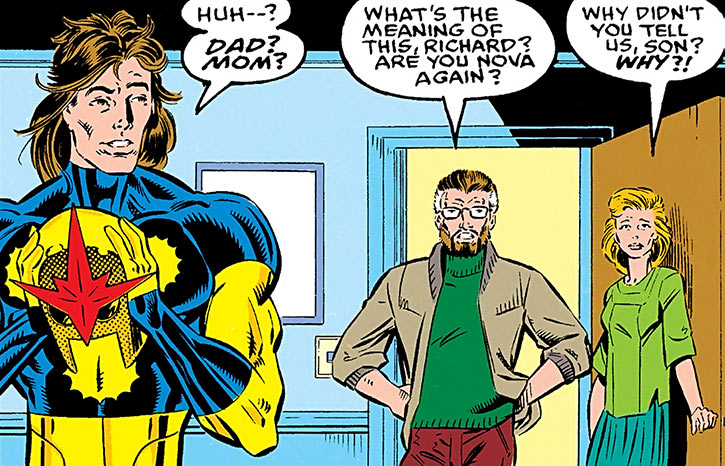 He has not much empathy for others and tends to be self-centered. His invulnerability and strength makes him arrogant. He speaks in abrasive ways, bordering on insulting people, and sometimes indulges racist clichés. The more powerful he gets the more prone to use physical intimidation he is (though he never lays a hand on regular people).

His team spirit also fluctuates with his power level. At first, with only a portion of his Nova powers, he barely acknowledged Night Thrasher’s leadership, but he went well along the others.

Then, at his full Prime Centurion’s power, he was more fighting solo than in team. Usually, Richard fought the heavy hitters solo, like Namor or The Sphinx. He would keep them busy, while the rest of the team found the weakness to finish the job.

He has a macho attitude towards women. He’s easily distracted by good looking lasses. We can speculate he has a rather low opinion of them (particularly good looking ones), until he can see what they’re capable of.

And then he can’t help but being over-familiar (bordering on contemptuous) with them. He often use provocative language towards them, like calling them “babe” even if he doesn’t know them.

He’s very protective of his friends and family. When their safety gets threatened, he drops all the attitude and trash talk to get straight to business, and in no subtle way.

Richard Rider’s romantic life is like a constant love triangle. A trait that emphasizes his lack of respect towards women.

Early in The New Warriors series, he developed a crush on Namorita. They actually made out much later. At the same time, he started a lasting relationship with Laura Dunham. But his love for Namorita was deep… until she experienced her most gruesome physical transformation. Then, he was jealous of her public relationship with The Human Torch.

Afterward, it was Laura and Ginger (though he never actually made out with Ginger, he was in spirit). Then it was Ginger and one Jennifer Smith.

(Taking Terrax from Namorita’s hands during their first encounter)
“Look out babe !”

(As Tai got in his flight path)
“Hey ! Get Confucius out of here !” (incidentally Tai is Cambodian, not Chinese)

(To Namorita, while waiting for The Mad Thinker to appear)
Nova: “Hey, legs ! Don’t tell me you went to all this trouble to set up a romantic rendez-vous ?! I’m touched.”
Namorita: “In the head”.

“Get me some Kleenex, I’m crying up a storm.”

(About Speedball, worrying for his missing mother)
“The pipsqueak’s got problems ? Try Oxy-10  !”

(To Night Thrasher)
“I’m sick of jumpin’ when you say frog ! You can’t tell us what we can or can’t do.”

“Then again, when you fly like a human rocket, ‘late’ ain’t part of your vocabulary”.

(To a TV reporter)
“How do you think it makes me feel, you freakin’ leech ?! They’re my friends.”

(To Cardinal after Undertow captured The New Warriors)
“No time for your smart mouth, merc.”

(Mad after Night Thrasher for not being there against Undertow)
Firestar: “Calm down, Rich, we can work this out. We’re a family, after all.”
Nova: “No, we’re not Angel, and we never were ! Not to this guy… We were always just a mean to an end for him ! An arsenal of weapons he could hone…”

Bonuses and Limitations:
Mental blast has No AV (-1 or 0). 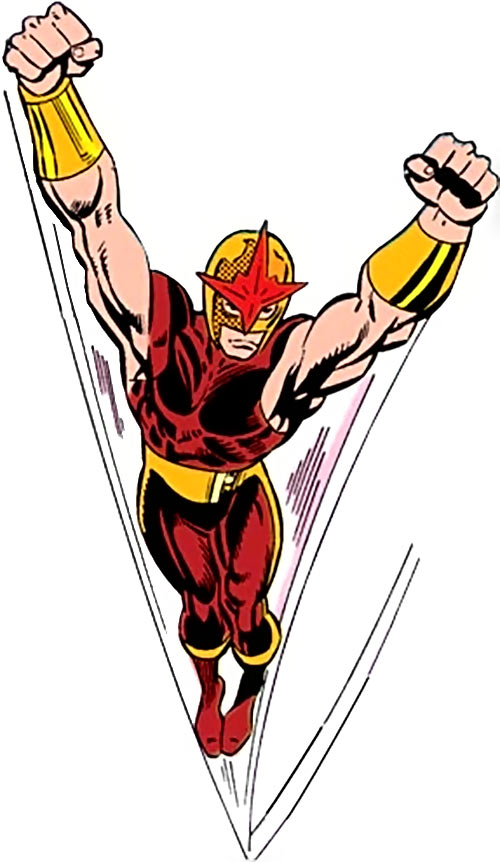 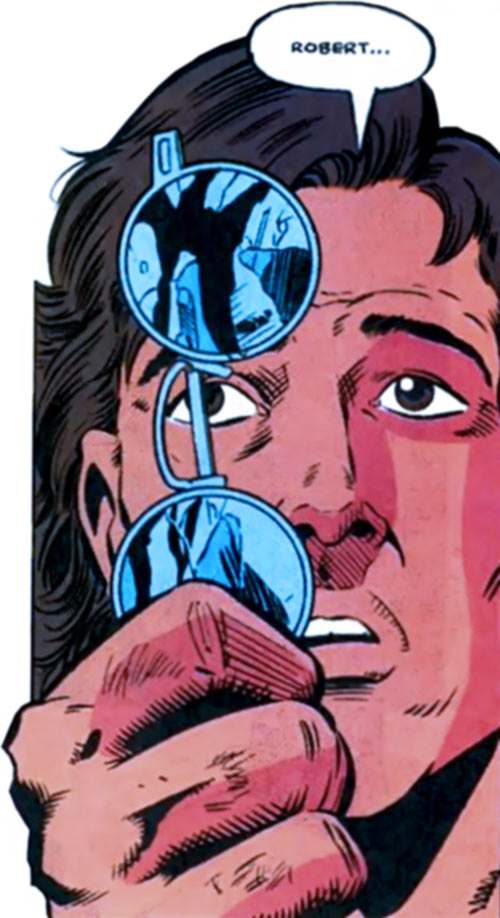 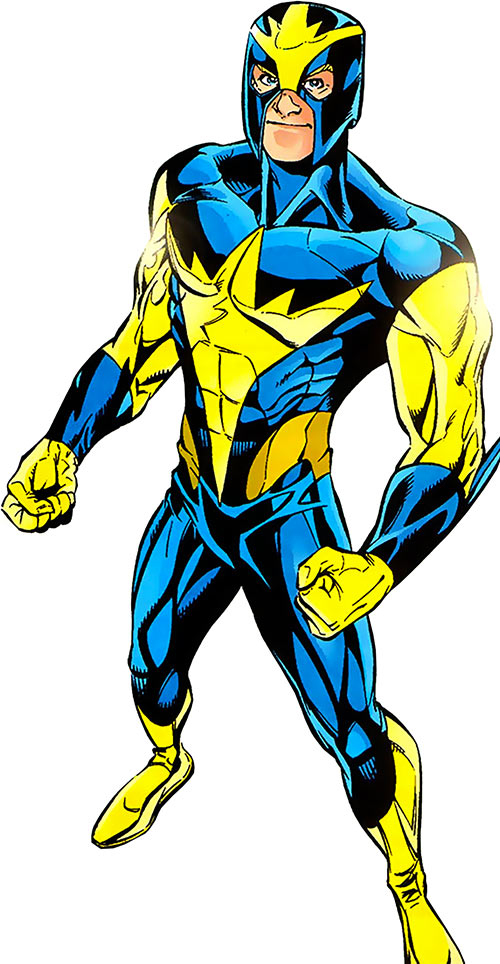 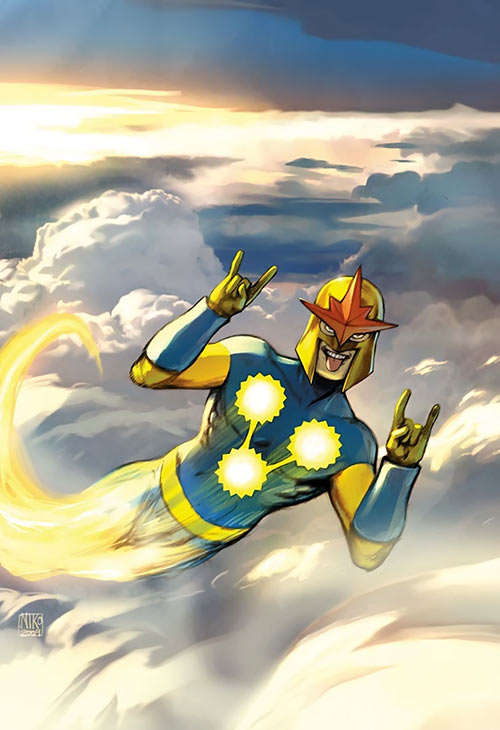 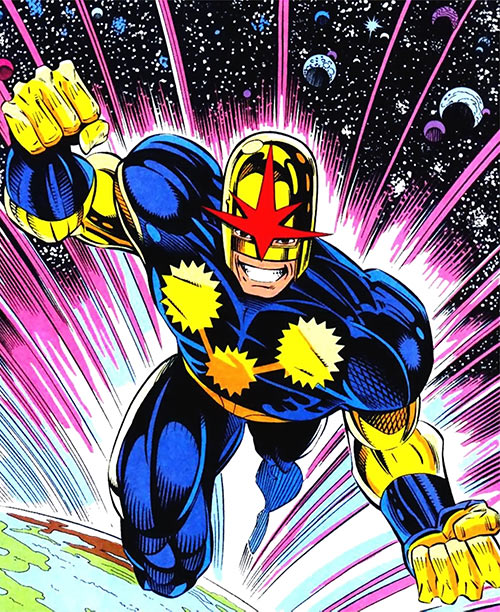 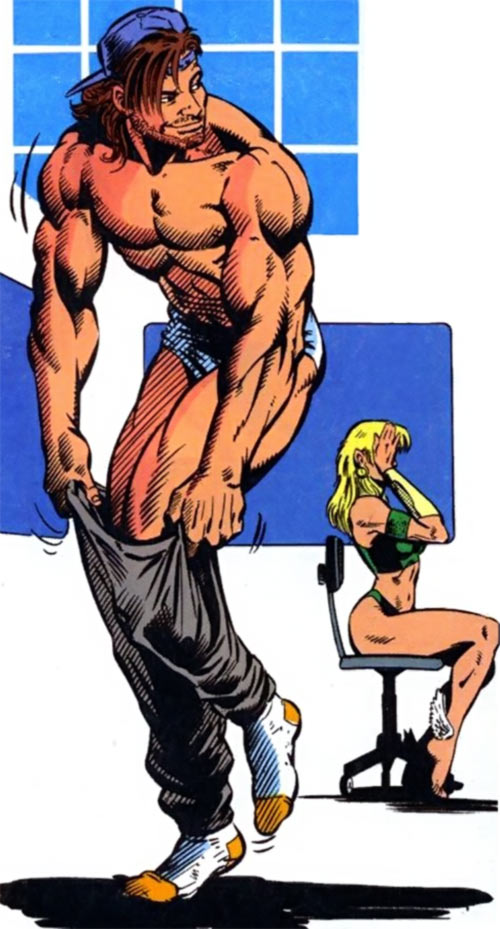 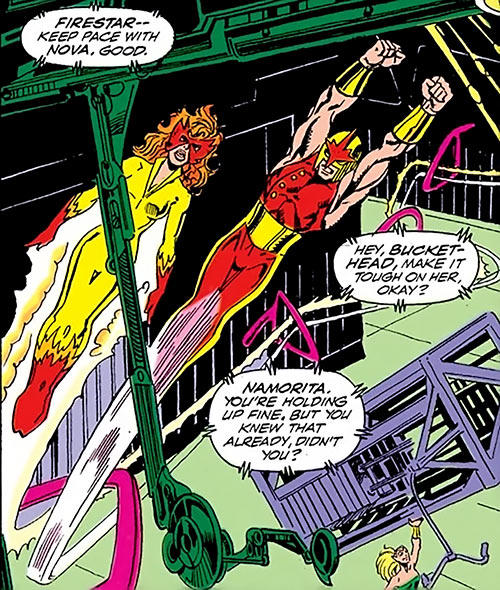 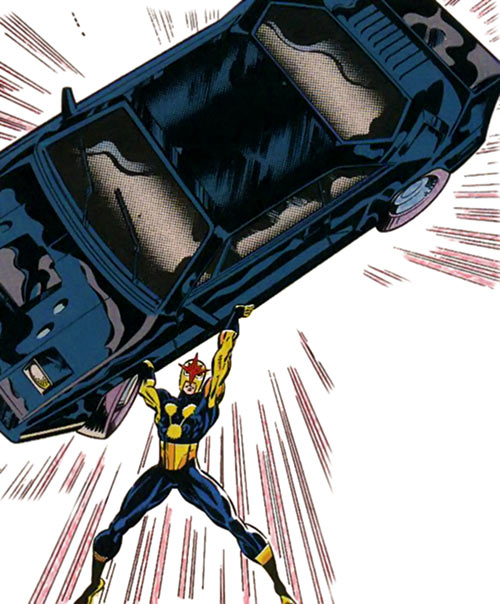