These odd antagonists from DC Comics were first seen in publication in 1985/86.

They’ve only returned once.

It’s a pun about two things

The Family symbolised the fears of annihilation by nuclear war.

These had flared up again during the 1980s. For people living near targets (major cities, military bases, most of Germany…), death by nuke seemed likely.

The Family also corresponded to a model for the ideal family that emerged in the US after World War II.

It was the “nuclear” family (that is, based on a nucleus — a core — of two straight parents) model. Which was different from the more complicated family organisations of previous decades.

The stock example of this view of family is the Leave it to Beaver TV series (1957-1963). That’s the archetype these characters refer to.

The Family are lifelike robots. They seem to be living beings unless damaged. Or medically inspected – simply checking for a pulse will do.

They have superhuman durability, and a level of superhuman strength (possibly “Class 5”).

They can also fly, and absorb and store vast amounts of nuclear radiation.

Each Family robot also has an individual power, representing the successive stages of a nuclear bomb blast :

Once they have absorbed as much hard radiation as they can, the Nuclear Family can join hands and focus for about a minute. Once this procedure is over, they’ll detonate. The magnitude of this nuclear blast is unrevealed. 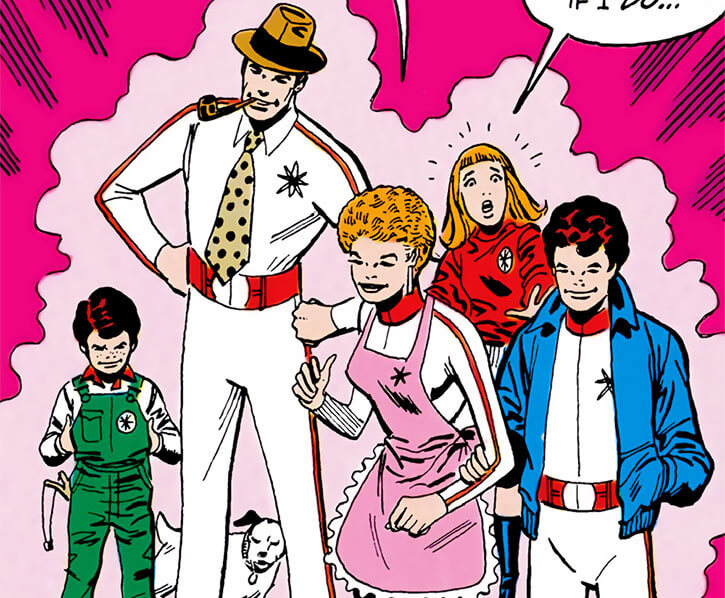 Nuclear physicist Dr. Eric Shanner was severely irradiated as an accidental consequence of his work.

This likely was during the 1940s — perhaps with the Manhattan Project  — when many medical aspects of exposure were ill-understood.

Shanner narrowly survived. But he was now disfigured, disabled and severely sick. His family — a wife and three children — did not survive.

Dr. Shanner became an activist. He wrote books (such as Nuclear Roulette) and gave speeches about the danger of nuclear warfare.

All in the family

Lack of results drove him first to despair, then to consider the Ozymandias (Adrian Veidt) option.

Instead of bioengineering a giant psychic squid to fake an alien invasion, Shanner built combat robots. These were replicas of himself and his family back during the early 1950s, albeit with retro sci-fi jumpsuits.

This so-called Nuclear Family could absorb energy from a large nuclear reactor. Then cooperate to turn it into a multi-megaton nuclear blast.

Shanner’s desperate hope was that such a detonation in downtown Los Angeles would convince mankind to disarm. 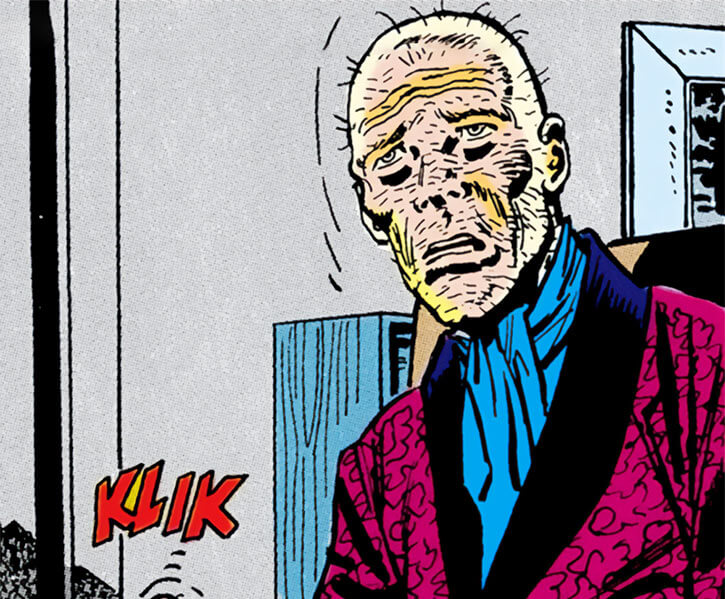 Shanner had been working with a young and severely unethical psychology researcher, Professor Wye.

Wye wanted to conduct a fake terrorist attack on a nuclear plant in Los Angeles. The goal was to record the reactions of nearby crowds, thinking they were about to be vaporised by the exploding reactor.

This fake terror strike took place under Wye’s command. But it was stealthily foiled by the Outsiders.

Unbeknownst to Wye, the false attack also served as a diversion away from Shanner’s Nuclear Family robots. These breached the reactor, and absorbed huge amounts of radiation.

When the Outsiders came in, the robots were taken down. A small flaw made them vulnerable to Halo (Gabrielle Doe)’s green aura.

To trace their source, the Outsiders reactivated the robots – all but Mom. Disguised as Mom, Looker (Lia Briggs) located their hideout, and learned of Wye and Shanner’s plans.

At this point, Dr. Shanner revealed that his endgame was to nuke Los Angeles. Briggs gasped. This revealed her as an impostor, and she was blasted unconscious.

Meanwhile, Wye fled in a desperate attempt to drive out of the blast and fallout zone.

The Outsiders intercepted the Nuclear Family at Esperanza Canyon. However, they were beaten back, and the Family prepared its detonation.

At the last second, Metamorpho (Rex Mason) was airdropped in and entirely turned into TNT. The blast destroyed the robots before they could finalise their nuclear buildup.

The schematics for Dr. Shanner’s robots eventually ended up in the hands of the Society.

The Society was a huge congregation of super-villains organised during the mid-2000s. They had the means of mass-producing Nuclear Family robots.

After the destruction of the city of Blüdhaven, the Society sent in a team nicknamed the Nuclear Legion (Geiger, Mister Nitro, Neutron, Nuclear, Professor Radium). They were to investigate an intriguing radioactive leak.

But that took too long, and a copy of the Nuclear Family was sent in to assist.

The Family was instrumental in locating the radiation. It was an unconscious Captain Atom (Nathaniel Adam). But Adams was under the care of a local militia in power armourStrength-enhancing body armour, like Iron Man’s – a curious echo of the Atomic Knights.

This copy of the Family was presumably destroyed in the subsequent battle. 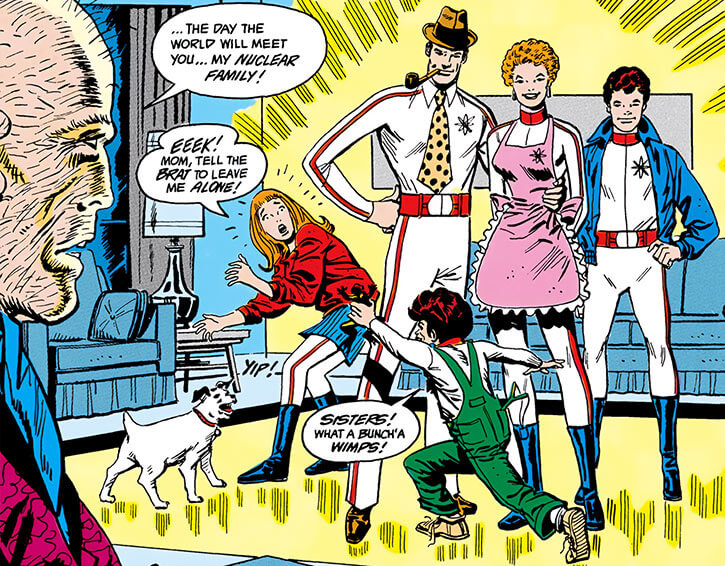 The Nuclear Family members are all programmed to stay in character.

They don’t need names. The model they follow provides pre-packaged roles for everyone to follow, determined by gender and age. Biff, the only one to use a name, is the one that deviates the most from this model’s ideal. 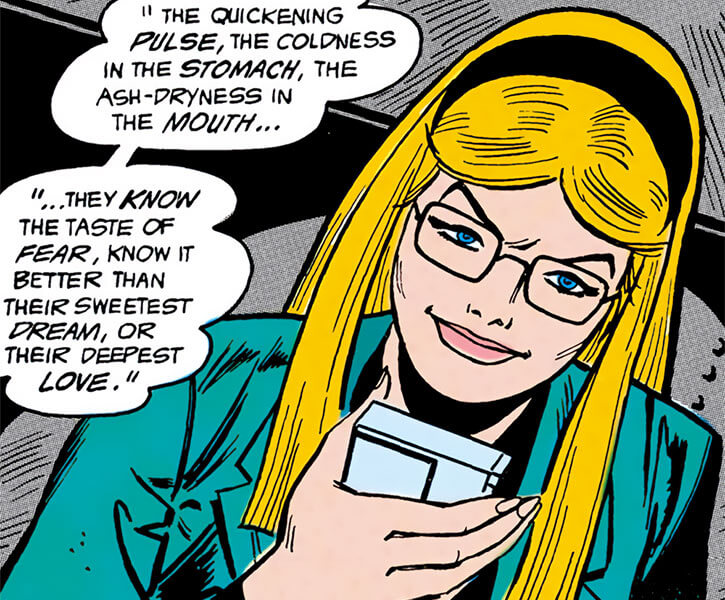 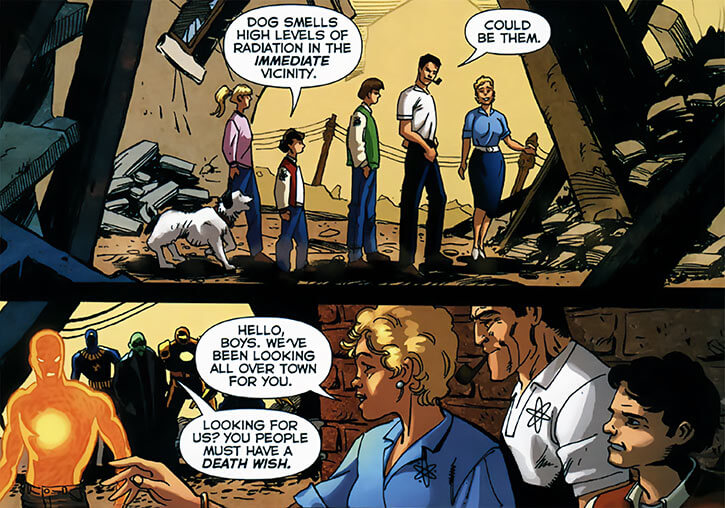 Having enough Attributes to be vulnerable to Mental and Mystical attacks is based on the robots marvelling about how lifelike their feelings of familial love were.

That sounded like it could be a case of high RV but low “hit points”. *Very* tentatively.

Their ability to form a nuclear detonation is abstracted out. Since a/ hopefully, it’s not gonna take place in-game and b/ there’s no data. Something like Bomb: 24, Flash: 13 and EMP: 16.