Nuke was one of the very few successes in the reconstruction of the super-soldier serum. His strength, speed, prowess, durability, reflexes, etc. are all on par with the legendary Captain America, making him a formidable combat machine able to crush nearly any human.

He has been further enhanced by subdermal plastic plating and painkillers. These allow him to take formidable strikes by master martial artists without even flinching. He’s also a highly trained and experienced Green Beret .

He wields a gigantic machinegun named “Betsy” – in reference to Betsy Ross , I’d assume. This gun has been used to destroy entire military units. It includes a “fatality counter” keeping a morbid track of the number of victims it makes.

“Agent Simpson” is apparently the sole survivor of numerous attempts by the US military to recreate the uniquely successful “super-soldier serum”. This is the chemical that made Captain America the greatest human fighter ever.

Barring further treatment (which the original scientist, doctor Erskine, called “vita rays”) the recipients of the serum become insane. Such was the well-documented fate of Captain America IV, aka the Grand Director, and his sidekick Bucky (Jack Monroe).

“Simpson” likewise became psychotic, but was more or less kept in check through extensive use of psychiatric drugs.

It is unclear whether Nuke was active during the 1960s and 1970s, especially during the Việt Nam invasion. While Nuke makes numerous references to having been there, this may have happened later during operations to recover American POWs. Or it might be the result of a schizophrenic delusion.

Nuke was used extensively in black ops since at the very least the early 1980s. He once conducted a long-range covert strike against Sandinista forces in Nicaragua, where he singlehandedly wiped out a well-defended encampment.

I fight the Devil

Nuke was always, during his known appearances, paired with a colonel – whose name was never given. Nuke had obviously great trust in this officer. This man seemed specially trained to handle Nuke’s volatile condition, and likely was a reference to Colonel Trautman in Rambo.

The colonel kept Nuke’s supply of combat drugs. He also flew the gunship that was used for transport, insertion, extraction and close air support.

In 1986, the Kingpin used his extensive connection within the US armed forces to have Nuke work for him. The objective was to eliminate the Kingpin’s archenemy, Daredevil. Daredevil was no match for the unstoppable and heavily armed Nuke. But he desperately fought anyway, hoping to curb the atrocious body count triggered by the collateral damages in the middle of Hell’s Kitchen.

Daredevil managed to disarm Nuke, and had to use “Betsy” to blow up the gunship that was supporting the super-soldier.

A new morning with America

The Avengers intervened – including Captain America. But Nuke was incapacitated by the effects of the drugs he had taken. All he could do was ask for “a white” (a chill pill countering his stimulants). A dejected Captain America then unearthed the Army/Kingpin connection. Cap interrupted a meeting between Fisk and a general, quickly discovering the truth about Nuke.

Nuke, meanwhile, escaped and attempted to kill both Captain America and Daredevil. He ended up mortally shot by gunship fire, and refused to be taken by Daredevil to an hospital. He died in Daredevil’s arms.

Nuke is a tremendously powerful specimen with a crew cut and an American flag tattooed on his face. He fights bare chested, wearing only green combat fatigues and combat boots.

Nuke is a burnt-out schizophrenic, a remorseless soldier, an addicted and haunted veteran. His patriotism is so exacerbated and irrational that it becomes poignant.

He’s a symbol of many things that are wrong with the American military might, but he’s not an evil man. Obedience and unquestioning loyalty toward God, country and his narrow vision of American values make him a tool without a conscience. He never questioned orders, no matter how obviously illegal.

Nuke’s insanity was centred on restoring the honor of the US fighting men after Việt Nam. He obsessed over the destiny of the POWs that were still there, and the shame felt by many veterans when they came back stateside. It is possible that he hasn’t been rational since the 1970s, and everything since remained blurred by drugs and insanity.

Nuke utterly refused to do anything that he perceived as un-American things. This ranged from the essential to the laughable, from refusing to give up his fighting spirit to refusing to drink an imported beer.

“This is the enemy… this… they lie about us… make us feel ashamed… we should never feel ashamed… never… I won’t let you down, sir.”

Much of the impact of the story was due to the confrontation with Daredevil (representing the Christian hero) and Captain America (representing the free patriot and the untainted American dream). Nuke was a twisted reflection of some of their ideals. Something similar could be done with Superman, the champion for truth, justice and the American way.

In that case, Nuke would have access to Bloodsport’s weapon transporter, including the gun with Kryptonite bullets, making him a match for the man of steel.

Bonuses and Limitations:
Skin armor only vs blunt attacks – not bullets, knives, etc. (-2).

Nuke’s flashbacks are different from the usual. It does not have a precise triggering circumstance, and it will not leave Nuke prostrated.

Rather, the tougher the fight Nuke is in, and the more elements are present that are reminiscent of Việt Nam (such as a jungle), the less he’ll stay in touch with reality and the more he’ll act as if deep inside enemy territory during the Việt Nam war.

While this *is* a traumatic flashback, this has little to do with the mechanism described in the rulebook under that name, and should be handled like a Catastrophic Rage.

Nuke routinely use three kinds of powerful drugs, to which he’s addicted. He always refers to them by the color of the capsule, such as “I need a white”.

When he stays under the effect of a Red too long, Nuke may become incapacitated. An OD will not kill him due to his tremendous constitution, but he’ll badly need a white. In game terms, this is one of the possible results if he rolls under his SPI. 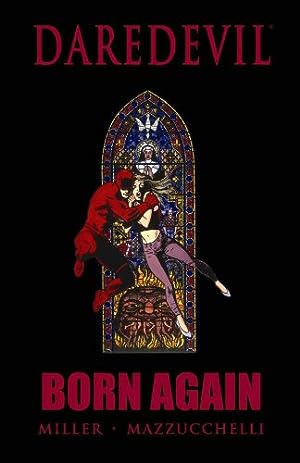 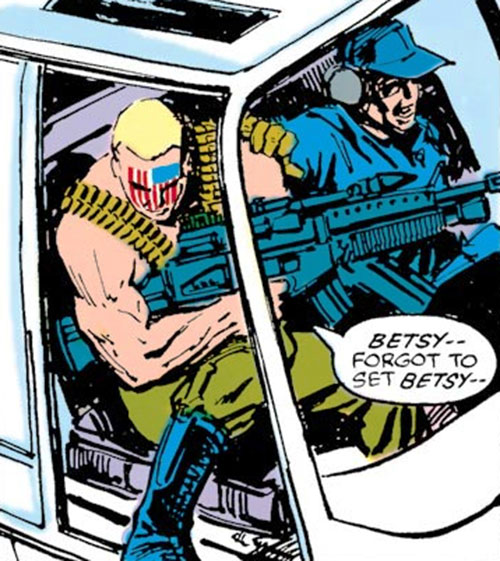 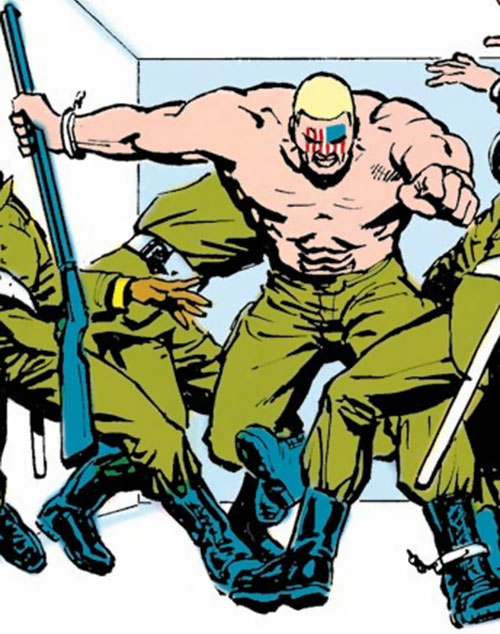