During the 1990s Nuklon’s powers seemingly mutated. His body was now even broader, bigger and more muscular, he no longer manipulated his density and he never was seen to grow. He was, however, stronger than ever. That remained true even when compared to the maximum size he could previously attain.

Since his powers changed again some time after he left the League, it seems likely that they evolve regularly. Perhaps this is an after-effect of the heavy thorium irradiation he went through during his youth.

Nuklon’s talent for piloting allows him to quickly master all sorts of flying contraptions. This includes lightweight vehicles such as jetpacks and Mister Miracle-style flying discs.

A few years after the death of Skyman and the destruction of Stellar Studios, Nuklon joined the “New Conglomerate”. It was a successor group to the Conglomerate super-group originally organised by Booster Gold, and the third team by that name.

This version was led by Templar (Colin Brandywine). It also included Jesse Quick, Echo (Mona Nockwood) and Hardline (Armando Ramone). Albert, however, was uneasy with the machinations of the organiser of the New Conglomerate, Claire Montgomery. Montgomery followed the trust of the numerous corporate sponsors and staged fake crises for the Conglomerate to very publicly solve, rather than have them act as real heroes.

By the sixth such “training exercise”, the rest of the team (even the greedy Echo) agreed with Albert. They were about to leave, but had to intervene in two genuine incidents – including the accidental reactivation of Amazo.

What ultimately happened with the New Conglomerate is unrevealed. It would seem that the group did not last much longer, perhaps due to the tensions between the largely heroic members and the corporate sponsors. However when Nuklon was next seen, battling Shrapnel in Seattle solo, he was still wearing his Conglomerate jacket.

Nuklon then graduated to what should have been the big time – the Justice League, which at that point was called “Justice League America”.

However, this occurred during the first half of the 1990s. This was one of the darkest and most confusing eras for the team. He applied along with the defeatist Obsidian, and they were teleported up to the new League satellite (an escape pod from the destroyed star craft of the Overmaster) along with the Blue Beetle.

“Beetle” turned out to be some sort of shape-changing infiltrator robot. Nuklon and Obsidian fought it long enough for the rest of the League to recover from its initial attack and destroy it. They thus earned their slots within the League.

Nuklon’s upbeat attitude and heroism drew the attention of Fire almost immediately, since she was looking for a man at that point. Being asked out by a famous heroine and model reinforced Nuklon’s positive attitude.

By the end of the first mission they started dating in Manhattan. Though the first date very nearly fell flat, they discovered some common ground despite their very different personalities and some good chemistry kicked in.

Charmed by this, Fire, who found it difficult to cope with being alone since the death of her very close friend Ice, started entertaining the idea of turning a relationship with Nuklon into something permanent. The embarrassed Nuklon told her that he was duty-bound to marry a Jewish woman, though.

Fire being very much Catholic, they reached an impasse. Nevertheless, with his usual emotional clumsiness, Albert fell in love with her.

Nuklon (and Obsidian) served with the League for a bit less than two years. They helped defend Power Girl and her infant son against Scarabus, fight off Judgement after the seeming death of Max Lord, and investigate the activities of the Strangebrood.

During that time Blue Devil, Icemaiden and Warrior joined the team. So did, arguably, the cynical alien Yazz, who was helping to run the satellite and the fairly large alien population it turned out to harbour.

Diana expanded further by making communicators and the orbiting JLA facilities available to every hero they could contact. This move was badly received by the Captain Atom-led splinter JL team, Extreme Justice.

Further cases included an attack by Lord Havok (actually operated by the mind of the deceased Maxwell Lord) and an attempt at invading Earth by Kraggz aliens. There was then an expedition in deep space with other Justice groups to prevent any further invasion from the Tormock fleet associated with the Kraggzes.

When Obsidian started having odd visions of evil and was driven to near-suicidal despair, Nuklon helped him hold himself together. Albert and several Leaguers used Obsidian’s powers to locate and defeat the Killer Elite, a group of villains whose actions were haunting Todd through his dark visions.

The visions and the actions of the Killer Elite were caused by the arch-demon, Neron. The demon’s influence was having a serious impact on Obsidian’s shadow form as the “Underworld Unleashed” events took place.

Meanwhile, Nuklon managed to stop the archer Merlyn, one for the members of the Killer Elite, from murdering Batman with a sniper shot. The other JLA members stopped the other Elite members. This allowed Obsidian to pull himself together, and Nuklon convinced him to see a psychiatrist to deal with his issues.

Nuklon found a female psychiatrist, whose care Todd refused due to his poor history with his mother and his sister. Albert had the shrink recommend a male psychiatrist for Todd, then convinced her that she should go ahead and ask Todd out.

During this general time frame, Nuklon met with Damage (Grant Emerson), the long-lost son of the original Atom. Emerson came to meet Rothstein after discovering his heritage, so that Albert could tell him about the father he never knew.

Coordinated by Yazz, Nuklon and an extended JLA membership fought against numerous monsters and demons. These were appearing throughout the world as the interdimensional barriers weakened from the Underworld Unleashed events.

He also got into some sentimental trouble when, after many years of being clueless, he finally realised that Obsidian was bisexual. Minutes later Nuklon made a pass at Icemaiden, who had to explain that she was mostly lesbian.

After letting off steam in a rather violent one-on-one basketball match with a superstrong alien, Nuklon cleared his uneasiness about Obsidian’s orientation. He then gave his friend a big hug, apologising for his surprised reaction and poor understanding.

The JLA in spaaaaaaace

At this point, however, Yazz accidentally triggered the purge protocols of the Overmaster’s module, which the JLA was using as a base. Nuklon and the rest worked frantically against the super-tech ship to save the large alien population living aboard, organising a desperate evacuation.

Yazz eventually regained control, but the ship engaged an emergency program and hurled itself light-years away from home.

Flash and Wonder Woman having left to get help just before the ship disappeared, the crew at that point included Nuklon, Yazz, Obsidian, Fire, Icemaiden, the Blue Devil, Power Girl, el Diablo (as a half-demon – long story), the werecat Civet and a motley population of aliens.

Soon after that departure, the life support systems started rapidly breaking down. As a result, Yazz had to arrange the capture/rescue of the occupants by the powerful intergalactic slaves-lord, Flicker. The Leaguers soon broke free, and proved an unexpectedly tough opposition.

Eventually, Nuklon, who as a Jew was particularly sickened of seeing Flicker treat his thousand of slaves as objects, flattened the enemy with a powerful surprise attack.

The aliens, including Yazz, decided to stay with the liberated slaves. They provided the Leaguers with a ship to go back to Earth. When they got back, though, the core members of the League were busy surveying the mess that the JLA had become.

Operations were put on hiatus for a short while. The League would soon be back in possibly its most impressive incarnation — the “Magnificent Seven” JLA, trimmed to its core members.

Nuklon was now but a Justice League reservist. But his career was far from over.

Nuklon’s red mohawk is an homage to the costume of both his grandfather Cyclotron and his godfather the Atom. These had a red fin on the head as one of their most distinctive features.

In his civvies Nuklon often wears a casual business suit – suit and mohawk was occasionally done back in the mid-1980s. He continued to wear good suits when going out even in the 1990s, though in warmer colours than what he wore in the 1980s.

In the 1990s, as a New Conglomerate member, Nuklon switched to long hair arranged in a queue extending to the small of his back. While this was certainly more in-line with the early 1990s fashion, the old symbolism of the red fin on the head was lost. He also, this being 1993, added a big brown leather jacket with padded shoulders over his Nuklon costume.

He kept the queue as a Justice League member, but ditched the New Conglomerate leather jacket.

This concludes our fashion section.

Nuklon’s personality has changed a bit since the Infinity, Inc. days — but not hugely so. He is significantly less hesitant to use violence than he was before, but is certainly not a brutal person.

He also lost much of his social awkwardness and youthful tendency to develop crushes. This mostly kicked in after he understood Lyta and himself were not meant to be, though he still can be a tad clueless on occasion. For everything else, the 1980s personality remains.

Albert was quite enthusiastic about joining the League – eager, in fact. He is particularly upbeat and positive about everything, in sharp contrast with Obsidian’s negative and defeatist attitude.

Albert still is a quiet person who devotes his time to heroics, basketball and reading. But he is deliberate about welcoming new experiences and always looking at the bright side of things. He is generally positive, honest and open-minded.

Though he was fed up with basketball after his studies and leaving the USC Trojans (a “treason” some fans still violently resented years after the fact), it is now his preferred pastime. Especially when he needs to unwind.

Interestingly, during his one Seattle appearance in 1993, he seemed more ruthless and less interested in being a good boy and having the moral high ground. He also was considerably more prone to violence. While back then this appearance was weirdly out of character (and not in a good way), it may now be seen as foreshadowing his crisis of conscience as Atom-Smasher.

By his next appearance, with Justice League America, though, he was more or less back to his old self.

(As a New Conglomerate member) “Sure, I got comped when I was with Infinity, Inc. But we weren’t in that for the money. It was about honour. We were the sons and daughters of the Justice Society, man. We wanted to… to…”

“The Justice League is there ! Now let’s see if some radiation-based power can do what magic can’t !”

“I think I’m a realist. But the reality is that everything works out great for me as long as I look on the bright side. Todd thinks I’m nuts.”

“It’s not that I’m a prude. It’s just… I was always a little geeky growing up, until my size and powers kicked in, and I guess I’m still… well… I’m not like the studs you usually date.”

Bonuses and Limitations:
Growth is Always On, Form Function and Already Factored In.

Advantages:
Credentials (JLA), Expertise (Aerospace vehicles lore, design and mechanics), Familiarity (Basketball, Jewish traditions, American movies from the 1940s to the 1960s), Life support (Will not develop lasting damage from heavy exposure to most forms of radioactivity), Lightning Reflexes, Popularity (As a Leaguer only).

Drawbacks:
Public Identity, Creepy Appearance (Size, physique), MPR (Must eat about three times as much as a normal person), MPR (His physical condition is reportedly unstable due to his mutation, and he requires specialised medical monitoring to make sure he stays in good health). 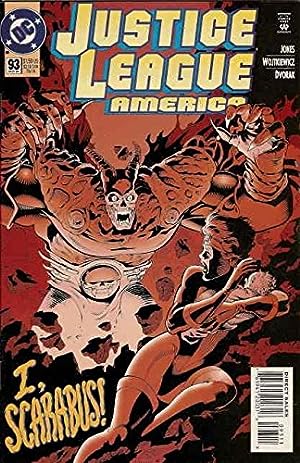 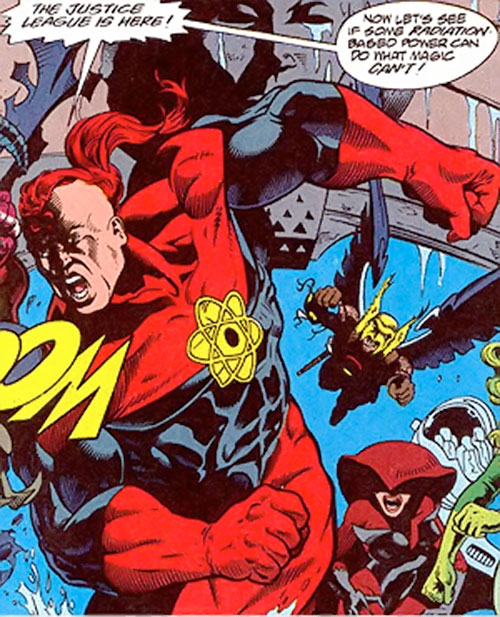 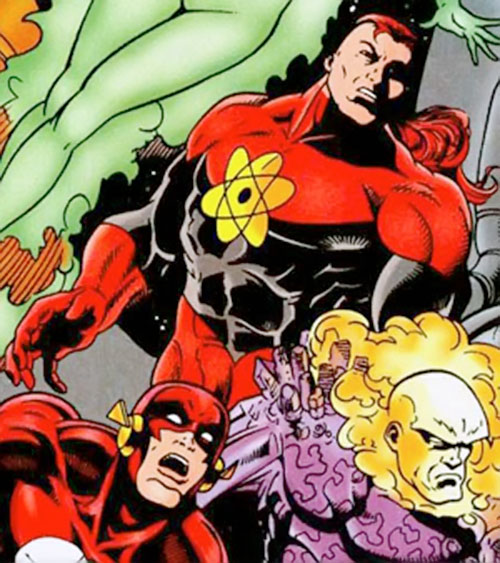 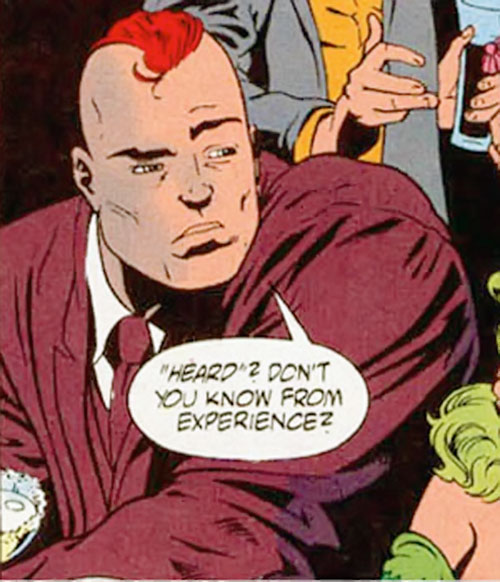 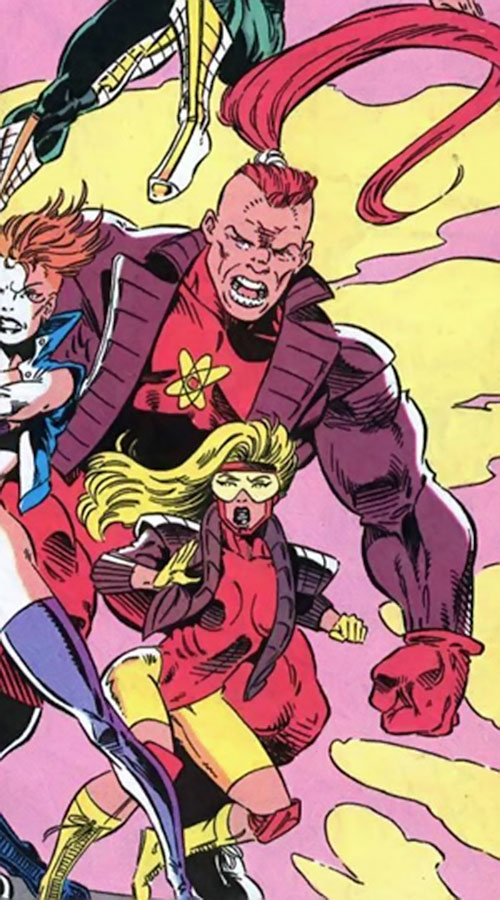