As Null, Sol has the power to restrict the senses of any target within range. He may do this selectively, allowing his target to function normally and granting himself and / or his companion Void the Invisibility Power. Or he may exercise his powers less subtly leaving his target bereft of all sensory input.

Though he can attempt to block all senses through one attack, when presented by formidable minds like those of Superman or Batman he often finds it easier to restrict one sense at a time. He usually begins with sight, followed by hearing, scent, touch, and, presumably, taste.

In addition, Null may use his powers to remain undetected by electronic surveillance equipment.

Null, Void, Swordfish, and Barracuda all bear on their palms the strange symbol that X’ult wears on his chest.

When any of these symbols contacts another, the bearers (with the exception of X’ult who always retains his powers) transform into their super-powered forms. This transformation expires after 10 minutes. It can be reset by once more bringing the symbols into contact before the time limit has expired.

In his non-powered form, Solomon is an extremely poor businessman, sailor, and judge of character.

Centuries ago during the age of piracy, an alien craft landed on the Caribbean island of Haiti. Among the crew of extraterrestrial explorers was X’ult, an aide to the second in command.

X’ult was consumed by the desire to conquer. When the craft left Earth after its survey, the alien hid in the jungles of the island. To enable himself to survive, X’ult arranged for one of the crew’s environmental adapters to be ejected from the ship when it took off.

The adapter was damaged on its decent to Earth, its metallic skin melting into slag. By the time the machine reached the island it looked like nothing so much as a large stone. One detail did survive, however. It was a strange symbol on one of the “stone’s” faces.

Jump ahead in time to World War II. A young man named Solomon accompanies his father on a business trip to Cuba. Sol “just didn’t have a head for business” so he chose to spend his time learning to sail.

While out in his sailboat he was caught in a sudden squall and blown off course. He washed up on shore at Martinique, a Caribbean island under the control of the Vichy French and their Nazi masters.

The authorities discovered that Sol was the son of an American businessman. Thus, they held him captive in an attempt to force his father into making business deals with them.

It was while being held prisoner on Martinique that Sol first met Peter McBryde, a smuggler and con artist. McBryde was on good terms with the French and Germans. He had been hired by Sol’s father to rescue him and, after plying the guards with American booze, the two men made their escape.

McBryde’s plane was riddled with bullets during their flight to freedom. As a consequence, the pair were forced to crash land in somewhere in Haiti. The two men were taken prisoner by the local natives and prepared for a voodoo rite. It was the test of the Sacred Stone.

The Sacred Stone, of course, was X’ult’s environmental adapter that the natives worshipped as some sort of divine artifact.

The men were forced to place their right palms on the stone. Although they experienced no pain their palms were branded with the strange symbol of the stone. The pair shook hands on their short friendship, sure that they were about to die together. When the tattoos on their palms touched they transformed.

Solomon and McBryde became Null and Void. Instinctively using their powers in their own defense, Sol and Peter escaped the natives. They were picked up on the shore by a passing ship. McBryde collected his money from Sol’s father and the pair went their separate ways.

A year later Solomon’s father died and Sol inherited the family business. Unfortunately, Sol still did not have any business sense and the company began to flounder.

Purely by accident, or so he thought at the time, he met Peter McBryde again in Vienna after the war. McBryde asked Sol to help him steal a shipment of Nazi gold bound for Russia. Believing the money he could steal as Null was his only chance to keep the business alive, Sol agreed.

In their guises as Null and Void, the pair began a long criminal career. Sol used the ill-gotten gains to keep his floundering business afloat. McBryde thrived on the excitement.

Eventually, Sol’s business troubles resurfaced. Facing an IRS audit, he contacted his old partner Peter McBryde. McBryde jumped at the chance to resume his criminal career. He persuaded Sol to go for a splashy, high profile crime. The pair would steal an item from an exhibit of trophies and mementos on loan from Superman’s Fortress of Solitude.

The centerpiece of the exhibit was a locket bearing an image of Lara, Superman’s biological mother. Null and Void stole the locket and battled Superman and his World’s Finest partner Batman at the exhibit hall. Sol made good his escape but McBryde, now in his non-powered form, was captured only blocks away by the two heroes.

McBryde refused to name his accomplice. At his trial, the criminal defended himself. Even though both Superman and Batman took the stand, McBryde won his freedom.

Wrath of the IRS

Not long after, he was contacted by Sol. His life had completely fallen apart. Following the IRS audit that prompted his return to crime in the first place, Sol’s wife and children left him. The IRS took his home for non-payment of taxes. Despondent and financially ruined, Sol needed another big Null and Void payday to set things right.

The pair decided to steal an object found off the coast of Costa Rica. It was a strange figure encased in an ice-like substance and sporting the same symbol on its chest as they bore on their palms. Under super-hypnosis, Batman remembered the strange palm symbols as well. Thus, he made the connection to the encased figure.

The figure in the ice-like substance was X’ult who had accidentally imprisoned himself with his own time-congealing powers.

In addition, Superman discovered another pair of figures encased in the same time-gel. These were a woman and a man, both in pirate garb, reaching out to clasp hands. Naturally, their palms bore the same strange symbol possessed by Null, Void, and X’ult.

Void sent the X’ult figure to The Void. But, soon after, Sol turned on his partner and McBryde was forced to flee into The Void himself.

There, X’ult escaped his time-gel prison. Void chose to ally himself with the alien. Meanwhile, Null and Batman had succeeded in releasing the male figure. He was a pirate hero named Swordfish. X’ult and Void returned from The Void and went on a rampage in the Caribbean.

The new team of X’ult and Void were able to release the female figure, Abigail Kent. She transformed into the pirate heroine, Barracuda. X’ult gained mental control over Barracuda and the trio battled Batman, Superman, and a reformed Null.

In the end, Superman succeeded in sending X’ult, Swordfish, and Barracuda back in time. Sol vowed to confess to every crime perpetrated by he and McBryde.

Null and Void have not been seen since. No doubt, McBryde was unable to talk his way out of this conviction !

As Null, Solomon is a large, black, man-shaped form with a swirling white “vortex” in his chest area. His eyes and mouth are indistinctly-shaped white forms on his face.

In his non-powered guise, Solomon favors business suits and a glum, beaten expression.

Solomon is a reluctant criminal. Even with the powers available to him as Null, he would prefer to avoid trouble. Unfortunately for Sol he is both an extremely poor legitimate businessman and a weak-willed follower easily manipulated by his friend Peter McBryde.

By the end of Null and Void’s second encounter with Superman and Batman, Solomon has become more assertive. He has lost much of his stomach for the criminal lifestyle and sides with the World’s Finest team out of a desire to get this whole mess behind him.

“I want to give the treasure back, Peter ! I’m not an international adventurer like you ! Batman knows who I am now ! I don’t want him hounding me back in the States ! I’d sooner face the IRS than The Batman !”

Parts of the two Null and Void / World’s Finest Heroes encounters are, at best, unlikely in the post-Crisis DC Universe. Still, the pair could still be easily updated to fall in line with current continuity.

This would require either removing the wartime portion of their origin or granting them a Reduced Aging Advantage. Null, and his roguish partner Void, present a perfect opportunity to run a straightforward “Audacious Theft” style adventure.

Note:
Presumably, by the end of their second encounter with Superman and Batman Null and Void have lost their Secret Identity Drawbacks.

As always, heights and weights are best guesses. I have chosen not to give Null either the Strange or Distinct Appearance Drawbacks as the normal humans that encounter him believe he is in a costume. As a result, and as far as the MEGS rules are concerned, he does not reap any benefit or suffer any hindrance because of his weird appearance.

During their second encounter with the World’s Finest team, Batman used his own body as a conduit for the transformation when Null and Swordfish could not quite reach each other. If any character attempts this conduit maneuver they are jolted by an immense release of power.

Treat this as a Bashing Combat Physical Attack with an AV / EV of 7 / 7 and an OV / RV of the conduit character’s Bod / Bod. The Attack appears to be energy-based and it is up to the GM’s discretion whether Energy Absorption might be used to avoid this damage. 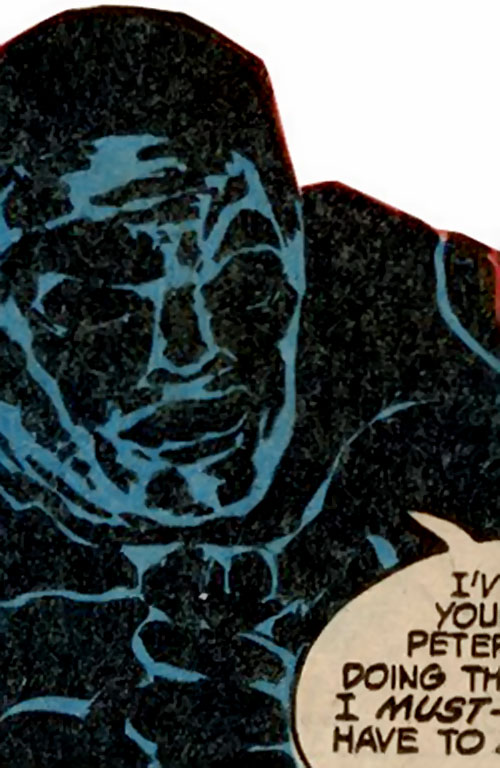 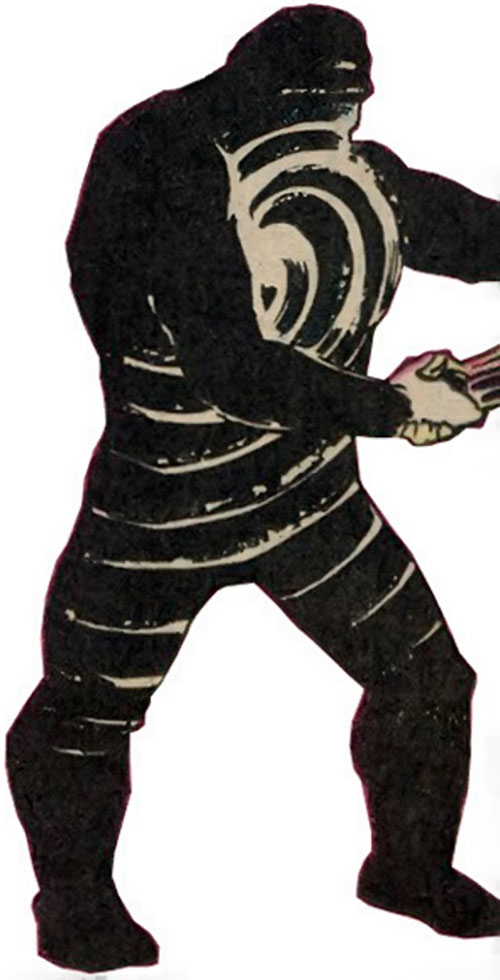