She’s a secondary character, but the story hinges on her being a witch. She’s also the easiest character from the story to reuse in another context.

Doomboy was written and drawn by Tony Sandoval  , from Northwestern Mexico.

*If* I understand right, his comics career truly began after he moved to Europe, with Doomboy being published in France in 2011. Some years later his work started to see translated US releases, with Lion Forge  and Magnetic Press  .

Doomboy is about young adults maturing, doom metal, life as a metalhead in Northern Mexico, processing grief, personal truth and creativity, and fear. 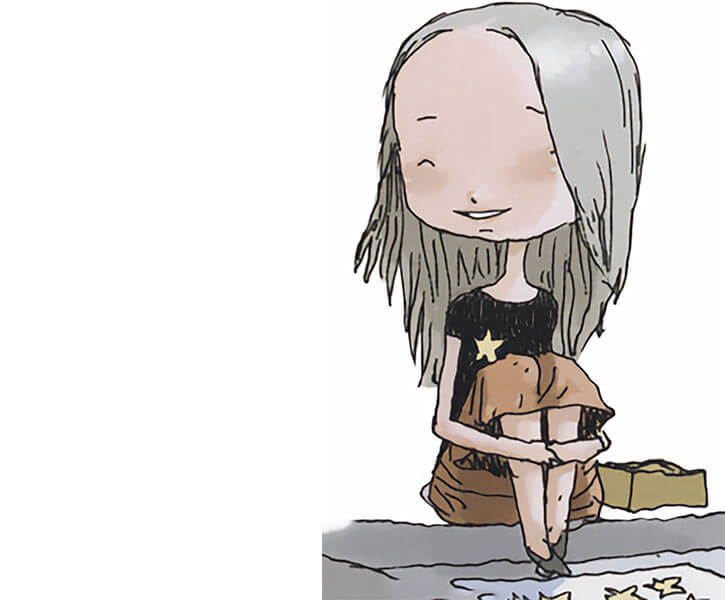 Nuria can cast spells. These normally have to do with the sea, the wind, and grief.

She might be a human witch. But there are implications that she’s actually some sort of mermaid or sea nymph.

There’s also an implication that she’s in some manner deadly to men, even if she doesn’t want to. Perhaps having sex with her is lethal. Or maybe she reverts to her true form if she loves.

Nuria also has ties with snake symbolism. Here, the snake seems to be both an expression of grief, and a way to communicate with the recently dead to let go of the sorrow about their passing.

It may be a visualization of the soul.

She knows how to survive in the wilderness. But her spells definitely help. For instance by calling fish to her so she can catch and eat them.

She also had a trick where she’d hide in a sand-covered hole in the beach. It may just have been a prepared and camouflaged bolt hole, or they may have been a magical component.

Some gloomy-but-not-too-aggressive Mexican doom metal sure seems appropriate. Let’s go with the Tronautas.

(Doomboy takes place in a primarily Hispanophone but with a strong estadounidense influence area, perhaps during the 2000s. My guess would be the coast West of Ciudad Obregón, Mexico  . That’s where the author used to live, and he makes a cameo in one panel as a local.)

Nuria mentioned that she had become estranged from her family “a while ago”. If she’s indeed a magical sea creature, this may be when she decided to live among humans.

For a time, Nuria was a street vendor in the Ciudad. She sold cheap phosphorescent stars, which she said “helped with imagination”.

A one-time customer was a young man going by “ⅅ”. He sought to improve as a doom metal guitarist, and liked having a talisman symbolising creativity.

But the police didn’t want her around, as a vagrant without a commercial license. She eventually had to leave the Ciudad.

Nuria went to live on the shore, in a rural area. Coincidentally, ⅅ was living on the outskirts of the nearest small town.

ⅅ thus randomly ran into a magic wind summoned by Nuria, perhaps as practice. The air of this wind looked a bit like snakes or eels. This scared ⅅ.

Minutes later, he learned that his beloved but recently estranged lover Anny had died.

ⅅ’s shock and grief resulted in a hole physically appearing in his torso. Apparently, this was an interaction with Nuria’s spell – and perhaps the star talisman. A voice told ⅅ that if he dwelt on Anny’s death for too long, the hole would only get bigger.

To shake his grief, ⅅ started practicing the guitar on a desert beach.

While he and a friend were fooling around with an old radio, they heard a strange and beautiful sound. Perhaps because of the star talisman, ⅅ had a vision in the sky. He saw Anny and extinct sea life (actinocerida  or similar).

This unlocked his musical creativity. As he processed his grief, ⅅ created superb doom metal guitar solos on the beach.

Takes me back to the place that I know

While admiring a storm at night, ⅅ glimpsed Nuria. She reflexively fled and hid under the sand. But ⅅ was accompanied by Anny’s dog, who sniffed Nuria up.

Concerned about her, ⅅ invited her home to get something to eat. Nuria warily agreed, but ⅅ was just a soul whose intentions were good. As Nuria ate and relaxed, a mutual attraction began to appear. Though it went no further, the strange girl nevertheless had to leave.

That night, ⅅ dreamt that he was talking with Anny’s ghost on the beach. The star talisman’s cheap glow-in-the-dark paint also reignited. And though Nuria was gone, ⅅ found her spellbook – which included instructions about letting go of the dead.

His musical inspiration at its peak, ⅅ went on to play a new session on the beach. This solo was meant to contact Anny one last time, and close the magical hole through ⅅ’s torso.

But trouble had been brewing for ⅅ at the Ciudad…

The interpretations above and in the game stats fully match Nuria’s observed behaviour and performance.

But it doesn’t mean they’re necessarily the correct ones.

It’s based on stock RPG/fantasy elements about nature spirits and witchcraft.

There presumably are other interpretations, more based on local lore. The oldest known folks there would be part of the Clovis lithic culture  . And I assume that the Cd. Obregón area would have later been under Yaqui  influence.

But of course, that the story happens in Mexico doesn’t mean that it draws from local myths. Frex, the way Doomboy projects his imagination on the storm is firmly Nordic Doom Metal, with dark fantasy “Viking” warriors à la Death Dealer.

In fact, it may make more sense to interpret Nuria as some sort of selkie   ! If so, her Spanish is really good.

Or maybe no magic was involved at all. Maybe she’s just a street crazy who doses her “imagination” star charms with slow-release hallucinogenics. 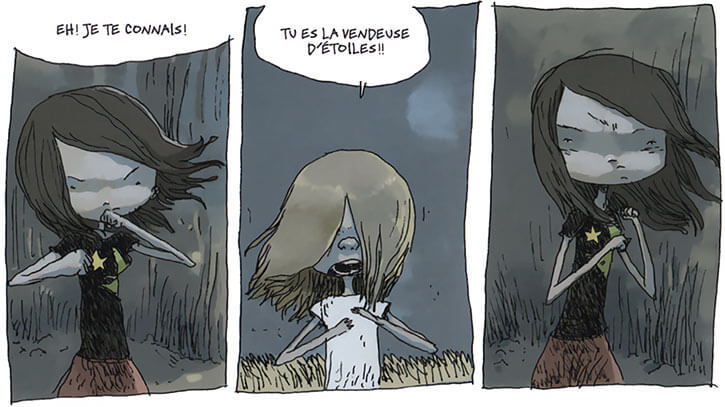 Most characters in the story seem to be about 19. Sandoval’s stylised art use infant-like proportions for most everybody, but in this case the cast does seem pretty young.

Once an attraction appears and ⅅ gets physically a bit closer, Nuria’s appearance becomes slightly distorted. Her hair starts looking ephemeral, as if seen through sea water.

Nuria’s T-shirt bears a simple drawing of a snake reaching toward a star.

She’s an attractive lass, but that’s not usually quite visible. Since she lives in lonesome poverty (and eventually in the wilderness).

A mysterious, cool, fresh-and-nice-but-inscrutable young woman. She’s obviously interested in nature and mysticism, but she won’t be more precise than that.

Nuria talks in allusive ways. But to most people it simply seems that she’s referring to hurtful but ordinary parts of her past.

Animal Summoning and Anatomical Separation might be Rituals rather than Powers.

Nuria had a notebook with instructions about how to cast her spells.

Fluid form explains how she could hide in a small hole in the sand, and why she doesn’t seem fully material under certain conditions.

Nuria once states that she didn’t summon the Air Animations. But when ⅅ finds her spellbook, there’s a wind summoning spell. I assumed that she simply was covering for being a witch.