Nyola the Aztec Priestess appeared in a stock 1940 Hawkman story. And so it remained for 45 years, until Roy Thomas  exhumed her for a sort-of-return. Roy, you tomb raider ! 😺

“Aztec” was a name used by Europeans to refer to people with ties to the Triple Alliance that existed back then. It doesn’t really map to anything else. So Nyola should *probably* be referred to as a Nahua priestess, though I don’t know enough to be sure.

In her 1940 appearance, Nyola appears to be a resourceful leader, with ministerial training. But there isn’t enough material to go beyond these generalities.

When she returned, Nyola was armed with a large, broad-bladed scimitar.

(Historical Nahua folks famously didn’t have swords, since the area had little hard ore such as copper. But there’s no reason why Nyola wouldn’t consider that Turkish swords are awesome and she wants one. A well-dressed girl has to follow falchion, right ?)

She also seemed stronger than she looked. Though it may have been artistic exaggeration, Nyola could send a bound Hawkgirl tumbling back with but a backhand slap.

She can also control the weather. This is apparently done by magically calling upon the rain god Tlāloc, so it may be restricted to making conditions rainier and stormier. Effects include :

Nyola was reputedly a reincarnated daughter of Montezuma.

This likely refers to Motecuhzoma Xocoyotzin , who was the Nahua emperor during the early 1500s. He was the one in power when Cortés and his conquistadors rolled in.

This era saw the fall of the great empires due to a complicated mix of devastating plagues, political mismanagement, the anger of peoples conquered by the Triple Alliance, and Spanish meddling.

Apparently, Nyola was heading a religious and political resurgence of imperial Nahua culture in Yucatán (we’ll discuss that). Most locals feared her and her cult.

During the late 1930s, one Chet Norris wrote “a book about the Aztecs”. In 1940, a Nahua priestess named Nyola came to the US. She went after Norris and his sister Irene. Her exact motivation is unclear :

Nyola came well-prepared. She had one or two enforcers with her, they all spoke fluent English, they had hypodermics filled with knockout drugs, and they brought sacrificial instruments. One was a sacred glass dagger, another a pail of water for ritual drowning.

Their goal was specifically to kidnap Irene Norris, who was “a chosen of Yum Chac”.

The operation was successful. However, they had to kill a witness through ritual drowning, and one of the enforcers left the glass knife behind in the confusion. When he returned to get it, he was arrested by Hawkman (Carter Hall).

(Yes, this is essentially the same storyline as the Tiger Woman’s. Good catch.)

Nevertheless, Nyola sailed back to Mexico with her captive. Then they joined donkey caravans to Yucatán, as the sacrifice would take place in Chichén Itzá (?). For some reason, Hawkman followed all the way, considering he had to catch Nyola in the act (?).

Once Nyola launched the ritual to sacrifice Irene Norris to the rain god, Hawkman swooped in (swooping is bad !) to rescue her at the last second. A local sheriff and posse, who had been warned by Hawkman, charged in and killed the Nahua faithful.

To avoid capture, Nyola leapt into the sacrificial well – and possibly to her death.

Once upon a time in Yucatán

Now, some of y’all are probably going “wait, what ?” – especially our Mexican readers. Let’s explain.

First, the trip from New York City to Yucatán involves crossing mountains. But it’s a detail and, hey, maybe the ways to reach Yucatán in 1940 were less than direct. Venial.

Most of the problems involve confusion between the Maya and the Triple Alliance. The big ones :

Confusing the two is like mixing up Early Christianity Romans and Tsarist Russia, give or take. The Maya were a preclassic culture that lasted for a looong time, in what is now Southernmost Mexico and further South. Whereas the Nahua were around circa the 15th Century, in what is now Central Mexico.

Our proposed No-Prize Hypothesis  is that Nyola and her sect were a religious and political resurgence movement exploring the Mayan heritage found in Nahua myths. In this hypothesis, they were building a modern syncretism of the two. The likely did so using magic and memories from past lives.

In this hypothesis, we could see her as a Mesoamerican equivalent to the theosophists . Maybe in the DC Universe she’s the one who popularised the “2012 Maya apocalypse” stuff.

Nyola’s second appearance took place in 1942, though it was chronicled in 1985. But while she’s introduced as a foe of Hawkman, she seems to be a different character.

She now has magic powers, seems motivated by greed, and is whiter than a shy Viking man’s buttocks in February. ¿Qué diablos?

In 1942, villainous worm Mister Mind accidentally ended up on Earth-2. If this sentence makes no sense, please see our article about the Earths and eras of the DC Universe. 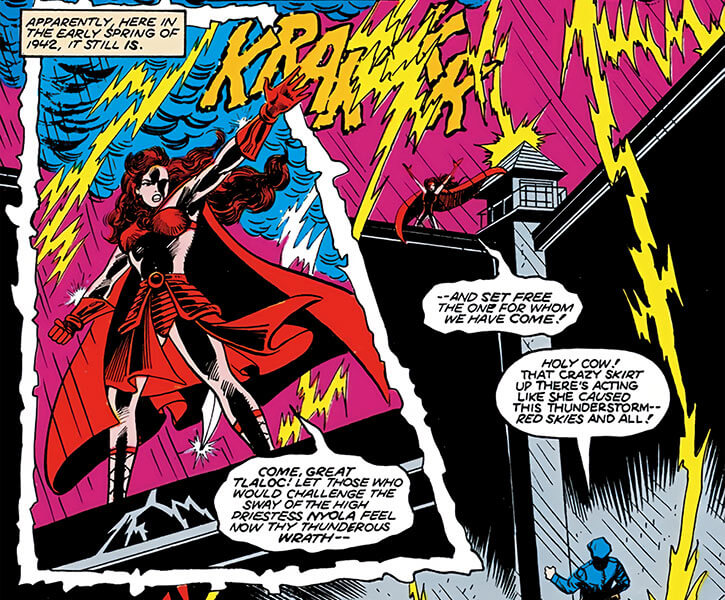 Mind assembled the first version of his Monster Society of Evil, a sort of anti-Justice Society of America. Among them was Nyola. She seemed in for the money, and for opportunities to sacrifice costumed heroes to her god.

Nyola captured Hawkgirl (Shiera Hall), in part as revenge against Hawkman. Both women detested each other, so it is possible they had an unchronicled encounter before that date.

They then stormed a prison to free the Dummy, whom Mind wanted on his crew. During that operation, Nyola stunned Superman himself with her summoned lightning.

Hey hey rain / Get off of my window

However, the Monster Society members grew tired of Mister Mind. Nyola and her colleagues Ramulus, Mister Who and the Dummy started organising.

When Mind revealed that he intended to conquer the world, they mutinied. They somehow summoned Oom the Mighty, a former Monster Society member who was more powerful than even Mind.

However, Oom then declared himself the leader. The pragmatic Nyola realised that they had little choice but to obey him. Oom decided that they would frontally attack the All-Star Squadron, in their headquarters. He forced the Monster Society to follow him.

Nyola started blanketing the area in a storm, but a batarang prevented her from gesturing to cast spells. She eventually freed herself, but by that point the situation was FUBAR.

The Dummy convinced Green Lantern (Alan Scott) to destroy Oom before he’d kill everyone. Mister Who, Ramulus and Nyola apparently made their exit in the meanwhile. 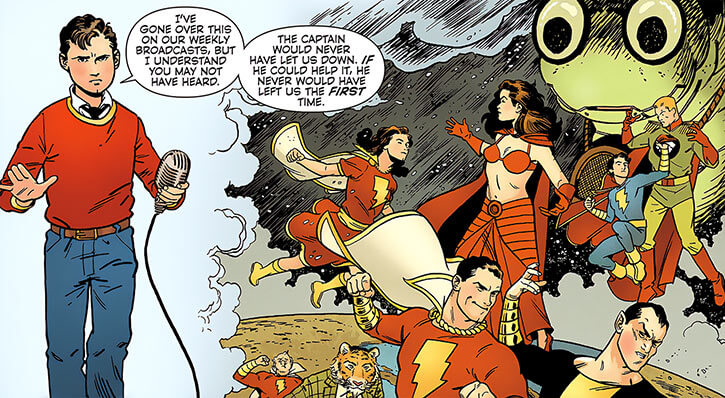 The 1942 version’s skin tone seems redder and more tanned than Hawkgirl’s, though that’s not consistent.

Her hair colour evokes henna dyeing, though there’s no reason why it couldn’t be natural.

In her 1940 appearance we can see that she’s a clever leader and pious about “Aztec” divinities. And that’s about it – these were short stories.

In her chronicled-in-1985 appearance, she seemed pragmatic, greedy and to be something of a bully. But she gets little screen time, so it’s hard to be more specific.

Though she was interested in human sacrifice she didn’t kill random opponents such as police. Presumably, it has to be done ceremonially or it’s worthless.

The 1940 stats above are arbitrary, due to lack of material. It’s just thrown in in case somebody needs ’em.

In 1942 Superman hadn’t been established as being vulnerable to magic, so Nyola needs strong APs of Lightning to affect him like she did. I’m assuming she also spent Hero Points. See our Superman as of 1942 stats for more.

*However*, Roy Thomas is using an early 1980s retconned version of Earth-2 1940s Superman. This version is retroactively vulnerable to magic. Frex, he cannot breach the magical barrier around Axis countries. The exact level of vulnerability isn’t consistent, though.

Thus, it is likely that she actually has lower APs of Lightning (07 ?). But that depends upon how vulnerable Superman should be to magical lightning at that point.

Of course, this *assumes* that Nyola’s weather control is magical in nature. It could be a Storm (Ororo Munroe)-style metahuman power that Nyola sees as a divine gift for religious reasons, but isn’t magical per se.

The Occultist score is largely based on the *assumption* that she played an important role in bringing Oom back. And the STR is arguably highballed by 1 AP since that makes her more interesting. Generally, it’s all quite speculative. 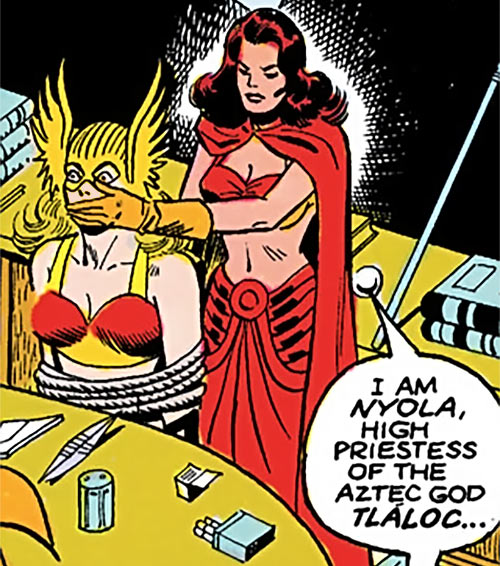