This is a monster from the landmark Quake video game in 1996.

These lobotomized thugs have adequate skill with their weaponry.

They have been implanted with techno-mystical probes. These trigger a constant state of rage relieved only by a spasm of ecstasy whenever they kill an enemy.

This process is irreversible and PCs should not lose Hero pointsDC Heroes RPG concept expressing narrative importance/immunity for putting these unfortunates out of their misery.

(The origin listed therein is speculative. It assumes that the humanoid appearance of these enemies was the result of Shub-Niggurath subverting ancient humans during a previous invasion attempt. Since it had transformed the modern-day soldiers that entered its realm into Grunts and Enforcers.)

These primitive warriors presumably are former humans captured during Shub-Niggurath’s previous brief forays into the Earth dimensionOther realms of existence that are not our universe in times past.

Consequently, they are found just inside the gateways, on the outskirts of Shub-Niggurath’s domain.

There are plenty of Ogres, though they are mostly found alone or occasionally in pairs. 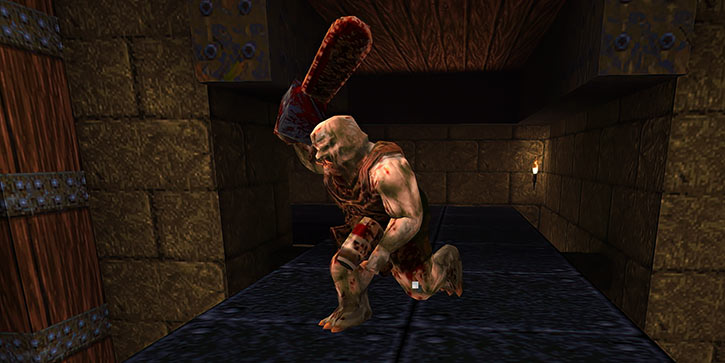 Ogres are the pathetic remnants of early hominids captured by Shub-Niggurath in Earth’s prehistory.

(Their size, and their tusks (far more visible in the 2021 enhanced version of the game than when this entry was originally done) suggest they may not be a common hominid species, or may not be from Earth — Ed.).

These massive thickly built brutes wear simple leather tunics over their tightly-drawn, rotting skin. Their bullet-shaped hairless heads tower over those of the other human minions.

The Ogres have served Shub-Niggurath long enough to have seized more advanced weaponry from previous conquests of Shub-Niggurath. Thus each Ogre is armed with a pistol-grip grenade launcher and a huge chainsaw.

Ogres may have been inspired by Leatherface. 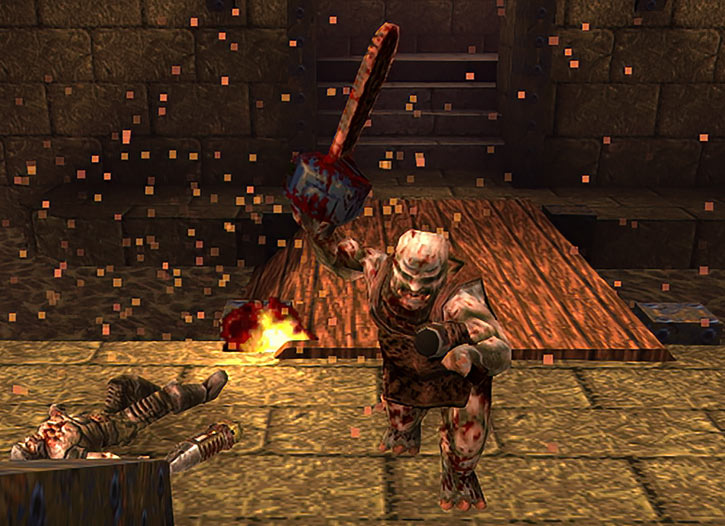 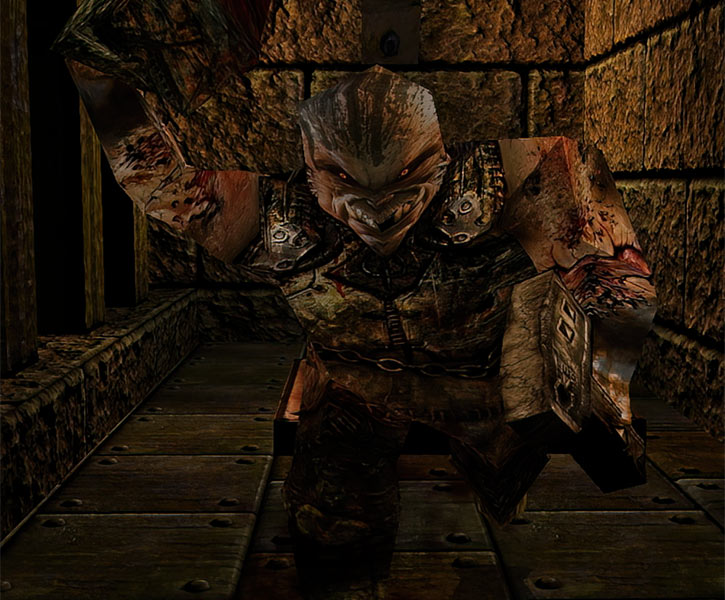 This alternate ogre appearance is used in the Quake Reforged mod  .

Any malevolent mystical entity could seize control of a S.T.A.R.Labs teleportation experiment. These twisted mockeries of men would be lying in wait for the hapless PCs as they made it into the invader’s home dimension.

Growth is Always On, Form Function and Already Factored In.