They get a capsule entry due to :

Ogrillons are stronger, faster, and meaner than the average orc. They can fight bare handed, due to : 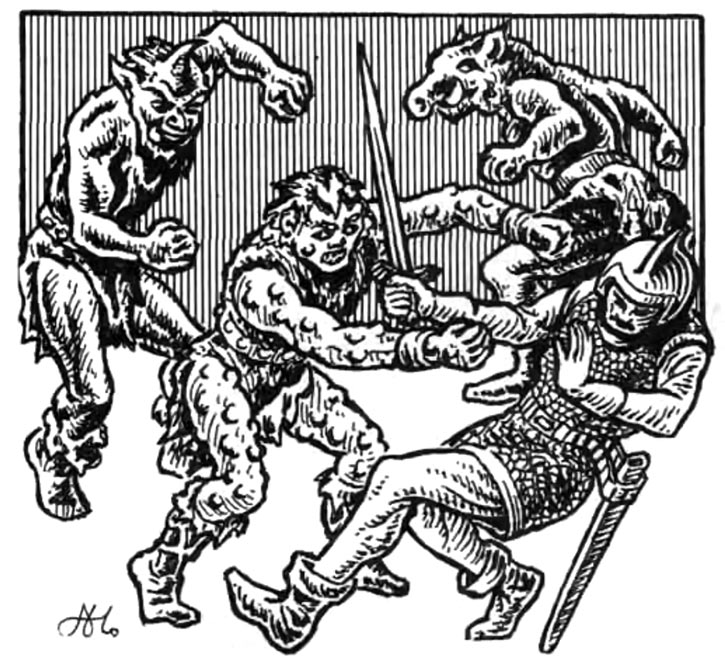 There also have small bone plates under their skin, giving them a level of protection not unlike scale mail.

Ogrillons are dangerous for ordinary people and soldiers. Their fists hit about as hard as a mace, so metallic body armour doesn’t protect as much as you’d expect. To mid-level fighters though, generic ogrillons aren’t much of a threat.

But most people aren’t mid-level anything.

Ogrillons are half-orc, half-ogre hybrids. They are routinely confused with orcs, but an expert might be able to tell the difference. Ogrillon are taller, they have bony protrusions over their body and in particular their fists, and they fight without weapons.

Ogrillons often associate with other humanoids – particularly orcs, but gnolls and the like are a possibility. They might work as bandits, mercenaries and similar occupations. Or they might be fully integrated with an orcish warband. Orcs like having such guys around as assaulters.

Ogrillons might work for evil humanoids when simply promised fights and food. However, some also seem interested in gold, considering it to be a good luck charm. Paying ogrillons with gold pieces thus occurs.

“Ogrillon” is used for one general type of orc/ogre hybrids. There’s a significant amount of variation among such half-breed humanoids.

For instance “orog” orcs, larger and meaner than ordinary orcs, are thought to have ogre blood. There are also half-ogres of various stock who are taller and more bestial-looking than ogrillons. Ghorghor Bey  may have been the most formidable and famous of those.

Thus, “ogrillon” is probably not a valid zoological label. It may be an arbitrary set defined as “large orcish types who probably have ogre blood, have subdermal bone plates and eschew weapons”.

Bonuses and Limitations:
The EV isn’t considered an unarmed attack for Genre Rules and other purpose. It is treated as a bludgeoning weapon, as can be expected for EV.

Skills:
Probably not, though a few APs of Military Science (Survival and/or Tracking) aren’t impossible.

Connections:
Might have a Low Connection to a faction of evil humanoids.

Equipment:
Normally but a loincloth or the like. Some food, some gold pieces, etc. might be carried by those who have some sort of crude pockets or satchel.

See our D&D article for a discussion of scale.