This is the final third of this big article. The full series goes :

For the disclaimers, the image credits notes, the goal of the article, etc. – see the first third, and the guide to our weaponry articles.

This strange 1854 design never played an important role by itself.

However, this design resulted in the .22 rimfire metallic cartridge – or .22 Long Rifle, the most common round of ammunition in the world. The Volcanic business venture and this metallic cartridge also became the assets that allowed Smith & Wesson to be born.

The Volcanic is a lever action pistol. It’s a shortened and modified version of the Volcanic repeater rifle.

This is part of what gives it its unusual looks. The Volcanic is an excellent prop for stories that include some sort of steampunk or Weird Science pistol.

In such stories, the Volcanic would presumably be a forerunner for later semi-automatic pistols. And the lever would just be a fancy trigger guard instead of being the action.

The game stats below assume such a fantasy/steampunk semi-auto version of the Volcanic.

A radically shortened Winchester lever-action carbine with an enlarged handguard.

It can be shot one-handed in a pinch – and fits into a pistol-style holster.

The Mare’s Leg is used like a very short carbine. If only due to the necessity of working the lever action.

It is cinematically depicted as being quite powerful despite the shortened barrel. Though the shortened tube magazine under the barrel can only hold so many .44-40 rounds.

This weapon was the signature gun of Steve McQueen’s Josh Randall in the late-1950s TV series Wanted: Dead or Alive.

Several shows have since referenced it. For instance Gina Torres’ Zoe uses one in Firefly. As does Sheena Easton’s Crystal Hawks in The Adventures of Brisco County, Jr..

The notion of heavy blaster pistols in Star Wars being cut-down blaster carbines might also have been inspired by this weapon. Though the one used by Han Solo was based on a Mauser C96 pistol.

Here is the beginning of a Wanted: Dead or Alive episode showing the mare’s leg both holstered and shot.

A relative of the Mare’s Leg. This category references the Winchester lever-action carbine used by rancher Lucas McCain (played by Chuck Connors in late-1950s TV series The Rifleman).

It also had an enlarged D-shaped handguard, but is full-sized.

More importantly, the trigger is automatically pressed by a pin whenever the handguard is fully brought back against the body of the weapon. This means that the carbine can be fired extremely quickly by just working the lever action back and forth.

In fiction and demonstrations it is as fast as a semi-automatic gun. And accuracy isn’t impaired in the least by rapidly working the lever.

Another bit of coolness is that the enlarged handguard allows a trained person to chamber a new round by spinning the carbine in a specific manner. A move most action cinema fans now associate with the lever-action shotgun used by the T-800 in Terminator II.

This is useful both for flourish, and when a second hand is not available to hold the body of the carbine while the lever action is being worked. Say, whilst riding a horse.

This video demonstrates the “Rifleman spin” and shooting a replica of the show’s signature weapon.

The fictional footprint of this gun is basically one scene in A Fistful of Dollars. Plus one in the original, obscure Django. But it was a memorable one.

The prop used in the movie is based on a Belgian design, the mitrailleuse Montigny. Which was secretly adopted by the French military as the mitrailleuse Reffye in 1866. This design was much less successful than the Gatling gun, however.

A mitrailleuse of this era has multiple barrels packed together in a metallic cylinder (37 barrels for the Montigny, 25 for the Reffye). It is a breechloader – a metallic plate bearing 37 or 25 large-calibre bullets is attached at the rear of the gun, loading all barrels simultaneously.

A hand crank is then turned to fire all barrels in rapid succession, then the rear loading plate is replaced with a fresh one.

This design is a light artillery piece, with the loaded gun being almost 800lbs without the wheeled carriage. 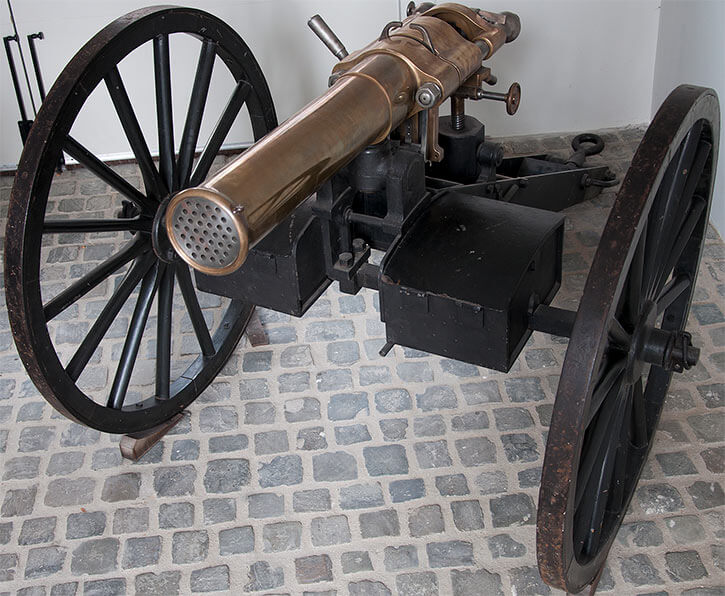 This is a revolver pistol that doesn’t have a cylinder fitting into the frame.

Instead, it is fed by an imposing chain bearing 20 loaded chambers. This isn’t unlike the Gattling machinegun in this respect.

The best-known real world example is a mechanical curiosity, the 1866 Josselyn revolver. One example is kept at the Smithsonian  .

It shoots a modest .22 round. Based on comparable weapons of that era, one suspects that bringing the chain’s next chamber into position isn’t a rapid endeavour.

Like many guns in the “Exotic” section of our firearms articles, the Josselyn doesn’t appear to have been produced in significant quantities.

But it *looks* intimidating. So a fictional version would likely shoot a large-bore round, and characters would be able to operate the chain and recock the hammer in a fast and somewhat reliable manner.

In effect that would be “a Colt” as defined in this article, with a high capacity but no rapid fire. A steampunk version could even have a motorised chain !

A chain revolver is part of the Hunt: Showdown video game’s arsenal.

If you want the weapon to be a smidgen more realistic, have it fire a smaller round (Projectile weapon: 03) like “a Smith & Wesson” as defined in this article. 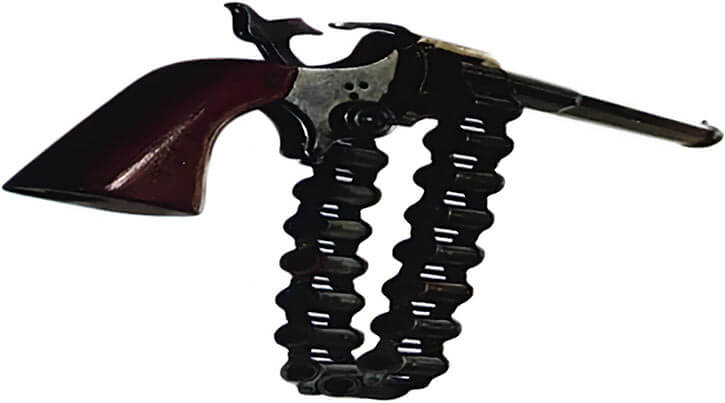 This is the same general type of repeater rifle as the revolving rifle above. But it has *two* revolving cylinders, one above the other. There’s a mechanism to quickly switch when the first cylinder is empty.

This is based on a 1855 British patent by one Joseph Enouy. At least one such gun was built – it’s now a museum piece. But it would fit pretty well in steampunk or quasi-steampunk setting.

Here we’ll assume that there’s no scope. And that it fires a medium-range ammunition (prolly .44).

Part of the patent was quick-switch cylinders. That is, you remove the whole cylinders and replace them with another, loaded pair – rather than reload chamber per chamber. We’ll assume here that this worked smoothly and reliably.

This is from the same patent-holder as the dual cylinder rifle, also in 1855. And similarly, at least one was actually built and is now kept as a museum piece.

However, this specific model doesn’t have a mere two cylinders. It has eight – hence our name for it.

These are arranged along a “meta-cylinder”, used to switch from one of the eight loaded cylinders to the next. So, yes, 48 shots.

In the real world, this is bulky and impractical in terms of carrying, aiming, maintenance, manoeuverability, etc.. But in a steampunk reality, a refined version of this could be a bulkier version of a modern semi-auto submachinegun. It would absolutely have a vertical front grip.

The stats below assume such a steampunk version, not a realistic one. But it also assumes a relatively weak rimfire round.

Octorevolver [BODY 02 Projectile weapon: 03, Ammo: 48, R#04, Drawback: Long Reload, MPR (bulky and awkward), Note: may require an Automatic Action to work the action unless this is waived by the GM for this campaign]. 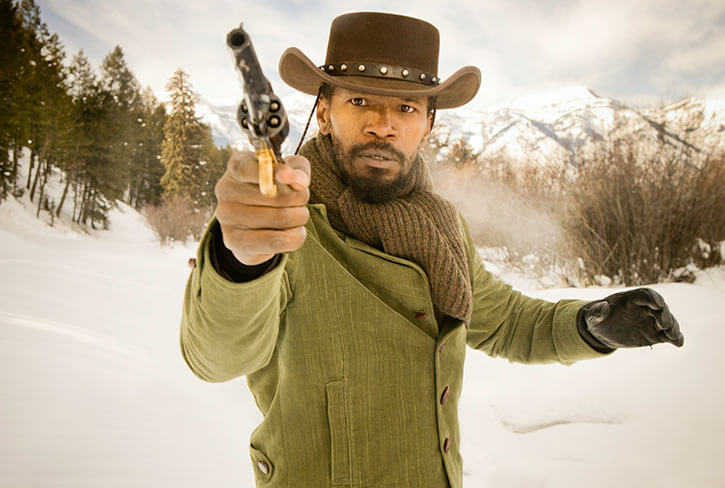 The following weapons are from the turn of the century, after the classic Old West era is over.

Though it is not uncommon for late designs to be anachronistically featured (weapons from the 1870s in stories set in the 1860s, or from the 1880s in the 1870s) the following weapons look and feel too much like XXth century weapons and do not appear in Old West stories.

They might, however, appear in rarer stories set at the turn of the century, which is a sub-genre. The video game Red Dead Redemption and the movie The Great Silence are two examples. A Fistful of Dollars probably also counts.

This weapon is visibly the direct ancestor of the 1908 Parabellum pistol (“Lüger”). Though as an early design it was less robust and more awkward to use, and its action was much larger.

Still, it fires very quickly, and is reloaded with a eight-shots clip, making it a sort of preview of the XXth century. That also makes it good for alternate history stories.

Here is a short (less than 3 minutes) presentation of the Borchardt:

The highly-demanded Mauser was essentially a modern pistol with :

The only obsolete characteristic that is readily noticeable is its stripper clip – it doesn’t use a detachable box magazine (“clip”).

Instead the magazine is built into the weapon, and you run a strip of metal with ten bullets attached to it through the magazine. As you do the bullets are detached from the strip and stored into the magazine. 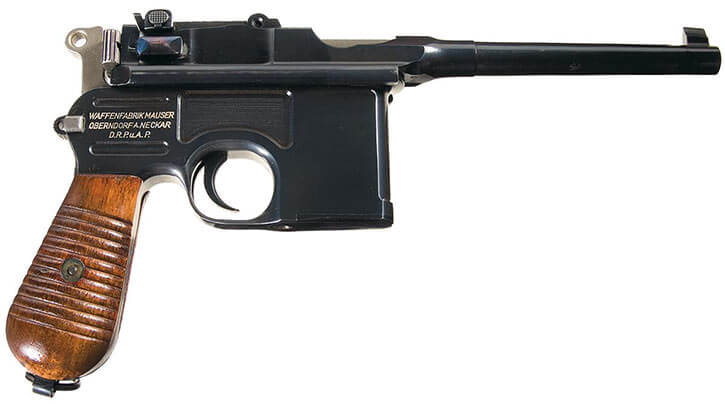 An important rifle design from 1893. It’s a five-shot bolt-action rifle reloaded with a stripper clip and shooting the high-velocity 7mm Mauser round.

When American soldiers armed with older weapons ran into Spanish soldiers equipped with the Mauser they fared very poorly. Thus incident helped phase out the US military’s habit of using older guns.

One of the advantages of the Mauser is the use of smokeless gunpowder. This tech was originally deployed by the French in 1884 for their Lebel rifle as the poudre B. Which was short for “white powder” as opposed to the traditional black powder.

It allows for a more powerful (and thus more accurate and longer-ranged) round. Furthermore, soldiers can keep on shooting without disappearing in a white, acrid cloud.

DCH Spanish Mauser [BODY 04, Projectile weapon: 06, Ammo: 05, R#02, Misc.: an Automatic Action is needed to ready the next round by working the bolt].

M&M Spanish Mauser [Ranged Ballistic Damage 5, Quirk (a Move Action is necessary to ready the next round by working the bolt].

It is a bolt-action .30 Army rifle employing smokeless powder cartridges – the first Army rifle to do so. However, Mauser designs soon made this rifle somewhat obsolete, as became obvious during the Spanish-American War.

The .30 round was outshone at long range by the remarkable 7mm Mauser. And the Krag-Jørgensen has to be reloaded bullet by bullet rather than run a stripper clip through the rifle and resume firing.

A “Krag” can be reloaded at any point – just insert fresh bullets in the integral magazine. This is useful since you can open fire immediately even if you were busy reloading.

The Krag-Jørgensen action is also reputed for its smoothness – this rifle would still be a good hunting weapon.

M&M Krag [Ranged Ballistic Damage 5, Quirk (a Move Action is necessary to ready the next round by working the bolt]. 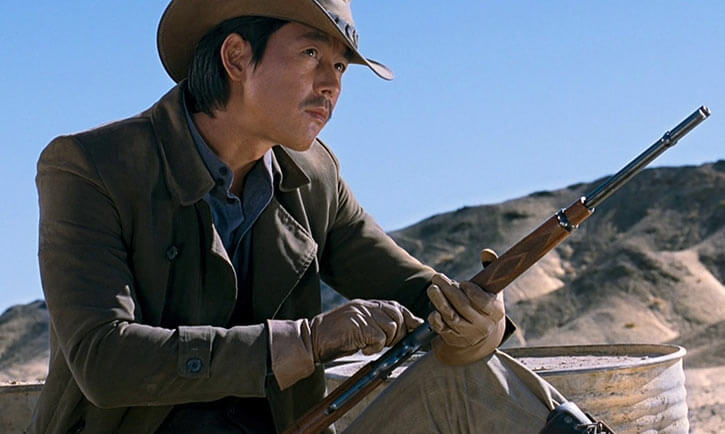 During a later review, the question of why the Colt and Remington revolvers have Rec. STR 03 in DCH came up.

That’s the assumed STR for Old West types, who are usually athletic and two-fisted brawlers.

Thus mechanically, less heroic characters end up using the EV 03 pistols. Which is a more reasonable EV for this generation of pistols.

Goons who insist upon packing a big iron (there’s a reason they say “big”) will get the STR penalty and not hit anything. Which is both more realistic and more in tune with mooks not hitting Old West heroes, even if those don’t have that high an AV.

Ideally, both the “generic Colt” and “generic Remington” would have a Rec. STR of 2.5. But even a smaller Old West hero such as Cinnamon (Kate Manser) has a STR of 03. When she punches some owlhoot, they stay punched. And she can embed a shuriken into somebody’s rib cage at ten paces. 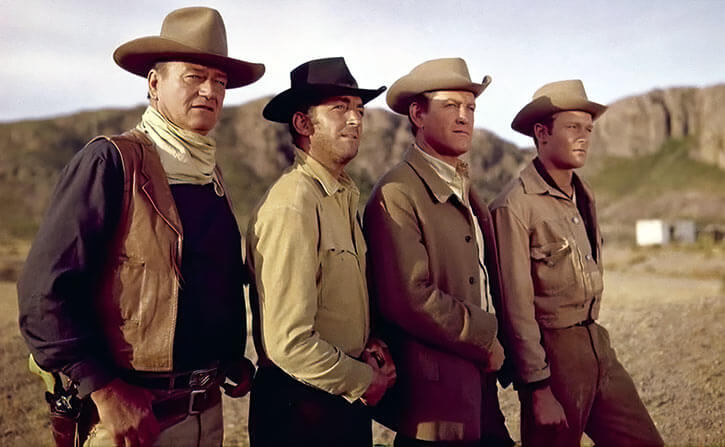 Any such thematic character, such as Hells on Wheels’ Cullen Bohannon (although, granted, his accent isn’t that pronounced !) or Jonah Hex, should receive a Role-Playing Award for using these following type of pronounciation :

This accent is often thought of as a “Southern” one, though that is not linguistically accurate. This presumably comes from of a conflation of various rural American accents with the South.

The narration of the mostly-spoken-word song The McKenzie Brothers, by the band Rednex, is a good example of diction for an Old West story. Here it is :