So this isn’t the original Kirby version of OMAC, or the ones from the mid-2000s “OMAC Project”.

This profile does not describe most events in the mini-series, to avoid spoilers.

The One-Man Army Corp is :

His lightning reflexes and perfect technique make him by far the most efficient combat machine his world has ever known. He’s also a great hero, able to make tough choices and sacrifice with great calm. OMAC has many years of combat experience.

OMAC can also communicate with an extremely sophisticated satellite called Brother Eye. Brother Eye can remotely transmit him information or manipulate nearby matter for him. One example was turning a 1930s car wreck into a functional anti-gravity one-man flyer.

When applied to OMAC, Brother Eye’s matter manipulation beams (as “electronic surgery”) can nigh-instantly make him good as new (erasing all physical damage) or transform him back from Buddy Blank to OMAC or vice-versa. Organic matter in close vicinity to him at this moment will be incinerated, so caution is necessary.

In the future of another world, the Global Peace Agency had a plan to keep peace in a world that couldn’t afford violence. It was a super-weapon called OMAC, the One-Man Army Corps, a super-man who could handle any threat. After lengthy, non-partisan searches, the GPA unilaterally selected a young nobody named Buddy Blank to be the alter ego of OMAC.

Brilliant doctor Myron Forest was one of the technical engineers for this plan. He created the linchpin of the OMAC project. Thus was a super-intelligent, ultra-sophisticated orbiting computer called Brother Eye. Brother Eye remotely turned Blank into OMAC and informed him of his new mandate.

OMAC soon become the major hero of his world, although. He most often fought in the great metropolis called Electric City. Among other threats, OMAC defeated :

OMAC moves in an extremely confident, calm and precise way. The bottom illustration with the mohawk is his early look, which he later restructured to the look depicted in the top illustrations.

A warrior-hero. Tough, collected, calm, often regretting the amount of destruction he must inflict in the pursuit of peace, and heedless of his own pain.

A sane, solid and responsible man, OMAC is a protector of the common people. Even though he is a hardened warrior his heart is always in the right place. He regards Brother Eye as a highly efficient partner, and trusts him completely.

OMAC is also very self-sufficient, notably on an emotional level.

OMAC is deeply involved in time travel and paradoxes. He might eventually slip from his Elseworld  timeline to the DCU one. He is an interesting character in scenarios where the PCs operate in a parallel timeline. Especially an utopian Gernsback -style future, or a post-apocalyptic one.

As far as we know, OMAC does not exist in the future of the DCU Earth. However, it has not be proven he does *not* exist, and having him pop up would certainly be interesting.

If he does indeed exist in the DCU’s future, OMAC is the perfect occasion to stage your own personal Terminator re-run on the PCs. OMAC (and Brother Eye) would chronoport in to destroy a man destined to become a terrible evil warlord or wicked insane genius. Of course, you could always have a comparable but less-cliché story line :-).

It is entirely possible, nowadays, that OMAC exists on one of the 52 Earths that constitutes the modern DCU. He is generally compatible with timelines implicating a “great disaster”, which was an element of numerous pre-Crisis DC stories that are known to have migrated to parallel Earths.

Drawbacks:
Alter Ego (Buddy Blank has all stats at 03, no Powers, no Equipment, no Advantages and no Skills. OMAC will revert to Buddy if he loses his link with Brother Eye) ; Attack Vulnerability (-2CS RV vs blades and bullets).

Equipment:
UPLINK WITH BROTHER EYE [Self-link (scrambled Radio Communication): 20. Activating the Uplink takes one Phase, and allows OMAC to access Brother Eye. Brother Eye can give advice, or can confer one of the following Powers to OMAC : Chameleon: 03, Flame Being: 10, Matter Manipulation: 18, Regeneration: 15. Note that Flame Being can only be used along with Regeneration, Chameleon or Alter-Ego, and must be used in such instances].

Drawbacks:
Brother Eye is a satellite. 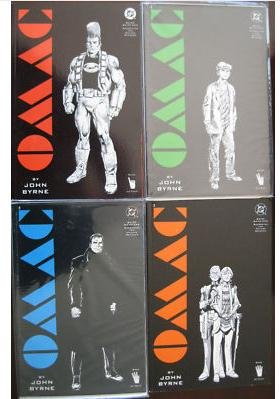