Omega is a large android with superhuman strength and durability. At his base size of 15 feet Omega is capable of withstanding repeated superspeed ramming attacks from Quicksilver, only being staggered at most.

He is also extremely resistant to heat-based attacks. This was demonstrated by the Human Torch (Johnny Storm)’s inability to damage the android with his flames.

When attacked by Inhumans who had any animosity toward the Alpha Primitives, Omega can channel that energy into increasing his size. This provides a concomitant increase in his strength and durability. This ability is powerful enough to absorb attacks as powerful as Karnak’s weakness-exploiting strikes and Black Bolt’s voice.

It is also Omega’s vulnerability, as he shuts down when the Inhumans cease their battle against the Alpha Primitives.

Imprisoned for his misdeeds, the insane Inhuman Maximus occupied his time tinkering with what he claimed was a useless whirligig. That seemed intended as an insulting metaphor for his brother Black Bolt. While the device appeared harmless, the Inhumans nevertheless asked Reed Richards to determine its purpose.

Before Richards could arrive, Attilan began suffering earthquakes originating in the foundations of the city. Simultaneously the Inhumans’ servitors, the Alpha Primitives who lived in those same depths, began an open rebellion.

The Inhumans eventually drove the Alpha Primitives back into their subterranean homes. They had taken Crystal hostage, so Quicksilver and the Human Torch pursued them. In the depths the two men encountered the giant android Omega, who declared his allegiance with the Alpha Primitives.

Omega demanded that they join in him in crushing the Inhumans or Crystal’s life was forfeit. Both initially surrendered, but a battle quickly broke out between them and the android nevertheless.

Crystal, Quicksilver and the Torch escaped the fight and returned to Attilan. Omega and the Alpha Primitives quickly followed and resumed their war against the Inhumans. Omega was the focus of the Royal Family’s attacks and only grew larger with each one.

Even the Inhumans’ attacks against other Alpha Primitives fed Omega’s growth to some degree.

Reed Richards finally arrived and spied on Maximus. Determining the machine’s role in events, Richards and the Thing attempted to destroy the device. However, they were stopped by Crystal. Her elemental powers had somehow allowed her to sense the nature of Omega’s abilities. 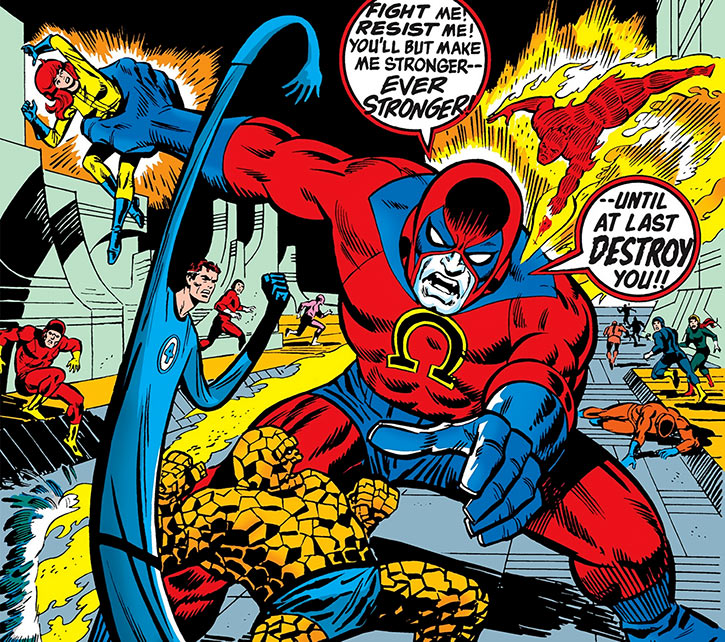 She then realized that destroying the machine would not solve the underlying problem. With Richards’s help, Crystal stopped the conflict long enough to explain. She told the Inhumans how Omega was powered by their own subconscious guilt over the Alpha Primitives’ enslavement.

When the Inhumans acknowledged their mistreatment of the Alpha Primitives and ceased fighting, Omega was rendered powerless. The Alpha Primitives silently accepted the truce and retreated into their catacombs. What was once a forced prison had now become a home freely chosen. Omega himself remained a motionless statue, a reminder to the Inhumans of the dire consequences of their racism.

Though Omega never returned to plague the Inhumans, Maximus would use the android’s body in the construction of Ultron-7.

Omega appears to be a giant White male with elongated incisors.

He wears a red body suit with cowl and accessorized with blue trunks, mid-length gloves, and boots. The cowl has a blue domino-mask pattern over Omega’s eyes and a golden yellow omega symbol is emblazoned upon his chest.

When exerting himself or being struck by powerful attacks, Omega sometimes seems to glow with a yellow nimbus.

A reflection of the anger and prejudice that powers him, Omega is aggressive and arrogant. He disparages his foes and gloats over his puissance in a haughty, verbose manner.

If the Inhumans have been integrated into the campaign, Omega would likewise be included.

If the Inhumans are not present, Omega could be a creation of Professor Ivo. In collaboration with Dabney Donovan, Ivo created Omega to battle alongside some of Donovan’s monstrous DNAliens in an attack on Project Cadmus.

During the fight, Omega fed off of their enemies’ subconscious disdain for the attacking DNAliens. Dubbliex realized where Omega’s powers were coming from. He ended the attack by offering to accept the new DNAliens into Cadmus as friends.

Touched by this offer from one of their own in contrast to Donovan’s brutal dominion over them, the new DNAliens accepted. Omega was rendered inert.

Another possibility is that Omega could be the creation of military researchers influenced by Ares, much like the Annihilator in the animated JLU episode “Hawk and Dove”. In this case, his Damage Absorption could absorb attacks from anyone with aggressive intentions toward him.

This would cover most attacks against Omega, barring inventive measures on his opponents’ part such as controlling their own aggressive impulses. GMs might wish to look at the Star Trek: The Next Generation Episode “Gambit, Part II”  for inspiration. It featured a psionic artifact called the Stone of Gol that operated under similar restrictions.

Also, Omega would only shut down when everyone in the area ceased having aggressive feelings.

“Bow before me, spineless scum that you are ! Bow before the power that is — Omega !”

(After absorbing numerous powerful Inhumans’ assaults) “If that is the extent of your powers, Inhumans, then the destiny of the Alpha Primitives is written in the stars this night — aye, in stars most friendly !!”

Drawbacks:
Miscellaneous (Omega is rendered inert if the Inhumans cease oppressing or attempting to oppress the Alpha Primitives, as sensed through his Empathy).

Equipment:
MAXIMUS’s MACHINE [BODY 12, Empathy: 08, Telepathy: 13, Advantage – Miscellaneous (As long as this device is active, Omega can absorb 1 RAP of damage inflicted on the Alpha Primitives by Inhumans per phase as it had been gathered through his Damage Absorption Power), Bonuses & Limitations:

Note:
The story is unclear regarding how much of Omega’s abilities are innate versus being powered by the machine. It is suggested that he could be awakened again should the Inhumans’ prejudices reemerge. Even though Maximus’s device was presumably deconstructed after the events in question.

I have assumed that Omega’s ability to absorb direct attacks was innate while the machine was responsible for gathering indirect energies for the purposes listed above.

Normally I would rank the first Damage Absorption Limitation and the second Empathy Limitation much more strictly (-3FC) given how narrow they are.

But given the circumstances Omega appears in, these Limitations are not as debilitating as they normally would be. 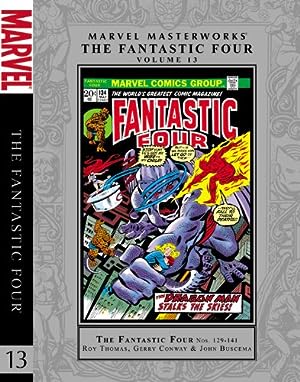 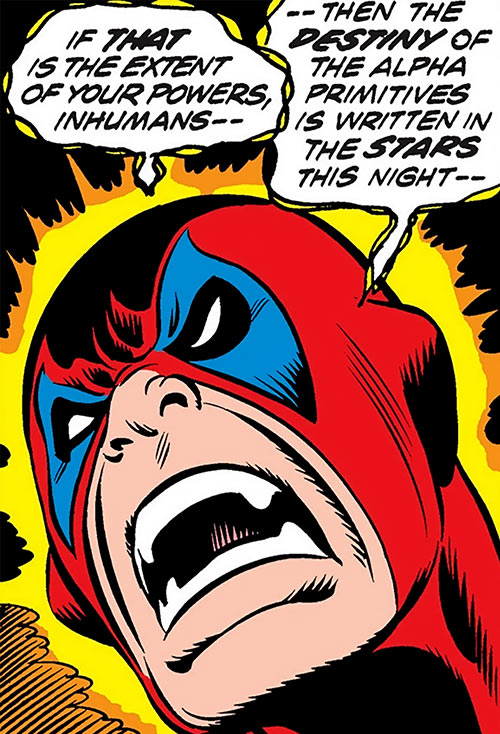