Omega is the sum total of all the hatred in the universe. It is a giant energy construct created by the genius of Brainiac 5 using the power of the Miracle Machine. The aura of hatred and menace around him is palpable. It’s not enough to frighten off any hero, but enough to make them distinctly uneasy (in DC Heroes RPG terms, Aura of Fear).

Tremendously powerful, even stronger than Validus of the Fatal Five, Omega is among the deadliest of Legion foes. Only the Sun-Eater and perhaps Darkseid are mightier than Omega. It is strong enough to knock a Daxamite unconscious with a single blow (in DC Heroes RPG terms, STR), and able to take Mon-El’s best punch or Wildfire’s full energy release without flinching (BOD).

Omega is also able to travel at hyper-light speeds (Flight), though he appears somewhat slower than Superboy or a Legion Cruiser. When flying, he stands up straight and walks, seeming to be striding slowly and implacably. But his strides carry him across light years.

The chronology of the Omega storyline is strange. It is published after Wildfire steps down as Legion Leader and Lightning Lad takes over, he and Saturn Girl having just returned from their honeymoon and their short-lived retirement. But in this story Lightning Lad and Saturn Girl are nowhere in evidence and Wildfire is clearly in charge.

As it happened, the story was originally to be published in a Legion Special, outside the original title. But was retooled to fit into two issues of the regular book – which is why it’s hard to fit exactly into continuity.

Promise you a miracle

During the period when Brainiac 5 of the Legion of Super-Heroes was driven insane by an illness, he became convinced that the Legion, and the universe, failed to give him sufficient credit for the many times that he had saved them all. He decided that it was only just that he be repaid by being named Leader of the Legion and ruler of the universe.

The most dangerous of his many insane actions during this period was the creation of Omega. Omega was an energy construct molded by Brainiac 5 out of his anger. It also fed on the energy of hate from throughout the universe.

Brainiac 5 created it using the Miracle Machine, a device given to the Legion by the immortal Controllers. This supposedly indestructible machine was capable of converting thought into reality. It supposedly was powerful enough to destroy the universe. Omega was created by Brainiac 5 to seek out the Miracle Machine and use it to do exactly that.

Brainiac 5 willed Omega into existence far out in space. The goal was that the Legion might have the opportunity of futilely trying to prevent it from reaching the Miracle Machine. Brainiac boasted that only he knew the secret to stopping Omega. He said that the Legion would once again be helpless against the threat without his intellect to guide them.

This proved to be true. Omega was first opposed by the Legion’s mightiest members, Mon-El and Superboy. Omega took out Mon-El with a single punch, knocking him unconscious and giving him a severe concussion. Superboy retreated to gather reinforcements.

The Legion set up several lines of defense, including a bomb that would open a hole to another dimension. But all their efforts were useless.

The Legion pretended to give in to Brainiac 5’s demands – nothing less than being named ruler of the universe. He was crazy enough to believe them. While Legion Leader Wildfire unleashed all his anti-energy at once against Omega – creating an explosion that leveled LSH Headquarters but left Omega unharmed – Brainiac 5 had ex-Legionnaire Matter-Eater Lad brought to Earth.

Matter-Eater Lad consumed the not-quite-indestructible Miracle Machine, though its alien energies drove him mad as well. Deprived of its power source, Omega ceased to exist.

Omega is a giant yellow-orange energy being, hairless, with glowing red eyes and red flames crackling around his head.

Omega is more a construct or a program than a balanced personality. He literally has a one-track mind, filled with hatred for the Legion and the universe. Brainiac 5 created him with a compulsion to seek out the Miracle Machine and use it to destroy the universe, and he pursues this goal implacably.

He talks in grandiose terms about his power and hatred and how helpless others are against him. He also is given to talking gloatingly and obscurely about his “secret”. This refers to the fact that he was created by the Miracle Machine, and that it will give him the power to fulfill his threat to destroy the universe.

“Your mind is too feeble to encompass the true concept of what I am, mortal ! I am death…destruction…the end of everything you know and love in this universe ! I am the sum total – the very living embodiment – of all the hate that ever has existed ! And I will be the fulfillment of that hate… for I am Omega… and of all the creatures in this cosmos, it is you Legionnaires that I hate the most !”

“That’s it, mortals, run… run from Omega… while you can. Soon there will be nowhere to run !”

“Stand aside, Legionnaires, and you may have a few more moments of life. If you continue to hinder me, even those brief breaths shall be forfeit.”

“At last – the goal of my existence is before me ! Legion Headquarters – where he who gave me form dwells – and where is hidden the secret that will enable me to end eternity !”

“You learn nothing, humans ! None of your powers can harm me ! I am Omega – I am hatred – and I will not be stopped !”

“Now I can get what I came for – the secret that gave me form – and that will give my hatred its ultimate revenge ! Now I shall use the Miracle Machine – and end all life !”

“NO ! It is not possible – the Miracle Machine was indestructible ! You have no science to destroy it ! But you have done it – you have – I can feel it ! I am losing substance – dissolving – fading into the hundred billion trillion hatreds of all who live – my power – you have destroyed my power… Noooooooo…”

This writeup is for a Pre-Crisis character who has been reduced to a Post-Crisis scale. The writeup also assumes that Superman’s base DEX is 10, not 15 (though it can be enhanced via Superspeed).

We never see Omega attacked by a telepath, but we do see evidence that his Mind isn’t extraordinary. Projectra really startles him with an illusion. But given that Brainiac 5 designed Omega to be able to beat the Legion, it’s unlikely that he would leave Omega vulnerable if Saturn Girl were on the team at this point. So I added Iron Will and Mind Field, and Magic Field too, purely on the basis of this speculation, that Brainy willed Omega to be as unbeatable as possible.

Invulnerability is also speculative, but seems to fit the concept – he lasts as long as hate is around, or the Miracle Machine is destroyed.

Source of Character: Pre-Crisis DCU (Superboy and the Legion of Super-Heroes 250-251). 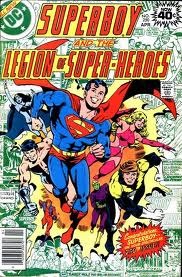 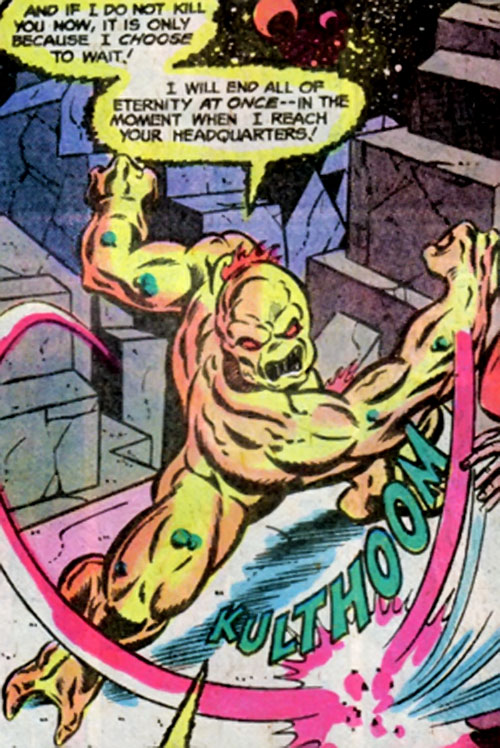