Onyx is a well-trained, talented martial artist. She is quite accomplished with numerous weapons – though she prefers the bullwhip. She also masters several unrevealed unarmed styles.

However, she’s just a kid, and a sheltered one to boot. Her skills are not backed by experience or killer instinct. As a result, she’s out of her depth against proficient killers.

At this stage Onyx has no real world experience (in DC Heroes RPG terms Innocent, Exile, Socially Inept). That makes her a particularly awkward adventurer.

Onyx’s past is a mystery. Her parents were apparently killed when she was a little girl, but she escaped alive. Somehow, she reached an ashram near Star City. The monks took her in to save her life from the unidentified men hunting her.

For her protection, the monks never used her real name and called her Onyx – presumably because of her dark skin. She grew up as the sole nun at the ashram. As a little girl, she may have crossed paths with Oliver Queen during his early stays there. One can imagine that she knew his son Connor Hawke.

Welcome to the cruel world

When Onyx was 16, the dying abbot tasked her with finding Oliver Queen. The holy man had been poisoned by a student named Lars, who wanted to steal relics from the ashram. Though Lars had convinced other students to serve him, the abbot knew Lars couldn’t have turned Onyx against him.

However, Onyx had no experience of the outside world. Furthermore, she was still scared that the assassins would find her.

The youth needed somewhere to sleep while she quested. She feigned passing out in front of the Sounds Okay records shop, hoping they would take her in. This surprisingly worked as the clerk, a somewhat creepy kid named Tommie, was smitten with the ravishing Onyx. He let her sleep in the back room.

Predictably he tried to hit on her, but Onyx completely missed the subtext.

One of the addresses the abbot had given her was indeed where Queen lived. He immediately agreed to help Onyx. However, by the time they came back, the monastery was under Lars’ control. The rogue monk swiftly defeated Onyx and captured her. As Lars suspected one of the two artefacts he sought, the Wisdom Key, was hidden in Onyx’s tiara.

Lars rushed to use it to unlock the ashram’s Book of Ages. Meanwhile, Green Arrow freed Onyx from his deathtrap. Merely opening the Book killed Lars on the spot, leaving but a skeleton.

Lars’s followers used alchemical secrets to reanimate him. Lars was now a skeleton and needed the Book of Ages to remain animated. However, the Wisdom Key could eliminate that dependendy. Thus, he hunted Onyx down to get the Key.

Not knowing what to do, Onyx ran to town. She hid in the basement of Sounds Okay, hoping to remain undetected and living as a vagrant. Tommie eventually discovered her and decided to force the issue. He did not listen to Onyx’s abstruse and melodramatic explanations about the situation.

He managed to steal a kiss from the confused girl. But the skeletal and armoured Lars — now calling himself Barricade — came crashing through the wall to take the Key. Onyx slipped the Key into Tommie’s pocket. The lad ran away, swearing that he would come back to help. Barricade easily defeated Onyx.

Tommie never came back, of course. Onyx, still living as a vagrant, looked for him through town to recover the Key. He gave her the Key back and the na&iuml:ve Onyx, disillusioned that he hadn’t kept his promise, bitterly left. One assumes that she returned the book and the key to the ashram.

In 2001, Onyx was briefly seen among the all-women army that Wonder Woman assembled to retake New York City from Circe. Though that was well after the Crisis (and Zero Hour, for that matter), later appearances by a different, post-Crisis version of Onyx make this appearance difficult to explain.

During the battle, the katana-wielding Onyx was apparently felled by the telepath Axis.

In hindsight, it is possible that this person was a Hypertime  echo of some sort.

Onyx is just a kid – and a very sheltered one. She grew up scared and is socially well-meaning but clueless. It is likely that she was mostly isolated from the male monks at the ashram.

She has next to no experience with ordinary life, and doesn’t really know what to do. She is unusually naïve and confused when it comes to social interaction.

Her words are often melodramatic and unclear as she affect an air of mystery and destiny. This is presumably to protect herself and out of juvenile excitement. She tends to come across as both awkward and formal, like some fantasy princess from a bad novel. Her attractiveness seems mostly embarrassing for her. She’s defensive about it.

Onyx seems to have been traumatised by the death of her parents. Thus, she often prefers to flee from opposition out of a paranoid sense that “they” are after her and will kill her like they killed her parents. Yet she never talks about it, so seeing her suddenly run scared can be surprising.

As she grew up she gained backbone. Though her first reflex remains to flee, she’ll stand and fight if she finds herself with her back against the wall – or if innocents are getting caught in the fray. In her later appearances she was fighting hard and smart, too, clearly hinting at an excellent potential.

“Do not touch me ! We are strangers… we will remain so !” (aikido-throws an enterprising pimp away in the thrash)

“The man known as the Exalted Master instructed you in the ways of the East. He took me in… and became my teacher. He taught me how to fight – and what to fight for. It was he who sent me to find you… in the bleak hour of his greatest need.”

Source of Character: Chiefly back stories in Detective Comics during the mid-1980s (DC Universe).

Writeup completed on the 1st of September, 2010. 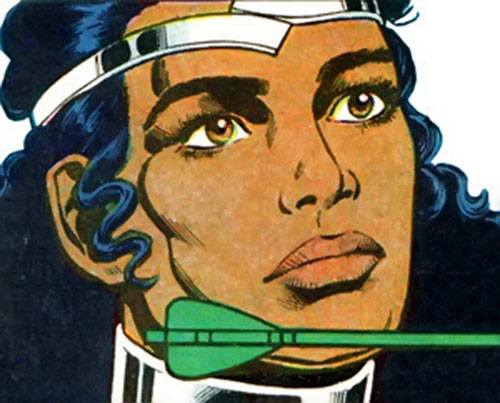 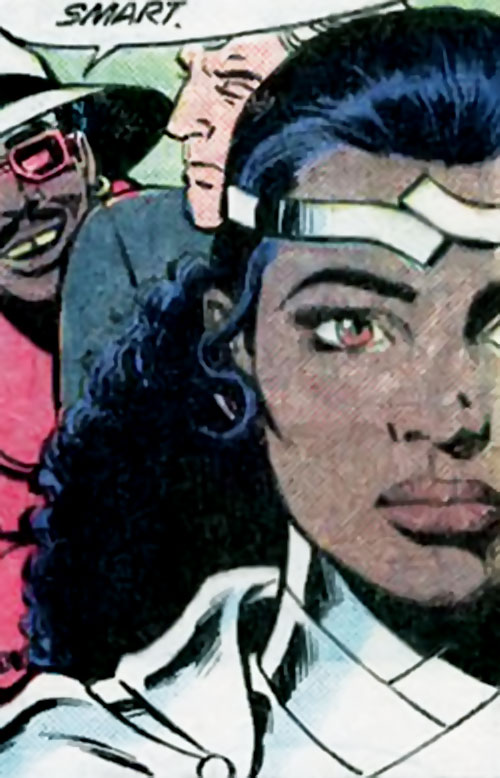