Optilux used to be an accomplished, polymath alien scientist. His main expertise and genius is in optics, where he has made significant discoveries. He is the most prominent scientist currently on Earth within this field.

After he managed to change himself into living light he became very powerful. Optilux can bend light to many purposes.

Discovering a process that would convert matter into light, scientist Voran Glynn of the planet Sarto first turned himself into pure radiance. He then developed a messiah complex, vowing to transform the entire material Universe under the name Optilux, meaning “perfect light”.

The planet Amalynth was his first conversion, and was followed by two more planets. These planets were trapped into refractive prisms (such as the Prism world of Amalynth).

He appeared to commit suicide in 1969 on Earth. But what he actually did was to turn into living light, which made him incredibly powerful.

He turned up again in the 1990s to buy the soul essences of all of the 1960s superheroes from Hulver Ramik. This trade was spoiled, though. Then Optilux’s light was trapped in super refractive glass, that light takes decades to pass through, by Supreme.

He is currently placed next to the Prism world of Amalynth, Optilux’s greatest achievement, in the Citadel Supreme.

Voran Glynn was a bald, alien scientist in an otherworldly costume. It had a head band, shorts outside his trousers, a girdle, thick necklace, long gloves, high boots, and a light-based motif on his chest. The overall style was similar to Kryptonian clothing.

As Optilux he can choose to appear as his old self, but made of brilliant light. Or he can appear to be a miniature sun.

Optilux is an insane, alien scientist with a messianic complex. He believes that life in its purest form is pure light and radiance, and thus attempts to “free” mankind by transforming all of them into pure light. His long-time goal is to transform the entire matter-based universe into light. His famous credo is: “We must all become as light !”

Optilux is a confident and eloquent speaker. He will attempt to speak to the masses, for example at a rock concert, after which he will start turning them all into light. He is resolute in his beliefs, which he himself believes are spiritual in nature and therefore enables him to perform acts of questionable morality for the greater good.

Optilux is very proud of his creations and his accomplishments, such as the Prism world of Amalynth, once an alien world, now turned into light and kept inside a prism. Thus, it is possible to extort him by threatening to destroy one of his brightest creations.

“We must all become as light.”

“I’ve imagineered this device, called my Rapture Engine, to transform the entire material universe into the sublime ethereal luminance that I am myself already become. Now, I think that’s a highly spiritual motive.”

“Greetings, Supreme. I am made incandescent to meet with you again. Come…  what have you to say to me ?”

Optilux is a apparent homage to Silver Age Superman’s classic foe Brainiac. Thus, use either the Silver Age DC Universe in its entirety or Moore’s Supreme Universe, possibly as a parallel world, with its small differences and twists of these classic characters.

Drawbacks:
CIA (Converting everything to light).

Equipment:
Photoplasmic Converter Gun [BODY 04, Dimension Travel (Banishing): 40, Bonus: The gun can be held and used by intangible characters made of light (or Dispersed) (15 pts), Limitation: Dimension Travel can only be used to banish people and objects to another dimension made entirely of light, where everything instantly changes into pure light as well, just as Optilux himself has already done (-1), R#2].

Optilux’s physical form actually resides permanently in another, parallel dimension. His form in the real dimension is projected as pure light in humanoid form and shape, which also gives him access to all his powers. Sometimes he presents himself in the shape of a small, brilliant sun.

It appears to be possible to mentally damage Optilux when he manifests himself in some physical (Energy Blast) or mental manner (Illusion), and although this weakness is not detailed, it is left up to exploitation by GM fiat and Trick Shots under given conditions.

The exact limits of his powers have never been shown and it is possible that he is even more powerful than what is described in the Powers section. It is very likely that he has access to further not-yet-seen light-based powers as well.

The effects of such powers would be expected to range from 10 to 20 APs. Such undiscovered powers might be treated as Omni-Power, although limited to effects clearly derived from light in some way.

Since Optilux actually appears to become more powerful by each appearance, it is advised that any such newly appeared power becomes part of his permanent Powers in later appearances. 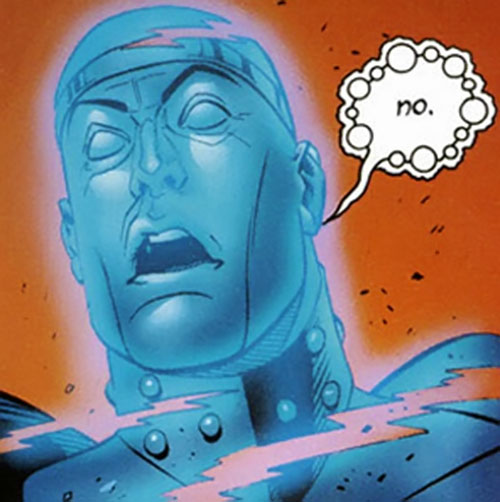 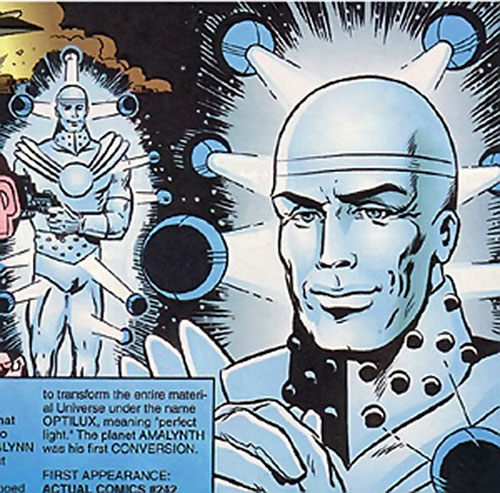 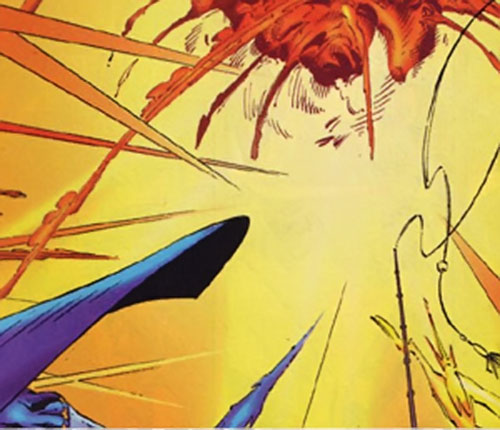