Optimus Prime is without a doubt the most popular character from the Transformers franchise. He has appeared in virtually every iteration of the series (in one form or the other), and always epitomizes the iconic heroic leader.

Optimus Prime is the strongest of the first generation Autobots.  He can lift weights in the “Class 75” range, is virtually invulnerable and is immune to all forms of human frailties (i.e. aging, sickness, disease, hunger, fatigue, etc.).

As a Cybertronian, Optimus is extremely hard to kill. Even if he was smashed to pieces, it would be possible to revive him after his artificial body was repaired. For instance, he has survived having his head separated from his body for weeks.

As a Transformer, Optimus can transform his body into a secondary form for the purpose of disguise. Optimus’s alternate form is that of an 18 wheel transport truck – a Kenworth K100 cab over . While transformed, he retains his intelligence, capacity for speech and mobility.

Optimus is a combat veteran of Cybertron’s 1000 year war. He has participated in numerous military operations where he gained vast experience as a soldier, strategist and leader. He is a seasoned melee fighter and uncanny marksman. In battle, he wields a mammoth laser rifle whose destructive potential is only matched by Megatron’s fusion cannon.

The Autobots evolved on the planet Cybertron millions of years in Earth’s past. They turned their home into a mechanical paradise and lived in peace for centuries. This peace lasted until Megatron came into existence.

Megatron preached to anyone who would listen about war and conquest. As the years passed, the number of Autobots that embraced his ideology grew. They prepared for war in secret, while their brethren continued to go about their day to day life.

When they were ready, Megatron’s followers (the Decepticons) attacked their former brothers. The once peaceful Autobots defended themselves to the best of their ability. Thus began a conflict that would cover the entire planet and last for years.

Over time, the planet broke free from its orbit around their sun, but the war continued. The Autobots suffered severe casualties as a result of the fighting. Their defeat seemed inevitable until Optimus Prime assumed command of their army. 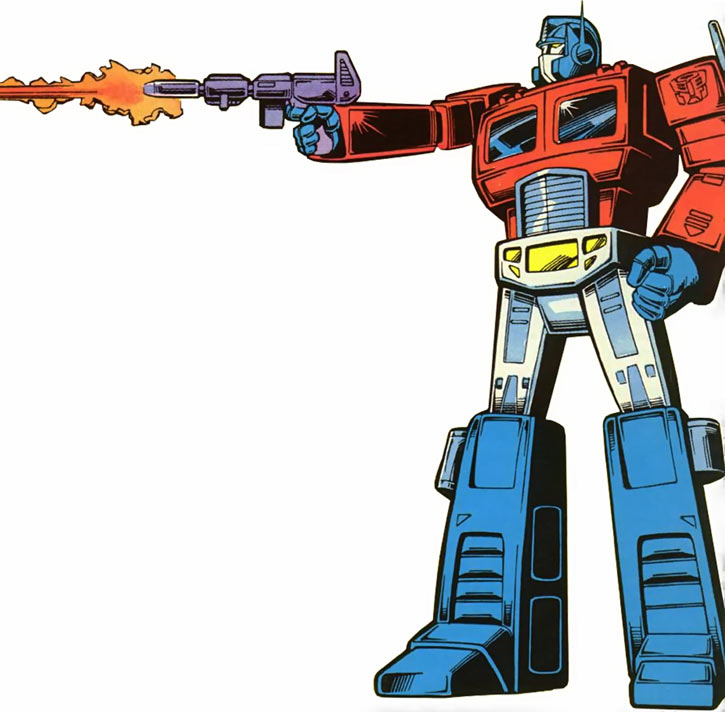 The Decepticons routed the exhausted Autobots with ease, leaving Optimus with a single choice. He set their ship (the Ark) on a collision course with the nearest planet.  The Ark crashed into the planet (Earth) with the force of a large meteor, killing all that were aboard.

The Ark lay inert under Mt. Saint Hilary  for millions of years.  This changed in 1984, when the volcanic mountain finally erupted. The eruption awoke the Ark’s main computer which launched a drone.

It started to gather information about the planet’s lifeforms to send back to the Ark. The damaged drone assumed that the machinery it encountered were sentient life. The Ark rebuilt all the Cybertonians onboard in the image of the machines that the probe sent.

The Decepticons fled upon their awakening, while Optimus sent a team to search for fuel. The Autobots encountered their first humans at a drive-in theater. The Decepticons attacked the theater to prevent the Autobots from making new allies.

Buster Witwicky found an injured Autobot (Bumblebee) at the conclusion of the battle. He took Bumblebee to his father’s garage where Sparkplug repaired him. Sparkplug offered to manufacture the fuel that the Autobots needed after hearing Bumblebee’s story.

Optimus went to retrieve Bumblebee after receiving news of Sparkplug’s offer. Unfortunately, Optimus didn’t realize that the Decepticons had been watching. The evil machines attacked once more and managed to capture Sparkplug.

Despite their lack of fuel, Optimus led a team of Autobots to rescue Sparkplug. With some help from the American armed forces and Spider-Man, the mission was a success. Unfortunately, the rescue all but depleted the Autobots’ fuel reserves and Sparkplug got hurt.

Before falling unconscious, Sparkplug revealed that he gave Megatron the secret to creating fuel. Optimus knew that Megatron would attack immediately after refueling. Left with little choice, he returned to the Arc and siphoned fuel from all but four of his fellow Autobots.

Only the Autobot medic Ratchet avoided the siphoning as he had taken the humans to the hospital at the time. Shortly after the process was complete, the Decepticons attacked. Despite their refuelling, the Autobots still lost.

Before the Decepticons could kill their foes, they fell writhing to the floor. Sparkplug had included a corrosive material to the fuel he gave them. It destroyed the Decepticons’ fragile interior components.

Shockwave entered Mount St. Hilary and with a single blast defeated the Autobots.  He then used the Ark to repair the Decepticons and declared himself to be their new leader.

His first order was to remove Optimus Prime’s head from his body. He wanted to extract the Creation Matrix from Optimus. It was a software program that allowed the Autobots to reproduce.

Shockwave’s plans were temporarily derailed by Megatron’s resurgence and the arrival of the military. Buster Witwicky used the distractions to sneak into the arc after returning with Ratchet. Optimus, seeing Buster, enacted a desperate plan. 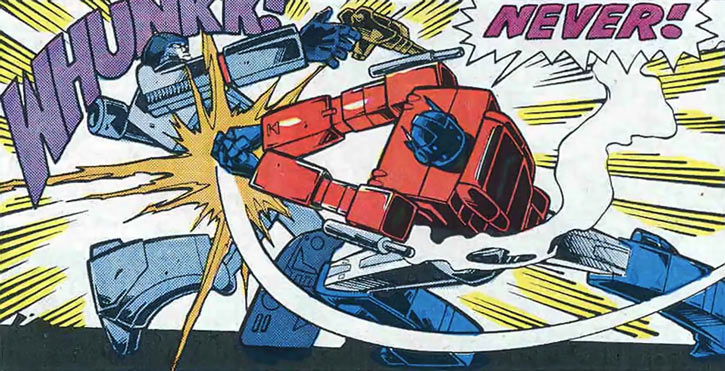 Optimus convinced Buster to connect himself to his disembodied head. As soon as Buster complied, Optimus transferred the Matrix to him. Confused by the transferal, Buster slipped away before Shockwave could return.

Soon thereafter, Ratchet stole into the Ark after returning Buster to his home. He too sought out Optimus, who convinced him that he was strong enough to free his friends. Ratchet, inspired by Optimus, enacted a plan that resulted in Megatron’s defeat.

With Megatron gone, Ratchet returned to the Ark only to find it empty. The Decepticons had abandoned it in favour of a nearby assembly plant. It was there where Shockwave planned to use Optimus to bring his army to life.

Shockwave’s initial effort was successful. He used the remnants of the Matrix to bring the Constructicons to life. His second attempt was an utter failure though.

After minutes of thought, Shockwave concluded that Optimus had sabotaged his efforts. He discovered Optimus’ gambit after reviewing footage that one of the guards recorded.

Shockwave sent Jetfire (the failed experiment) to capture Buster when he located him. But, Buster and the Autobots captured Jetfire instead. They then set out to rescue Optimus. They planned on using Jetfire as a Trojan horse and Buster as the bait.

Unfortunately, the plan failed when Buster lost consciousness. Without Buster to control it, Jetfire gave the unconscious boy to Shockwave. Shockwave immediately set to work integrating Buster into his assembly system.

To stall for time, he sent Jetfire with a replica of Optimus’ head out to the Autobots that gathered outside. The Autobots took the replica and immediately attached it to Optimus’ body.  With the Autobots’ guard down, the false Optimus attacked.

It had all but defeated them by the time the remaining Decepticons joined the fray. Meanwhile, Buster awoke within the assembly plant. He assessed the situation about him and leapt into action.

Using the power of the Matrix, he seized control of Jetfire once more. At his command, Jetfire floored Shockwave with a single blow. Then in one fluid motion, the automaton grabbed Optimus’ head and flew off into the sky.

Jetfire flew straight towards Optimus’ body. When he was close enough, the true Optimus Prime seized control of his body. It tore off the false head and moments later, reaffixed the true Optimus’ head upon its shoulders.

For the first time in days Optimus was free, whole and angry. He turned his righteous rage upon the Decepticons who had been assaulting his allies. In moments, they were all reduced to scrap.

Shockwave chose that moment to attack, but without the element of surprise he was no match for Prime. The two struggled briefly, before Optimus threw Shockwave into a bog.

Optimus ignored the advice of his allies to finish Shockwave off. Instead he raced back to the assembly plant to free Buster from Shockwave’s machinery. Once Buster was free, Optimus reclaimed the Matrix from him. He then renewed his vow to never put a human in danger again.

Optimus is a massively built, semi-humanoid robot. He stands somewhere over 20 feet tall, has a thick barrel-like chest and long powerful legs. His chest plating is a bright red colour, while his hands, feet and head are dark blue. Where one would expect his pecs to reside, two clear windows (resembling the windshield of an Earth transport truck) can be found.

Optimus’ head resembles a large blue helmet. His artificial eyes are a bright yellow and he has no visible mouth, ears or hair. Two long antennas spring upwards out of his head where one would have expected his ears to reside.

Optimus Prime’s personality is epitome of what one would expect to in a typical heroic leader character type. His personality takes the best traits of characters like Captain America, Superman and Cyclops and fuses them into a single being.

He is kind-hearted and friendly, and desires nothing more than to live a peaceful existence amongst friends. Where others see opportunities for conquest, he sees opportunities to build bridges. Where the Decepticons seek conflict, Optimues sues for peace. He will explore any and all options for non-violent solutions to problems before resorting to force.

Unfortunately for his foes, when Optimus does pursue violence he is exceptionally talented at it. He is fierce and courageous, and will not stop fighting for a cause that he believes in. He recognizes that he has no equal amongst his peers and thus acts like a bulwark in battle. He will seek out the most powerful foe on the field and often attempt to face them down in single combat.

Optimus feels little remorse for his foes, and is perfectly willing to eliminate them on the field of battle should it result in preventing the loss of innocent lives or an end to the conflict.

Optimus is unbelievably charismatic, especially when one considers that he is technically a machine. His strength of personality is so powerful he can spur all but the most black-hearted individuals into heroic action with nothing more than a few words.

Optimus Prime’s only real weakness is his overwhelming compassion for all living creatures. He will always sacrifice his own safety in order to protect the innocent. At times, this makes him easy to manipulate and predictable in battle.

“The humans shall not be taken — so swears Optimus !”

“How dare you endanger the lives of this world’s people ! This isn’t their war !”

“Now is the time for valour !”

“You taught me something of value today, Buster Witwicky… and that is that one human life knowingly endangered by our struggle is too many.”

Equipment:
Laser Blaster [BODY 12, Energy Blast: 16, Range: 15, R#02. Bonuses & Limitations : Wielder must have the Growth Power of at least 06 to be able to effectively wield the rifle.] 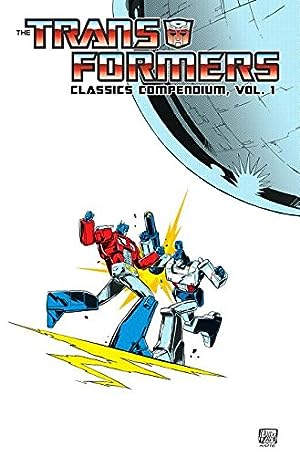 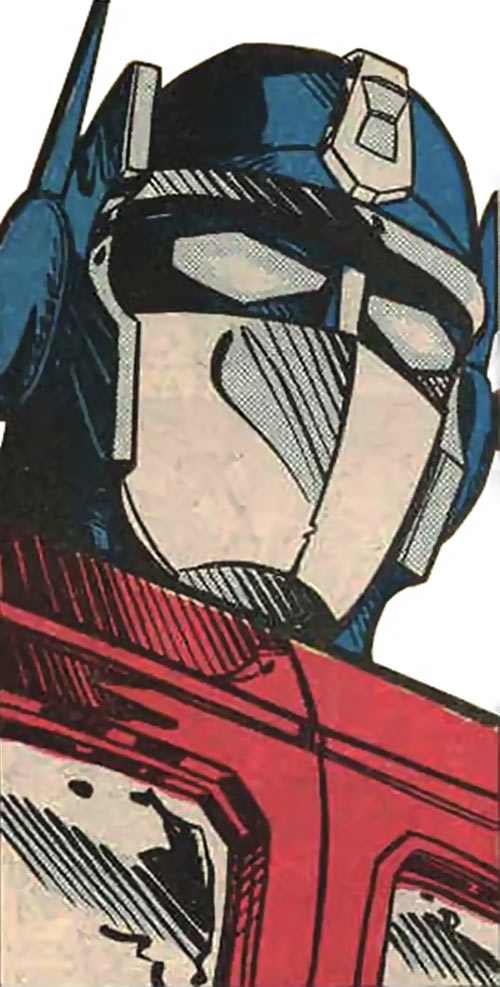 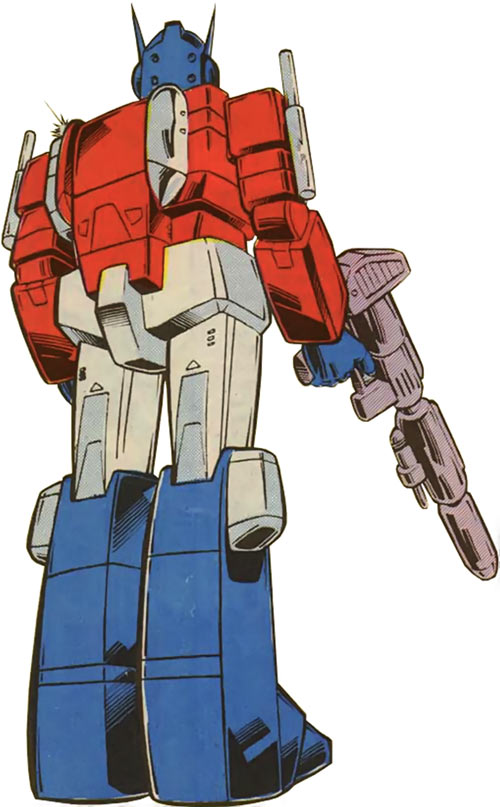 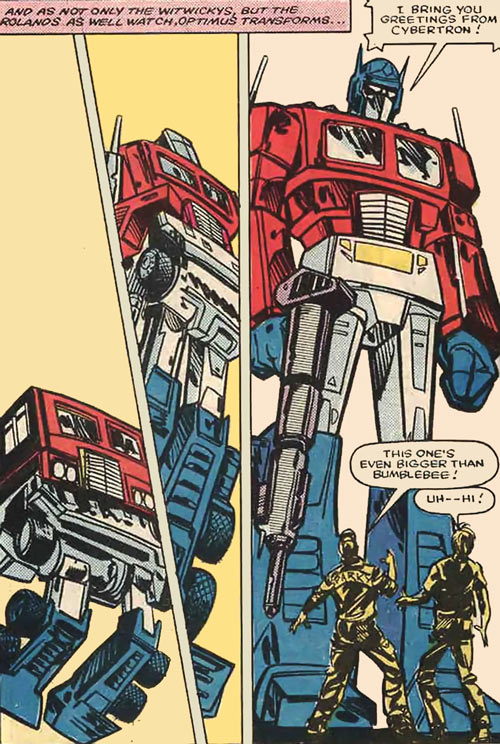 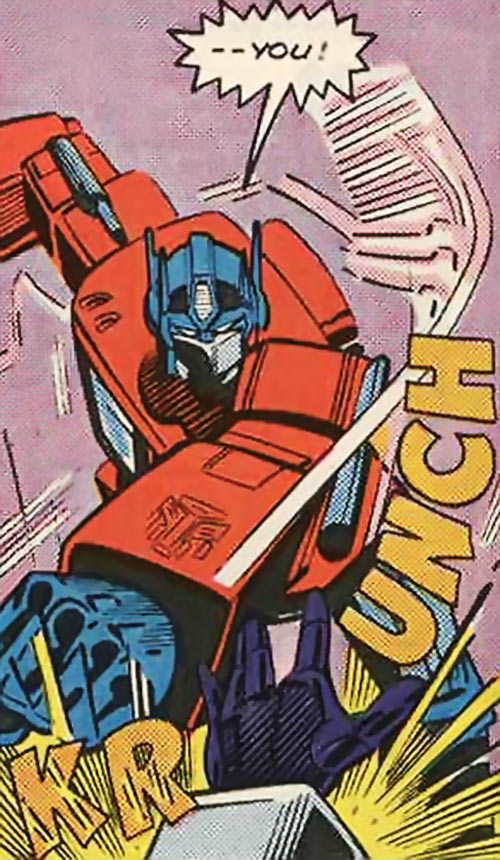 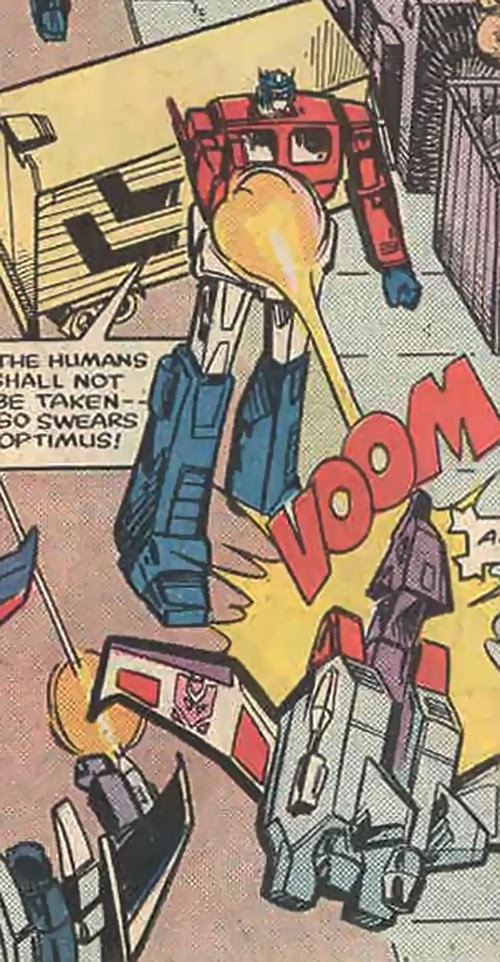