This alien species appears in the Star Trek episode “Errand of Mercy”, originally broadcast in 1967. This here profile has S P O I L E R S about this classic episode.

I just did this on the spur of the moment. I had a hankering to go back and watch the episode and, since the Organians have only one canon appearance, I decided to write this just for the fun of it.

In fact, other than the name, Organians, being dropped once during the episode, there is no similarity between what they were in “Errand of Mercy” and what they were in “Observer Effect” although both are good stories on their own merits.

There have also been a number of non-canon stories involving the Organians. Some sites mix canon and non-canon information freely without distinguishing which is which. I try to stick strictly to canon information. Beyond the Enterprise episode, there were at least two non-canon novels.

This is a generic writeup on the Organians as a species. There were only three of them that had names and dialogue: Ayelborne, Trefayne and Claymare. Their abilities were slightly different. But they could form a gestalt which was impossible to prevent so I am going with what they could do collectively.

The Squire of Gothos was a child, and other of the Star Trek “all-powerful aliens” seemed smug and arrogant. These types usually had no understanding that it took them a long time to get to their level, unrealistic expectations of others and a strange tendency to put “lesser” life forms into battle situations. Strange indeed for supposedly advanced, superior life forms.

In contrast, the Organians seemed to me neither omnipotent since they formed a gestalt of the species for many of their acts nor smug. They seemed the epitomy of what such beings should be if they existed: wise, peaceful and benevolent.

This history, by definition, includes S P O I L E R S. If you have never seen the Star Trek original series episode, “Errand of Mercy”, I strongly recommend you watch it.

The Organians were once a corporeal life form. But over millions of years, they evolved into a non-corporeal form of life possessing vast and far-reaching powers. They also developed an abhorrence for violence and of interfering in the affairs of other species.

Their hatred of violence extended not just to not causing harm themselves but to allowing harm to come to others. Especially if they were indirectly the cause of it.

For reasons unknown, they stayed on or close to their home planet of Organia.

In the 23rd century, Organia became significant in the growing hostilities between the Federation and the Klingon Empire. The starship Enterprise arrived. Captain Kirk and First Officer Spock beamed down.

The Organians created physical forms which they may or may not have partially inhabited to communicate. Kirk repeatedly noted their constant smiling and sense of peace along with an inability to comprehend any concept of being in danger.

However, this history is not about the events of the episode but about the Organians.

On whatever higher, non-corporeal level they lived, the Organians had some sort of social system. From their comments, they had a high council to deal with any issues they might have including interactions with other species.

The High Council leader at the time was named Ayelborne. But he stated that they rotated and that he, Claymare, and Treyfane were merely the current high council. The implication was that they took turns, possibly three at a time, until all of them had served as the high council and the chairman. 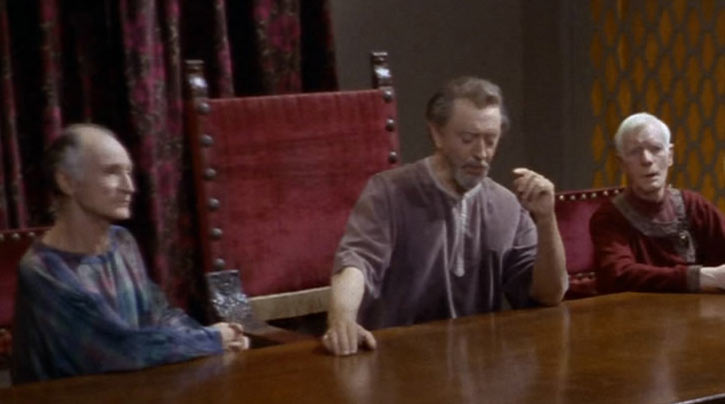 By today’s standards, they would be “a bunch of old white guys” but Kirk would expect those in charge to be older and to have experience. As to the “guys” and “white” parts, well, in the real world, this was the 1960s and often reflected the real time in which the show was made.

After an interesting adventure for Kirk and Spock, the Organians finally revealed themselves. They caused all instruments of war to radiate at a temperature of 350 unspecified degrees. This made it impossible for the Federation and the Klingons to fight, as it happened everywhere Federation and Klingon ships existed anywhere in the galaxy.

Ayelborne then explained that, even as he stood before Kirk and Kor, he also stood in the main meeting chamber on the Klingon home world and in the Federation council chambers on Earth to explain that, although they found such interference repulsive, they were stopping this war before it started.

He then asked all parties to depart as they found close contact with such primitive, violent species to be extremely painful.

In the aftermath, the Federation and the Klingons worked out what has become known as the Organian Peace Treaty. Whether the Organians ever directly contacted Humans or Klingons again, they clearly lifted their direct interference as there were later skirmishes between Humans and Klingons.

It is improbable that they would interfere again to stop a war were one to occur. It was fairly clear they only interfered because their planet would have become a focal point occupied by one side or the other. Which is something they would not allow.

One assumes they went back to their peaceful, contemplative existence, unconcerned about the corporeal universe.

Star Trek: Enterprise did a possible prequel that presented the Organians as possessing people to observe other species, a power they neither displayed nor needed in the original Star Trek episode. In that episode, they also seemed to experience no pain from proximity to such primitive species as humans nor did one of them display much in the way of being horrified by the suffering of others.

Ayelborne: “Captain, we see that your concern is genuine. We are moved. But again we assure you we are in absolutely no danger. If anybody is in danger, you are, and that concerns us greatly. It would be better if you returned to your ship as soon as possible.”

Kirk: “Gentlemen, you kept insisting that there was no danger.”
Ayelborne: “That is correct, Captain. There is no danger.”
Trefayne: “Ayelborne, eight space vehicles have assumed orbit around our planet. They are activating their material transmission units.”
Trefayne: “Ayelborne, several hundred men have appeared near the citadel. They bring many weapons.”
Kirk: “How does he know that ?”
Ayelborne: “Oh, our friend Trefayne is really quite intuitive. You can rest assured that what he says is absolutely correct.”

Captain Kirk: “You have no right to dictate to our Federation…”
Kor: “Or our Empire…”
Kirk: “…how to handle their interstellar relations. We have the right…”
Ayelborne: “To wage war, Captain ? To kill millions of innocent people ? To destroy life on a planetary scale ? Is that what you’re defending ?”

Claymare: “We find interference in other people’s affairs most disgusting. But you, gentlemen, have given us no choice.”
Kirk: “You should be the first to be on our side. Two hundred hostages killed.”
Claymare: “No one has died here in uncounted thousands of years.”

If using the abilities from the “Observer Effect” episode, add Personality Transfer: 15 and Hypnotism: 20.

“Remote Sensing” is primarily a power that Trefayne demonstrated. Though Ayelborne and Claymare may have it to a lesser degree. 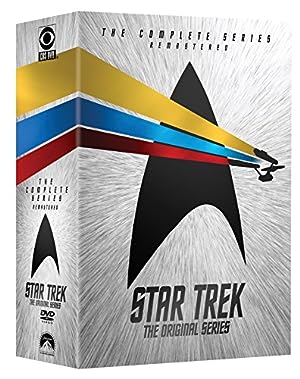