Situation :
A plane of reality which intersects our own.

Climate :
Mostly temperate if any.

Natural hazard :
None as such.

Profile :
The only central (literally) power in Orqwith is a sort of theocracy. The extend of their temporal power is unknown, but they seem to act as gurus for the Scissormen.

Current Ruler :
The theocracy is headed by a priest in white and a priest in black. One is a liar, the other, an honest man.

Capital :
The Ossuary (the cathedral housing both priests).

Executive branch :
Unknown, if any.

Legislative branch :
Unknown, if any.

Judicial branch :
Unknown, if any.

Internal political activity :
As far as is known, all Scissormen are united behind their religious leadership. Since this leadership is derived from the very intellectual principles behind Orqwith’s existence, the free will of Scissormen may be nonexistent or alien.

External policy :
The city grow by implanting parts of its own reality into that of other worlds. First in small ways, then in catastrophic fashion. Ultimately, it engulfs them and they become Orqwith. The process, from the moment it becomes visible to assimilation, seems to last mere weeks. 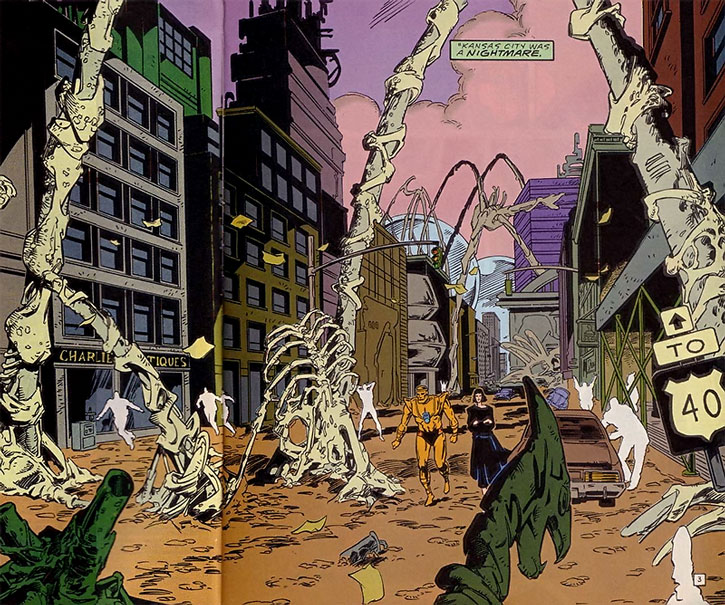 Kansas City being invaded by Orqwith.

Overview :
There seems to be no concept of money or economy in Orqwith. In fact, it may even be one of the points of Orqwith’s existence.

Tech level :
Inapplicable. Although there exist many wonders in Orqwith, they are more based on the manipulation of the laws of reality (halfway between magic and Continuum Control) than tech.

Industries :
Unknown, if any.

Agriculture :
Unknown, if any.

Imports :
None (unless you count reality invasion…).

Exports :
None (unless you count reality invasion…).

Orqwith was originally a 1980s exercise in memetic theory . Its source is the Black Book, a meta fiction (or self-referring text).

The narrative basis for these viral ideas was Orqwith, a fictional city that exists on a plane of reality that intersects our own. This city was a symbolic alternative to our own materialistic society.

Orqiwth’s entire history and geography was outlined in a book with black pages using a tactile alphabet like Braille, based on the Feigenbaum sequence of imaginary numbers . 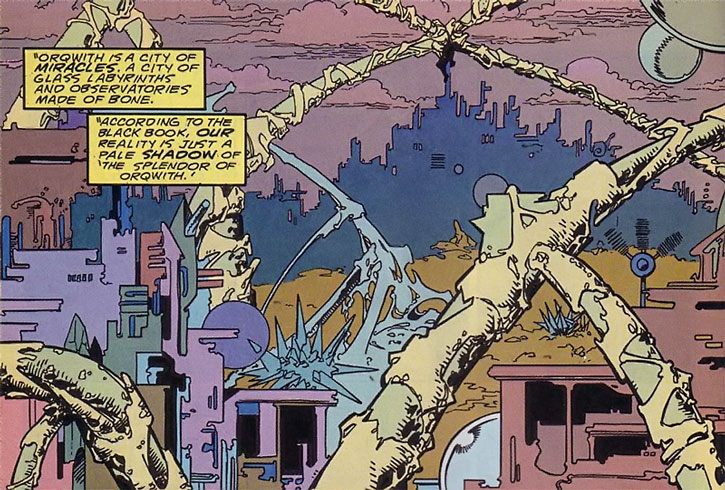 However, for some still unclear reason, the book became a gateway between the real and imaginary. Thus, Orqwith manifested itself, starting to invade our reality. It first struck at its creators, and started to trigger strange events in the world. The strangeness and amplitude of the events following a sharp crescendo.

Among the manifestations, that were at once real and imaginary, was Orqwith’s answer to the Inquisition : the Scissormen. According to Crazy Jane, these were a ripoff of Hoffman’s Struwwelpter .

One of the beachheads of the invasion was Kansas City (the Doom Patrol’s old HQ). But the US government had already called their expert on the strange : Niles Caulder, aka the Chief.

Thus, the Doom Patrol in its new incarnation (centred on Rebis, Crazy Jane and Cliff Steele) barged in. They deciphered the Orqwith enigma in about 20 minutes flat, went to Orqwith, and blew up the whole place by exploiting a fundamental logical inconsistency in this fictional/real construct.

Orqwith, the City of Bones, the City of Miracles, has neither suburbs or boundary. Walk a hundred, a thousand miles in any direction, and you will still be in Orqwith.

The city has spread like ripples in a pond from one central point. This is the Quadrivium, which is itself the “terrestrial” image of the God of the Crossroads. And in the center of the Quadrivium stands the Ossuary, the great cathedral of the theocracy that is Orqwith. The Ossuary maintains a devout silence, the very air worn thin by continuous prayer. 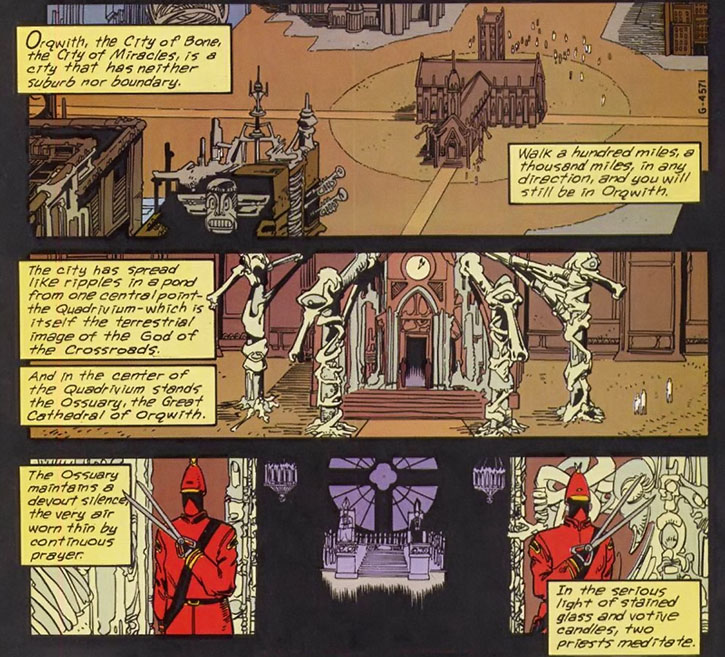 Beyond the Ossuary, the half-life of the city continues. Sleepwalkers drift among marvels wrought in the bones of unnumbered dead. Empty orbits contain electric bulbs that light and go dim in response to changes in air pressure or humidity. The skull of a consumptive child become part of a great machine for calculating the motion of the stars. A yellow bird frets within the rib cage of an unjust man.

Around every corner is some fresh wonder – the weeping clock, the water gardens, the hymning birds, the mechanical orchards.

Yet, no matter how strange, no matter how beautiful, everything in Orqwith is dulled by the taint of long familiarity. When you see it, you will know it. For Orqwith is a place humanity dream of often. It may be one of those “solid” places in the Dreaming.

Religions :
The religious tenets of the Orqwith theocracy are unclear. It apparently rests on the fact that Orqwith is an higher, purer state of existence that must be defended, and which must conquer lesser realities.

Languages :
The Scissormen speak what appear to be random nonsense. There is thus a possibility that they are quoting religious verses.

Military data :
The Orqwith military is made of a large number of Scissormen. They apparently have some level of defensive hardware, notably around the Ossuary. But the only example seen was a sort of two-man searchlight with an Energy Blast powerful enough to shatter Rebis’ Negative Spirit.

An average Scissorman has the following stats :

“Mycelium for the unsuitable !”

Bonuses and Limitations:
If a victim’s BODY is brought to 0 by the Scissorman’s Claws, they’re not killed but become a random sleepwalker in Orqwith. As such they can be brought back to Earth with a headache and no memory if Orqwith again become purely imaginary.

Drawbacks:
CIA toward Upholding the Theocracy. 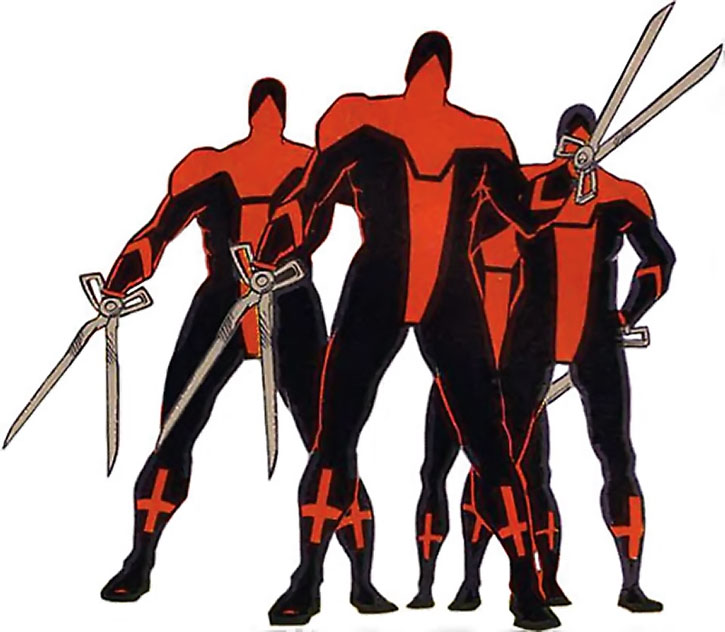 While Orqwith was shifted back to an imaginary status (or even possibly destroyed), some turn of events could again make it real. While the Doom Patrol indeed managed to destroy a concept, it probably can be brought back.

Helper(s): Template based upon the CIA’s The World Factbook.