This minor character clashed with Marvel Comics’ Master of Kung Fu in 1981.

And he had to have a profile ! Because Oryx is a clear homage to Bruce Lee student Kareem Abdul Jabbar  . Specifically, his distinctive movie appearance in Game of Death.

Oryx is a competent martial artist, mercenary and agent.

If you want this character to more closely resemble Hakim (Abdul-Jabbar’s character in Bruce Lee’s Game of death   ), or Abdul Hakim (an echo of that character in the fan-favourite Cowboy Bebop animé), his martial abilities would need to be upped considerably. 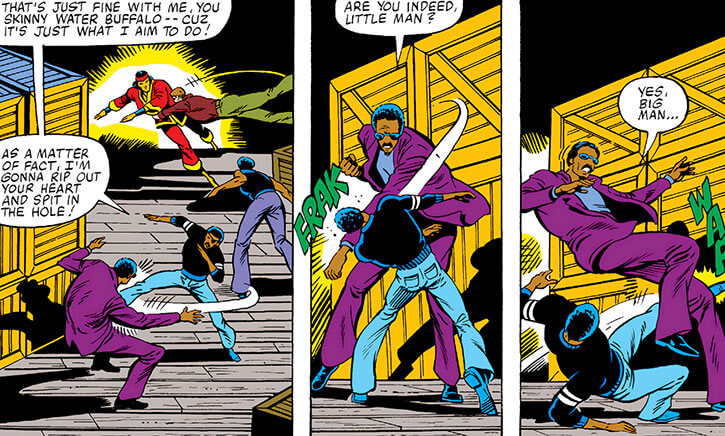 Oryx is an international mercenary. His nickname likely comes from a species of antelope  . Possibly because of his long legs.

In 1981, he was working for Yugoslavian Communists. He and several goons were sent to recover a small red book. It contained the secrets of the madman Samisdat, including the details of his secret laser satellite.

Oryx defeated CIA agent Rufus Carter by sucker-stabbing him in the guts. But he was then swiftly defeated by Carter’s ally Shang-Chi, who recovered the book.

Ironically, the book was now useless. Samisdat had been defeated and the laser satellite destroyed by Shang-Chi weeks before.

He calls most every guy “little man”.