The first Metabaron, Othon von Salza, turned his back on the familial tradition of pure martial arts. He invested a large part of his fabulous fortune in the development of the first Metabaronic weapons. Furthermore, from then on, all Metabarons were well-trained in electronics, bio-medicine, cybernetics and weapons manufacturing.

Furthermore, he is a superior space pilot, strategist and hand-to-hand combatant. He also began the tradition of cybernetic implants, by incorporating a multi-protonic pelvis. Othon has superior willpower and is capable of completely ignoring pain.

Each later Metabaron draws upon the array of advanced weaponry descended from Othon’s. These include cybernetically-implanted lasers, nanotech nuclear warheads implanted in the body, swords which can disintegrate in bursts of flame, and advanced spaceships.

Many of the Metabarons also exhibit powerful psychic abilities. Howbeit, this is not yet the case with Othon von Salza. But all, including Othon, are capable of transferring their complete memories to the next Metabaron. This is done by psychic means just before their deaths, and also transfers a tattooed crest to the chest. Memories thus accrue from generation to generation.

The Metabarons uphold a strict code of honour not unlike the Japanese bushido . This code, called bushikata, strives for victory above all things, at any cost. Victory must be achieved every time in all things, and emotion is the enemy.

Generally, love is seen as a weakness. Yet each Metabaron eventually succumbs to its effects, which produces the next Metabaron.

The Metabarons are all of the Castaka family line. The Castaka lineage and Bushitaka traditions are synonymous. A practitioner of Bushitaka has superhuman willpower and can easily, for example, hold his breath until death itself comes. Bushitaka comes with specific rules that a Metabaron lives by : 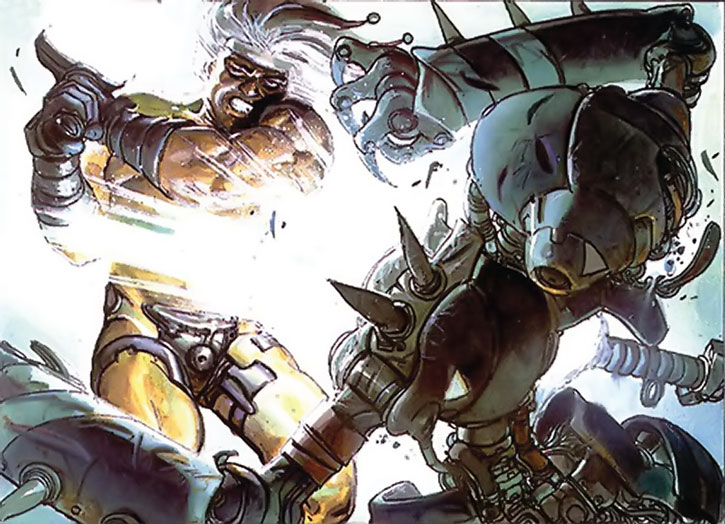 Each Metabaron’s body is a living weapon. That means training, cybernetics and considerable psionic  powers – but not only that. It also holds a built-in Oko bomb, capable of destroying a planet. Whenever a Metabaron is pierced anywhere except for his head, the bombs will detonate destroying everyone.

After the rite of succession, the Oko Mini-bombs will be transplanted into the next Metabaron.

In time, Metabarons grew so powerful that the Empire has little choice but to hire them, rather than risking getting them as enemies But of course, some Metabarons have chosen to lend their services instead to whoever pays the most. Metabarons always complete their ’impossible‘ tasks or die trying.

Othon still had an oath of loyalty toward the Empire, but his descendants were another matter.

Each Metabaron should also strive to receive honorary titles of ever greater worth, all for the greater glory. These titles do not really mean anything since Metabarons are already ranked beyond everyone else except the Emperor/Empress. For instance Othon von Salza first received the title of Baron, and then advanced to the unique title of Metabaron. This title is hereditary.

His descendants later advanced it into: Supreme Metabaron (Steelhead) and Trino-Viscount (Nameless Metabaron). Some have also received additional honorifics in the form of medals. These include the Medal of High Nobility (Steelhead and Nameless Metabaron) and the Pluri-Galactic Medallion (the highest distinction given by the Empire; Aghora).

Karma seems to decree that each ceremony is tainted by bitterness or tragedy.

The Metabarons have also often been referred to as the Greatest Warrior in the Galaxy, the Champion of the Human Galaxy and the Savior of Humanity.

Most Metabarons choose to live a life in seclusion and exile. This often leads to them despising the human race and themselves, until the day they sire an offspring, the next Metabaron. It just happens so that every Metabaron is conceived by his mother in a non-natural way (eg. by cloning or incest).

Even the names of the Metabarons are mythical. Perhaps this is a post hoc construction by future robotic storytellers, or then the characters were destined to bear a great legacy.

Othon is a rough warrior in excellent health. Over the years, more and more cybernetics will show up. See illos for more details.

Although he started out as a relatively unprincipled pirate, Othon von Salza now belongs to a proud warrior caste. Thus, he strictly follows its Bushitaka traditions. A hard life and great personal tragedies have led him into becoming more obsessed with honor and tradition over the years.

To be a Castaka is a point of pride for this warrior caste. And to bring the lineage ever-increasing glory is the greater destiny to be pursued. The idea of a great and important destiny is more important than the family members themselves. Othon being physically unable to produce an heir was torturous for him, and he would likely have committed suicide if a miracle hadn’t happened.

The suffering and rage brought on by his mutilation had multiplied his strength. It granted him tremendous energy, and turned him into a cruel and solitary warrior. On foggy nights, after intense combat training, and his usual supper of raw lizards, Othon would listen to the news of the galaxy while sipping a glass of fine whisky. So as not to forget the language of humans. 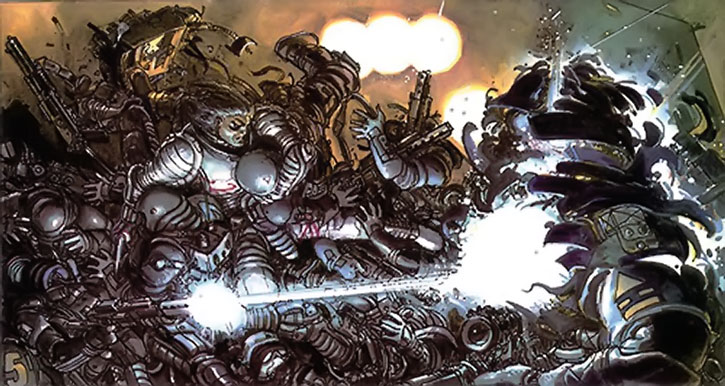 When the galaxy was threatened and Othon again found reason to live, fight and, in fact, speak, his servants rejoiced.

He seems to enjoy spectacle and will perform extreme stunts to make an impact. Othon is a capable speaker, and gravitating towards ever higher positions of power seems natural both to him as well as others. He is completely loyal to the imperial throne, and everyone knows it.

In a metabaron’s long life there are but only a few intense expressions of emotion. It is as if everything suppressed over the years bursts out in one strong instance. The rite of passage (the battle to the death between a Metabaron and his progeny) is one such moment. So is finding a future wife and the conception of the next Metabaron.

(The family is trapped inside a house surrounded by troops of the Empire) “We’re only 150 warriors with prehistoric weapons against 1500 killers with post-nuclear arms. They will crush us…” (Witnessing his wife exit and die needlessly.)

“A warrior’s honor is not earned in death, but in victory ! Deception can be an honorable weapon too ! The endoguards’ weapons are powerful, but they can only kill from a distance… those batallions forgot the art of fighting man-to-man centuries ago… and as for us, we’re trained for it ! The Baron used to say : ’Even when they outnumber you, only your willingness to destroy every last one of your enemies will lead you to victory !‘ You, Hohenhole, will attack from the north with half our men. Engage them as closely as possible, and try to fight man-to-man ! And you, Konrath, will do the same from the south. You must force the endoguards to remain tightly packed together. Come out from the secret tunnels. As for me, I’ll attack them right in the center !” (von Salza proceeds to vanquish 1500 endoguards, leaving him and his son as the only survivors)

“Paleo-Christ ! The Empire has become nothing more than a seething den of traitors. The Imperial couple has been forced to call upon the help of civilians… how humiliating !”

“Your majesties, I am the one you’ve been waiting for ! I’ve developed a very simple plan that will allow us to wipe out the entire pirate fleet without the loss of a single ship…”

“I will either be the progenitor of a clan of invincible warriors, or I will perish in the attempt. If my son fails, I will immediately follow him into death…”

Bonuses and Limitations:
SL (Gadgetry) is Always On (-1), making Othon into a cyborg.

Advantages:
Headquarters (Expansive, the Metabunker; it contains a 45 AP Laboratory), Iron Nerves, Lightning Reflexes, Misc. Advantage (Holder of the Crest; all Metabarons can mentally transfer the memories of all previous Metabarons to the heir right before their death ; this gives the knowledge of ancient history and traditions as seen fitting by the GM, 5 pts.), Rank (Metabaron), Scholar (Cybernetics, Metabaron traditions and Bushitaka, Strategy), Schtick (Pain management, Low).

Source of Character: The Metabaron comics. 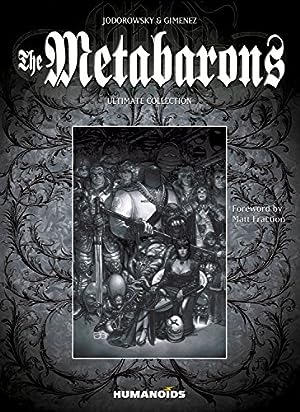 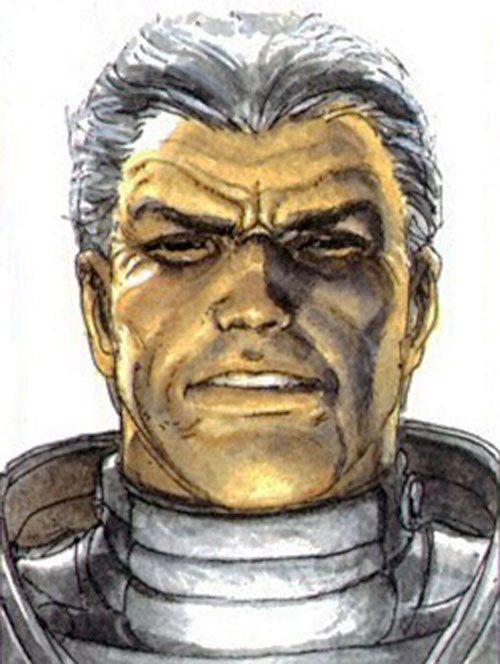 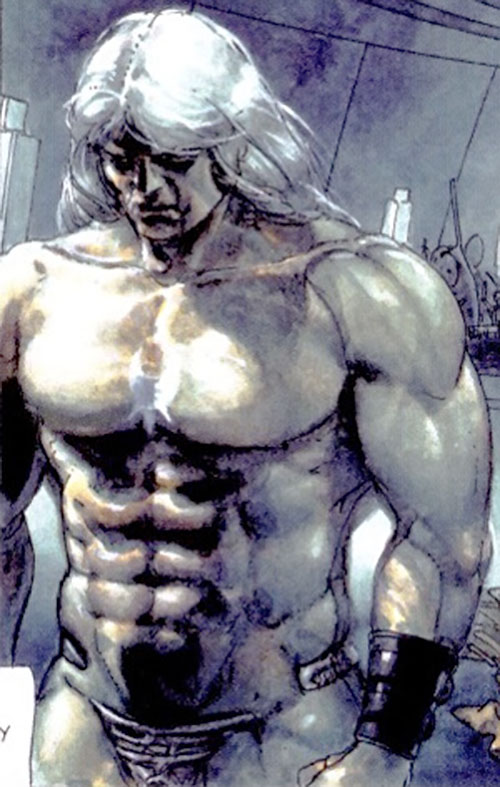 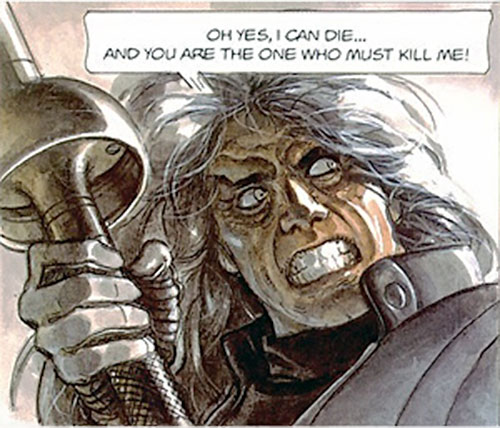