Outrage is a skilled and experienced Darkurian fighter. He is thus an able shape-shifter, with three main configurations :

Vurk seems to be a Darkurian veteran of many conflicts with ample combat experience.

It is unknown why he ended up on Earth. He likely fled there because his people hate him and want to kill him. But the reason for this are unrevealed. Vurk once implied that he was considered antisocial in his home culture, and spent time as a kid hunting monsters in highly dangerous caves sane Darkurians would avoid.

This outcast was fated to meet Lela Cho, Troy Wilde and Æra in a London pub. Æra had foretold that “an enemy pursued by his people” was to be the fourth member of The Solution. A few minutes later, Vurk, who was just hanging around, was attacked by a Darkurian war beast, which he had trouble fighting off. His future team-mates helped him prevail.

Vurk was not enthusiastic about teaming up with two Humans and, especially, his racial enemy an Ærwan. But while such a situation would have enraged the average Darkurian, Vurk was merely reluctant.&emsp.Hewas soon convinced to join in order to fight off those hunting him, and took the handle Outrage.

The human-like form is pictured above, and the Darkur form below. In human form, Vurk always wears combat boots, dark jeans and various paramilitary/tough guy items of clothing.

Vurk is a gruff warrior, who always looks quite pissed off and in a bad mood.

He favours the direct approach ; fighting is highly pleasurable for him. However, unlike most Darkurians, he stays highly rational in battle, not losing himself in the rush.

Also unlike most Darkurians, he’s not a casual killer, does not have a blind hatred of Ærwans, and does not feel complete contempt for humans. The reasons for such an enlightened attitude are unknown. He seems to consider himself very much a part of a group as a member of The Solution — at least within the limits of the Darkurian temper.

Vurk is a chain smoker and hard drinker. He dislikes environments that seems safe and protected and much prefers slums and bad parts of the town. He needs to regularly feel alone and in danger or he will go stir-crazy.

Since he’s been on Earth for decades, he seldom has problems orienting himself in Earth societies. However, he still can have difficulties understanding the most fancy and least pragmatic aspects of Human cultures.

Vurk considers himself a very tough and experienced fighter. He will often taunt his adversaries by implying they are inexperienced or not aggressive enough.

“Zuar’s balls ! I know there’s another nearby !”

“You’ll have to do better than that, pup ! I survived the T’Chal conflict !”

The Solution can exist in nearly any supers universe where one can access cybernetics (something like Nuware or Spiral’s Body Shoppe) and some aliens are around. The team is relatively independent from context.

Also, as a mercenary team, they can credibly appear anywhere and work for most everyone. Which is a boon in most less-than-cosmic campaigns.

Drawbacks:
Distinct Appearance (human-like form) or Strange Appearance (Darkur form), MIF of the Vyr. If he has to use his Invulnerability, he gains Catastrophic Rage and Catastrophic Psychological Instability for 1d10 Phases.

Most of the time, Vurk will look like a near-human. That will not draw too much attention in a major metropolis and with proper clothing. However, this is a compressed form. Darkurians are natural shape-shifters, whose natural form is huge, ugly and well-suited to combat.

This is represented by the Claws, Extra limbs, Growth and Stretching. There are no intermediate forms between the natural battleform and the near-human form ; all those Powers have to be activated at maximum APs simultaneously.

Darkurians are quite unstoppable, as they can regenerate terrible wounds very quickly. This is modeled using Regeneration and the improved RV. As a special effect, some attacks that inflict no RAPs or are LDDed away will seem to be a wound that is instantly healed.

They have, however, a special organ inside their body. If that organ is destroyed, they cannot regenerate from the blow that destroyed it and any subsequent one. This is a form of Power Burnout.

The Burnout level on the Invulnerability is normally Catastrophic, but Outrage is an experienced warrior. As such, he’s skilled at making this organ move unpredictably inside his body to minimize the chances it will get hit. 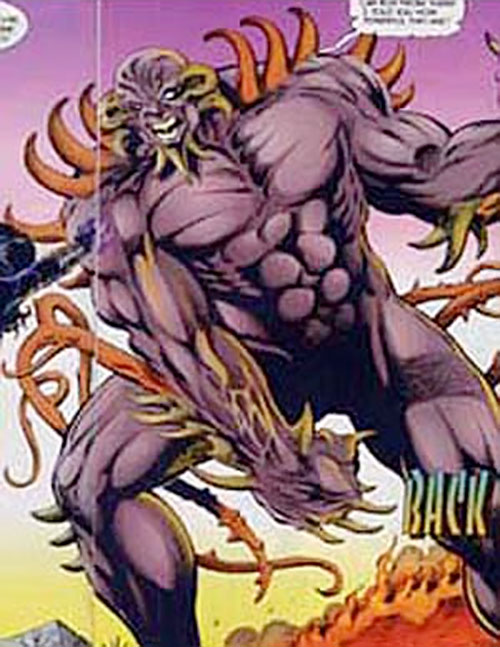