Outrun possesses the capacity to run at superhuman speeds for extended distances. Her entire body seems to be accustomed to the rigours of high-speed movement.

Her practical reaction time is many times faster than the average human being. This allows her to perceive and adjust to her surroundings while moving at superhuman velocities.

While her top speed is currently unknown, she has proven to be fast enough to run from Los Angeles to Utah and New York to Iowa in seconds. She also could run at a sufficient velocity to cross the Atlantic Ocean by skimming.

Outrun was already an accomplished and popular heroine in South Africa when the Guardians of the Globe offered her membership to their team. She accepted their offer in the same manner in which she did everything in life; in the blink of an eye.

She hadn’t been a member of the team for very long before she ran afoul of the villainess, Embrace. Embrace can possess another human’s body and control their every action. Thus, she used Outrun’s body to infiltrate the Guardians of the Globe and to feed information back to the villainous organization, the Order.

Embrace’s masquerade lasted for an extended period of time without arousing any suspicion. While she was in possession of Outrun’s body, Embrace initiated several sexual encounters with the male Guardians, and tried to experiment with one of the female ones.

During the entire time, Outrun was conscious and witnessed every degradation that Embrace heaped upon her body as well as her reputation.

Eventually, the Guardian known only as Best Tiger, discerned that Outrun was not in control of her body. He forced Embrace to flee. With her freewill re-established, Outrun turned her full ire against her “comrades” in the Guardians that she felt took advantage of her. 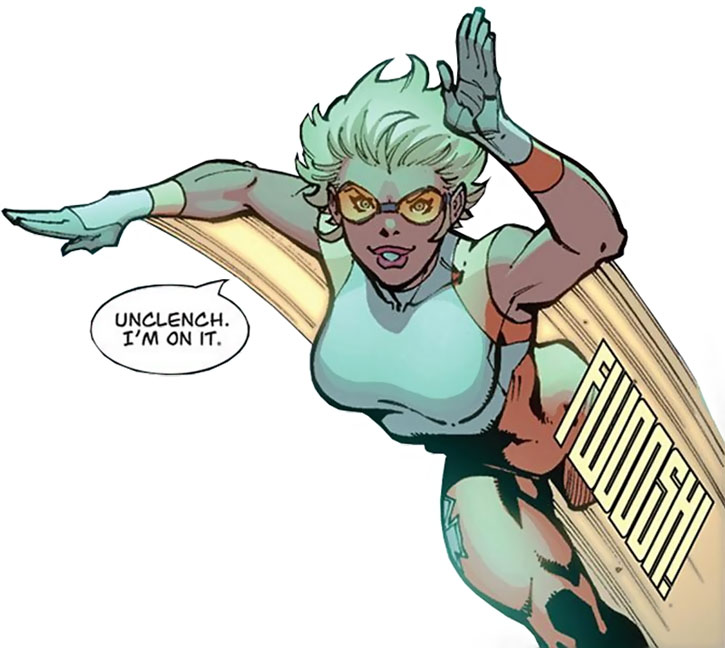 At this time, it seems as if Outrun has come to terms with most of what occurred to her while she was possessed. She has even started a relationship with the hero Kaboomerang who was one of the heroes that Embrace slept with while in possession of her body.

Time will only tell exactly how well she has adjusted to her new status quo.

Outrun is a beautiful woman. She has light blonde hair that sits in an unruly shock upon the top of her head, a lithe runner’s physique and statuesque beauty that one would find in a model. 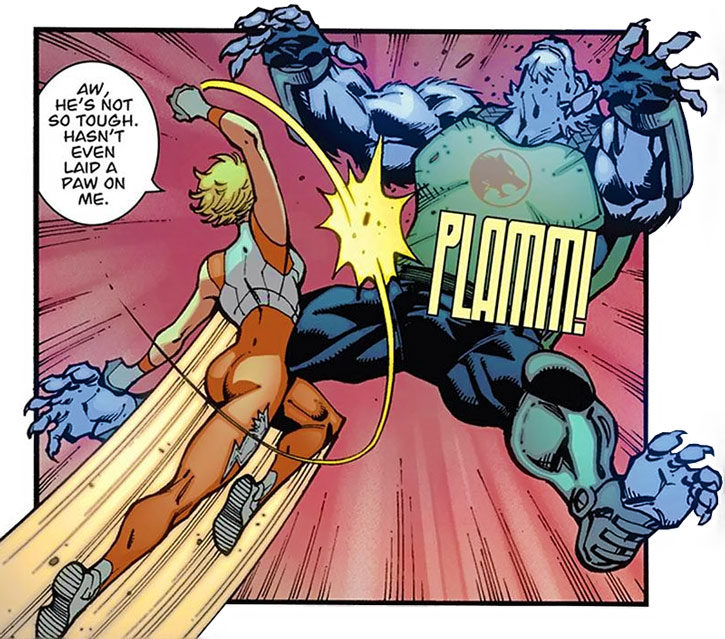 She normally wears a somewhat garish orange and white costume that greatly resembles the garb of a professional sprinter. Her costume is topped of with a pair of golden goggles which she presumably uses to keep particulate matter out of her eyes while travelling at high velocities.

Outrun is a professional crime-fighter, with a capital “P”. She takes her job very seriously and prides herself on executing her every move with precision and speed. 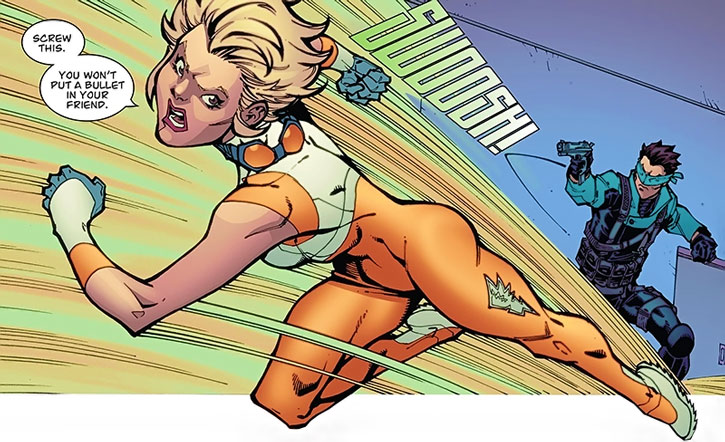 Outrun does possess a somewhat wild side. She quite often flirted with her fellow Guardian Bulletproof. Perhaps this flirtatious nature made it easier for the Guardians to ignore her outlandish behaviour while possessed by Embrace.

“Hello there. What say we get you lot somewhere safer, eh ? How does Iowa strike you ?”

(While running across the ocean)
Cecil: “Outrun, Where are you ? GPS shows you way off-site !”
Outrun: “I’m en route to the Salisbury plain. I think I’ve figured out how to stop Gorgg permanently.”
Cecil: “Salisbury — The Stonehenge site ?”
Outrun: “That’s the one !”

(To Best Tiger after he freed her of Embrace’s control) “About freaking time someone figured that out !”

(To Zandale, Shapesmith, Chupacabra and Kaboomerang after being freed of Embrace’s control)
“Pigs. That’s what I’m looking at right now. I remember every last detail of what that bitch made me do with each one of you, you know that ?”

(To Cecil when he orders the Guardians back to duty) “We’re not robots — no offense Robot — we have lives. Some of us, like Bolt and Brit, have kids.”

With so little being known about Outrun’s past, she could easily be dropped wholesale into the DC Universe as yet another speed force empowered speedster in Coast City. 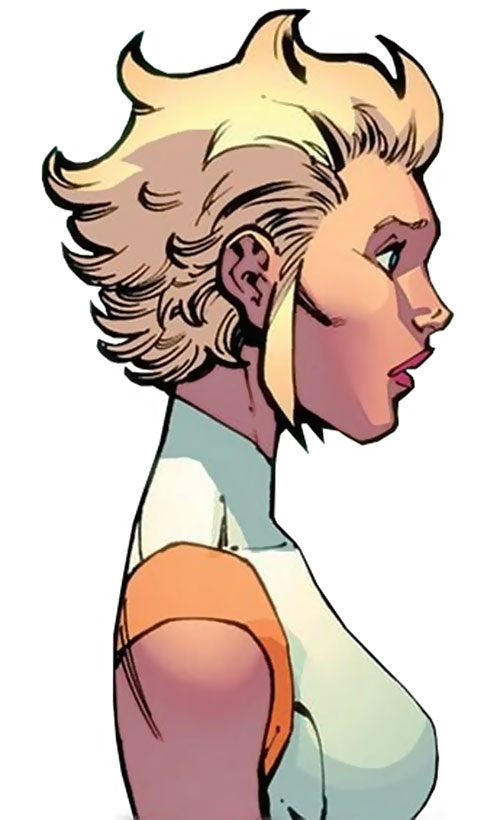 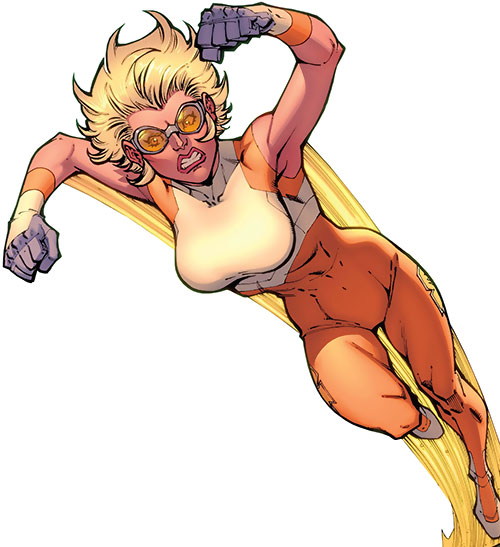 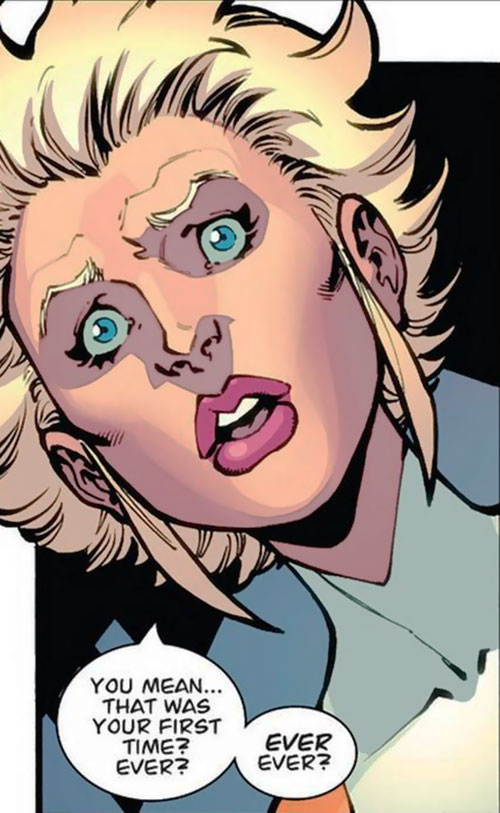 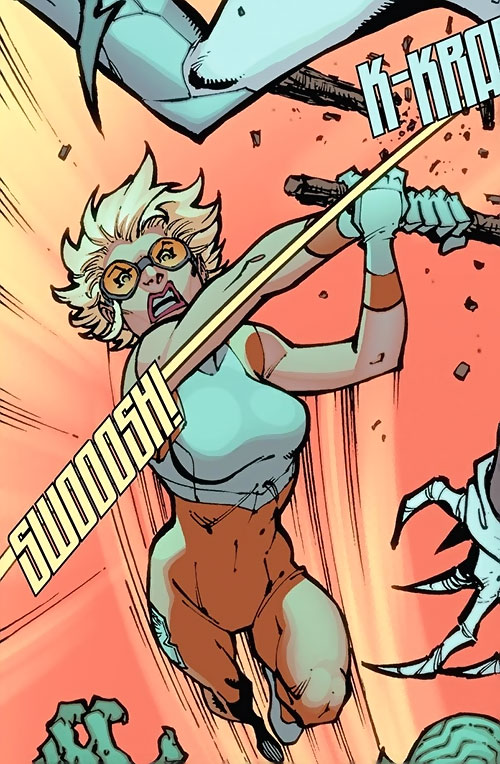