This is the second part of our team profile for DC Comics’ Outsiders. It covers the 1986-1992 span.

So it’s meant to be read after the first part. For Markovia !

Extent of operations:
Global, but with a clear emphasis on the USA.

How backwater Markovia can suddenly pump hundreds of millions of dollars into a moonshot project like Station Markovia — or have an international airlines company and lavish consulates — is unclear. But part of the funding for the Station was from the US government.

The Outsiders — as befits their name — had relatively few contacts with other super-heroes. 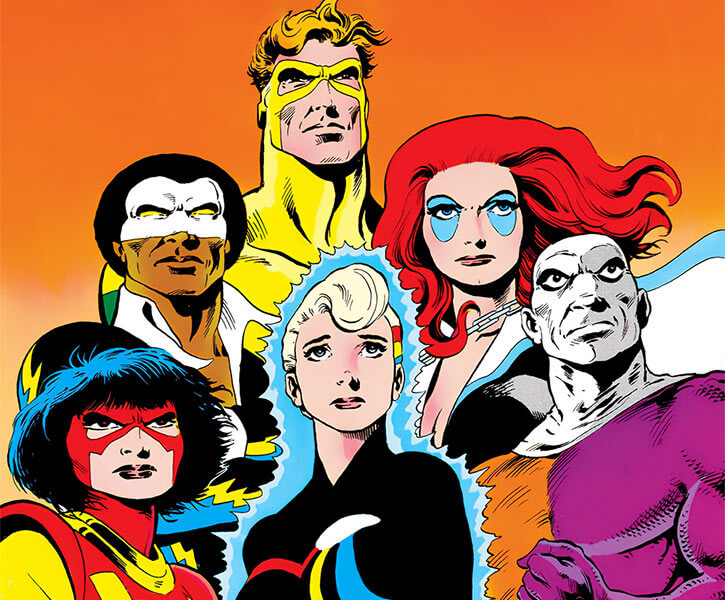 Organizational structure:
This version of the Outsiders is a group of friends, who generally collaborate in a smooth manner.

Geo-Force is nominally the leader. But that’s seldom obvious in the group’s dynamics. He renounced leadership after he made a bad call, and that changed next to nothing.

In practice, it is usually Black Lightning who comes up with the tactics, coordinates the group, monitors morale, etc.. But he does that in a low-key, unobtrusive way. 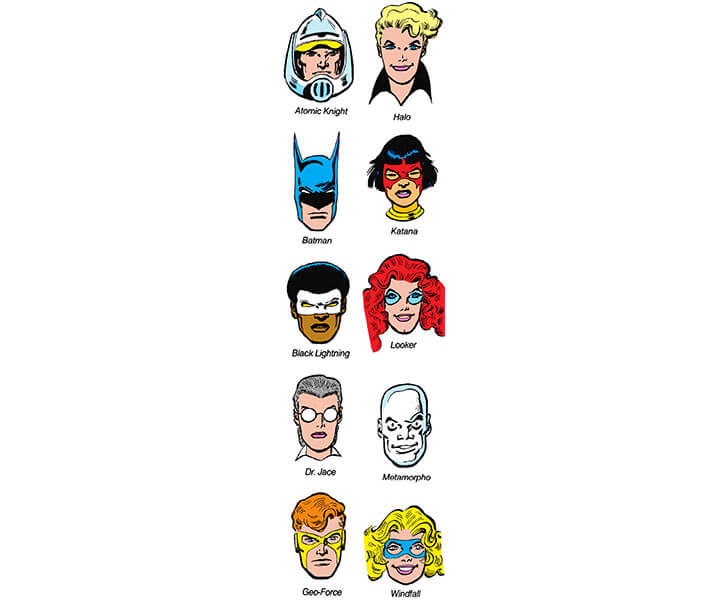 For long-range mobility they use a small business jet. Likely something like a Hawker 400  (later produced as the Beechjet), though it’s drawn with weirdly MiG-like lines. By 1988, it had been modified with VTOL capabilities. It also carries a cammo tarp.

Station Markovia is entirely automated. This is likely done through some unique tech developed by Dr. Jace. For instance the air vehicles are tended to by tracked robots.

The reinforced security cells have a BODY of 11 or so. They can be swept by automatic machineguns, normally loaded with anaesthetic bullets. 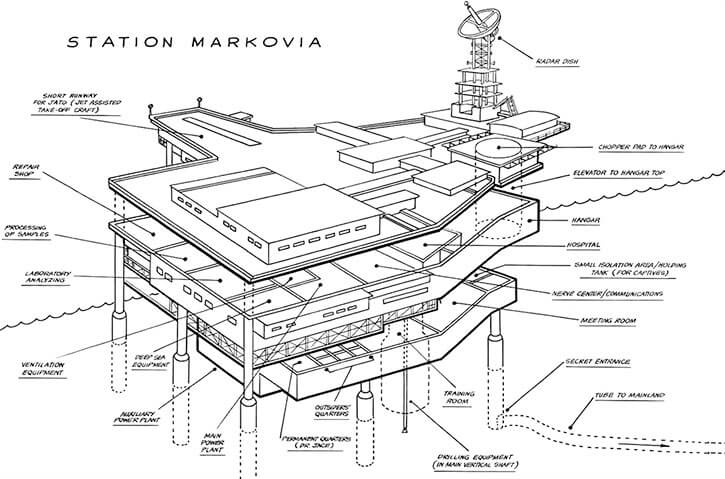 Station Markovia was blown up in early 1988.

This base was co-designed by Dr. Jace and Batman (Bruce Wayne). Using the Outsiders’ abilities for excavation, power, etc. it could be built in record time.

We barely ever see it used in the Outsiders material, though. 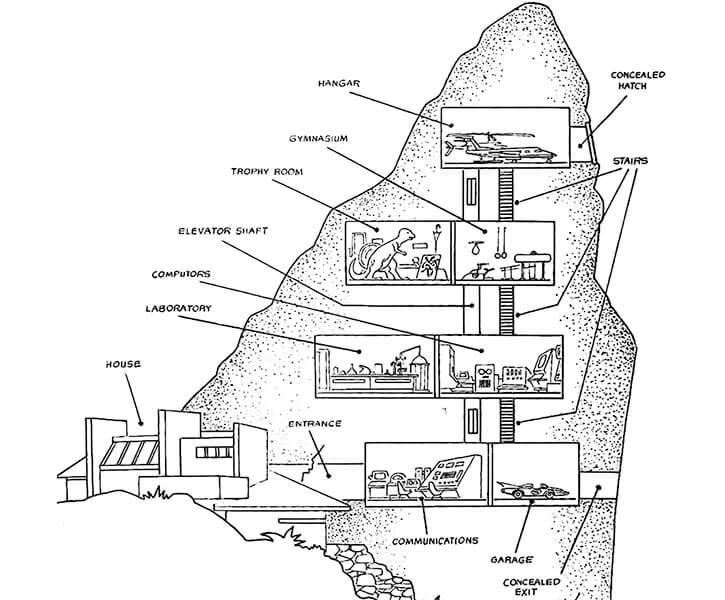 This is using publication time rather than sliding time.

Holding out for a hero is a solid socio-chronologico-culturo-whatever match for the comic.

The King twice had seen the USA, nominally allies of Markovia, refuse to save his kingdom. He thus considered that funding a deniable, unaccountable, lethal superhuman strike force was a great plan.

(King Gregor said nebulous stuff about the Outsiders being “agents of change”. But he confirmed the obvious to his brother Brion. Namely, that he wanted to have a superhuman force that’d feel morally obligated to protect Markovia. Without overt ties.)

Most of the team took the deal. However Windfall, who had been helping the Outsiders, chickened out.

After saying goodbye to their friends in Gotham, the Outsiders rebased in Los Angeles. Since they needed R&R, they travelled there on a luxury cruise ship.

However, said ship was intercepted by the Marine Marauder (Marlene Simmonds). The would-be pirate held the entire team at bay, but was eventually vanquished.

Meanwhile, the rest of the Outsiders settled in town.

Predicting a terror strike against a nuclear power plant, the Outsiders covertly defended the facility.

But a much more dangerous attack followed. The team but narrowly defeated the Nuclear Family. 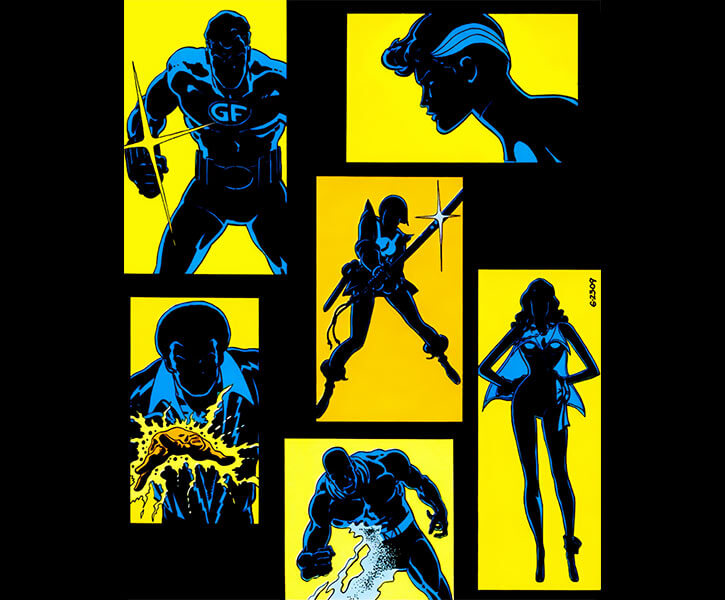 An elite spy going by “The Bad Samaritan” stole currency-printing plates. There was a set for US dollar bills, and another for Markovian bills.

He dodged a major manhunt, then flew to the Soviet Union to deliver the plates.

Back in the USSR

The Outsiders pursued, despite misguided interference by the Force of July.

The Force was then captured. But the Outsiders sneaked into the USSR to free them.

Premier Gorbachev  ordered the Red Army to let the Force and the Outsiders go. To the Samaritan’s befuddlement, he also gave the printing plates back.

The Premier’s plan never had been to use the plates. He wanted to :

Analysis of the Force’s powers by Soviet scientists would soon result in the creation of the People’s Heroes, Fusion, and perhaps others. 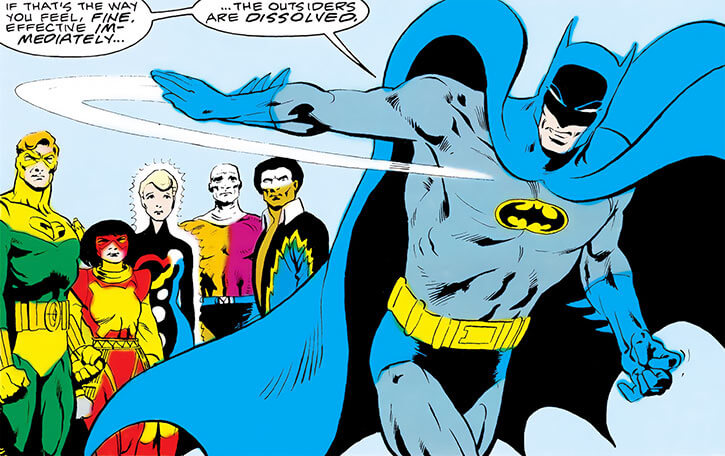 The Outsiders improbably entrapped an aged mob accountant. That allowed for dismantling the Sinclair mob, which had been evading the L.A. law for decades.

Station Markovia was then visited by an oilman with extensive government connections, Earl J. Dukeston.

However, he was secretly a Skull agent – as the Duke of Oil. He tried to take over the facility, but the Outsiders narrowly repulsed him.

The Noguri yakuza clan then attempted to have their revenge against Katana. They enslaved small supernatural creatures, the egg tengu, to trap her soul in her own blade.

The Outsiders then got into a row with Mr. Bentama, the tyrant ruling Mozambia.

Albeit internationally hailed as a philanthropist, Bentama was a ruthless bastich. Furthermore, he kidnapped Lynn Stewart, Black Lightning’s ex-wife.

(“Mozambia” appears to be a much-expanded Eritrea, which took over the Sudanese coast and a good chunk of Ethiopia. I’m… not sure how it works. Everybody in the Soviet State of Mozambia is fluent in English, obviously.)

(In the DC Universe, a thinly veiled 1985 Live Aid concert  was a Mozambian plot to fill the USSR’s coffers. So that’s a thing.)

The Outsiders sneaked into Mozambia. They were defeated by Soviet super-team the People’s Heroes. However :

The Outsiders thus escaped, then defeated the People’s Heroes. Since the military hated Bentama’s guts, the revolution was brief and successful.

However, the Bad Samaritan shot down the Outsiders’ aircraft on its way out. The team was marooned for nearly a month on a desert island.

This brought interpersonal tensions to the fore. But eventually, the Outsiders managed to reach a passing boat.

Weeks later, they had an unexpected team-up with both the Force of July and the People’s Heroes. Though awkward, this foiled a terrorist plot led by Communist hardliner Fusion.

The Outsiders then again clashed with the Skull organisation. Skull had forced Kobra to serve them, but Kobra leaked information so that the Outsiders would intervene.

(Back then, Skull was a major criminal conspiracy. A sort of shadow of Marvel’s Hydra, or the Corporation).

This case led to a team-up with Batman (Bruce Wayne). Though they had to let Kobra flee in order to disarm the missiles, this Batman & The Outsiders reunion was successful. 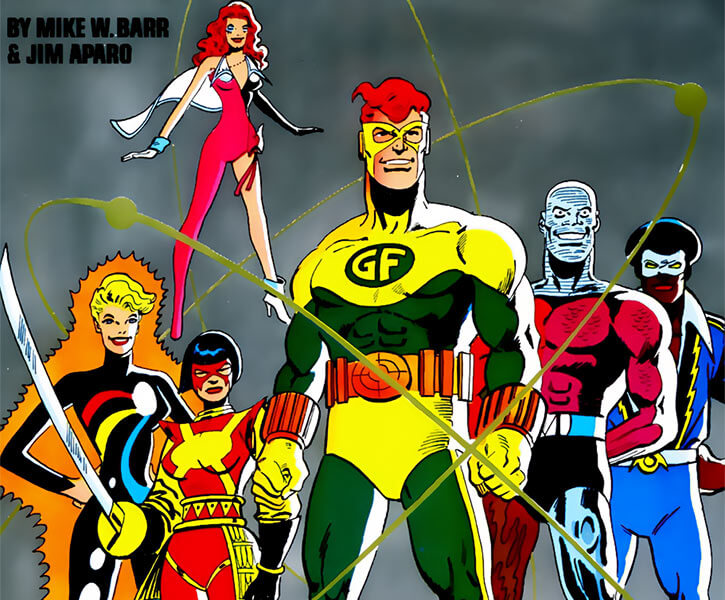 Looker was then framed for the murder of a private investigator. But the team’s detective work led to uncovering the real culprit within 24 hours.

An accident unleashed an intelligent virus at a Los Angeles lab. It formed a horde of mind slaves. But Dr. Jace and the Outsiders eradicated it just in time.

Total eclipse of the bat

The Outsiders were reunited with Batman a second time, to fight Eclipso on the San Diablo island. The godlike villain forced the Moon into orbital synch, to permanently eclipse the area.

Batman’s experience in opposing Eclipso was instrumental in winning the day. The Moon could also resume its normal course before massive damage accrued.

Thought there was passing tension with Geo-Force, the Outsiders and the Batman mended fences. 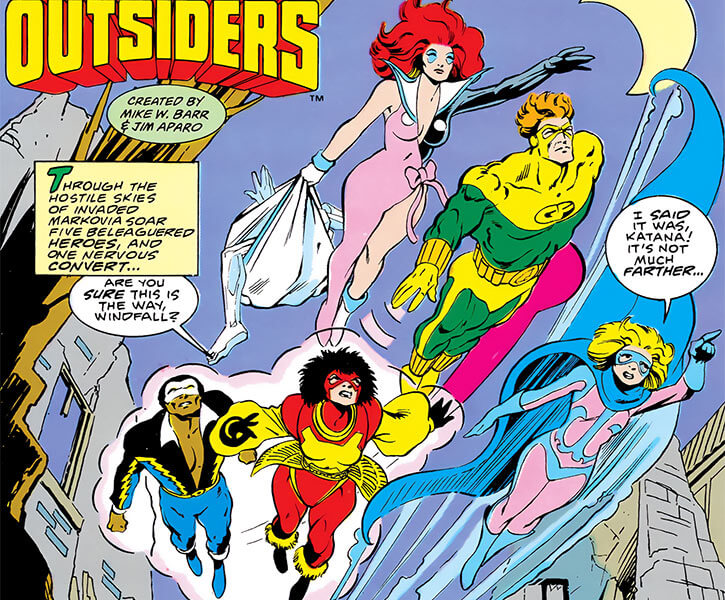 The dastardly New-Wave — leader of the Masters of Disaster — then sent a clone of her sister Windfall to infiltrate the Outsiders.

However, Batman realised what was going on. Though the infiltration seemed to be a brilliant success, it actually drew the Masters of Disaster into a trap within a fake Batcave. In the fray, the Windfall clone was apparently killed.

The real Windfall soon was approved as an Outsiders member.

Despite the efforts of Clayface (Sondra Fuller), the Outsiders then intercepted Strike Force Kobra. Kobra’s operatives had invaded a Stagg Enterprises lab so he could create their newest member.

The experiment was partially foiled, but the terrorists all got away.

Meanwhile, the situation in Markovia had been deteriorating. The newest Prime Minister was a puppet of Carlyle, the master of the Force of July. He was backed by the Psycho-Pirate (Roger Hayden), disguised as Baron Bedlam.

However, he made the mistake of arresting the visiting Skyman (Sylvester Pemberton). This led to an alliance between the Outsiders and Infinity, Inc.. Mixed teams were formed, but :

However, both teams managed to escape. Carlyle and his Force of July were prevented from landing in Markovia, and the Psycho-Pirate was defeated by Looker and Brainwave (Hank King, Jr.).

The team and Batman then foiled another attempt by Fusion to murder President Reagan.

However, that meant invading Camp David  . This further degraded their relationship with the American security apparat. The American Security Agency even tried to ambush and capture Halo and Windfall.

(By this point, it seemed like the book was about to enter a new era, with a modified roster, hostile authorities and no backers.) 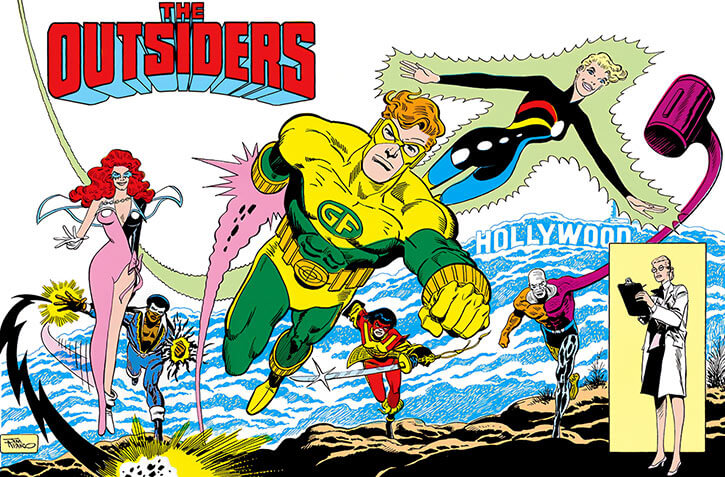 Geo-Force and Dr. Jace returned to Markovia to address the diplomatic crisis with the US.

Stepping up her plan, Jace covertly murdered both King Gregor and the American emissary. This worsened the crisis, and forced Prince Brion to become King. Jace then brainwashed the Queen to accuse him of murder, and Brion was arrested.

However, the Outsiders realised that Jace was a traitor. They freed Geo-Force.

The Outsiders and many others were then summoned by the Green Lantern Corps. Earth had been selected as the source of a new generation of Guardians of the Universe.

However, this was opposed by the Manhunters cult. This organisation was headed by powerful evil space androids, who had been the Guardians’ enforcers. The Manhunters had been the predecessors of the Green Lanterns, aeons ago.

The Manhunters had injected many traitors to manipulate Earth’s heroes. Dr. Jace was but one.

With Metamorpho now serving her, Helga Jace defeated the entire team. She then trapped them in the VR “dream” of the Silver AgeSuper-hero comics from the late 1950s to the early 1970s Atomic Knights.

However, the Outsiders broke free. And in the ensuing fracas, both Dr. Jace and Metamorpho were slain. 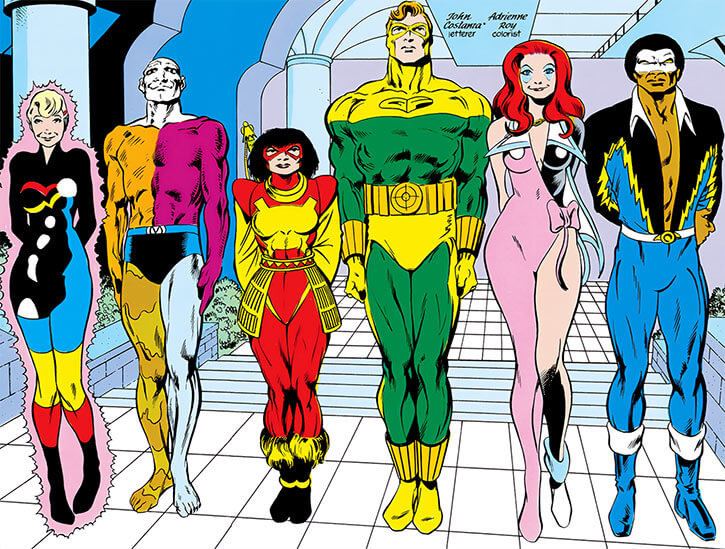 End of an era

With the Manhunters crisis still raging, Looker was summoned back to Abyssia, where she had received her powers.

It was another Manhunter trap, but she detected that in time. The team thus freed Abyssia from the Manhunters.

However, in the fray, Looker lost her enhancements and Halo was grievously wounded.

As the team broke up :

The latter three were seen from time to time during big events. As reinforcements for large groups of heroes. It is possible that they continued to use the name of Outsiders, but there wasn’t a team per se.

The Outsiders remained defunct until 1993.

I have some pics left over from the previous format and I hate throwing stuff away, so… 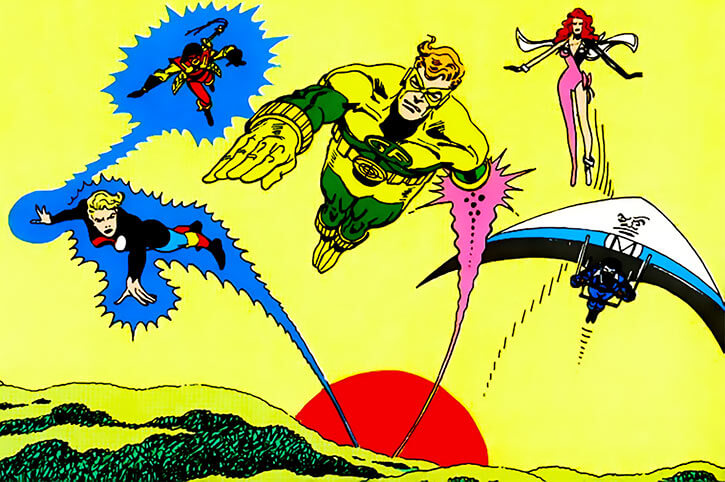 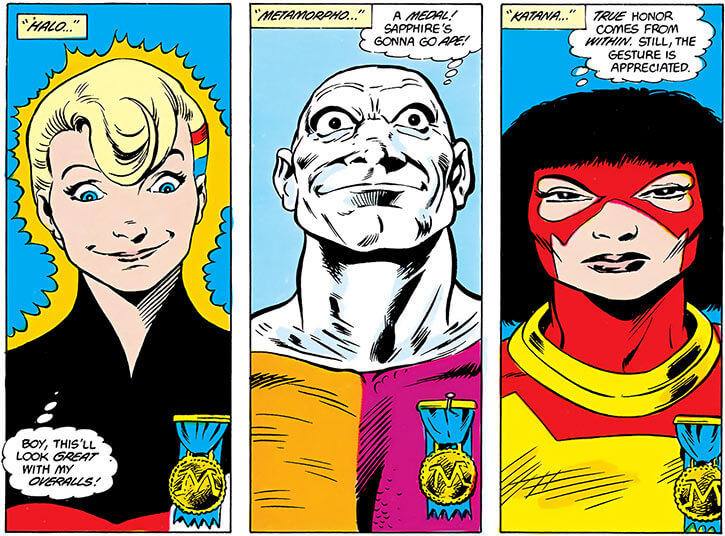 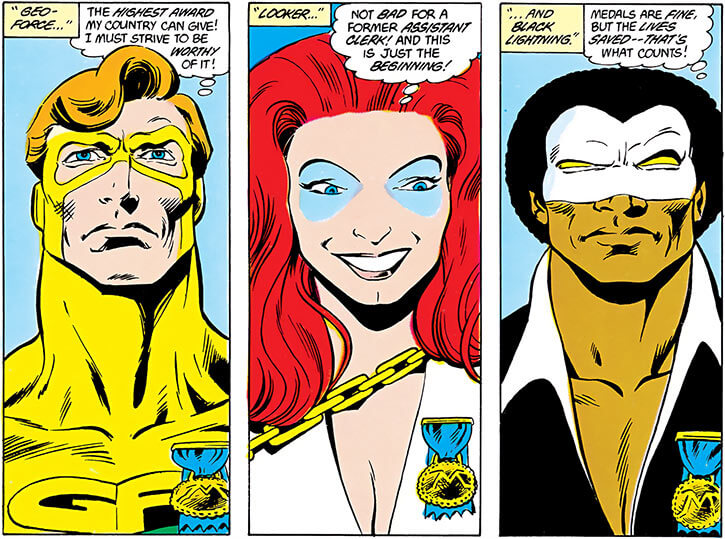 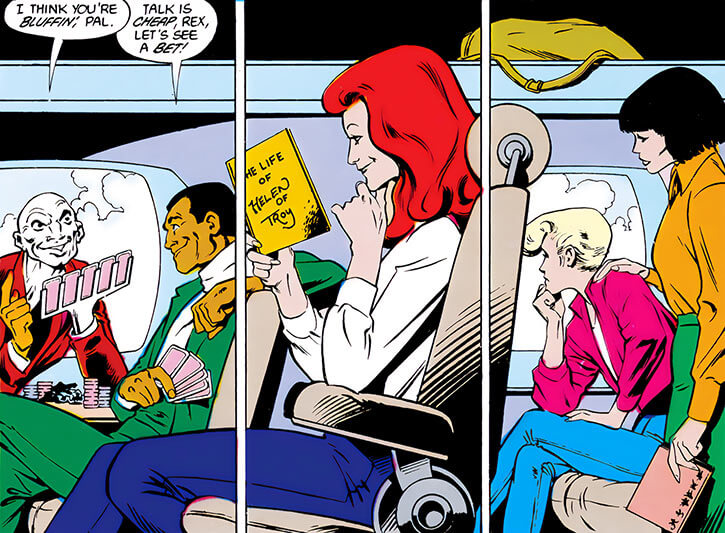