The Outsiders are a B-list team of super-heroes in the DC Universe.

Historically, they’ve had close ties with Batman (Bruce Wayne). Or one of his close allies, such as Richard Grayson.

This short-ish article covers the first iteration of the team, from 1983 to 1986. ’86 is when they part ways with Batman, and the Crisis on Infinite Earths occurs.

Providing a better sense of purpose and identity for most members.

In practice, they mostly respond to the crimes or attack of the villain-of-the-month.

Extent of operations:
Global, but with a clear emphasis on the USA.

Relationship to conventional authorities:
Arm’s-length relationship with the US police. The Outsiders generally operate in their own terms, like Batman.

The team eventually developed an enmity with factions within the US Federal government.

Except during the Crisis on Infinite Earths, the Outsiders — as befits their name — had few contacts with other super-heroes. 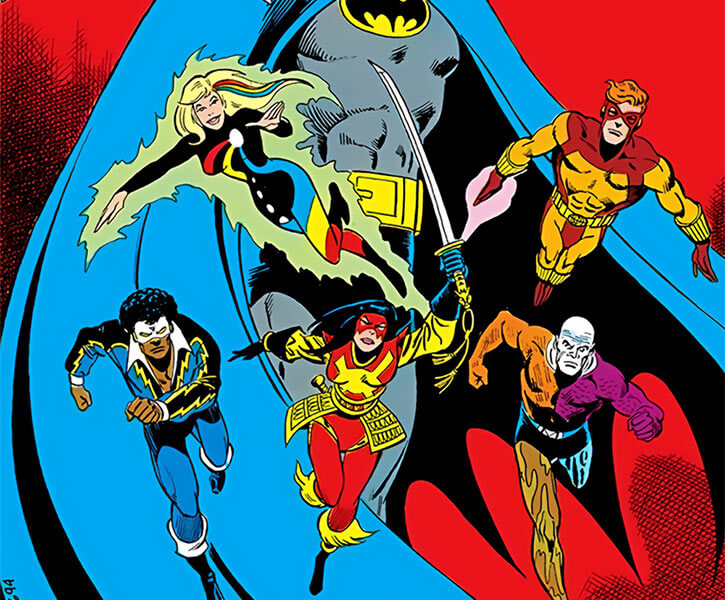 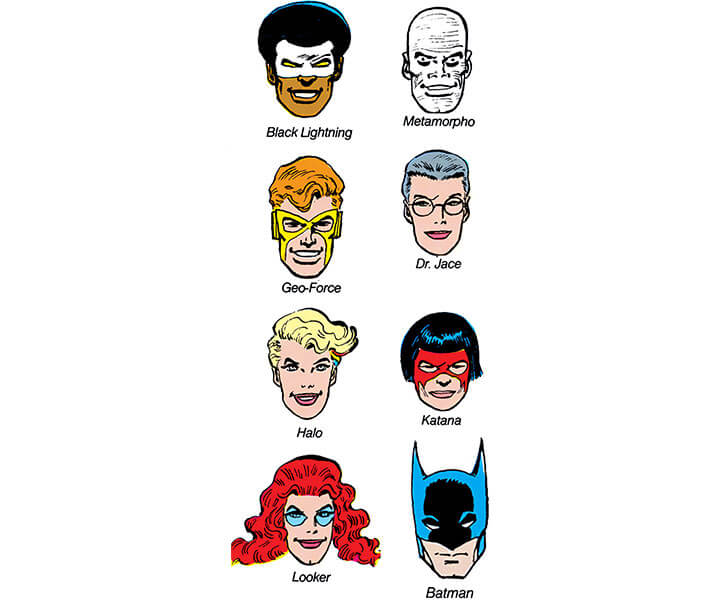 The Outsiders were provided with good living quarters and wages.

They could also access Wayne Foundations means, which mostly meant :

They also had in-ear tactical radios, quite advanced for the 1980s. Each unit could also track down another emitting unit. [BODY 01, Radio communications: 08, Miniaturisation: 03, R#03].

The Outsiders have occasionally deployed small, mission-specific gadgets. Such as wristwatch-sized radiation counters.

I firmly remember Eurythmics’ Sweet Dreams being the official, uncontestable, universally-endorsed, chosen-by-the-people soundtrack for the year 1983.

The Outsiders were the result of an unlikely pile-up of coincidences in 1983 Markovia :

As they gradually ran into each other, these formed an ad-hoc team.

Batman, who had recently left the JLA, took them under his batwing. He also convinced them to become a team.

(For more about Markovia and its situation, you can check the Baron Bedlam character profile. It was, uh, distinctive.)

Hey babe, take a walk on the outside

Before they could start training, the Outsiders assisted Batman in stopping Agent Orange’s terrorist movement in Gotham.

They then intervened in another terrorist plot. It was a suicide attack on a hospital where this terror organisation’s leader was being held.

Batman and the Outsiders then intercepted the One-Man Meltdown (Ned Creegan). But they realised in time that they were being used by a corrupt warden who sought to kill Creegan.

The group then teamed up with the Teen Titans. This made it possible to defeat the Fearsome Five, and in particular their powerful leader Psimon, after they kidnapped Dr. Jace.

(That was back when the Teen Titans sold like gangbusters – the Pérez/Wolfman era.) 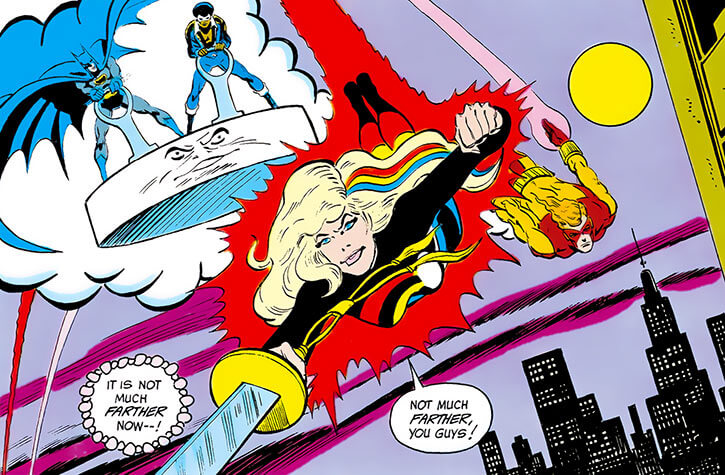 The Outsiders went on to clash with the Cryonic Man, who briefly kidnapped Katana during their battles.

The team then allied with the Justice League to face the global menace of the Cosmic Tree, and the otherdimensionalLocated in another reality god Zeta. This involved a jaunt back to the 1940s, fighting Zeta’s operatives along with Sergeant Rock and Easy Company.

The team then unexpectedly teamed up with the Phantom Stranger. The Stranger was opposing Tannarak’s monstrous plan to be reborn through newborns.

The Masters of Disaster then had their first clash with the Outsiders. The super-mercenaries had been hired to kill Black Lightning. But the Outsiders located their captured comrade on an abandoned oil rig platform, and rescued him.

Another revenge took place when Katana’s brother-in-law ambushed her and stole her sword. Though Katana wanted to deal with this on her own, the team flew to Japan to help.

They were successful and Katana’s nemesis was slain. However, the Batman was poisoned by Blowdart.

Though they were ambushed by Mayme, the Outsiders managed to keep the Batman alive. In the aftermath of this crisis, he revealed his identity as Bruce Wayne to the team. 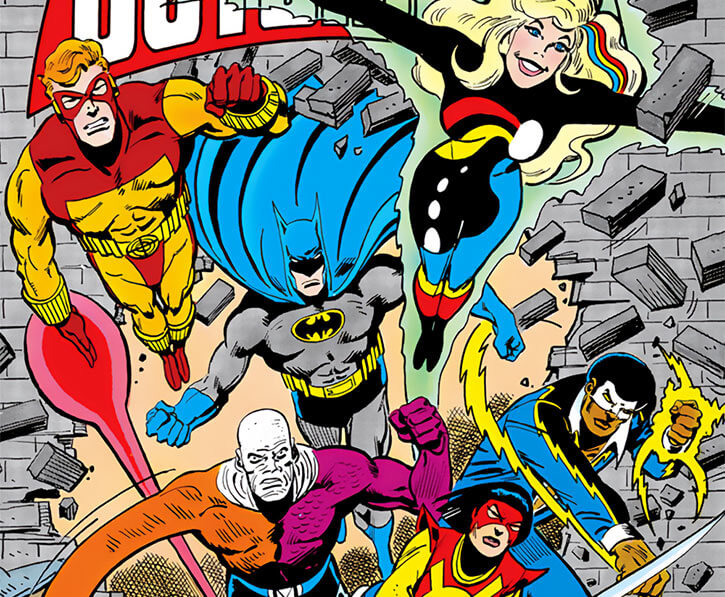 While Batman was recovering, he sent the Outsiders to investigate the conspiracy directed by one Eric Blairman. This led to a series of clashes with the Force of July.

Though at first the Outsiders were overwhelmed, they got the hang of their opponents. Blairman’s conspiracy was defeated.

The Outsiders then had a particularly high-profile case. Maxie Zeus and his New Olympians attacked the 1984 Olympic Games in Los Angeles, and took President Reagan hostage.

But Batman and the Outsiders were already in place, and proved more than a match for the madman (that’s Zeus) and his cadre.

The team took Metamorpho’s corpse to Egypt. There, they exposed him again to the meteor that had turned him into the Element Man. This did resurrect Rex.

However, it also created an opening for an evil XXth Dynasty wizard to bring everyone 3,000 years into the past. And magically enslave Metamorpho.

Metamorpho was eventually unshackled, and the Outsiders returned to the present. 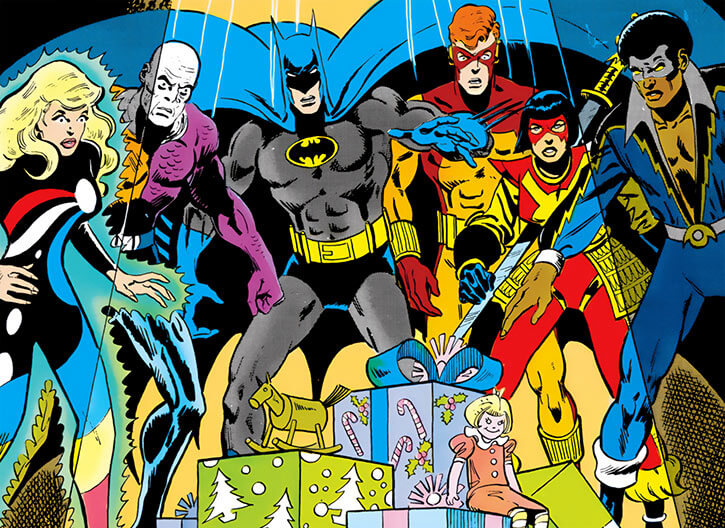 However, one of Geo-Force’s friends tried to kill herself. The University’s dean had tried to force her to have sex with him.

Realising that most rapists had little to fear from a trial, Geo-Force tried to kill the dean. Batman had to call in Superman (Clark Kent) to bring the situation back under control.

The Outsiders (including Halo) then accidentally discovered Halo’s alien nature. Her fellow Aurakles otherdimensional light forms came to kidnap/repossess her.

However, the Outsiders invaded their dimension, forcing them to release Halo back into the material world.

The Outsiders went on to stop what seemed to be an ecoterrorist attack. But as Batman soon discovered, it was actually an attempt to assassinate Sapphire Stagg — Metamorpho’s fiancée — and her dad.

Halo was then caught in a grandiose plot where Kobra (Jeffrey Franklin/Naja-Naja) hijacked a space shuttle, then US orbital defences.

She was forced to reveal the identities of Batman and the Outsiders, but the assassination attempts against her teammates all failed.

Thanks to Batman, the Outsiders then managed to :

The marriage between Sapphire Stagg and Metamorpho was attacked by rogue scientist Maxwell Tremayne. Though Tremayne was working with the Masters of Disaster, he was defeated. 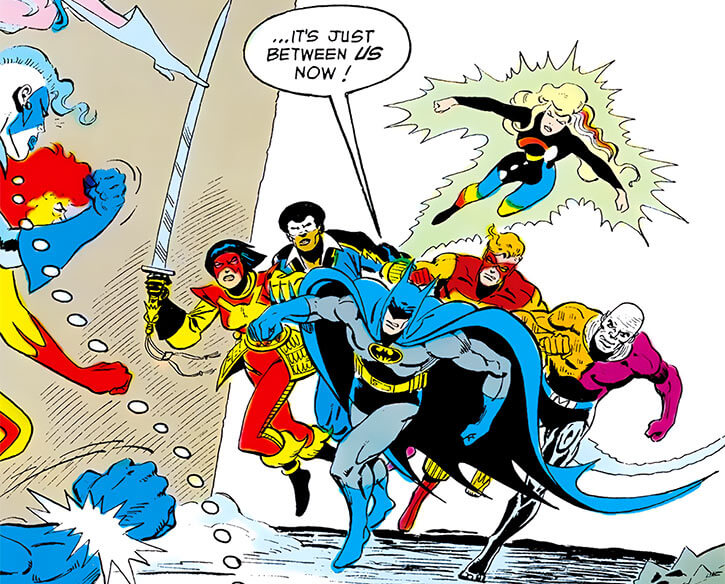 The Outsiders went on to investigate the kidnapping of bank employee Emily Briggs. They thus discovered the underground civilisation of Abyssia.

Allying with Briggs — now the superhuman Looker — the Outsiders prevented the Abyssians from destroying the surface world by crashing Halley’s Comet into Earth.

However, the team’s relationship with the aloof, demanding Batman had been degrading.

And then the boss Wayne’t away

This came to a head when Geo-Force realised that Batman hadn’t told him that another coup was taking place in Markovia. Batman thought that Geo-Force was more needed in Gotham, but Markov definitely disagreed.

Leaving Batman behind, the Outsiders rushed to Markovia. They wished to help Geo-Force against Baron Bedlam’s newest ploy. However, they were defeated by the Masters of Disaster.

The Outsiders were freed by Looker and Windfall (Wendy Jones). They were then able to kill Bedlam and rout his troops.

However, the coup had resulted in significant casualties and damage in Markovia. 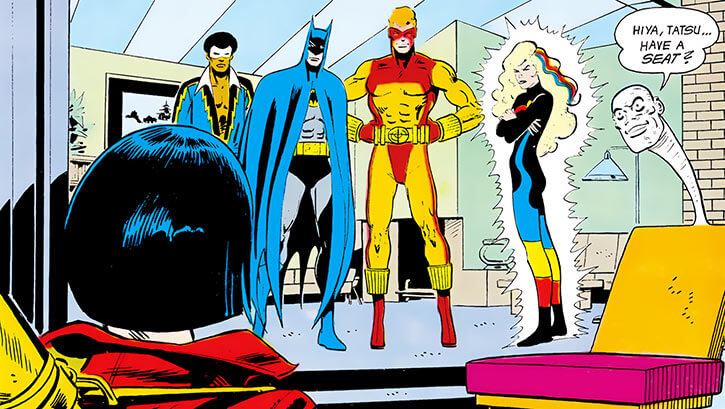 When the multiverse started coming apart, the Outsiders joined the massive effort to stabilise it.

Early on, this chiefly meant rescuing civilians from disasters, time warp invasions and shadow demons. Then came the battles against the army of super-villains led by Brainiac and Lex Luthor.

The Outsiders were still standing during the failed fight against the Anti-Monitor, which resulted in only one Earth being left. And they helped repulse an immense, final army of shadow demons, until the Anti-Monitor was defeated at last.

The shift from Earth-1 to New Earth had little impact on the Outsiders. Unlike with, say, Infinity Inc..

But they still had to reinvent themselves without Batman. Which is covered in the next part.

Killing Combat and the Outsiders

The series has a strange stance about Killing/Bashing Combat. Going through the roster :

Yet at the same time :

This isn’t rare in US fiction of that time. There’s often a tension between admiring the nobility of non-violence (provided that it wins, of course) and craving for the sight of “bad guys” being slain left and right.

This is somewhat explicit in Outsiders in-house adverts. As per the Reagan-era rah-rah chest-beating, we’re told that it’s finally a “proactive” super-hero team, and “The Hardest-Hitting Super-Team Of All !”. But the actual material is fairly standard Bronze Age super-hero storytelling.