The Cadre are the agents, strike force and bodyguards of an alien being called the Overmaster. The Overmaster visited Earth twice in recent decades, and claims responsibility for mass extinction events in the distant past.

There have been two cohorts of Cadre members, plus some ancillary Cadre-like teams of superhumans.

The nature of the Overmaster is an enigma. The two main hypotheses are:

In the first encounter with the Overmaster, the JLA veterans estimated that the creature facing them did not have the raw power to be whom it said it was. In particular the reliance on human agents and enormous machinery did not seem compatible with the feats of eradication that the Overmaster claimed to be responsible for.

The Overmaster could also be harmed by a man-portable laser cannon. Though he was clearly powerful, he couldn’t be called a god.

During the second encounter, Darkseid stated that the Overmaster could destroy all life and was roughly his equal in power. Darkseid added that he kept himself ready for the day when the Overmaster would come and try to judge Apokolips. How this fits with the previous encounter is unknown.

The Overmaster was considerably more powerful than the first time around. He could among other things freeze all deaths and births planetwide.

Compounding the issue, the first encounter took place pre-Crisis on Infinite Earths. Thus, the story may have taken place in a slightly different way in the post-Crisis continuity.

Most members of the Cadre apparently received their abilities from the Overmaster.

It seems that the Cadre powers can be transferred from one person to another without assistance from the Overmaster. On several occasions, new Cadre members appeared, with powers and looks practically identical to that of deceased Cadre members (such as Shatterfist II succeeding Shatterfist I, or Starshrike succeeding Shrike III). 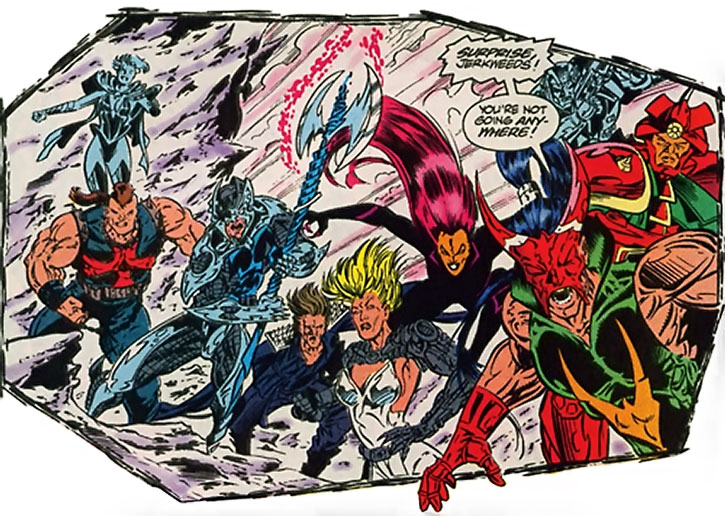 Some such cases seem to be continuity errors – deaths that were forgotten about or ignored. Yet, a No-Prize hypothesis  suggests itself. Most Cadre agents wear similar metallic bracers, which appear to be the source of their powers. This is especially visible for Black Mass and Nightfall.

It is thus possible that :

The main alternative to this No-Prize hypothesis is that the Cadre members can resurrect themselves, and thus return after having been seemingly killed. This seems disproved by Shrike. Starshrike is clearly a different person, and the original Shrike was later seen as a zombie during Darkest Night.

Members of the Cadre tend to demonstrate new tricks with their powers from one appearance to the next. Examples include using gravity control to form energy blasts, developing telekinetic control over psionically  charged weaponry, or buying the Winged Limitation off Flight. Thus, slightly extending their répertoire from one appearance to the next in your campaign would not be outrageous.

It is possible that the original Cadre members have access to what remains of the Overmaster’s first base. It is an extensive high-tech headquarters hidden within a mountain.

The Overmaster has allegedly visited Earth several times in its distant prehistory. He stated that he repeatedly judged Earth life to be unworthy, cryptically declaring each time that “they want[ed] too much”. 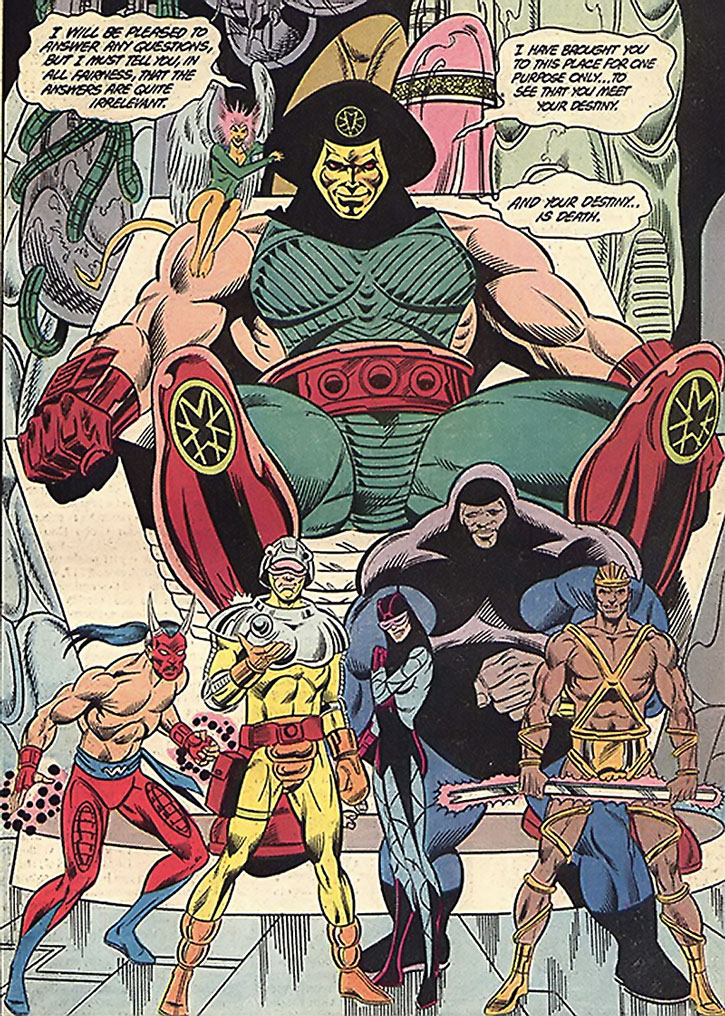 Though the Overmaster’s judgement supposedly destroys all life, the actual consequences were less dire. The Overmaster claims responsibility for the following mass extinction events:

The Overmaster’s first known contact with humanity took place just before the Crisis on Infinite Earths. He landed somewhere in the Arctic of Earth-1, and erected an enormous mountain base without being detected.

He then recruited a number of operatives, appearing to them as a destructive ball of energy that promised them power. Fastball, Black Mass, Shrike, Nightfall, Crowbar and Shatterfist were thus assembled as the Cadre. He took them to his ship, where they trained to become a fighting team.

To help determine the worthiness of life on Earth, the Overmaster had some Cadre members attack the Justice League of America. This team had recently relocated to Detroit. He then teleported the League to his base and sicced the whole Cadre on them, forcing the inexperienced League to retreat deeper within the base.

There, they found another alien creature. When JLA ally Gypsy touched a telepathic structure above that creature at the Martian Manhunter’s request, the Overmaster and the Cadre disappeared in a flash of light.

Whatever happened to them wasn’t documented. But they soon appeared again as part of the army of super-villains assembled by Luthor and Brainiac during the Crisis on Infinite Earths. Perhaps the two master villains rescued them from whichever place they had been sent to. 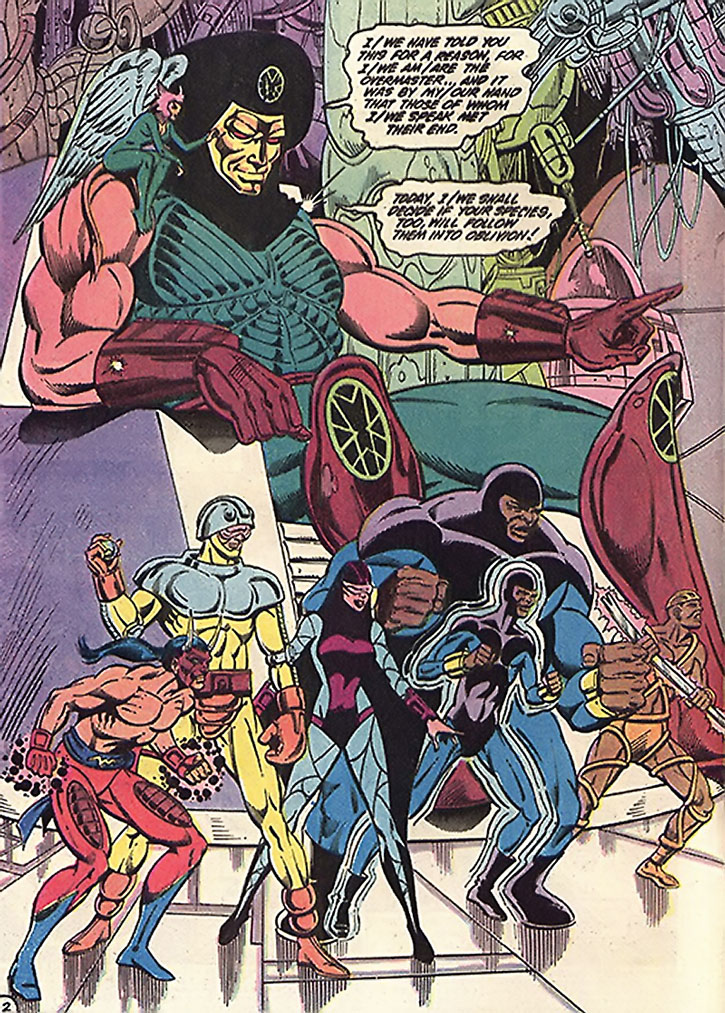 The contributions of the Overmaster and the Cadre during the Crisis are largely undocumented. Mostly they were seen in group shots and snippets of battle scenes.

The Cadre members apparently became super-villains on New Earth after the Crisis was over, though they did not appear in stories for years. As to the Overmaster, it would seem that he left for outer space, only taking Shatterfist I with him as his agent.

In 1993, the Overmaster again set his sights toward Earth. His stated goal was to eliminate humanity. He considered that it had reached the end of its natural life and shouldn’t be allowed to evolve further.

His physical arrival (on a gigantic spaceship, that also carried Shatterfist I) was preceded by psychic manifestations. These caused nightmares in sensitive subjects, but their main goal was to contact, empower and in some cases fund allies that would test and soften up Earth’s defences.

Ewald, brother to Ice (Tora Olafsdotter) and prince of a lost tribe of magic-using Norsemen. Ewald, in the name of his “dark master”, captured his sister and triggered a revolution, using bracers and a staff empowered by the Overmaster. He also killed King Olaf.

This triggered a successful intervention by the JLA to free their team-mate Ice, during which Ewald was killed by a power backdraft.

Connected with Dreamslayer, the head of the Extremists, those were a new roster empowered by the Overmaster — Brute, Cloudburst, Death Angel, Gunshot and Meanstreak.

The New Extremists backed the corrupt military dictator of the island nation of Seylone, but were dispersed by the Justice League America. They continued to appear as servants of the Overmaster until the end.

(“Their” Dreamslayer is the original one, not the later Dreamslayer). 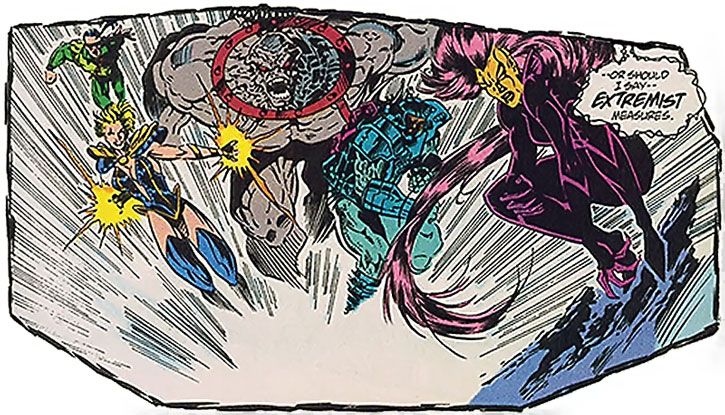 The Flock of the Machine

Tn American cult headed by one Brother Randolph. It was apparently started just before the 1984 appearance of the Overmaster. These zealots looked forward serving the Overmaster when he would come and impose a new world order. Randolph built a giant transmitter tower using alien tech, which he used to repulse Federal police investigating the cult’s compound.

When the Justice League showed up, the Overmaster powered the cult’s sacred transmitter, allowing the banished Dreamslayer to partially manifest on Earth and strengthening the Overmaster’s psychic influence on Earth. Dreamslayer summoned in turn the New Extremists, but Brother Randolph realised he had been duped and sacrificed himself to destroy the transmitter.

The Overmaster banished Dreamslayer back into an infernal dimension since he was too dangerous, though he kept the New Extremists.

A team assembled by the Immortal, a man claiming to be the legendary Prester John. Its members were the Druid, Mahayogi, Seneca, Xiohtecutli, Phalanx, Osiris, Musashi and Mohammed ibn Bornu, all based on archetypes and legendary characters from antiquity.

Many of those agents quit the Cadre in protest, or even allied with the Justice League when they attacked the Overmaster. I don’t think they’ve ever been seen since.

A group of enforcers working for White supremacist movement the Aryan Nation – Backlash, Blind Faith, Golden Eagle II, Heatmonger, Iron Cross. Luring in or kidnapping a number of biochemists, they succeeded in devising a deadly virus that would kill those of non-Northern European descent.

The FBI monitored this conspiracy until their agent infiltrating the movement was telepathically detected – then executed. The Bureau had a low-profile Justice League Task Force team sent in, but bad luck led to detection and a battle. The Leaguers narrowly prevailed thanks to the retired Hourman (Rex Tyler), and the virus plot was defeated. 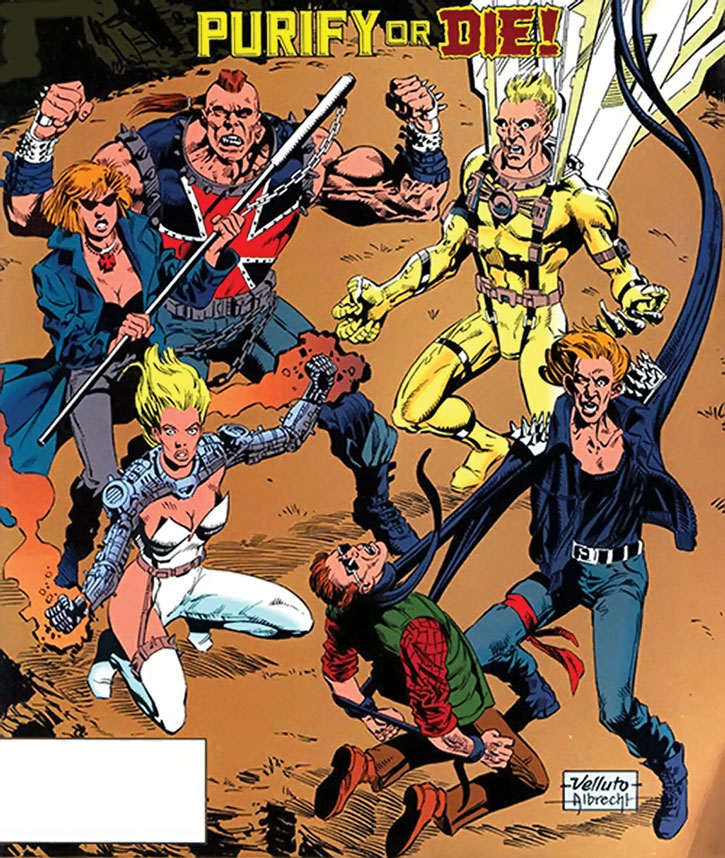 A handful of isolated subjects were also empowered, their actions undocumented until the Overmaster landed. The main one is Jack Snyder, who became Devastator.

With the exception of Shatterfist, who had never left the Overmaster, the old Cadre members were never summoned and did not show up during the crisis.

The mothership has landed, part 1

Earth shook as the Overmaster’s city-sized spaceship grazed it then crashed into Mount Everest. The city of Kathmandu, close to the impact point, had already been subjected to severe psychic shockwaves and was devastated. 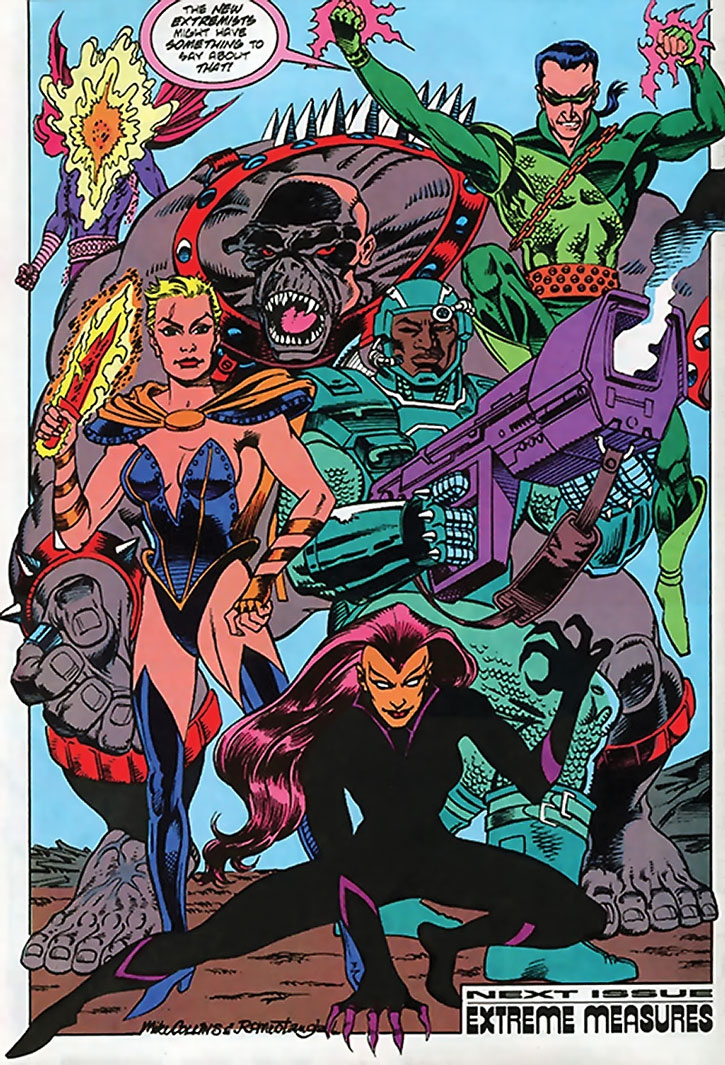 At that point the JLA had activated all reservists and coordinated all allies to repulse the Overmaster. In response, the alien summoned all of his servants to him, thus assembling an extended version of the Cadre.

The Overmaster’s actions triggered a number of catastrophes, often involving persons believing that it was the end of the world. One of the most devastating was a massive march of Indians (chiefly from Kathmandu) toward the sacred city of Benares , in the hope of ritually purifying themselves before the end. This was encouraged by some form of low-key mind control from the nearby Overmaster.

The mothership has landed, part 2

The Overmaster announced the imminent end of the human race, and that any attempt to stop him would just hasten the process. As a result, the UN forbade the Justice League from attacking. Meanwhile the Overmaster suspended all deaths and births across the globe.

The crisis devastated the Justice League and its allies. Booster Gold was killed by Devastator – though the suspension of deaths prevented him from actually passing away. The League split over irreconcilable differences as to whether follow the UN’s orders.

Gypsy was lost and left for dead in the snow during an assault. Metamorpho sacrificed himself. Ice was briefly suborned by the Overmaster and became his agent, but she later managed to turn against him – only to get killed.

In the end, the brand new Amazing Man (the grandson of the original) managed to beat the Overmaster by draining his power and using it against him. Then, the Blue Beetle derailed the countdown to destruction, blew up the Overmaster’s main ship and evacuated everyone in an enormous escape pod, which served as the new Justice League satellite for a while. 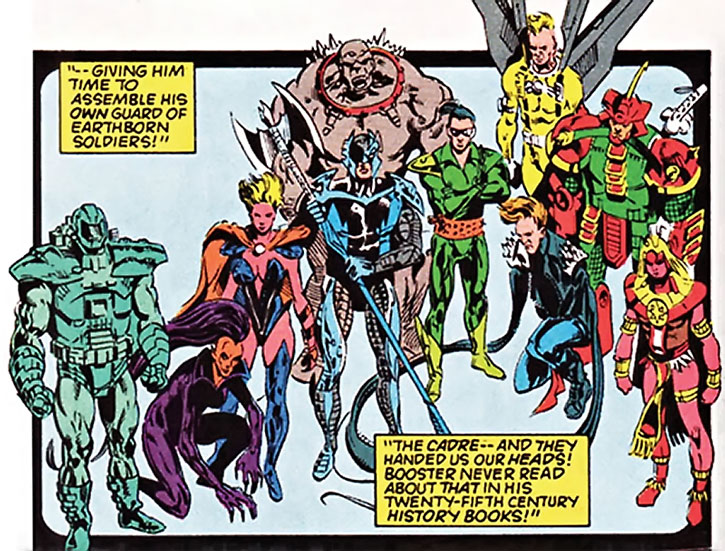 The Cadre members were apparently left behind in Nepal.

The Overmaster was briefly glimpsed again in 2007, when a psychic force assembled all aliens living on Earth to turn them against humans. It is possible that the Overmaster, greatly depowered by his clash against Amazing Man and the destruction of his ship, has stayed on Earth and out of sight ever since his defeat. Or it might just be a minor continuity mistake. Or an Easter egg.

The very first Cadre continued to operate as a team, as did the White supremacists formerly with the Aryan Nation. Some members of these groups also appeared as solo villains.

The original Cadre, led by Crowbar, resurfaced with two new members. Shatterfist II replaced Shatterfist I, who had been killed by a temporarily insane Ice during the Mount Everest fight. Starshrike replaced Shrike III, who had various solo misadventures, was arrested, and got killed whilst serving on the Suicide Squad.

In 2002, the Cadre was working for Doctor Polaris, but they decided to turn against him to increase their profit. All the bad guys were stopped by the Power Company. 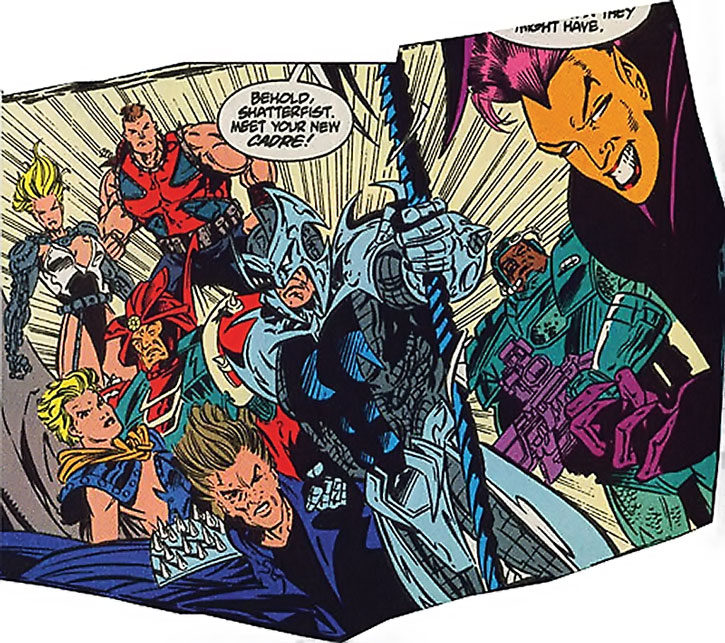 In 2008, persistent rumours of government kidnappings rocked the supervillain community in the US – including the ex-Cadre operatives. Several tried to flee and were kidnapped, other banded with sundry villains for mutual protection.

One such group even crashed the HQ of the Justice League to request sanctuary. Captured villains were dumped on an alien planet. Though there were casualties the villains eventually made it back to Earth.

There have been but scattered sightings of Cadre members since. 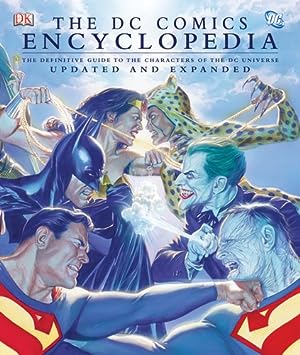 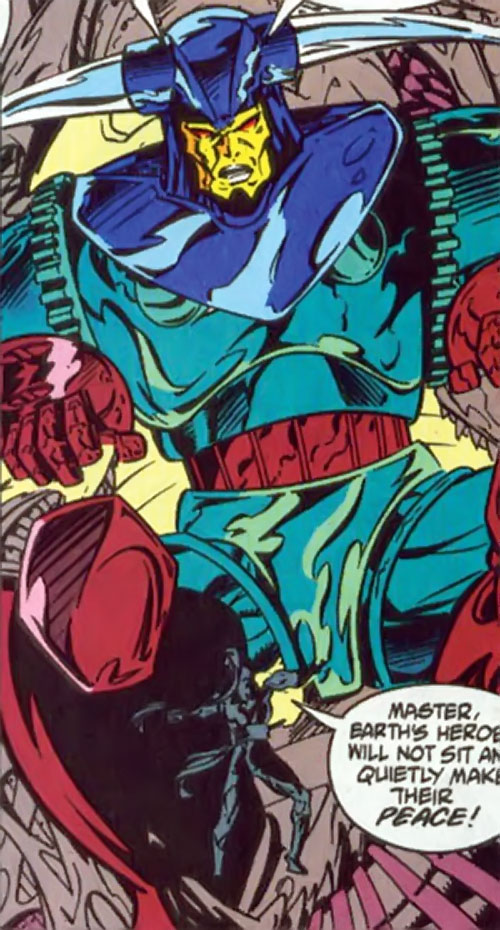