Overrider is a mutant. He can control electronic systems with his mind over a short distance. He can bend most robots and computers to his will. In the case of the TESS-One robot, he preferred to give it vocal orders, but he could also operate it silently.

Overrider has also been known to shut off the high-tech guns used by some opponents (such as S.H.I.E.L.D. plasma weaponry) or sophisticated security systems.

In DC Heroes RPG terms, most non-sapient  systems have a OV/RV of 04 or less against this. But systems specifically hardened against psionic  interference can go a fair bit higher. The OV of robots can also go higher for orders that are against their programming. Sapient robots will use their normal OV/RV vs. Control.

Overrider’s Control is broken if he gets beyond its Range, is knocked unconscious, falls asleep, etc..

Overrider’s power also makes him excel with sufficiently sophisticated vehicles. It presumably works by intuitively co,trolling their manoeuvrability-enhancing systems, such as flight control.

Even in the middle of combat Mr. Rennselaer prefers to operate from his small flying vehicle (a sort of hoverboard, though it can reach an altitude of several meters). He’ll often ram people with the board – it seems to be armoured to a degree. He moves like a pro skater.

This vehicle seems to come from S.H.I.E.L.D.. One assumes that Rennselaer retained illegal access to S.H.I.E.L.D. stocks after retiring, thanks to his power.

Richard Rennselaer is a mutant with an ability to mentally override electronics. He became a S.H.I.E.L.D. agent in the early days of the operation. He was 46 in a story published in 1986, indicating he might even have been recruited by Nick Fury’s predecessor, Col. Rick Stoner. His rank was unrevealed.

His mutant abilities remained unknown to his employer. This was presumably as a combination of Rennselaer controlling the detection equipment, and of having joined before the anti-mutant paranoia. He retired in his 40s. This presumably was thanks to the S.H.I.E.L.D. benefits package and/or his son’s medical condition.

Father do you think they’ll drop the bomb

Rennselaer has a young son, Johnny. The child was apparently born in the mid-1970s. During the 1980s Johnny came to suffer from nuclear psychosis. This was a withdrawal from reality triggered by an overwhelming fear of nuclear annihilation.

Though treated at the Vollman Center for Disturbed Children in West Virginia, he remained unresponsive to communication, even from his father, and the desperate Richard came up with a plan to restore his son’s sanity.

Designing a costumed identity as the Overrider, the mutant ex-agent tried to destroy nuclear weapons. His plan came together after he located a secret cache in the Midwest. It was a wartime underground installation filled with deathtraps and housing the abandoned TESS project.

Overriding the huge TESS-One combat robot, he moved on to the next phase of his plan. He loaded TESS-One in a 18-wheeler, then used his powers to drive into the main plant of Adametco in New Jersey as a delivery truck.

There, he forced the employees coat TESS-One with millions of dollars in Adamantium . That turned the huge combat robot into a nearly indestructible juggernaut.

By this point, he had already attracted the attention of Captain America (Steve Rogers) and Wolverine (James Howlett). Both had independently tracked him down to Adametco. Though TESS-One was programmed to kill Captain America, Overrider forced it to leave.

Overrider then proceeded with his main plan – to attack and destroy the US’s nuclear command center. Overriding security measures, he sneaked TESS-One in, then had it conduct a major diversion. With everyone occupied, Overrider invaded the command room. He demanded that the missiles be launched, inert, into the ocean – lest he detonate them all within the silos.

However, he was stopped by Captain America and Wolverine, and arrested.

You don’t have to put on the red light

In 1992 Overrider joined Roxxon-employed terrorists and mercenaries led by Angar the Screamer. 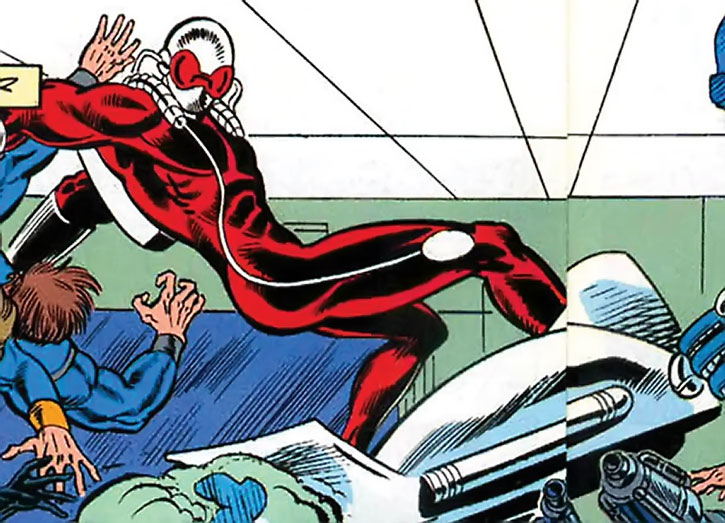 These briefly managed to take over the S.H.I.E.L.D. ’s Helicarrier in a daring commando strike. But they soon were defeated by two senior S.H.I.E.L.D. officers (Nick Fury and G.W. Bridge) and three superhuman recruits (Knockabout, Violence and Psi-Borg II).

His abilities were instrumental in the invasion. But once the mercs took command of the vehicle, Rennselaer realised that S.H.I.E.L.D. computers were now psi-hardened. Overrider was presumably arrested and judged for treason.

During the massive depowerment of mutants that followed M-Day, Overrider was one of those who lost his powers. These were later harnessed by the Collective.

A fairly smart and competent mercenary. He does his job with few illusions about the risks and reward of the life he has found himself in.

He’s not a violent person, and certainly not a casual killer. During his daring break-in at Adametco, he was, well… adamant that TESS use the lowest level of viable force.

Overrider seems to have some small degree of empathy with machines. He called TESS a “she”. He seems to care about the machines he used for some time, like a driving enthusiast’s favourite car.

In his initial appearance Overrider was desperate to cure his son. His plan was not terribly rational and that was noted in-story. He seemed much more grounded in his second appearance, though what happened to his son is unrevealed.

“I call myself Overrider, friend. I’m going to be accompanying you to your destination.”

Some of his Skills (the non-Powered ones) were not demonstrated. They logically follow from his past as a S.H.I.E.L.D. agent and have been added for coherence’s sake. 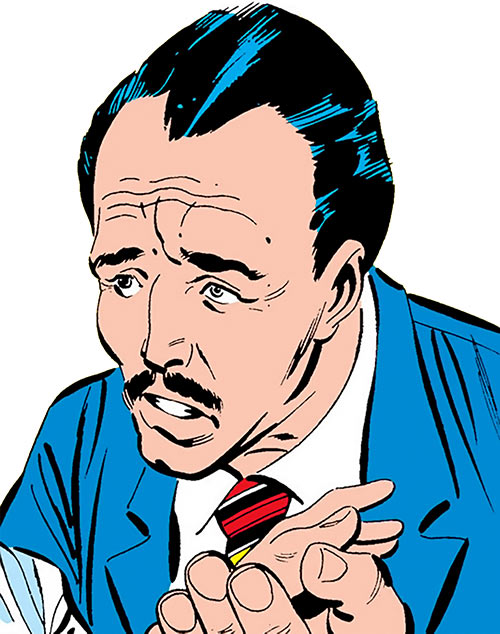