Overthrow is an adept athlete and hand-to-hand combatant, with excellent reflexes. From one of his remarks it would seem that he built his own gear, possibly thanks to access to Manhunter tech.

Overthrow wears a padded and armoured suit that is essentially bulletproof. But he can be staggered by sufficiently powerful attacks.

The armour is also equipped with jet boots (on the sides of the calves), and a specially designed poly-ceramic cesta. Later on, Overthrow upgraded to one cesta on each forearm. These normally rest against the forearms. The cestas can be deployed by pressing a button on the side of the knuckles with the thumb.

This cesta (loosely similar to those used in jai alai or pelota ) is very resilient, and has some unusual applications. The power systems in the armour can generate a seemingly unlimited number of smouldering plasma bombs, which can then be thrown just like a pelota. Those balls of energy are like super-hand-grenades, and have a a tremendous destructive potential.

A surprising application of the cesta is that it can catch most ranged attacks. This even worked against a large number of bullets, or a blast of compressed air. It can them hurl them back or dump them elsewhere. That doesn’t seem to work for projectiles too large to fit into the cesta. One example was a hubcap that Blue Beetle once threw at Overthrow.

I would guess that the cesta also generates a magnetic containment field destined to hold the plasma balls. This would allow Overthrow to catch and handle projectiles that couldn’t be manipulated by a merely physical cesta.

He can also Block with the cesta, if he can react in time.

Some of the plasma balls can be super-charged and delayed, acting much like bombs. They are less volatile that normal plasma balls that explode on contact. Thus, they behave much like a heavy ball of molten metal until they explode. Overthrow can generate those just like ordinary plasma balls, and throw them with great accuracy.

Given the nature of those bombs I have assumed that they required special training to manipulate. It is possible that they are delayed because they need several minutes to build up the extra destructive potential over a standard plasma ball.

I would also assume that the charge, duration, etc. are set using cybernetics in the mask when it’s not a standard plasma bomb. For normal plasma bombs, just thumb-pressing the button on the side of the armour’s knuckles is sufficient to have one drop into the cesta’s basket.

One of Overthrow’s usual techniques is — in DC Heroes RPG terms — to Flail with a barrage of plasma balls. This gives him an high enough AV to force his opponent to go Acrobatics (Dodging) and thus keep them at a distance and on the defensive.

The anarchist bomber Overthrow started his anti-corporate struggle in 1987. He attacked high-tech contractor Kord, causing significant damage. Overthrow was repulsed by the second Blue Beetle (Ted Kord). Casing his target had been easy — as Beck, Overthrow worked on the loading dock of Kord, Inc.

Some weeks after that encounter, Kord learned that Overthrown was also a Manhunters agent, assigned to monitor him. Why Overthrow joined the Manhunters is unrevealed. I’d assume it was an alliance of convenience.

Presumably, the Manhunters needed to recruit somebody in a hurry to follow the recently-emerged Blue Beetle, and Overthrow was interested in a support network. This is just an hypothesis, though. The links between Overthrow and the Manhunters may well go back further, and they may even be behind his tech.

Overhtrow tried to prevent the Beetle from going to Iran as part of a mission to protect the persons chosen during the Millennium event . He failed — though the Beetle also failed in his mission. 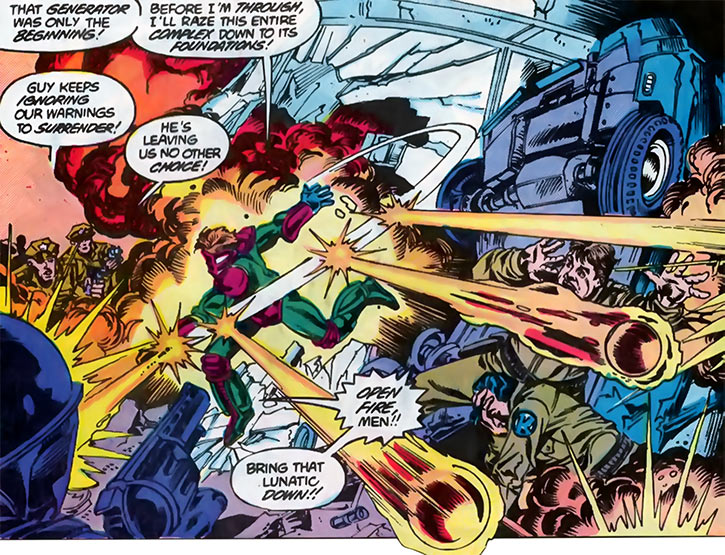 Overthrow soon returned with a squad of Manhunters. Their goals was to prevent Blue Beetle and Mister Miracle from converting a Kord probe into a vehicle. Such transportation would allow the super-heroes to reach the Manhunter base deep within the Earth’s crust.

Initially, the Manhunters managed to stop and capture the two heroes. But Overthrow inexplicably decided to lock them into the converted vehicle’s shield to die. The heroes escaped, then stopped and unmasked Overthrow. He was presumably arrested.

Anarchy in the RF

Overthrow was not seen again for more than a decade and a half. In 2005, he struck Moscow. From context I think it was retaliatory strike for the war in Chechenia. He was halted by Rocket Red (Pushkin), but escaped.

Shortly after that incident, Maxwell Lord decided to have some diversion to throw the JLA off his trail. Thus, he had one of his OMACs ambush and kill Overthrow, cleaving him in two. At the same time, the JLA learned that Ted Kord had been killed, and would soon realise Lord was also behind that.

Overthrow’s costume was left largely intact and lying in a Moscow back alley behind a night club.

The big red hair is a wig, attached to his mask.

Overthrow was one pissed-off anarchist, angry at the absurd and miserable state of the world. Thus, he was striking back at the powers that be. Inevitably, he slowly evolved into a bitter terrorist and mercenary.

He struggled against corporations and governments alike. He was definitely not above threatening innocents to get heroes off his back, and has in fact done so at least twice. Successfully, too.

As a Manhunter he seemed to be every bit as loyal and psychologically conditioned as any other Manhunter. He fanatically followed orders and chanted the tiresome slogans of the cult.

“Mindless morons ! They fill their minds with the maddeningly mundane, comfortable in their excesses… while most of the world struggle daily to survive ! It’s these witless pawns of the American military-industrial complex who make my mission necessary… who make me wonder why I have waited so long to act !”

“Go ahead, you corporate lackeys — enjoy yourselves ! All the firepower in the world can’t hurt me !”

“No man escapes the Manhunters !”

“Moscow shall reap what it has sown !” 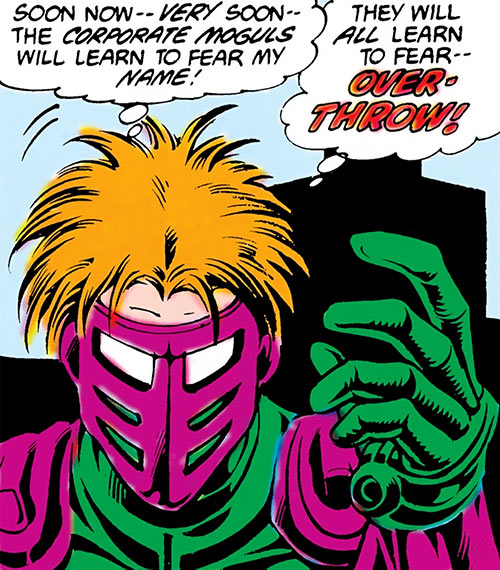 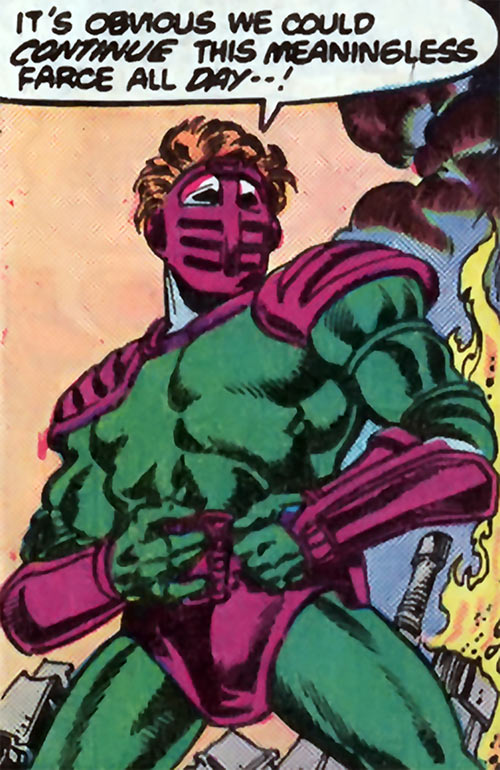 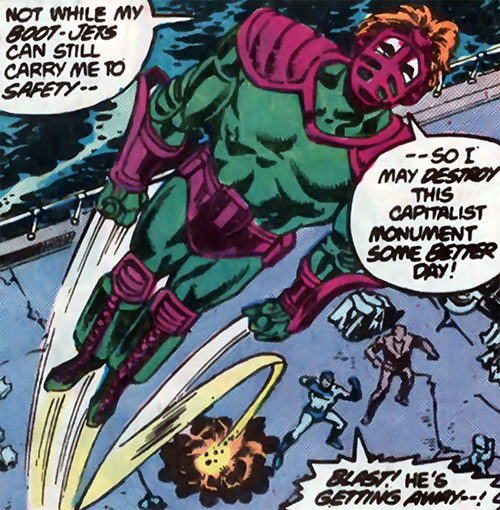