This profile is part of a chronological series, which should be read in order. The series goes :

This way, everybody can use their favourite version of the Owl. And we have room to digestibly discuss his ever-changing gear, bases and medical issues.

In 1982, the Owl starts using steel claws. These are three blades affixed to a bracer, looking not unlike Wolverine’s claws. They’re sharp enough to slash through Spider-Man’s webbing if it didn’t have time to harden.

The Owl excels at using the additional reach for fast melee attacks.

In 1989 he experiments with a system that can also shoot his claws and bracers as a surprise ranged attack. 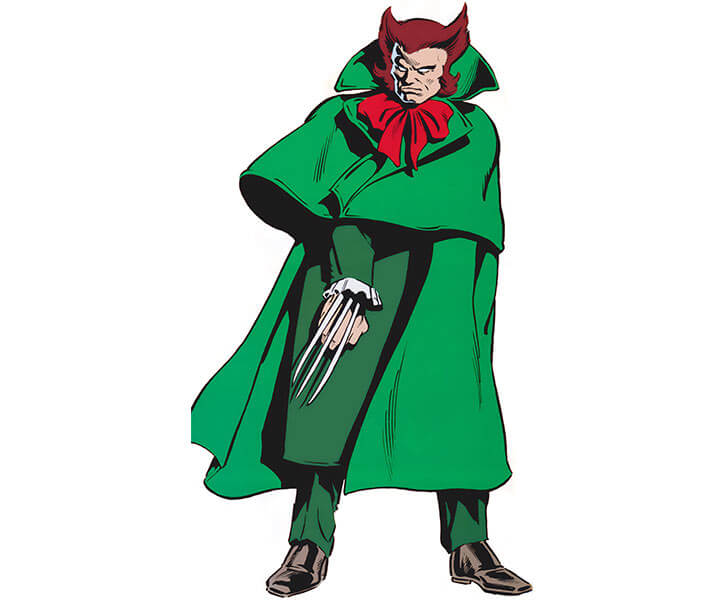 The Owl has recovered enough to walk – but only with leg braces on. This is slow and stiff, but it’s much better than before.

Since the Owl is seen delivering kicks whilst in flight, or landing from a height, the braces presumably have shock absorbers.

At this point, the Owl can clearly see in the dark. Based on his later mutations, we’ll assume it was a new power he gained over the years. Rather than, say, wearing special lenses.

He also clearly demonstrates falconry-style bird handling skills for the first time, using owls. Which is indeed a thing that can be done. Though it’s not the same techniques as with other raptors.

In 1983 at the latest, the Owl had regained control over his original Aerie, on the Hudson Palisades.

It housed by far the largest Owl Gang so far, with at least 30 men.

Some of these guys were armed with batons ending in owl-like talons, which seemed super-heated.

By 1987, it also sported a vast collection of taxidermied raptors. Plus fast steel shutters to close windows, and a freezing gas trap.

Some signature 1982 music for that chronologically correct atmosphere…

Journey’s Don’t Stop Believing definitely counts. It’s… very early 1980s, stylistically. But a surprising range of people still like it to this day, not all of them olds.

He also made progress to ally with Doctor Octopus (Otto Octavius) and his gang. In the Owl’s view, such an alliance was the only way to take the Kingpin (Wilson Fisk) down.

The Owl also sought to capture Boomerang (Fred Myers) who had inside info about the Kingpin’s staff, but Spider-Man (Peter Parker) foiled that.

However, Octopus ultimately rejected the offer. A war erupted between the Owl Gang and the Octopus Gang.

They both raced and fought to procure the triggers to a nuclear warhead, with which to blackmail New York City. The Owl was furious, feeling that Octopus had stolen his plans and preparations.

Then a wild card came in. Black Cat (Felicia Hardy) stole one of the nuclear triggers. She had realised that Octopus wasn’t planning blackmail, but to detonate the weapon.

The gangland war to get the triggers escalated, with the Octopus Gang storming the Aerie. Given the stakes, the Owl fought Octopus. Though he gave a good account, he was overpowered and severely wounded.

Octopus was in turn mauled by Spider-Man, furious over Octavius having wounded Hardy. 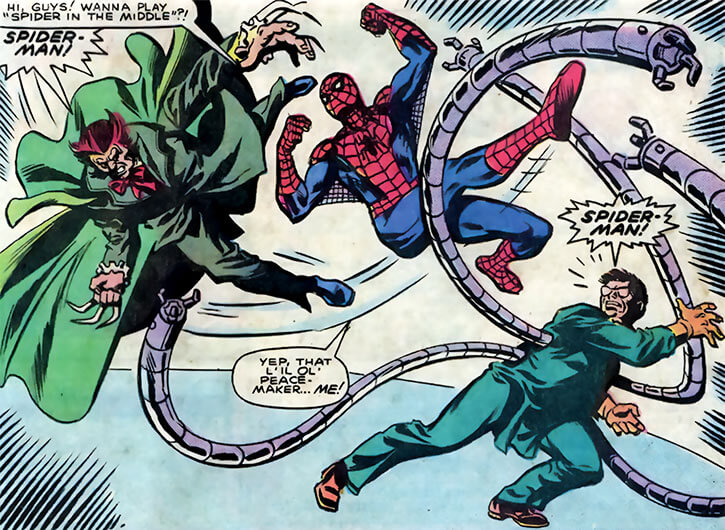 A family of trees wanting to be haunted

A heist-for-hire had gone wrong. After a clash with the NYPD, the Owl and his contacts were defeated in a warehouse by the three responding heroes.

The Owl’s car had two little kids on the back seat, which were thought to be his. This is an important plot beat, since it leads to Jones and Cage dating.

(Ms. Jones ensured that the kids could sleep safely and would be spared a night at the police station before they could be returned to their family. They seemed fine, and were mostly interested in watching a movie on Jones’ VCR  .)

In 1987, the Owl kidnapped Martha and little Billy Connors.

This was to force Curt Connors to give the crime lord the Lizard regenerative formula. The Owl intended to use it to finish healing his legs, and perhaps gain more impressive powers.

However, he didn’t know that Dr. Connors had gained significant control over his Lizard alter-ego in recent months. The Lizard and Spider-Man thus attacked the Aerie.

The Lizard was forced into hibernation by the freezing gas the Owl had prepared. But his human willpower allowed him to recover in time to protect his family. 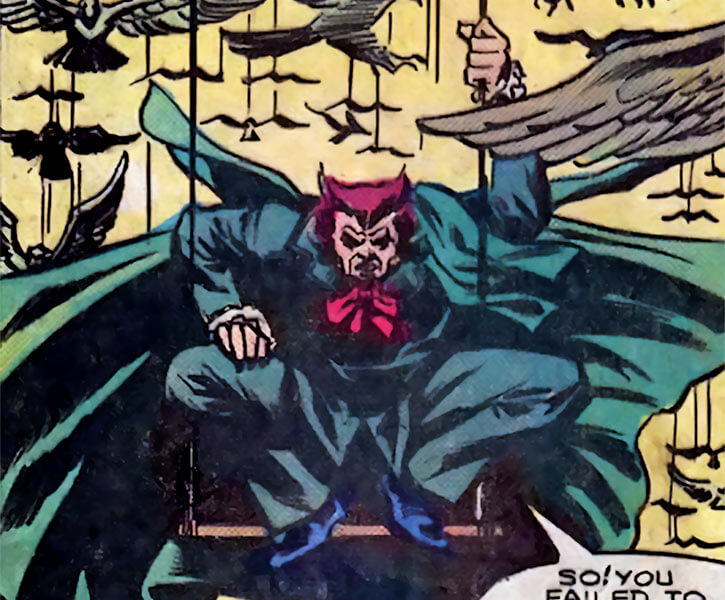 This setup is quite similar to that of obscure Superman enemy Night Owl.

In 1989, the Owl attempted to steal millions from crack cocaine traffic. This was to fund the implantation of artificial wings that could turn his gliding power into full flight.

To do that he hired the Bombers, a “this is your brain on drugs  ” youths gang with specific demolitions expertise.

The Owl had extensively documented the dead drop locations of the Cannibals gang. He thus had the Bombers steal the bags of cocaine, and replace them with identical bags filled with talcum powder and small quantities of explosive.

The Owl and Bombers would then demand $5M to give the coke back and defuse the bombs.

Howbeit, Daredevil (Matt Murdock) got involved. Though the Owl got some licks in, he was defeated.

But the villain then shot his claws at a random homeless guy. This forced Daredevil to let the criminal escape so as to save the unsuspecting target.

The Owl, Nekra, Asp (Cleo Nefertiti) and Scorpion (Mac Gargan) were magically influenced by Llan the Sorcerer to go to Canada.

They had no idea why they had this sudden urge. Given this motley lineup, it is possible that they share some obscure mystical commonalities. Like a prehistoric star sign or something.

However, Alpha Flight was magically forewarned. They thus intervened before the rampages could truly begin. The Owl was overpowered by Vindicator (Heather Hudson) then Sasquatch (Walter Langkowski).

Witchfire (Ananym) then dispelled the Sorcerer’s spell, knocking all the villains out.

Mere weeks later, in 1990, the Owl was caught in a similar misadventure. Mind control technology had sundry villains attack the Fantastic Four in Washington, DC..

They were all too dazed to pose much of a danger. When the control was broken, none of them had any idea of what they were doing there.

Over the following two years, the Owl’s serum-induced mutations suddenly accelerated, warping him. This led to a turning point in his career… OR DID IT ? 😺 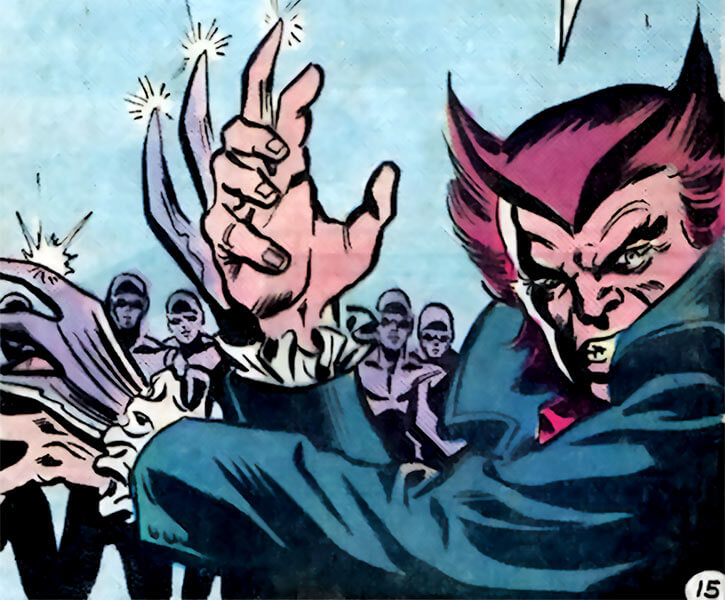 By the close of the 1980s, the Owl has recovered enough that his medical condition is not as overriding a concern.

He starts thinking of himself as an older, classier breed of criminal. An elegant villain from a more civilised age, as it were.

He also develops an interest in having more raptor-like abilities, which he considers beautiful and pure. In fact, this may have led him to experiment with his serum anew, not having learned the lesson from decades of severe medical complications. 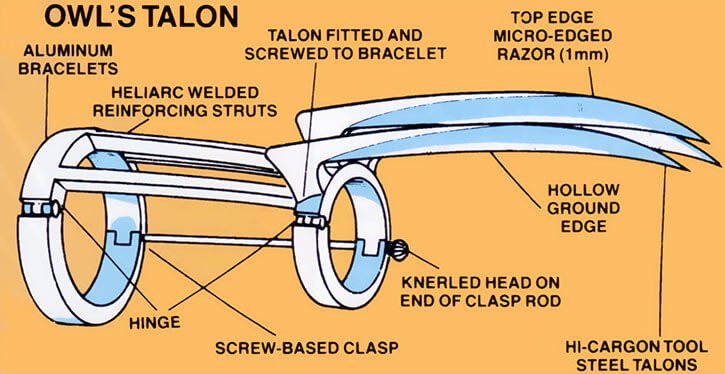 By 1982, the Owl has recovered enough to walk when he has his leg braces on. But this is stiff and slow. He has a Partial Loss Vulnerability that limits his DEX to 03, STR to 02 and land speed to 01 when walking.

However, these penalties are lifted when in the air.

He still has an SPR, but his braces limit that to an MPR (fatigue, can’t do certain movements, etc.) when worn.

(His Jumping power being about cancelling gravity, he can use its full APs even with his legs badly damaged. So those APs aren’t diminished by the Partial Loss Vuln.).