This profile is part of a chronological series, which should be read in order. The series goes :

(We keep the “episodes” short so they don’t take too long to read. And so everyone can use their favourite version of the Owl.)

This entry corresponds to an era with relatively few appearances. But during these, the character was evolving in a markedly different direction.

Circa 1991, the Owl’s gliding serum mutated him. This was faster, and much more thorough, than the previous damage to his legs.

Many of these characteristics aren’t exactly those of owls. He’s mutating toward a hybrid form with nocturnal raptor characteristics, but not precisely a horned owl. 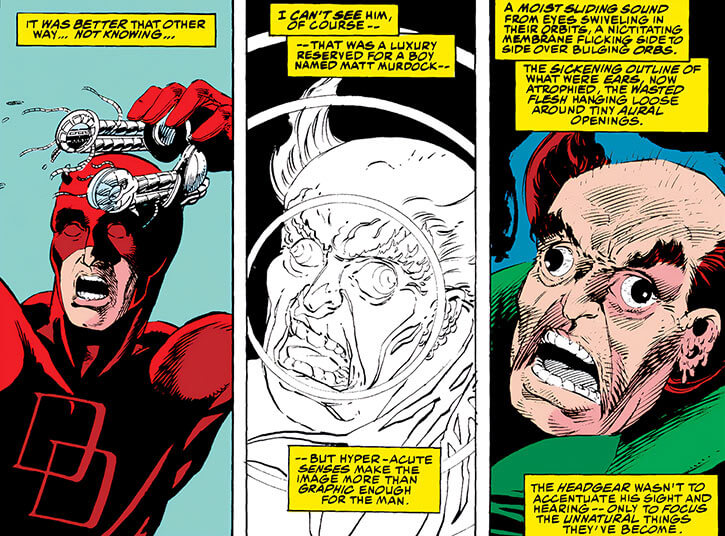 Mutation, demon magic, or both

In 2001, the Owl seems to have mutated a bit further. Possibly maybe. It’s hard to say, and there’s a sense that the mutations were cancelling the more animalistic traits.

During his 2001 appearance, the Owl wasn’t using his goggles or steel claws.

The 1992 Aerie is the top of an unfinished skyscraper in Queens, its construction suspended by a strike. The Owl lives here much like a homeless man in an alley. There’s even a campfire-within-a-metal-drum, for warmth.

The Owl brought there a number of crates, cardboard boxes and suitcases. These are filled with money, drugs, weapons, jewellery, spare clothes (all the same), personal items, etc..

Part of this stuff is from his old HQs, part is tribute and plunder from ex-Kingpin mobs.

There was a The Cure album in 1992, so it’s chronologically correct. Their music fits the Owl.

After his horrific mutations, the Owl remained in shock.

But he escaped in 1992, not long after the fall of the Kingpin.

Almost reflexively, he attempted to take over. But the chaos was too complete.

Frustrated, the Owl stalked a subset of the Kingpin’s former lieutenants. He murdered them one by one as they refused to serve him. The unhinged Owl thought of this as preying on pests to maintain ecological balance.

Daredevil (Matt Murdock) narrowly saved one such lieutenant. But the Owl escaped, in small part due to DD’s shock upon seeing his enemy’s alterations.

Mobster Pete London then allied with Daredevil to trap the Owl. But a surprise face-biting, followed by claws slashes, left DD bleeding and reeling.

Murdock thus had to improvise another trap, having dogs attack the Owl and force him back.

He then captured Owlsley in his Aerie. Having an identity crisis, the Owl more or less surrendered. 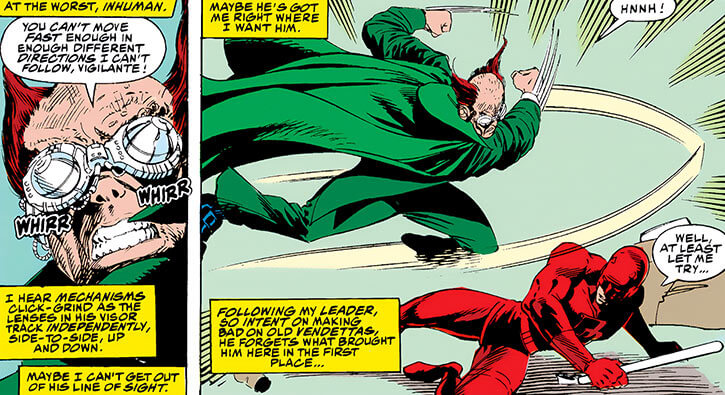 Original version of the goggles.

This spread fear among the underworld, as they expected him to resume preying on them. But he was busy dealing with maudlin resentment over how the existence of society was curtailing his freedom.

This led to a tentative alliance with the Vulture (Adrian Toomes).

The gentleman or the raptor

The rejuvenated Vulture was in the process of rejecting all ties to the old man he had been. The Owl thought that the Vulture had some sort of age-erasing tech to achieve this.

In actuality, the Vulture’s method was to murder most of New York City using a super-virus. If all persons who had known Toomes or Owlsley were dead, then the Vulture and the Owl would be free from Toomes and Owlsley.

The Owl balked at this. But the Vulture forced his hand. He poisoned Owlsley’s old rival Paul Greyson, and gave the Owl an alleged antidote. As the Vulture hoped, the Owl let Greyson die – rather than save him as Leland Owlsley would have.

However, the plan was foiled by Spider-Man (Peter Parker) and Daredevil (Matt Murdock).

Flying away, the Owl left the supposed antidote behind to save Spider-Man’s life. He claimed that it settled his debt toward Daredevil, for having helped the Owl back in 1992. 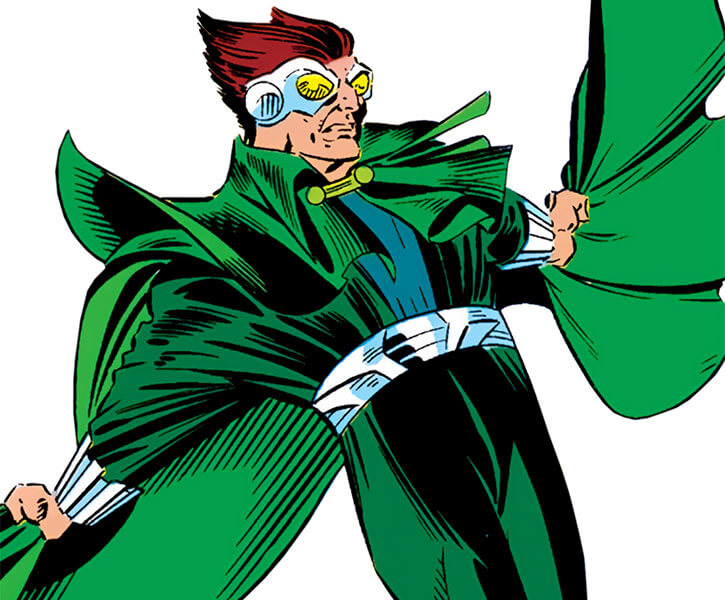 Later, sleeker version of the goggles and costume.

The quick and the dead

The Owl apparently had a major breakdown during the late 1990s. This may have followed another round of physical mutations.

While interned in a high-security asylum, he met with Gladiator (Melvin Potter) and Stilt-Man (Wilbur Day).

This “Gang of Three” became a “Gang of Four” when Copperhead (Lawrence Chesney) joined. But he was some sort of undead demon, and used magic to influence his allies.

A clash with Daredevil and Spider-Man degenerated as a small army of the Kingpin’s thugs, then the NYPD, came in.

Copperhead used the death and chaos to open a portal to an infernal realm. Demonic influence spread.

However, the Owl had realised what was going on. He rushed the undead Copperhead for having manipulated his mind. This attack saved Daredevil’s life, but the Owl and Copperhead were both sucked into the portal.

When Daredevil tried to save him, Leland Owsley declined. He instead went through the portal so as to take Copperhead with him. Before he vanished, he told Daredevil that he now wished to pay for the Owl’s sins.

In 1991, the Owl shaved off most of his hair due to shock. He eventually let it regrow, returning to his usual hairstyle.

In 1992, his goggles looked like prototypes. By 1994, they were much sleeker. Both versions hid his ravaged ears.

In 1994, his clothes/costume was tailored to hide the leg braces, the enlarged ribcage, etc.. Between that and the goggles, he didn’t look mutated.

By 2001, his appearance had degenerated. 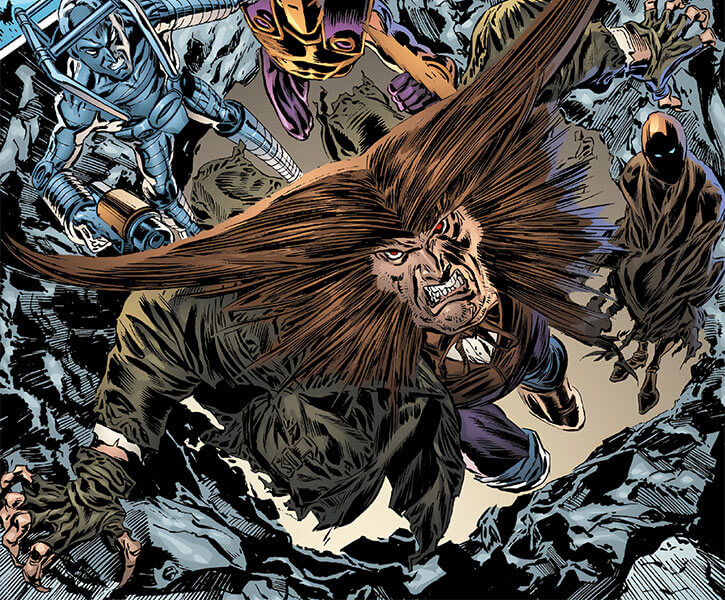 He eventually comes to grip with his sanity. But the main conflict of this era remains between Leland Owlsley and the Owl. It feels almost dissociative, as these two paths are so radically different.

Over the years, the Owl comes to recast his life as Owlsley as good and happy, but devoid of energy and freedom.

Of course, as often, “energy” and “freedom” are defined as the ability to freely harm and terrorise those of lesser wealth and power – and never respect anyone.

Thus, that he would again reject Owlsley and seek to be a “purer” Owl became inevitable. In 1994, he seemed to have made his choice.

In 2001, he evoked a wild-eyed axe murderer from the Bates Motel, the Overlook Hotel, or both.

But when he broke the demonic influence, he also briefly reverted to his Leland-Owsley-the-contented-family-man persona.

During this era, the Owl also feels like a recurrent Catwoman villain.

A key point in his 1992 fight with Daredevil is to rotate his head around and bite Daredevil, who is Wrestling him. This comes as a Blindside Attack, and the Owl pours a bunch of Hero Points into it.

This attack is made even more decisive since bleeding rules are being used.

The Martial Artist (EV) represents his somewhat talon-like hands. Claws: 04 would have been more intuitive, but using MA works better with Descriptors and for stacking with his Claws Gadget.