Owlman is well versed in numerous scientific arts. He is particularly skilled in the areas of gadgetry and designer drugs, and has a drug-enhanced super cortex.

He has built himself numerous weapons for his campaign against Commissioner Wayne and the Gotham City Police Department. He also contributed to the refining of the superspeed drug used by Johnny Quick.

Owlman also keeps himself in superb physical shape, probably at least in part through use of his own designer drugs.

The effect of this is that, in DC Heroes terms, all people of the anti-matter Earth have the equivalent of a Catastrophic Irrational Attraction to repaying debts when the marker is called. On those few occasions when people violate this rule, whatever passes for the local authorities will quickly bring the offender in for trial.

The Crime Syndicate of Amerika is the JLA of an Earth in an antimatter-universe where good is evil and evil is good. Benedict Arnold was the first U.S. President, Washington was a traitor, Britain fought for its independence against an Amerikan colonial power, etc.

It is a reversed DCU. By large, things are pretty upbeat in the DCU and people are generally happy, secure and open to the wild and the novel by virtue of living in a world where good always triumphs in the end, thanks to colorful superheroes.

Meanwhile the dreary inhabitants of the antimatter world live on a planet dominated by lies, greed and hypocrisy. And if that world sounds all-too familiar, then you’re just too cynical by half… In their reality vice and corruption are a way of life and the bad guys always win.

Here crime is the founding principal of society. Evil is rewarded, cruelty is lauded. People live everywhere in fear of their masters. This goes all the way through the local mobs and the corrupt police, the bent journalists and up, through City Hall and the governments, to the top of the pyramid – the seedy Crime Syndicate of Amerika and its vicious bullying leader, Ultraman.

The CSA rules their Earth with an iron fist from their lunar headquarters, the Panopticon  (“The place of wide vision” or “watchtower”). Their motto is “Cui Bono”: Who Benefits. (Interview with Grant Morrison)

I shall become… an owl

Owlman is Thomas Wayne, older brother of Bruce Wayne. Thomas witnessed his brother and mother being shot dead. He and his father survived and blamed the elder Wayne for their deaths. Thomas Wayne Jr. became the super-criminal Owlman, siding with the nasty Boss Gordon and dedicating his life to revenge against Commissioner Wayne of the Gotham City Police Department.

Though Owlman eventually joined the world-dominating Crime Syndicate of Amerika, he always focused his empire-building efforts on Gotham City, becoming its dominant crimelord.

The CSA’s dominion was temporarily disrupted by the Justice League’s intervention on the anti-matter Earth. The JLA’s help had been requested by Alex Luthor, the only remaining free hero of the anti-matter world.

Thanks to Batman’s efforts in Gotham City, Boss Gordon was arrested and Commissioner Wayne secured the city against the Crime Syndicate’s representatives.

The CSA launched a retaliatory strike on the matter Earth as a prelude to conquest. But both teams came to realize that they could not prevail in the universes opposite their own.

The two groups then discovered that the universal crossover was part of a plot by Ultraman’s servant Brainiac. Brainiac had secretly engineered the confrontation to regain his freedom and expand the power of his consciousness.

The latter goal required Brainiac to take actions that would have destroyed both Earths. Working with the JLA, the CSA was able to return to their Earth, after which they took their revenge against their rebellious servant by lobotomizing him.

Owlman was actually delighted by the turn of events in Gotham, as it restored the thrill of the “old days” when he was the underdog in his battles against the GCPD.

Owlman, Ultraman, and Superwoman later showed up in Metropolis chasing a Superbaby. The “baby” actually was the Brainiac from the anti-matter universe. Brainiac had created the fetus from Ultraman’s cells and projected his mind into it.

The trio managed to kill the Brainiac baby despite Superman’s efforts to stop them and then returned to their home universe. (Adventures of Superman #603-5)

Seeking to discover what had happened and to prevent it from occurring again, the CSA returned to the matter Earth. Their initial mission was satisfied when they found out that Krona was responsible but had been neutralized by the JLA.

Change in the rules

However, the CSA had also discovered that the imbalance between the universes had been eliminated by the restructuring and they began a reign of terror on the matter Earth.

The Qwardians eventually quit the field of battle against the two supergroups and the CSA sent the JLA back to the matter Earth, bitterly aware that they owed the heroes a favor.

With that resolved, the CSA began the arduous work of restoring order on the anti-matter Earth. Their public humiliations during their battles with the JLA and the Qwardians had caused:

Furthermore, another Qwardian fleet was headed toward their planet (JLA: Syndicate Rules).

Thomas Wayne, Jr. is tall, muscular Caucasian male. His features are difficult to discern under the mask, but he most likely has the square-jawed handsome look typical to the men of the Wayne family.

Owlman’s costume is a bluish-gray body suit-with-cowl with metallic-gray equipment bandoliers on his wrists, ankles, and waist. He wears a cape made of strips of a thick light-gray fabric, which overlap to give the cape a feathery texture.

Both his cape and his equipment belt are clasped in the front with silvery oval buckles. The buckles are embossed with a simple owl design, an oblique v for the beak with circles at the tips of the v for eyes (o-v-o).

Owlman wears a metallic-gray helmet with a reinforced chinstrap. The helmet has upswept side panels giving the helm the silhouette of an owl and chrome-mirrored fish-eye lenses cover the eyes.

Owlman is dedicated to the continual humiliation of his father, GCPD Commissioner Thomas Wayne, Sr. for “allowing” Martha and Bruce Wayne to be killed. It’s likely that the only reason Commissioner Wayne is still alive is that Owlman doesn’t want the humiliation to end.

As far as can be discerned, Owlman’s sole reason for joining the CSA was to maintain the power and influence necessary to maintain Gotham City as his domain alone.

Owlman’s hatred of his father is so complete that when he discovered that Thomas Wayne Sr. was dead on the matter-universe Earth he lost all interest in remaining there: “…(N)othing means anything. He’s DEAD. There’s no one left to hurt.”

Owlman is also characterized by his compulsion to take risks. This is not surprising, given that most people with survivor’s guilt suffer this trait. It is also common in people seeking revenge on their families — by risking themselves, they distress their loved ones. The compulsion is not an overpowering one, though, being limited mostly to taunting his enemies.

Common examples include casually asking policemen how they wish to die as they hold him at gunpoint and goading Ultraman, most notably by making out with Superwoman. Once the CSA had taken over the entire world, Owlman began fostering rebellion in limited places. He worked carefully to create insurrectionist groups that would make an entertaining battle without truly endangering the CSA’s power.

“Ultraman got one of you Martians once. I knew it couldn’t be that hard.”

“We’ll conquer this planet, raze its cities, and reduce it to ash. For a start.”

Bonuses and Limitations:
Superspeed can only be used to reduce the time of mental tasks (designing gadgets, etc.).

By Jeff Baker and Roy Cowan. 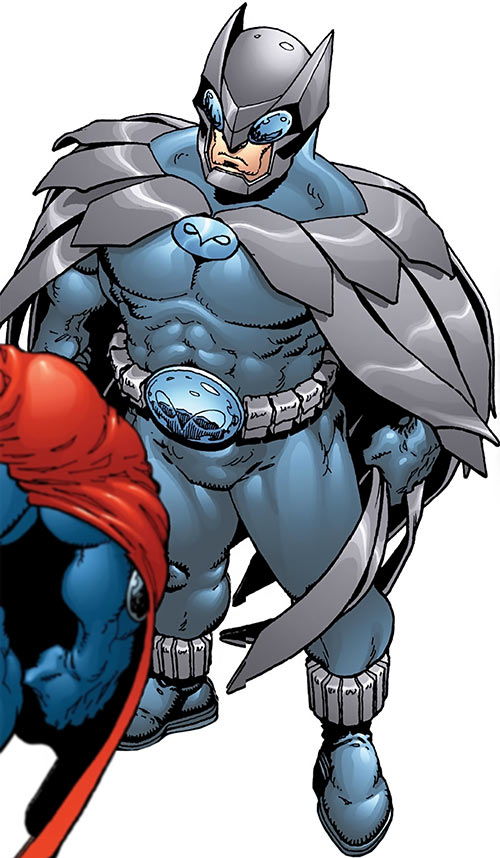 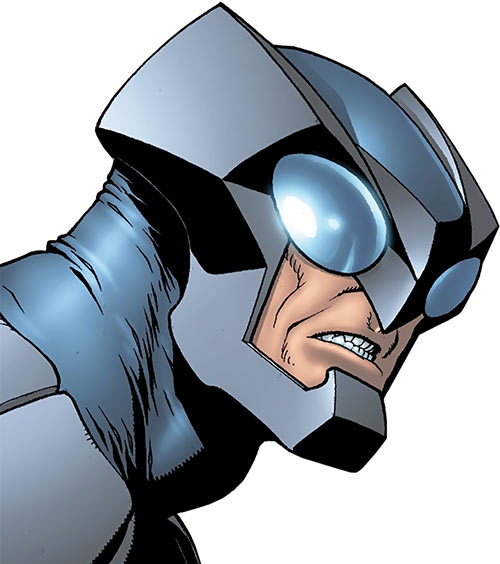 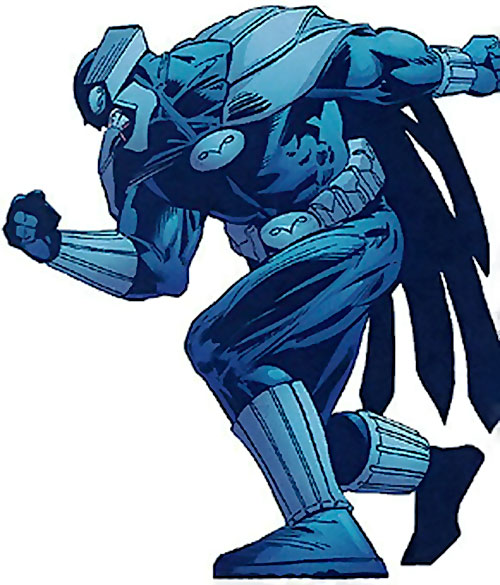 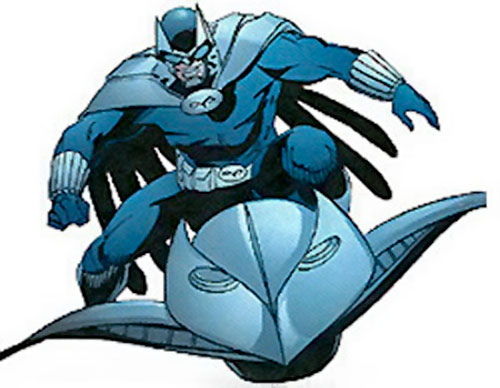