Pagan is well-trained in the martial arts and acrobatics.

She’s also a competent vehicles operator, including all sorts of cars, motorbikes and power boats.

Her frontal high kicks are particularly impressive. She actually can hit her shoulder with her shin.

Marian Mercer’s story stems from the death of her sister, Sondra. When Sondra was 17, she ran into two wealthy Gotham yuppies – presumably during a night of revelry, as she had been drinking. The situation degenerated, and Sondra Mercer was severely beaten by the two men.

Despite their modest wealth, the Mercers attempted to bring the matter before justice as their daughter could identify her aggressors. It didn’t work. There was no solid proof and the predators could afford much superior legal representation.

At that point, Sondra Mercer was already in a dire psychological state, suffering from a phobia of men so severe that she couldn’t let even her own father approach her. Within days of the verdict, she committed suicide.

The Mercers never recovered from this tragedy. Sondra’s sister Marian, in particular, went slightly crazy and did the Gotham thing. She became a Gotham vigilante under the handle Pagan. The name was meant to symbolise her rejection of the rules of society. Obviously very affected by the death of her sister, Pagan declared that Marian Mercer had died along with Sondra and that she would only be Pagan now.

It is possible that Marian also had very bad experience with men prior to what happened to her sister.

Marian Mercer will have her revenge on Gotham

As it happened, the apartment building in which Mercer lived was scheduled for demolition. She clandestinely remained behind, training in hand-to-hand combat. From there she planned he abduction, torture and execution of the men who had beaten her sister. She intended to then continue to prey on men ruining the lives of women.

From her level of fitness and her dialogue, one gets the impression that Marian Mercer was already trained in gymnastics, combat sports (perhaps tae kwon do) and possibly dancing. If this is true, she presumably trained intensively for weeks to adapt martial techniques intended for competitive sports to street-fighting. 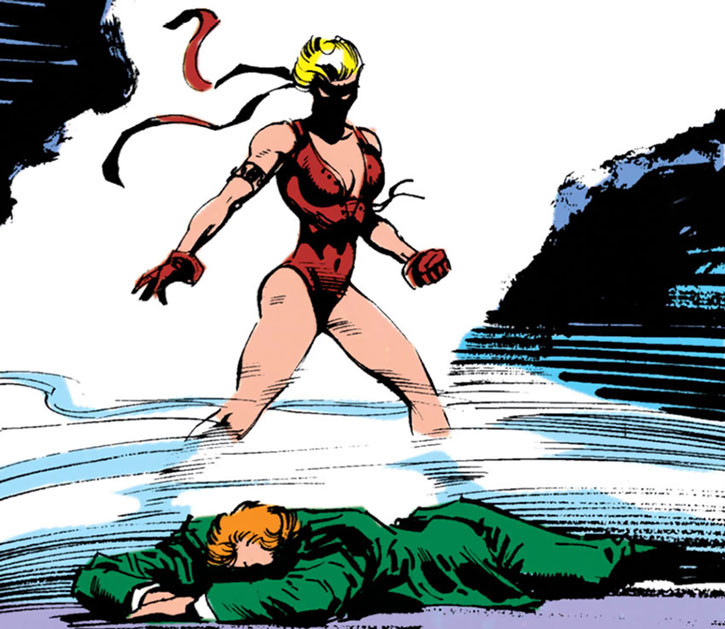 Mercer then kidnapped Robert Buick, the first of the two men. She beat him and tortured him for a week, leaving him among the trash for the police to find. But it was actually Batman who found Buick, but the young banker refused to say anything.

Knowing that something that afoot, Batman spied Buick calling the other man, Peter Langan. He arrived too late, though. Driving an old pickup truck, Pagan rammed Langan’s car off the road, beat him up and kidnapped him. The revenge-crazed Pagan took Lagan to her abandoned building. She beat him up again to make him experience what her sister had been through.

Batman tracked her down within hours, and Pagan soon realised that she couldn’t overcome him. Using a pre-placed line, she crashed through a window and rappelled down the street. However, Batman had sabotaged her getaway motorbike. As a result, Pagan was knocked unconscious and arrested.

During Marian Mercer’s trial, the jury was sympathetic. She was acquitted – presumably reflecting the Gothamites’s anger at the level of unpunished violence in their town. Since Batman also was sympathetic toward Mercer, it is possible that he had his lawyer, Rachel Green, represent her.

Presumably, Wayne had investigated and rapidly determined that Marian Mercer’s account of Sondra Mercer’s death was truthful. Batman’s open-minded attitude toward Pagan generally gave the impression that he was empathetic toward her pain and anger. He likely found in those a reflection of his own childhood trauma.

Recovering some faith in the judicial system, Pagan cooled down somewhat. She adopted more reasonable views about society and men. She was determined to keep working as a street vigilante, though, coldly beating up men who preyed on women.

Pagan started investigating a new serial killer in Gotham, intending to avenge the female victims. She was approached by Batman, who suggested that they pair up to stop the killer more quickly. Though Mercer was wary that it was some kind of chauvinistic jab at her, her chief concern was to stop the killer. Thus, she agreed.

As it turned out, the serial killer was actually a powerful alien monster. It was one of the “parasites” that attacked Earth during the Bloodlines crisis .

Pagan helped Batman fight back the parasite, but it was clear that they were outmatched even working together. Thankfully they managed to save one of the parasite’s victims, the amateur vigilante Joe Public – who discovered that he now had super-powers as a rare consequence of the alien attack. Joe Public repelled the monster, saving everyone.

Batman and Pagan took the persons who had survived the alien’s rampage to the nearest hospital.

In 2003, Pagan was spotted among the Arkham Asylum inmates. She was busy fighting superhuman zombies invading from the basement.

Marian Mercer is a gorgeous woman, at once very curvaceous and well-muscled – with strong shoulders and a fine waist. She chooses to dress in revealing clothing – which evokes a dancing outfit, hence the notion that she may have been a dancer before. From what she said, she dresses this way to aggressively affirm that she’s free from the weight of male gaze and does whatever she wants.

In practice, exposing her spectacular body certainly had a distracting effect. It leads her lecherous victims into completely misread what she is about to do to them.

The sort of person she hunts will also often assume from her clothing that she’s a prostitute. Presumably in the DC universe some streetwalkers adopt elements of super-hero costumes as part of their work clothes, such as domino masks, to appeal to certain fantasies.

On the cover’s Pagan outfit included leggings, though in the story her legs were bare.

After Sondra’s suicide, Marian was consumed by her thirst for vengeance. She didn’t just want to break Buick and Lagan just like they had broken her sister. She intended to carry on after that. Her general plan was to essentially become a terrorist, savaging men to keep the rest in line through fear.

Pagan had a seemingly bottomless amount of aggression to work through. She doggedly beat her first victim hour after hour, day after day for an entire week with her bare hands and feet.

The jury’s decision apparently led her to reconsider her rage-filled rejection of society, and to accept that the system that had failed her sister could also work sometimes. Though she remained a violent vigilante, she regained her rationality. Pagan was now specifically targeting men abusing women, beating them up to teach them a lesson.

She still neither kills nor maims. She sees herself more like instant karma, submitting predators to what their victims endured. She makes them experience what it is to be powerless and in the hands of a stronger, more aggressive person with power over one’s life and death.

Mercer’s violent misandry likewise cooled down. She is very distrusting of men and has all sorts of uncharitable a priori about them, but warily agreed to work with Batman in the interest of justice. She’s very, very touchy about anything that implies a patronising, superior attitude from a male toward a female. But her aggressiveness in that area normally remains verbal.

“My name is Pagan. And your kind can show me nothing at all.”

“Beg ? That must be hard for such a macho man, Peter ! Not very nice when someone makes *you* plead, is it ? Makes you sick when you realise they have all the power and you have none, doesn’t it ? Especially when they ignore your pleas !” (kick to the head)

“Butt out, Batman. Pagan doesn’t need any man to fight her battles !”

“If you think I’m staying put like a good little girl, you have another thing coming.”

Advantages:
Headquarters (Confined – she has ample space but it’s empty).

Equipment:
Carries a small knife, but doesn’t use it in combat.

The new female power and how to use it

The statistics above are for Pagan during her first appearance. By her second appearance, she was a more seasoned vigilante, and her Martial Artist Skill had increased to 06. She also seemed stronger, but not enough to warrant an additional AP of STR. Also, she trained to acquire Weaponry (Thrown weapons): 06.

Her SID also dropped in severity, becoming a MID. She also armed herself with a bola, presumably kept wrapped around her waist when not in use.

The new female power and how to use it

The statistics above are for Pagan during her first appearance. By her second appearance, she was a more seasoned vigilante. Her Strength and Fighting have both improved by one Rank, and she has learned Power Attack, Equipment 1 and Ranged Combat (Thrown Weapons) 6 (+9). This increases her Attack/Effect PL to 6 (Unarmed +9, Close, Damage 2), her Parry/Toughness to 7, and her point total to 68 (equiv. PL 5).

The Equipment is a steel cable bola, presumably kept wrapped around her waist when not in use. It has Snare 4 but is Limited (she only carries one, though it often can be recovered and reused). 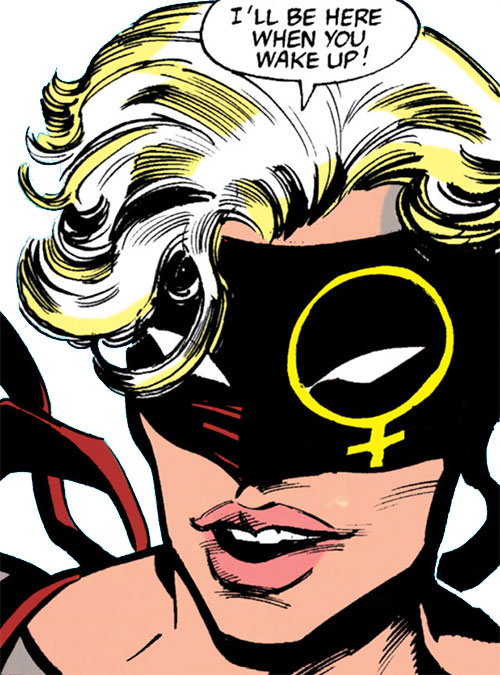 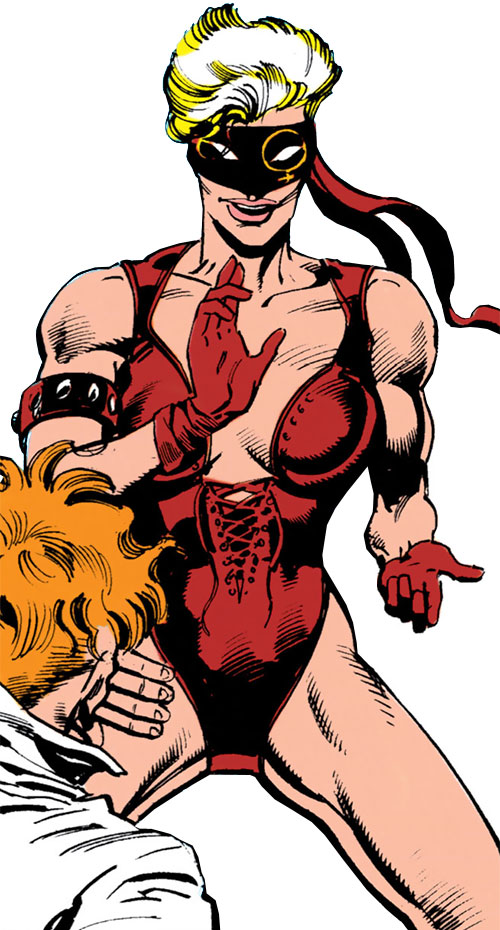 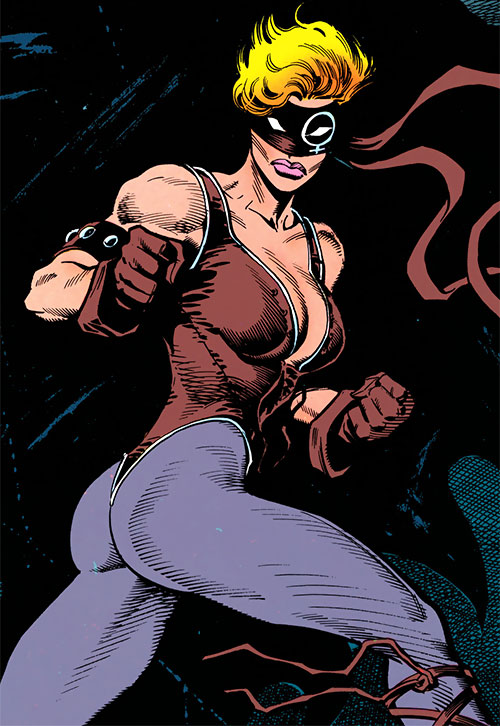