He fights with the traditional Italian fencing array – rapier and dagger.

Pagliacci is “a post-human thrillkiller with a body count in the triple digits”.

This serial killer was one of the deadly villains assembled by Lord Defile to discuss an alliance. This was the meeting that accidentally turned into the worst massacre in New York City’s history.

During the battle, Pagliacci broke into the triage centre the NYPD had improvised in a nearby nightclub. He started killing the medical and paramedical personnel and finishing the wounded and dying. Which is when he ran into Officer Doran, who was bringing in the unconscious Fahrenheit.

Amazingly, the cop managed to take out Pagliacci. The preternaturally dangerous killer was likely arrested.

He wears the costume of the pagliaccio character, sometimes called “the white clown”. He styles himself as a comedia dell’arte  character.

He also moves like some sort of weird, super-acrobatic mime with a very odd body language.

Pagliacci is an utter, monstrous psychopath. He seems to chiefly live to kill people and rake in the highest possible bodycount. 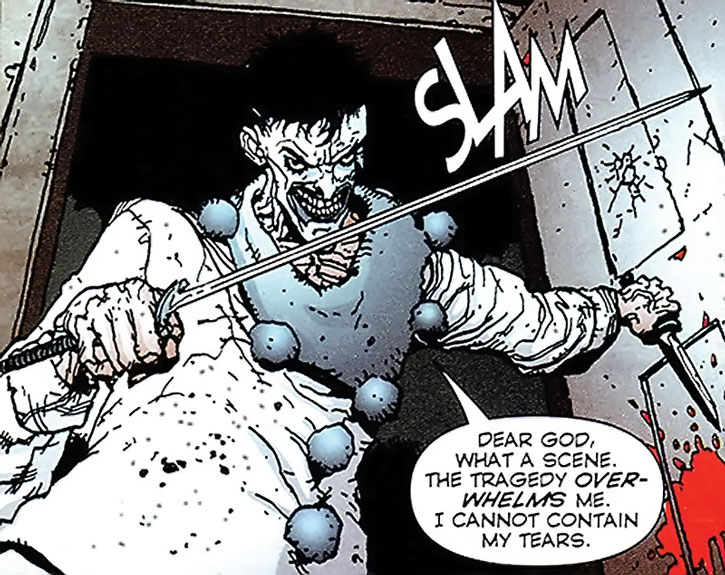 Personality-wise he acts like if he were some sort of great opera singer. He will rant about his “art” and hates it when there is noise distracting him from his “performance” of mass murder.

As a sort of weird, sinister comedia type, he occasionally delivers lines from some tragic play in a sarcastic tone, to mock the suffering and death around him.

He seems completely dissociated from the world and to treat it like some kind of surreal Grand Guignol .

(Sarcastically, after invading a field hospital to finish off the wounded) “Dear god, what a scene. The tragedy overwhelms me. I cannot contain my tears. So many brave hearts that will no longer beat. So many brave voices silenced forever…”

Bonuses and Limitations:
Pagliacci’s DEX and Acrobatics are considered to be Powers. 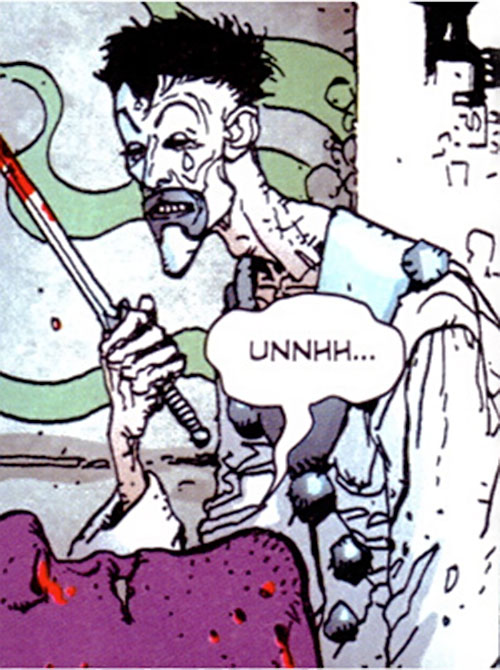