Painkiller has the metahuman power to anesthetize his victims. He can also rob targets of their senses.

These two abilities combined with his great strength and skill with many hand-to hand weapons make him a very effective assassin.

He has been shown using his powers on a large scale. Painkiller caused an entire police strike force to fall to the ground helpless around him as he calmly walked away.

Painkiller was high-level mob enforcer loaned to the Brothers Who Rule, a gang in the Brick City. The BWR was getting hammered by Black Lightning and needed Painkiller to stop him.

After observing Black Lighting for a while to get familiar with his modus operandi, Painkiller developed a plan to kill Black Lightning and humiliate the local police.

Painkiller set up a fake crack house with minimal drugs and a few expendable BWR teenagers. His plan was to lure Black Lightning in and call in the cops. In the ensuing fracas Black Lighting would be killed and the youths would be shot down as well, smearing the cops as child-killers.

Painkiller’s plan did not go down as he had hoped. Black Lightning’s abilities gave him some small protection from Painkiller’s powers. Furthermore, Lightning’s quick thinking averted a police massacre.

The leader of the Brothers Who Rule later proclaimed Painkiller had been murdered.

But given his previous exaggerated propaganda, it is quite possible Painkiller was simply incapacitated. If so he likely was shipped off to a metahuman holding facility such as Belle Reve.

Painkiller is an extremely large Black man. His eyes have no pupils: they are solid white.

His hair is pulled back in long braids, at the end of each of which is a small knife. Painkiller uses these as a weapon by simply swinging his head side to side.

His costume contains many weapons, including numerous:

Painkiller also has a tattoo on his left upper arm with a ℞ symbol (as in “prescription”) and a small skull.

Painkiller makes great use of the American societal assumption that big Black guys are stupid. Opponents may underestimate his intelligence…until it is too late. He is very bright, very observant, and very well spoken.

He will always study his opponents from a distance first if possible. He wants to learn their strengths and weaknesses. He is a cruel killer who has no problem with disposing with his enemies in very painful ways.

When things are going poorly, however, Painkiller can slip into a psychopathic rage. At this point he tends to leave himself open to attack by fighting physically and not making good use of his powers. This is how Black Lightning was able to defeat him so easily.

As he thrashes Black Lightning: “You see, you’ve lost the advantage of being the only meta-human in this provincial town, and I wonder if you’ll even be able to deduce the nature of my powers before I *kill* you.”

Youth: “You — you made it so our legs don’t work. What’s up with that ?”
Painkiller: “Well, there was always the possibility the police would fail to slaughter you according to my plan and I didn’t want to have to chase you all over the house so I could kill you myself.”
Youth: “…You can’t do us like that ! We claimin’ family !”
Painkiller: “Ah, the young. So trusting. You make such perfect martyrs.” 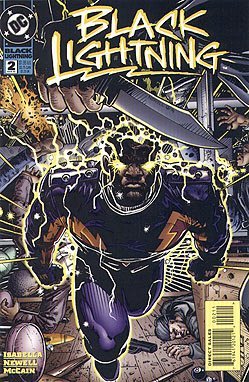 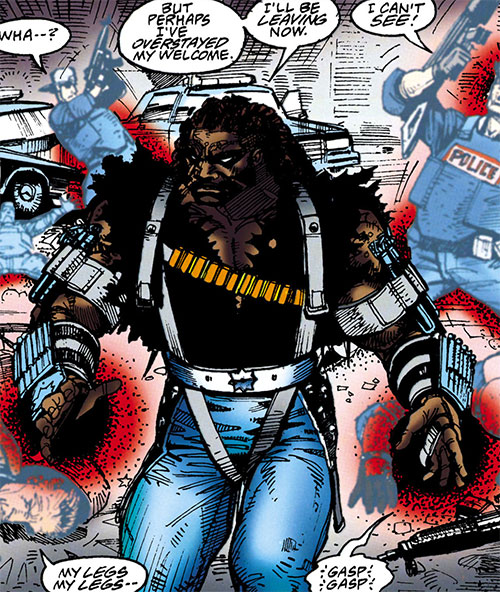